Those gunning for an executive condominium (EC) unit would’ve heard of the highly anticipated Piermont Grand in Punggol. As the only EC launch in 2019, the Sumang Walk EC plot was literally hot property, receiving an overwhelming 17 tenders before CDL Constellation and TID Residential eventually won the bid at $509.37 million.

That’s a pretty shocking sum — record-breaking, actually — considering it’s for a development in the godforsaken land of Punggol. (Don’t flame me for saying that, I actually live there, so I know.)

Should you consider Piermont Grand for your next home? Is it worth the money? Let’s find out.

In case you’re unfamiliar, let me give you a quick and dirty rundown of what executive condos are. ECs are basically a HDB-private hybrid, designed for the sandwich class of Singaporeans.

Although built by private developers (who build private condos), the development will first be sold via HDB. There is a $16,000 income ceiling (from 11 Sep 2019), and buyers are eligible for CPF housing grants of up to $30,000.

After the 5-year minimum occupation period (MOP), the development can be sold like private property. In 10 years, it actually becomes private property. For further reading, read our Step-by-Step Guide to Buying an Executive Condo (EC) Unit in Singapore.

Piermont Grand is an EC. Generally, it’s expected to be quite an “atas” development, not just because of its record-high bid prices, but also because it’s being built by subsidiaries of the renowned developer CDL (City Developments Ltd).

According to Piermont Grand developers, their prices are really competitive because “new launches in the area are already selling at $1,400 to $1,500 psf”… I’m not sure which developments exactly they’re comparing against, but it’s probably other private condos.

From what I’ve read and researched, $1,100 psf seems pretty pricey for an EC.

So what do you get for that hefty price tag? Aside from bragging rights, that is.

The luxe look and feel of a real condo, for starters: the main entrance will have what they call “The Cascades”, which are dramatic, cascading water features that welcome you home.

There will also be 4 swimming pools, 4 barbecue pits, a yoga deck, a gymnasium and a tennis court, among other facilities.

The good thing is that like most ECs and condos, the apartment will come partially furnished as well, so you can probably save a lot on renovation. It should be almost move-in-ready, with air conditioners, wardrobes, flooring and full kitchen cabinets.

The kitchens (4- and 5-bedroom units) will come with quartz counter tops, as well as a Teka cooker hood, hob and oven. The bathrooms will also be fitted with fancy Rigel and Grohe wares, which is a nice touch.

Additionally, if you’re into the whole smart home thing, the Piermont Grand apartments will come with a wireless smart home system for controlling the home appliances and booking condo facilities.

According to several property sites (like esingaporeproperty.sg and kaiproperty.com), the estimated maintenance fees are $264 for 3-bedroom units and $308 for 4- and 5-bedroom units. That’s quite average, but I kind of expected lower since the maintenance costs are split between 820 units.

Punggol has an infamous reputation for being the ulu district that’s always “developing”, yet never developed. The Punggol 21 plan to develop Punggol was announced in 1996, but today — over 20 years on — the place is still pretty much a ghost town.

But if you had to pick a place in Punggol, Piermont Grand is quite central.

How near is the Sumang Walk EC to Punggol MRT?

The EC is within walking distance of the Punggol MRT, and is next to Sumang LRT. Google maps says it’s 1.2km away and will take 15 minutes, but that’s only if you walk along the main roads. 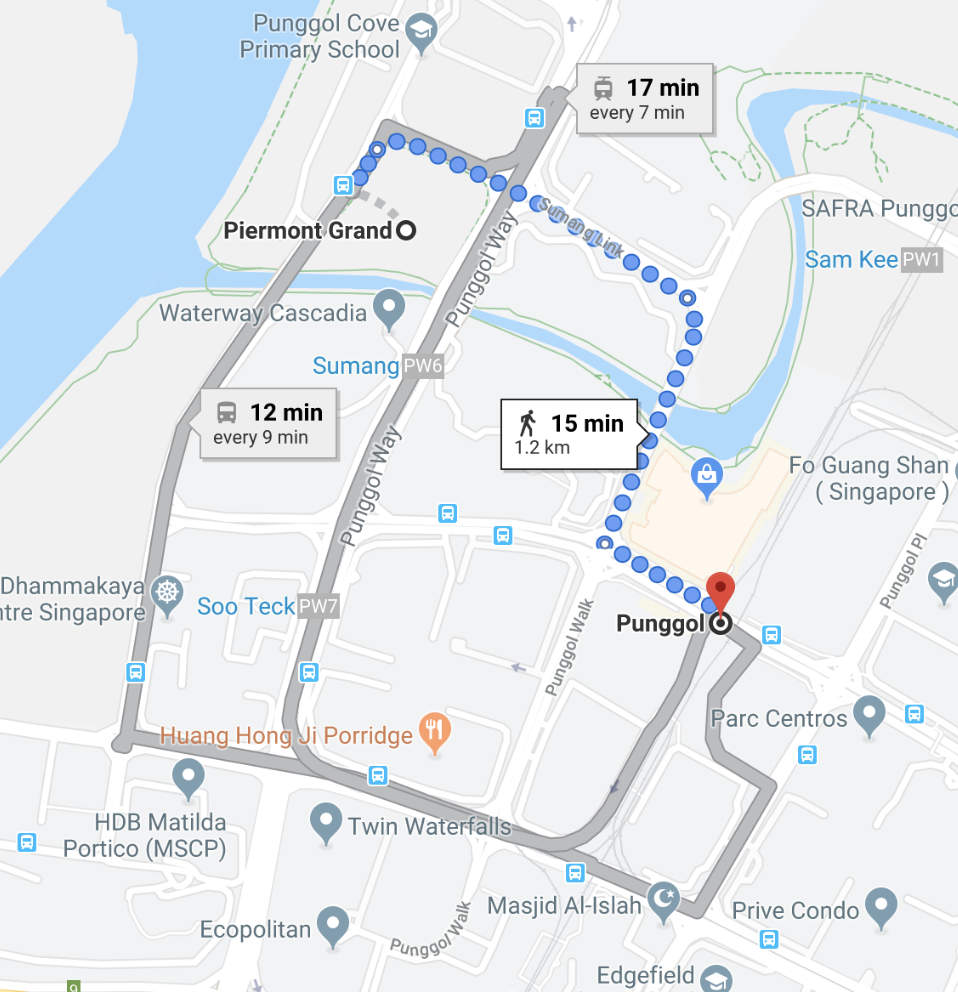 If you use the park connectors along the waterway, you could probably half the travelling time and distance.

Are there any nearby supermarkets?

There are quite a few supermarkets nearby, which is great. If you don’t like jostling with crowds at the NTUC Fairprice Finest at Waterway Point, you can swing by the nearby U Stars or Sheng Siong for your groceries. 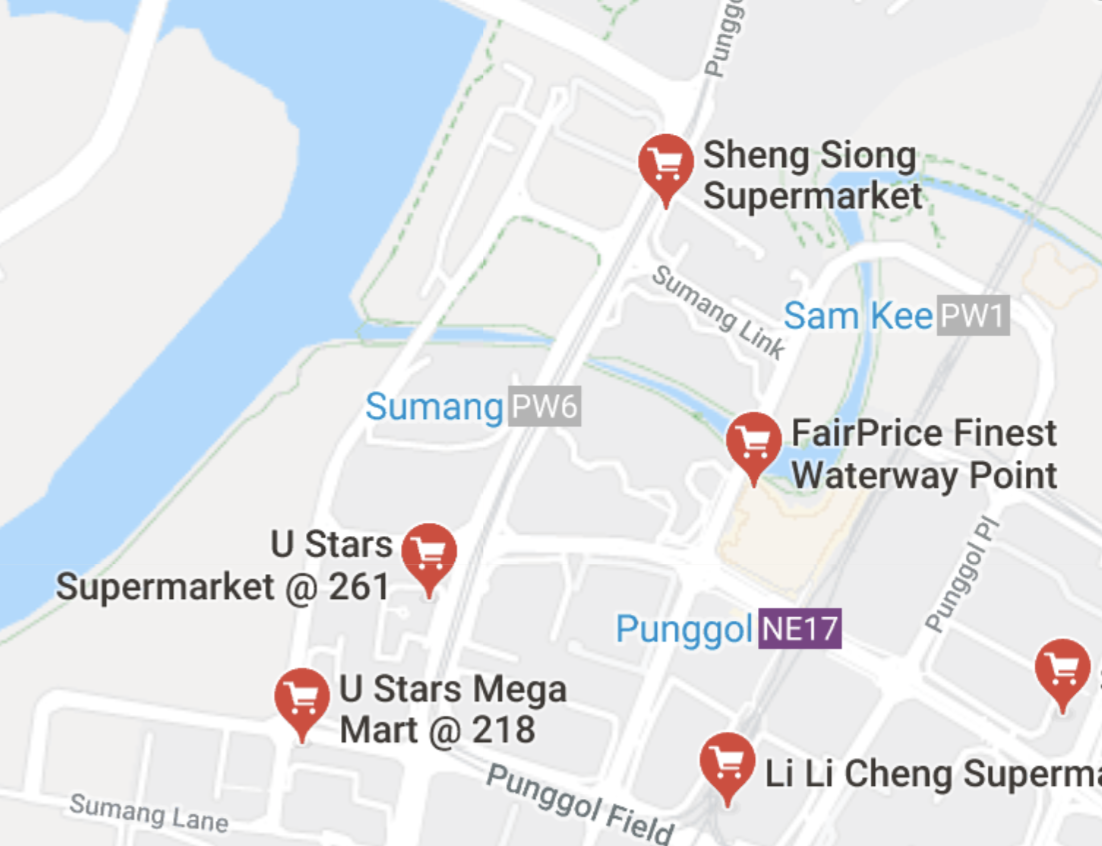 What about nearby schools?

If you’re looking for branded, elite schools, sorry, there are none in the area. You’d need to move to the west for that. There are quite a few primary and secondary schools nearby though. 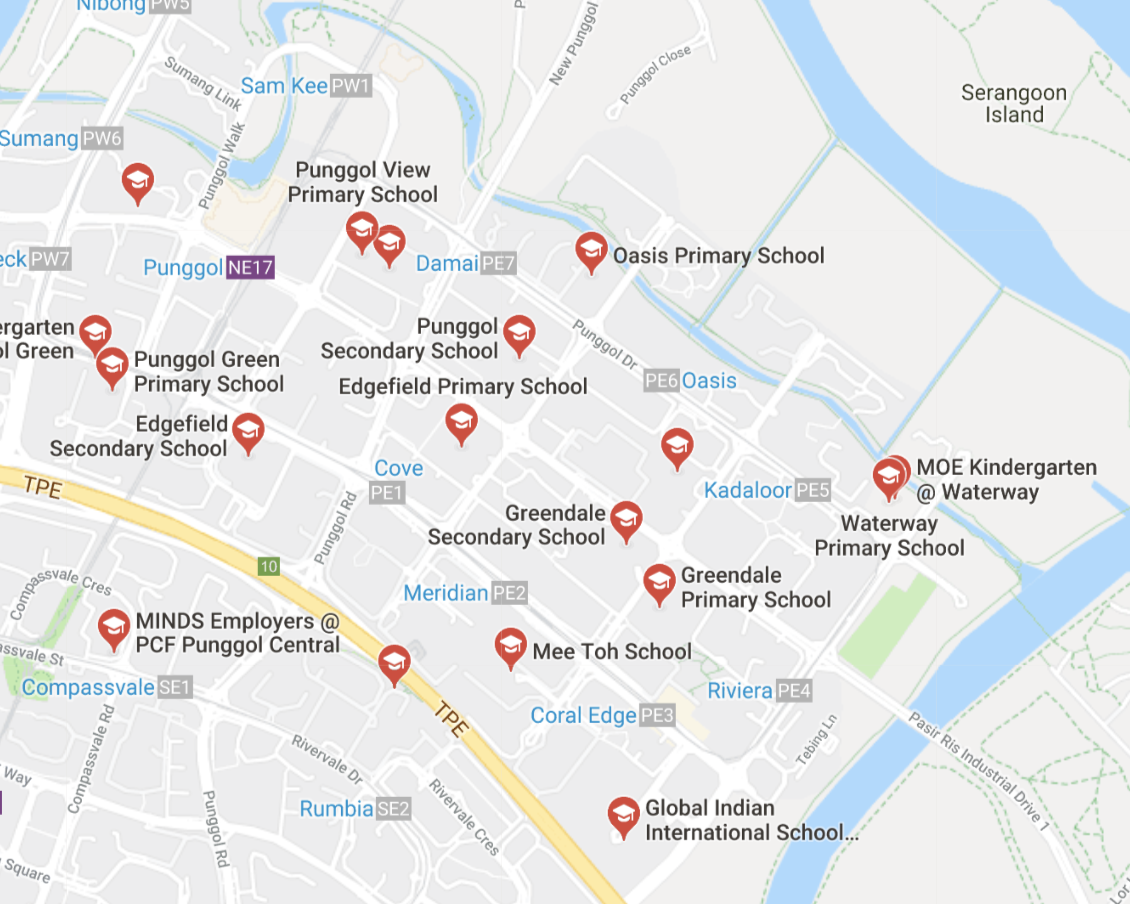 The official website lists Nan Chiau High School as one of the schools in the vicinity, but if you checked your map… you’d know it’s bluff one. It’s actually 3.2km away, in Sengkang.

Getting from Piermont Grand to Orchard and the CBD

If you need to go downtown, you’d be surprised that the North-East Line is actually very efficient.

It takes about 27 minutes to get from Punggol MRT to Dhoby Ghaut MRT, 38 minutes to Orchard MRT and 39 minutes to Raffles Place MRT.

Getting from Piermont Grand to Changi Airport

The one thing good about living in the northeastern part of Singapore is that it’s relatively close to Changi Airport. It would be lame to bring up if Changi Airport was only for, you know, flying overseas, but now that Jewel Changi Airport is fully up and running, the place is popular even as a shopping mall. 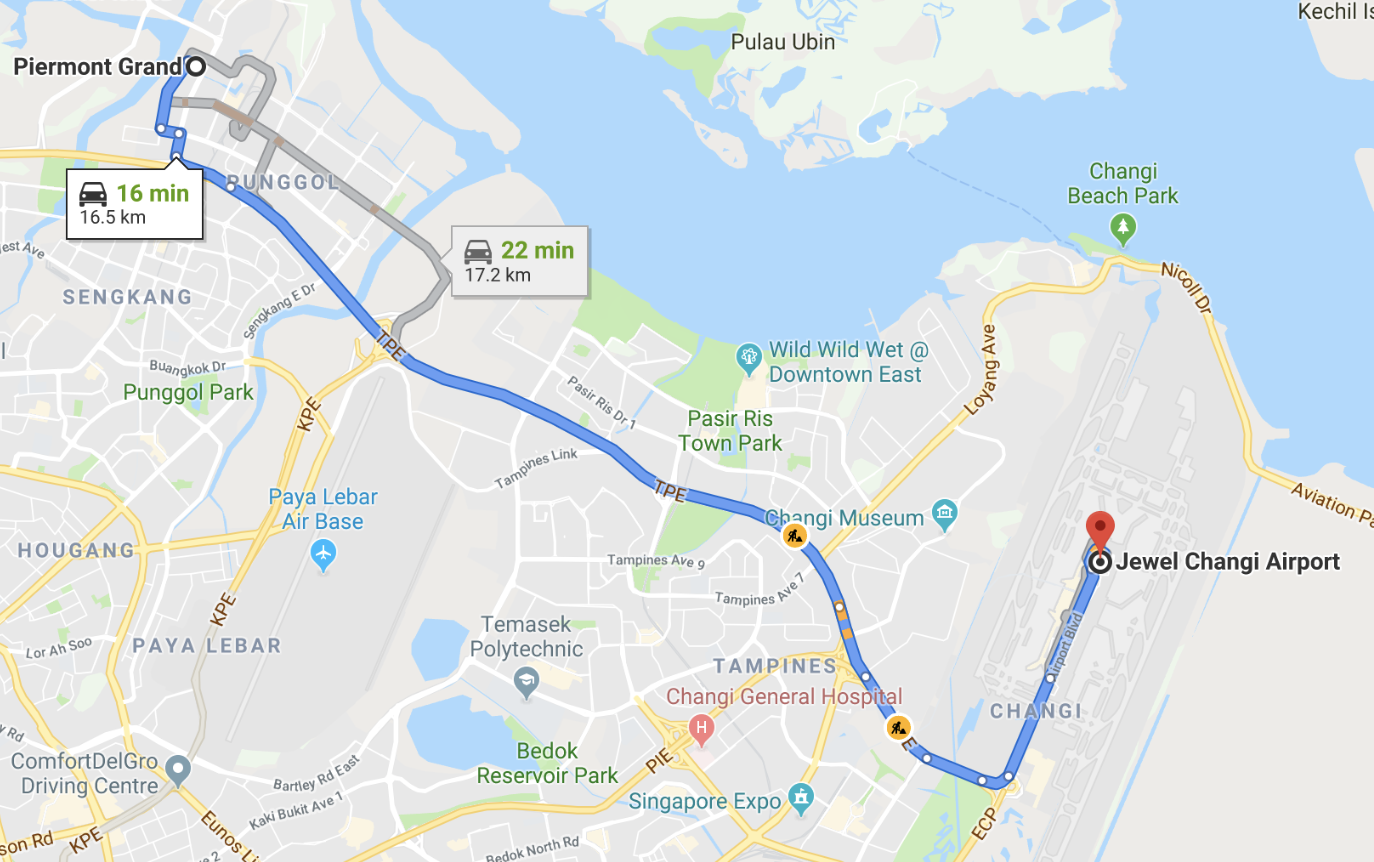 Piermont Grand is literally next to the TPE entrance, so it’s just a 16-minute drive away.

Personally, I don’t think there’s anything that special about Piermont Grand, other than the branded developer CDL, of course. I believe that this project is targeted at the more affluent crowd — rather than the price-conscious, first-time buyers — because it doesn’t seem cheap.

If it indeed sells for $1,100 psf and up, I think it’s way too expensive for its specs. Sure, there are tons of family-friendly facilities and it will no doubt feature stunning interiors and a beautiful facade. But I’m not sure that justifies the price tag for an apartment in this district.

With a budget of $900,000 and up, you can probably get a bigger place at a better location: 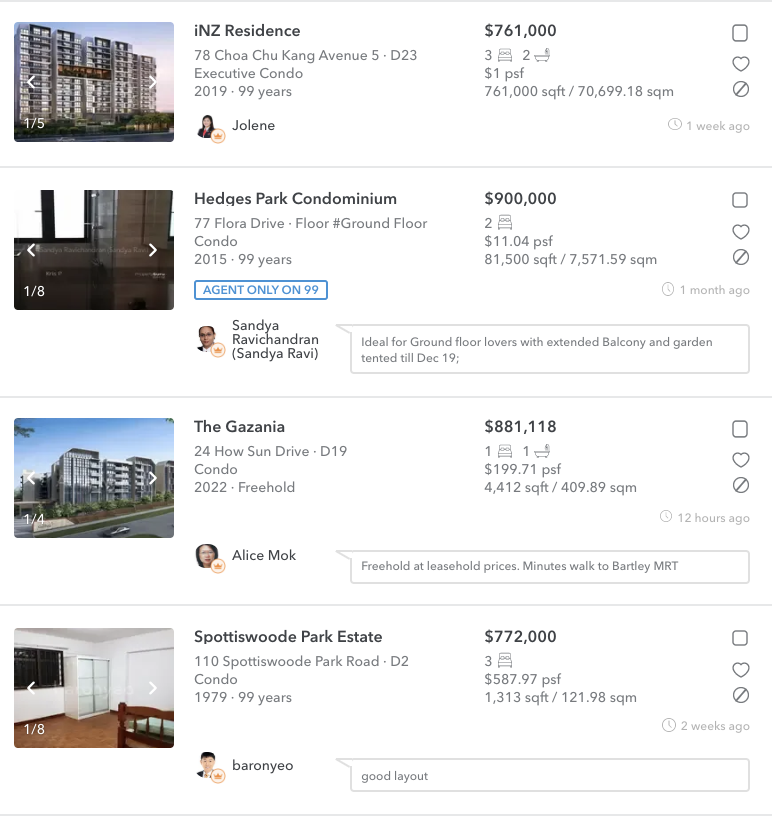 The nearby Prive’s prices may have gone up by 1.5X since its 2013 launch, which is crazy, but I’m don’t know if Piermont Grand will be as good an investment —in fact, I’m skeptical that anyone would pay 2 to 3 million for it in 5 years.

With that kind of money, you could probably afford a “real” condo, or even a landed home in the quieter districts.

Located at Sumang Walk, the biggest selling point of Piermont Grand seems to be the waterway view it faces. But the waterway is in fact, a canal, so you can say it’s more “long kang” than “waterfront” living lah.

If the view is solely what you’re after, you’re better off getting one of the HDBs in the area — they’re way cheaper, and some actually face the Punggol reservoir.

Piermont Grand seems to me one of those status buys, where you’re really actually paying for prestige, not much else.

What do you think, would you consider getting a place at Piermont Grand? Tell us why in the comments below.

How To Choose Your Home Loan Singapore: 5 Important Factors To Consider Before Deciding