While you were busy grieving for iconic 90’s shopping malls like Queensway Shopping Centre and Sim Lim Square, you might have missed the news that People’s Park Complex and People’s Park Centre are on the chopping block too.

The two “People’s Parks”, which are both halfway into their 99-year leases, are on the market for en bloc sale now. Neither has been sold yet, but it’s really only a matter of time.

Sometimes I hear people refer to “People’s Park” as a location, but actually there are at least 3 buildings with that name. They are all clustered together so it’s almost as good as one mega-complex. Nonetheless, there are key differences in what you’ll find at each one.

People’s Park Complex 珍珠坊: With its distinctive green-and-yellow architecture, People’s Park Complex is the building that has made it into a million hipster selfies. This old mall is filled mostly with travel agencies, but it has an entire floor of cheap massage parlours. 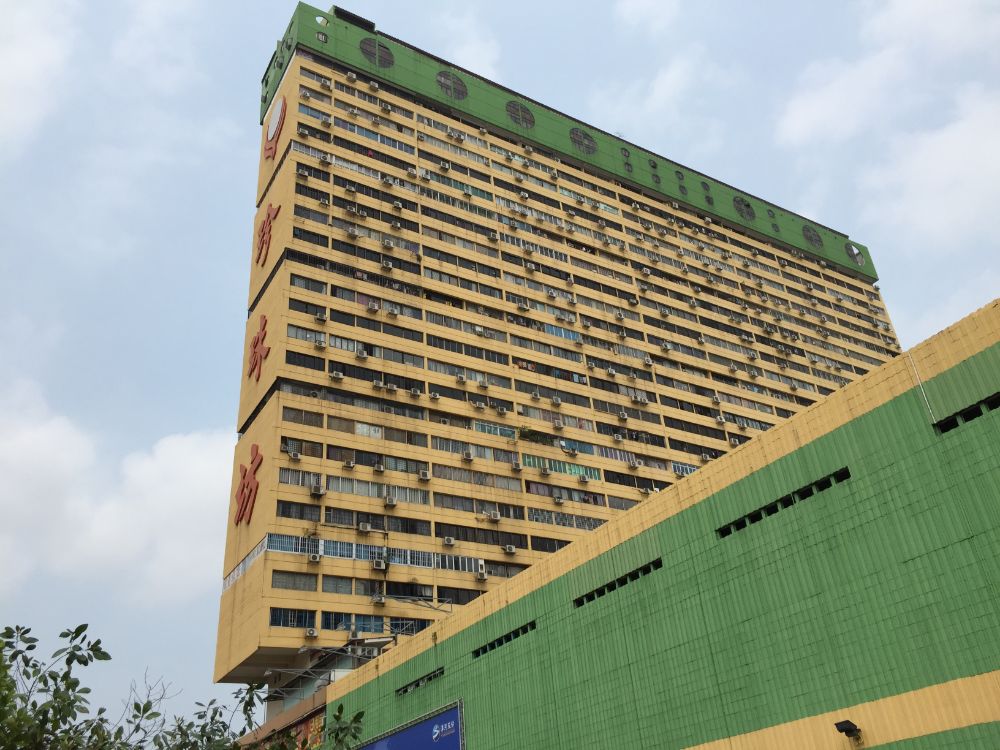 People’s Park Centre 珍珠大厦: A cavernous old shopping centre linked to People’s Park Complex. This air-conditioned mall has a food court in the basement and tons of stalls, making it one of the most popular lunchtime haunts among CBD workers. 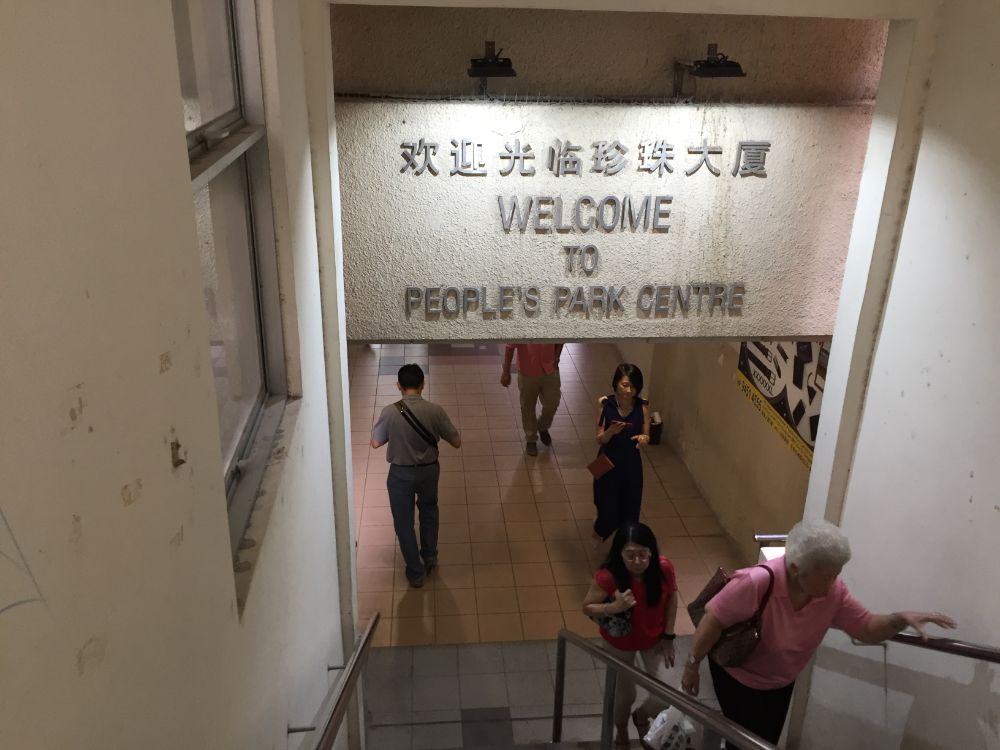 People’s Park Food Centre 珍珠百貨商場: An old hawker centre (not up for en bloc sale) sandwiched in between the two “People’s Parks”. Plenty of cheap and good food, plus lots of amazing finds in the upper levels. 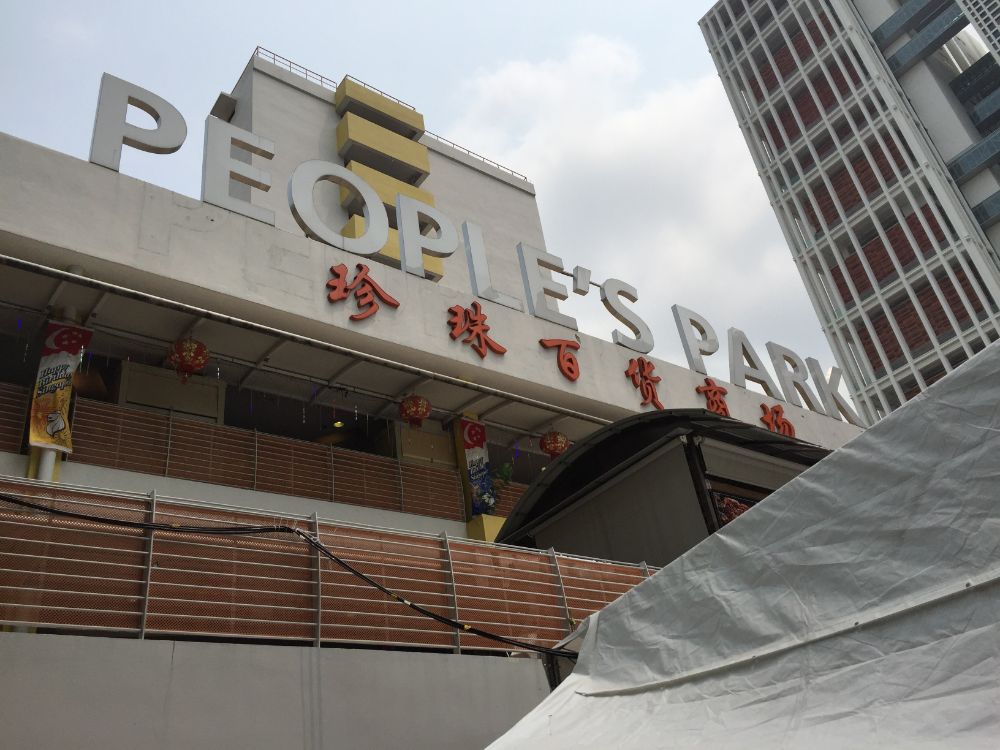 Most of the crowd you’ll see in the People’s Park area are there with one item on their agenda: FOOD.

People’s Park Food Centre is best known for Ri Ri Hong Ma La Xiang Guo, one of the most affordable ma la xiang guo places in town. Of course, how affordable it is depends on how much meat or seafood you choose, but portions are generally large. You can expect to spend about $15 for a hearty meal for 2.

Apart from ma la, this hawker centre also has numerous other central Chinese (e.g. Sichuan, Chongqing) cuisine options here alongside the more local dishes. I’m no food expert so I will point you to CityNomads and Eatbook for their lists of what to eat here. 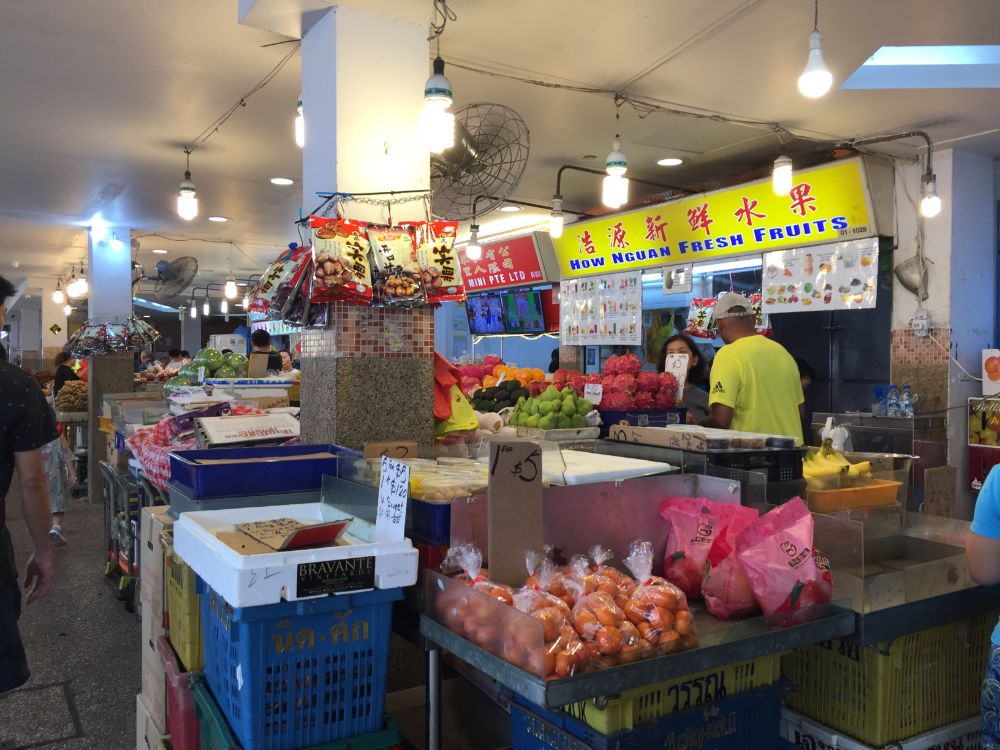 Of course, it’s cheaper to eat at the hawker centre, but if we’re purely comparing between air-conditioned malls, the food at People’s Park Centre is considerably cheaper than the more commercialised Chinatown Point across the street. 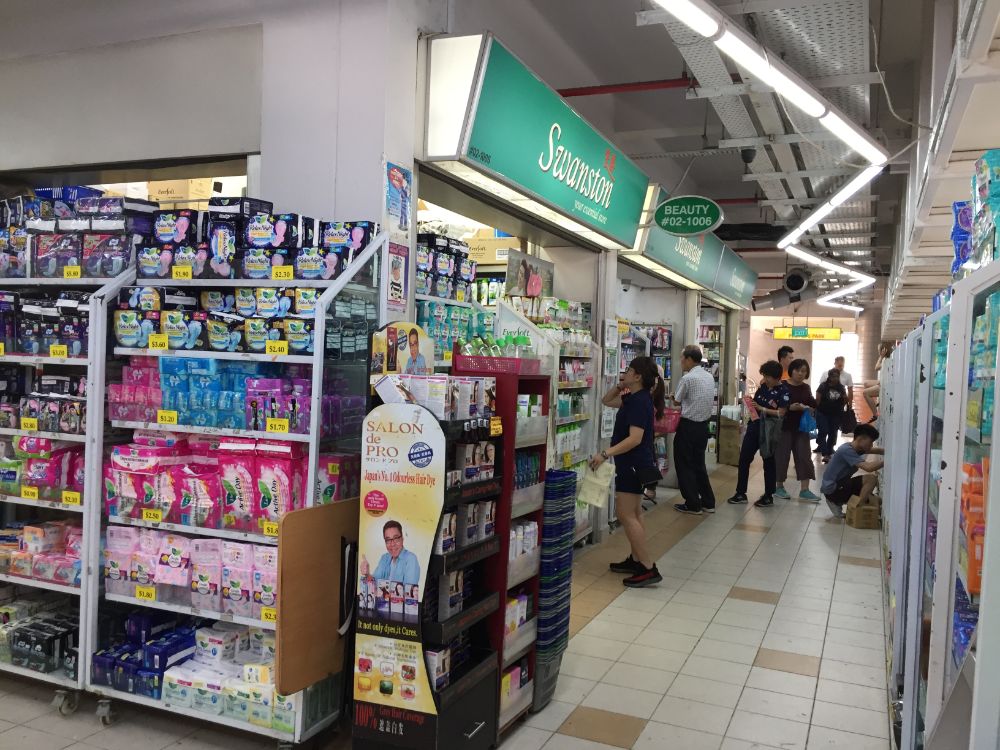 One trick that every thrifty Singaporean grandma knows is to buy household toiletries from the upstairs bit of People’s Park Food Centre.

There are two cheap toiletries shops here: Swanston on level 2 and Ocean Cosmetics on level 3. From menstrual pads to shampoo to laundry detergent, these shops have it all, and most products are cheaper than at places like Watsons or Guardian. 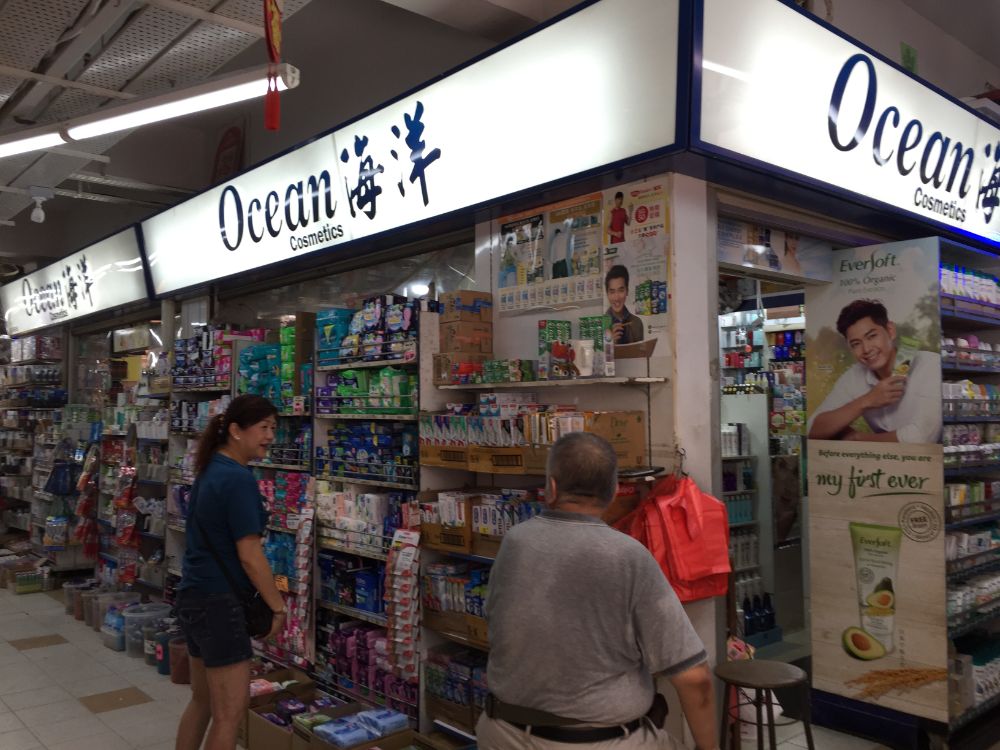 Other price discrepancies aren’t as dramatic, but they are savings nonetheless. For instance, a 450ml bottle of Kirei Kirei hand soap is $5.80 at Watsons vs $5.20 at Swanston, while Laundrin’ laundry softener is usually $10.90 at NTUC vs $8.90 here.

Considering their “auntie” pedigrees, both Swanston and Ocean Cosmetics have a surprisingly good range of cooler beauty brands too. There’s definitely more variety than the average pharmacy; I spotted tons of Japanese, Korean and Taiwanese brands, e.g. Sophrapy, Innisfree and My Beauty Diary. 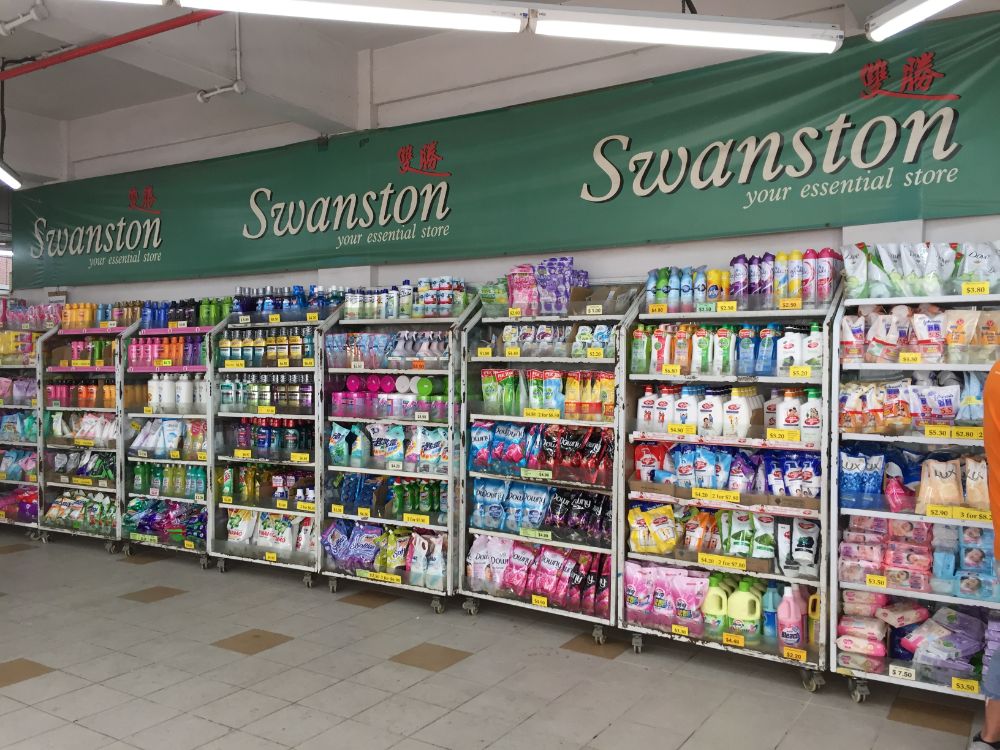 It’s relatively easy to get a cheap haircut in heartland shops like Snip Avenue or E-Coin, though the quality is dubious at best and the service non-existent.

But what if you need a quick trim in the CBD area during your lunch break? 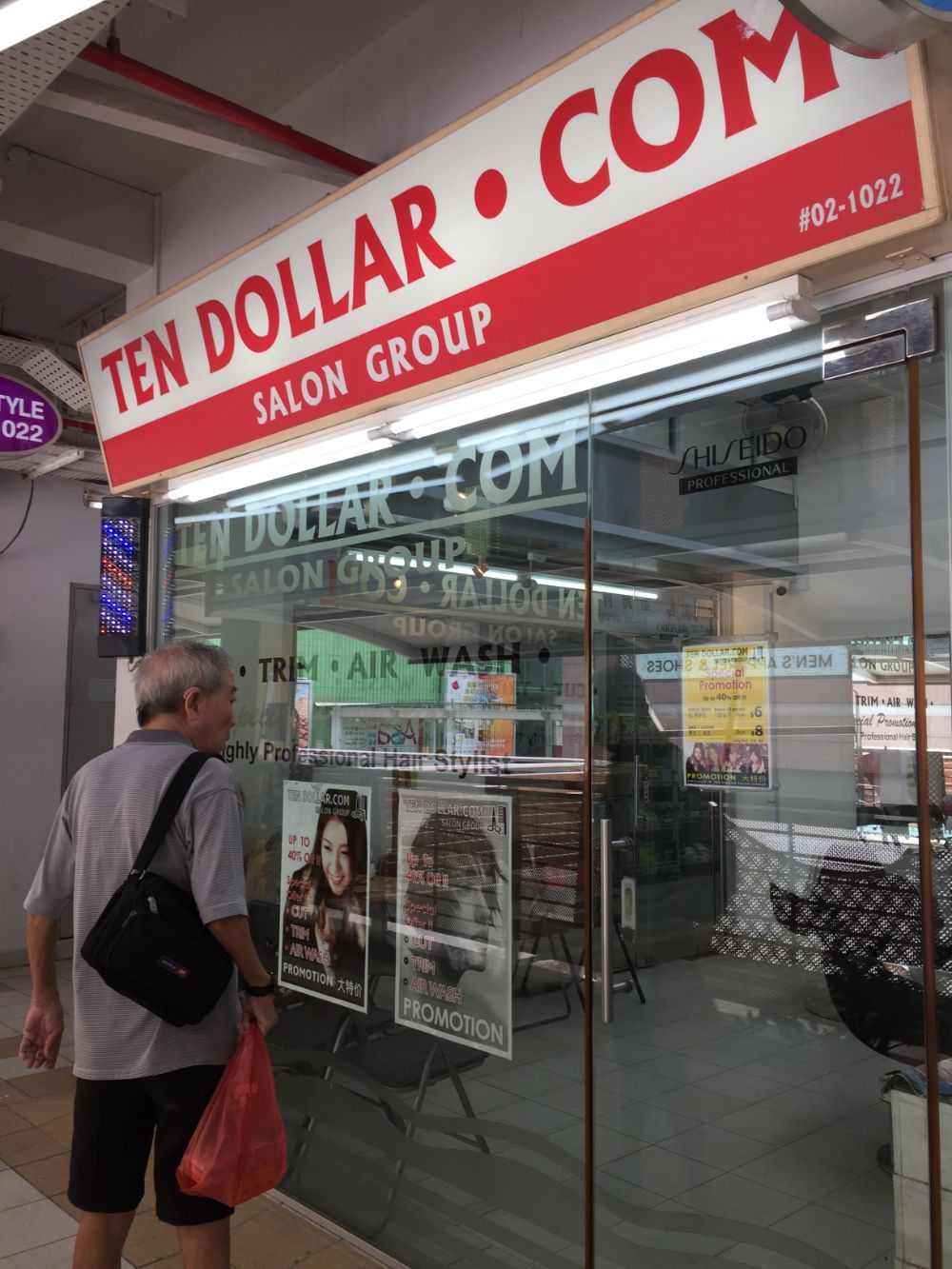 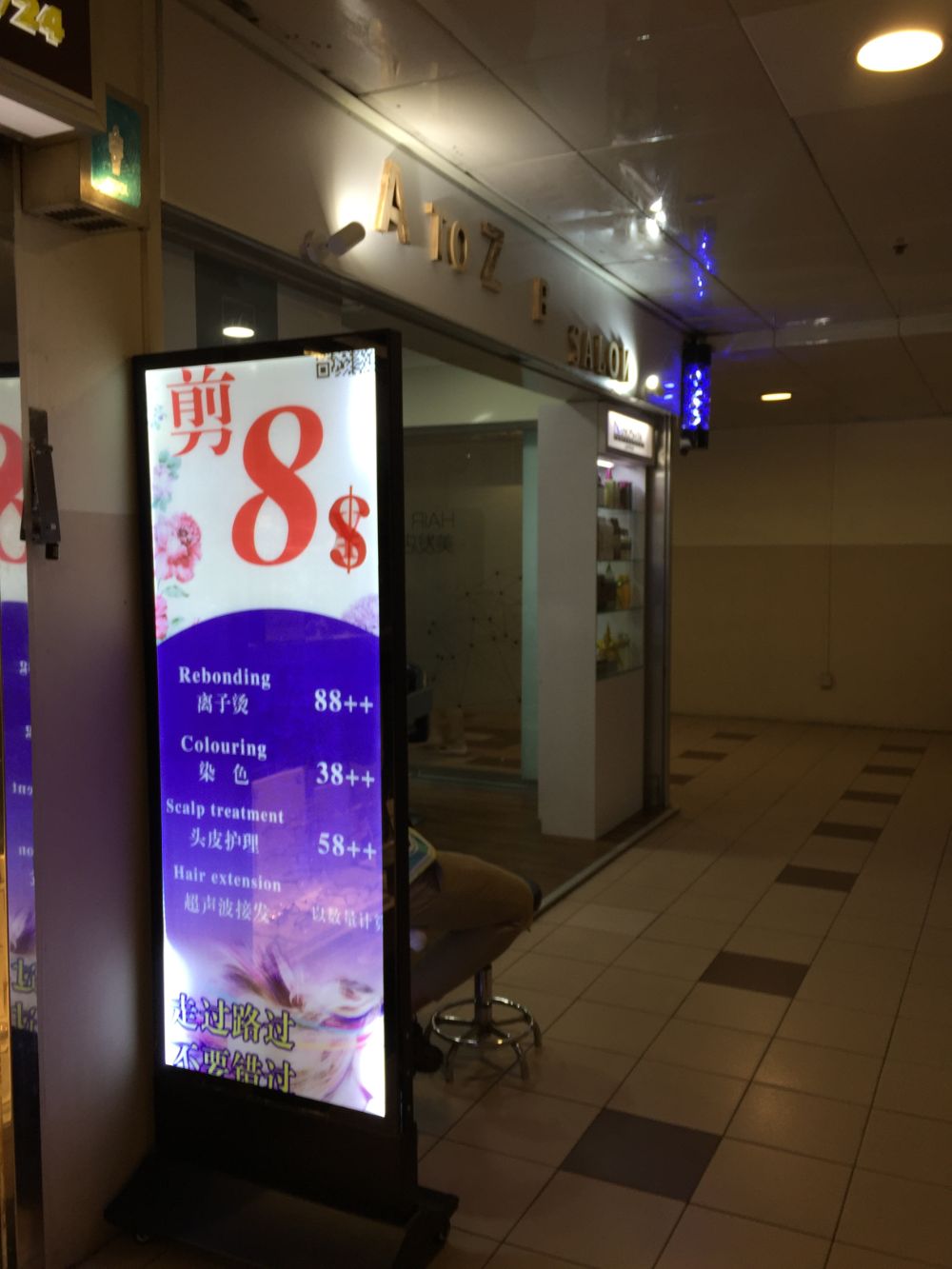 I also came across The Beautiful One, a cozy nail and eyelash salon at level 2 of People’s Park Food Centre. Its promo price of $15 for a classic manicure seems incredibly cheap considering it would normally cost at least $25 elsewhere. 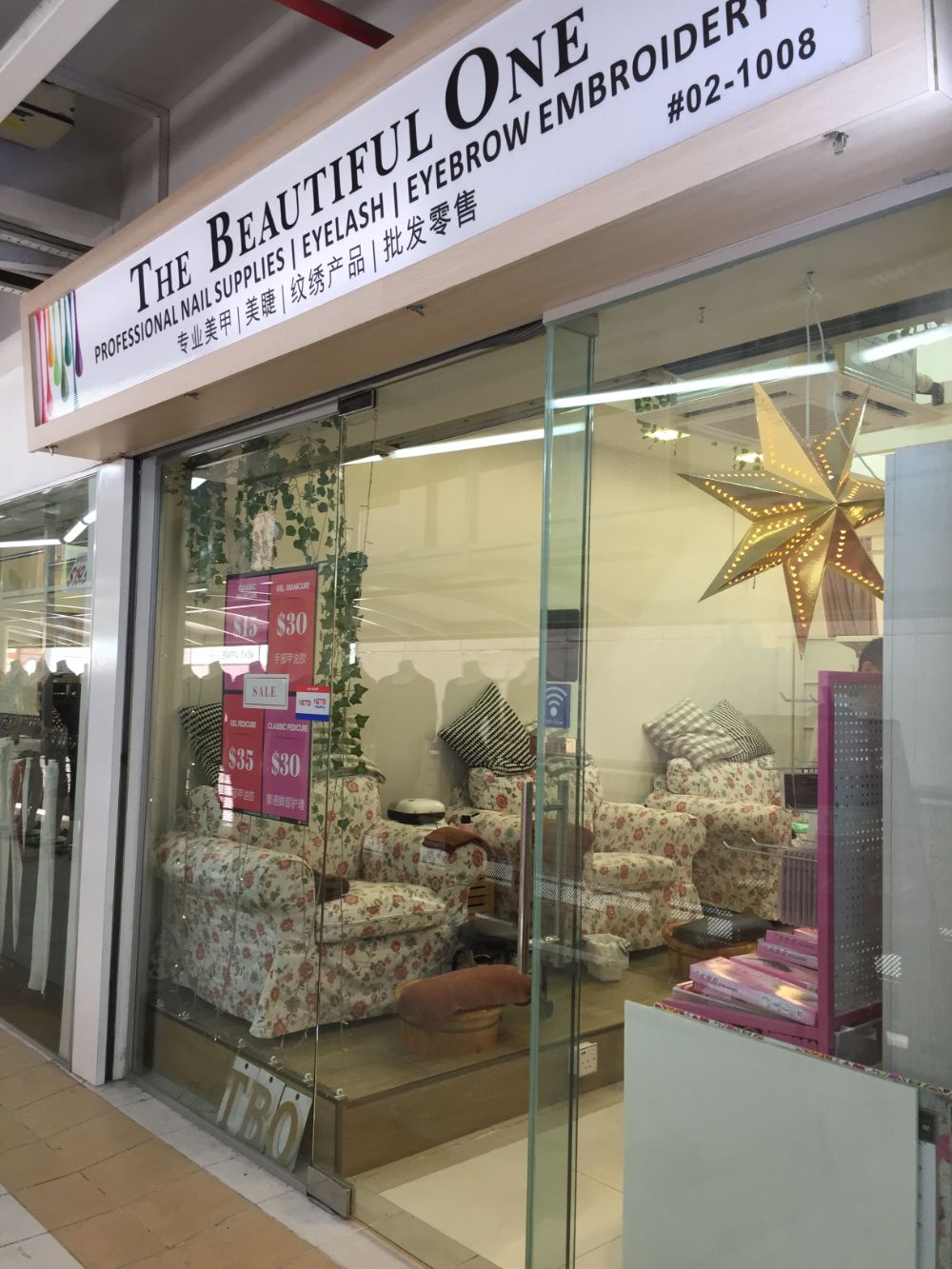 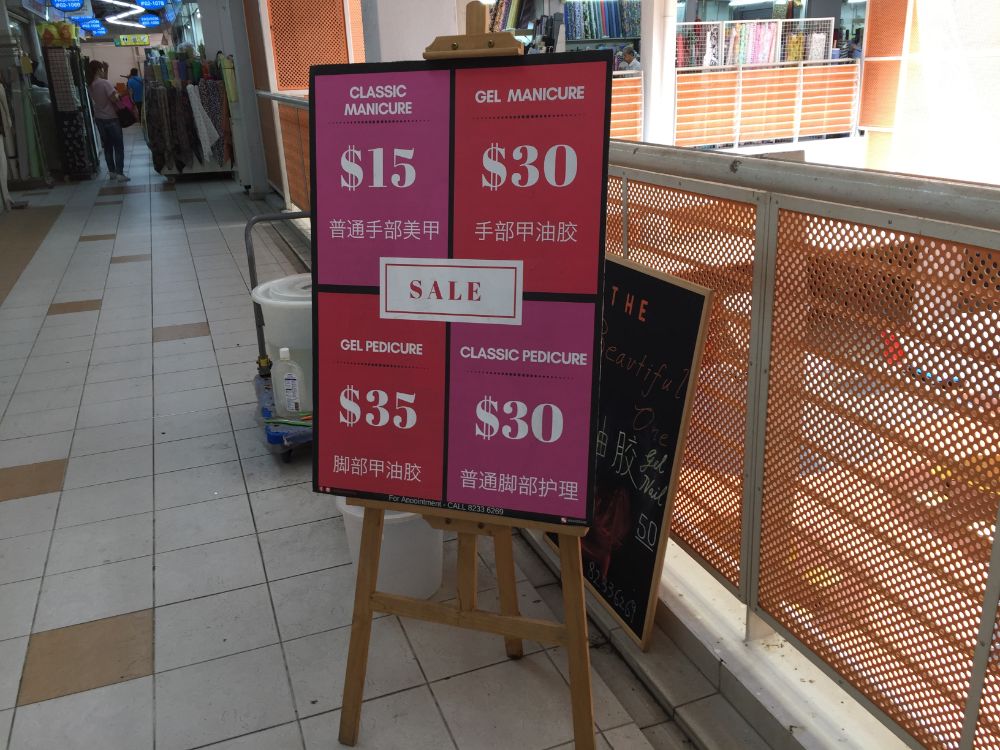 Sewing, knitting and crafting are lost arts now that you can buy everything pre-made for next to nothing from online stores and fast fashion retailers.

But if you’re into these hobbies (or want to try), then you should make regular visits to the People’s Park area since it has a number of craft supply shops all in one place.

People’s Park Centre has at least 2 major haberdashery shops where you can find thread, yarn, knitting/crochet needles, buttons, ribbons, and other bits and bobs: Sing Mui Heng at level 1 and Golden Dragon at level 2. 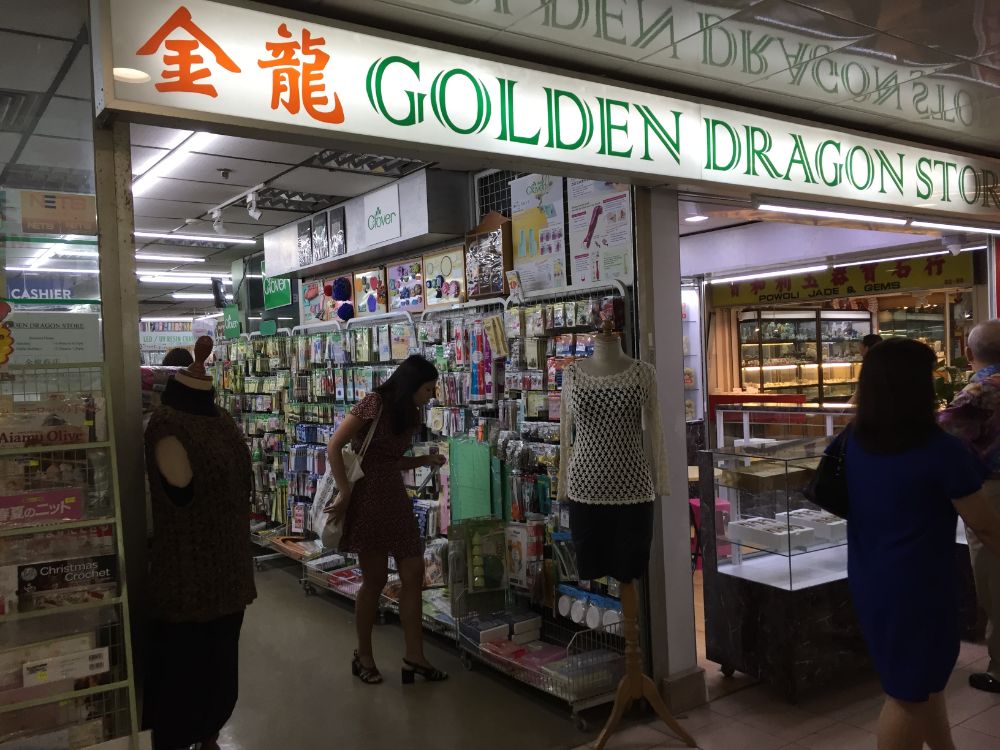 If you’re looking for fabric to sew stuff with, there are tons of options at level 2 at People’s Park Food Centre that sell cloth by the yard. IMO, they’re more chilled out and better-lit than the textile shops in the Arab Street area, but the variety isn’t as huge. 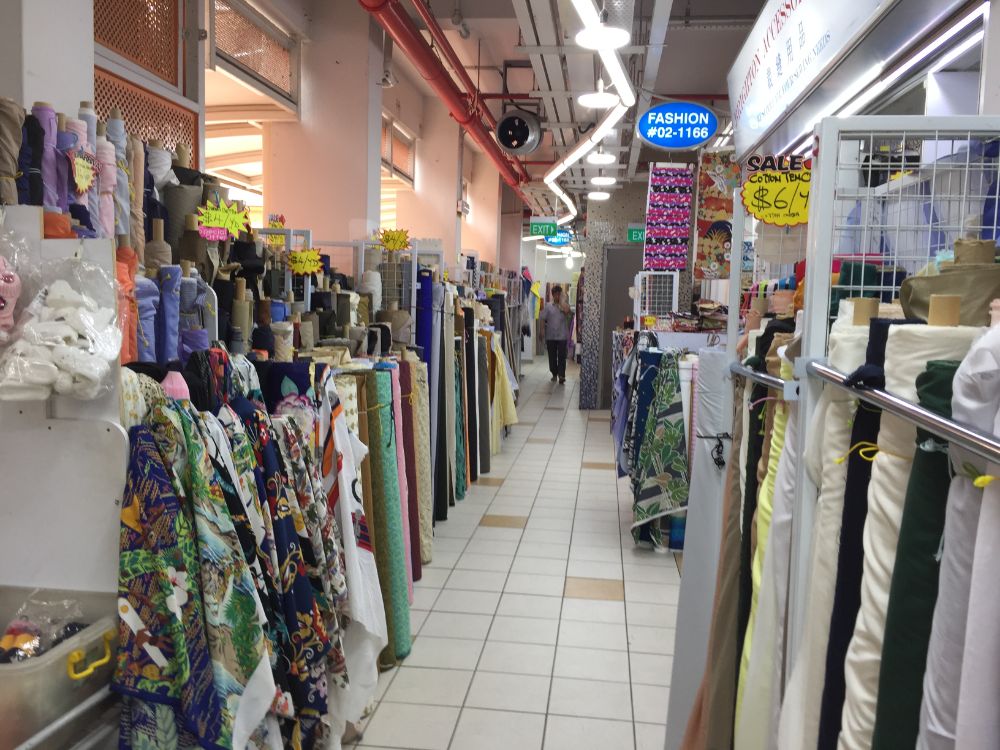 Also worth a visit is the huge Maple House costume shop at People’s Park Food Centre too, which is handy if you’re looking to complete your DIY Halloween costume / cosplay outfit. 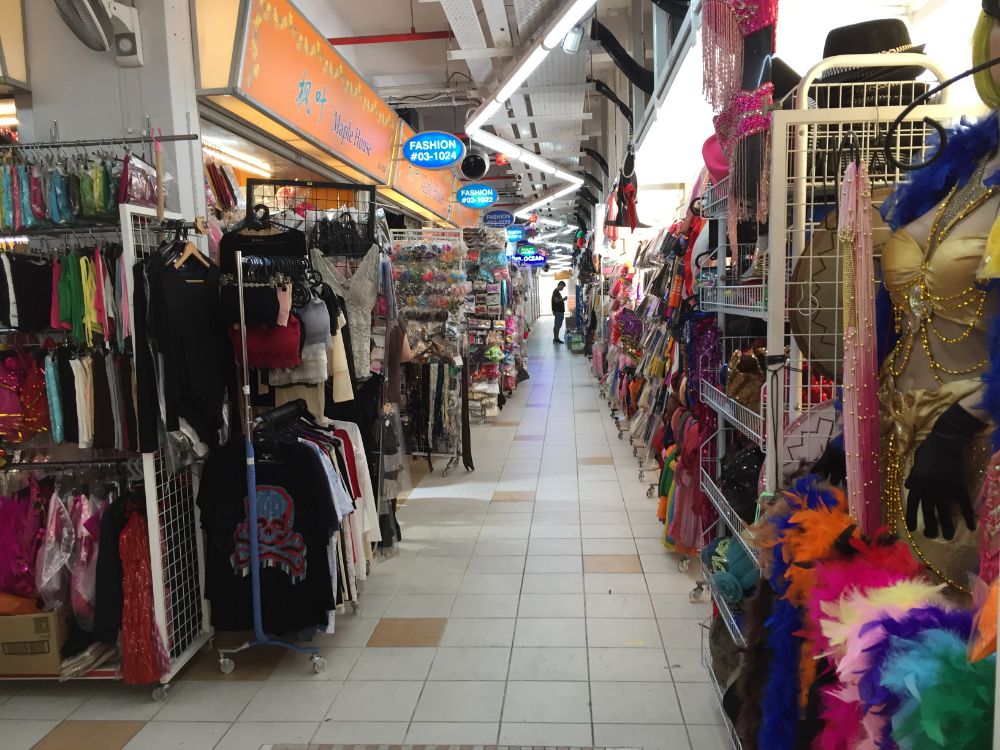 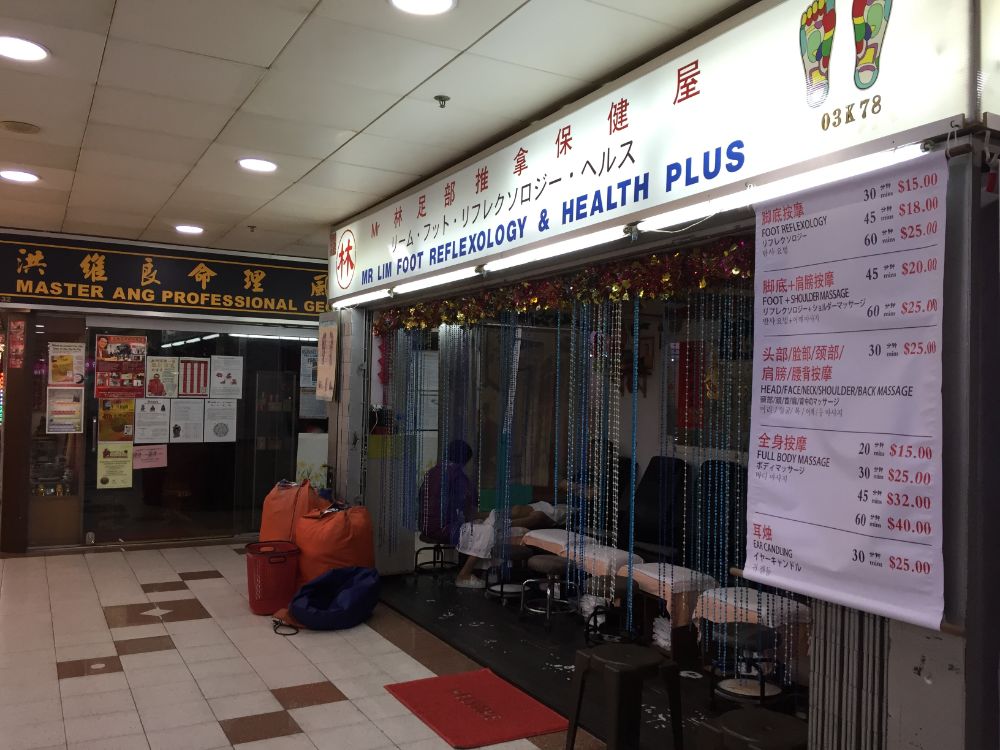 There’s not much point trying to pick the “best” one because they’re nearly all the same. All of them are super no-frills (dim lights, but no music, no aromatherapy) and the masseuses are mainly Chinese nationals who will not hesitate to inflict pain on your knots. 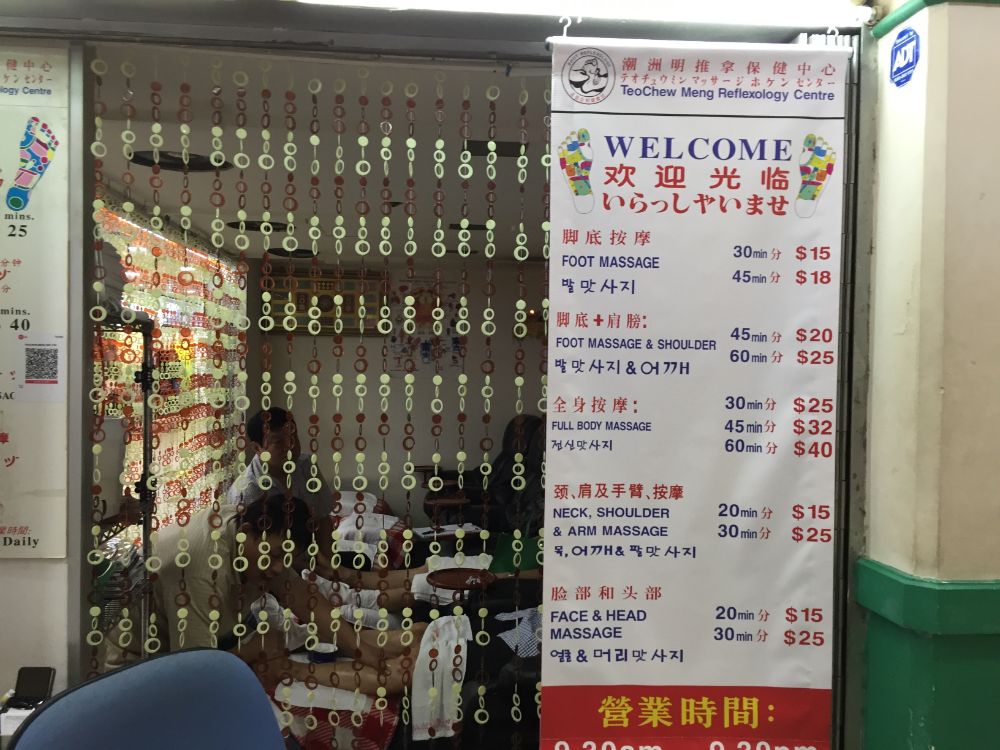 Massage prices are also standard across almost all of them:

For comparison’s sake, a 1-hour full-body massage at a regular spa costs at least $60. At People’s Park Complex, it’ll set you back only $40. Shiok. 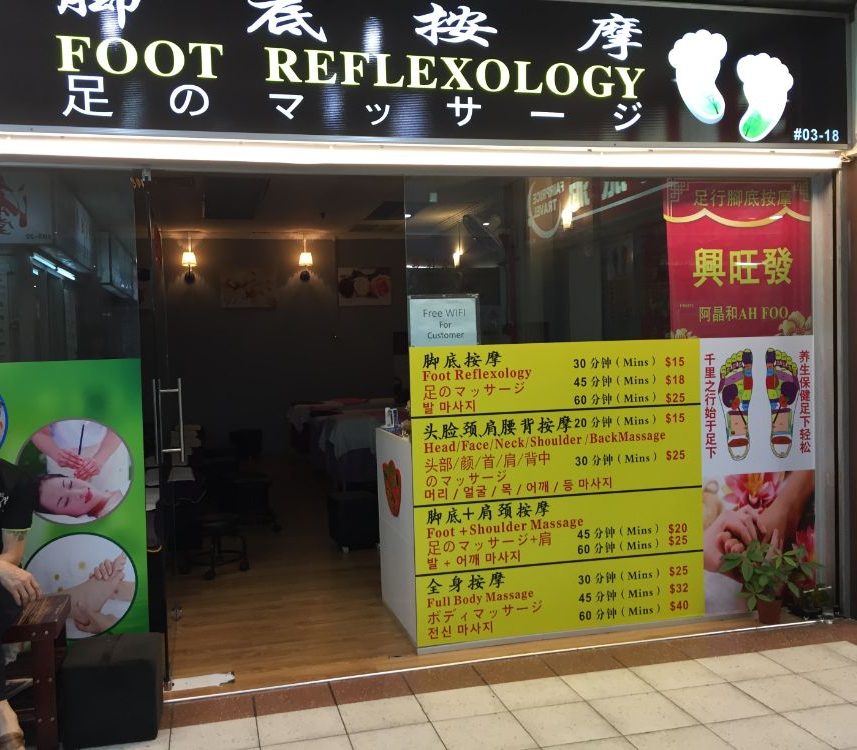 Sadly, there’s not much else to do at People’s Park Complex. The run-down mall contains mainly travel agencies and the odd Rolex shop. But I’m definitely coming back here for a cheap massage fix — while it’s still possible, that is.

What will you miss most about People’s Park Centre / Complex? Tell us about it.

Other vintage shopping malls to visit:

Queensway Shopping Centre – Are The Sneakers Even Still Cheap?