K-pop, K-beauty, K-BBQ… As long as it’s Korean, it’s worth checking out, right? If you want to live and breathe the K-lifestyle, you’ll need to stock up your kitchen with the right groceries too. Here are 5 Korean supermarkets in Singapore to do just that.

Shine Korea is probably the biggest Korean supermarket chain in Singapore, with 12 outlets around the island. They have quite a few outlets downtown and in the CBD area, with a several heartland stores in Tampines, Harbourfront and Woodlands.

Shine Korea claims to sell “authentic Korean products at the best price”, which sounds about right. Their prices are quite competitive, and they do have a huge variety. They sell everything from packet ramyeon, tidbits, condiments and beverages. 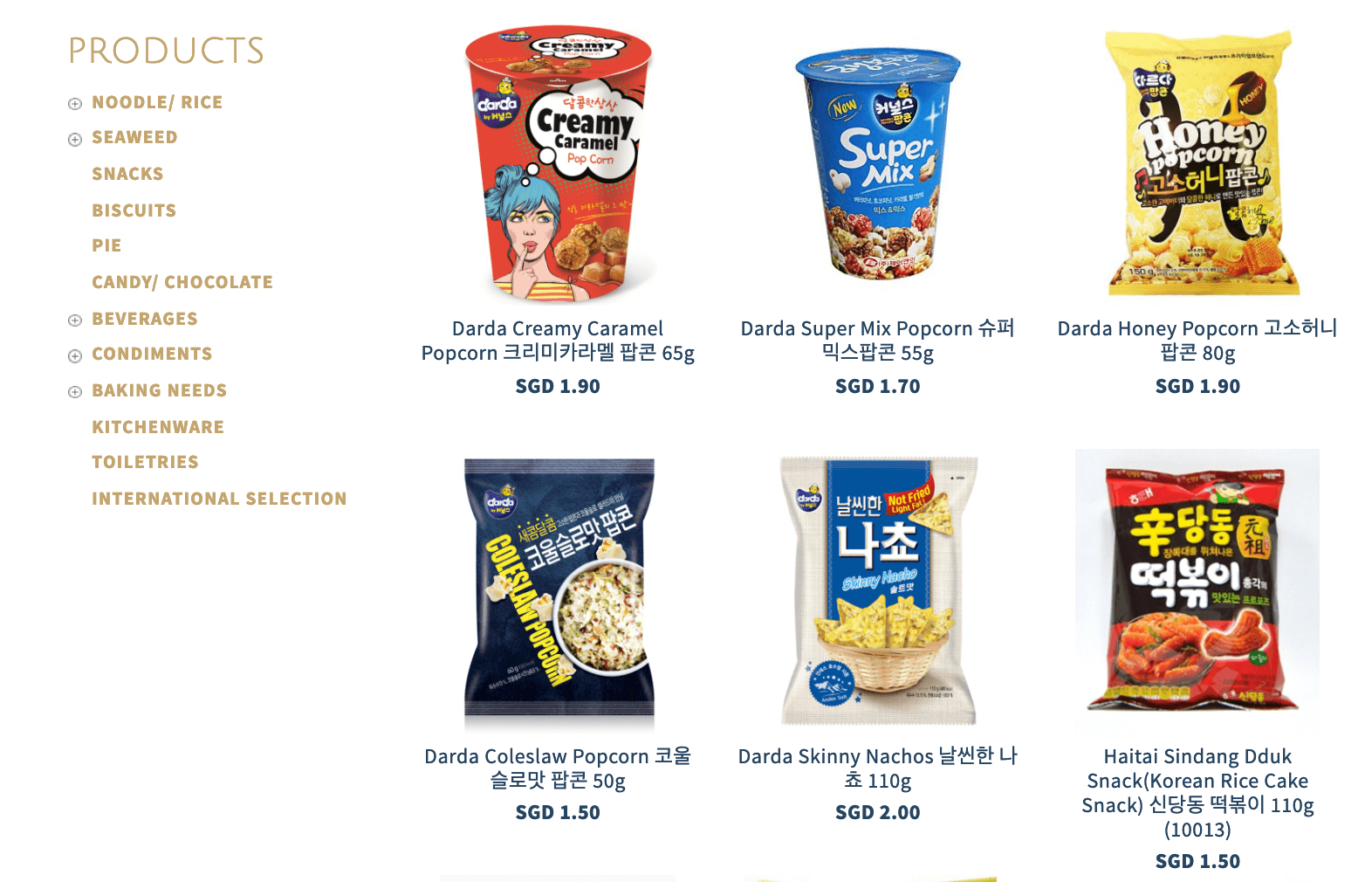 The famous samyang fire noodles are $5.90 for a pack of 5, and you can find lots of Korean chips and crackers for under $2 per pack.

If you can’t swing by any of the 12 outlets, you can also shop online either directly at their website (www.shinekorea.com.sg) or through Qoo10. On their site, there’s free delivery for orders above $80, and you will get your groceries within 5 days.

There are a lot of people who visit Korean supermarkets just to feel Korean. That’s right – no shopping lists, no agenda. Just there to comb the shelves and soak in the atmosphere.

If that’s the experience you’re looking for, give Koryo Mart a shot. It seems to be targeted at Korean expats living in Singapore – even their website is mostly in Korean. Koryo has 8 branches, some of which go by the name “K-Market”.

Koryo Mart is one of the cheaper Korean supermarkets, although in general, the prices don’t vary by that much across the chains. If you have one near you, great. If not, don’t bother – you’ll probably save only 5% to 10%, which is quite little. 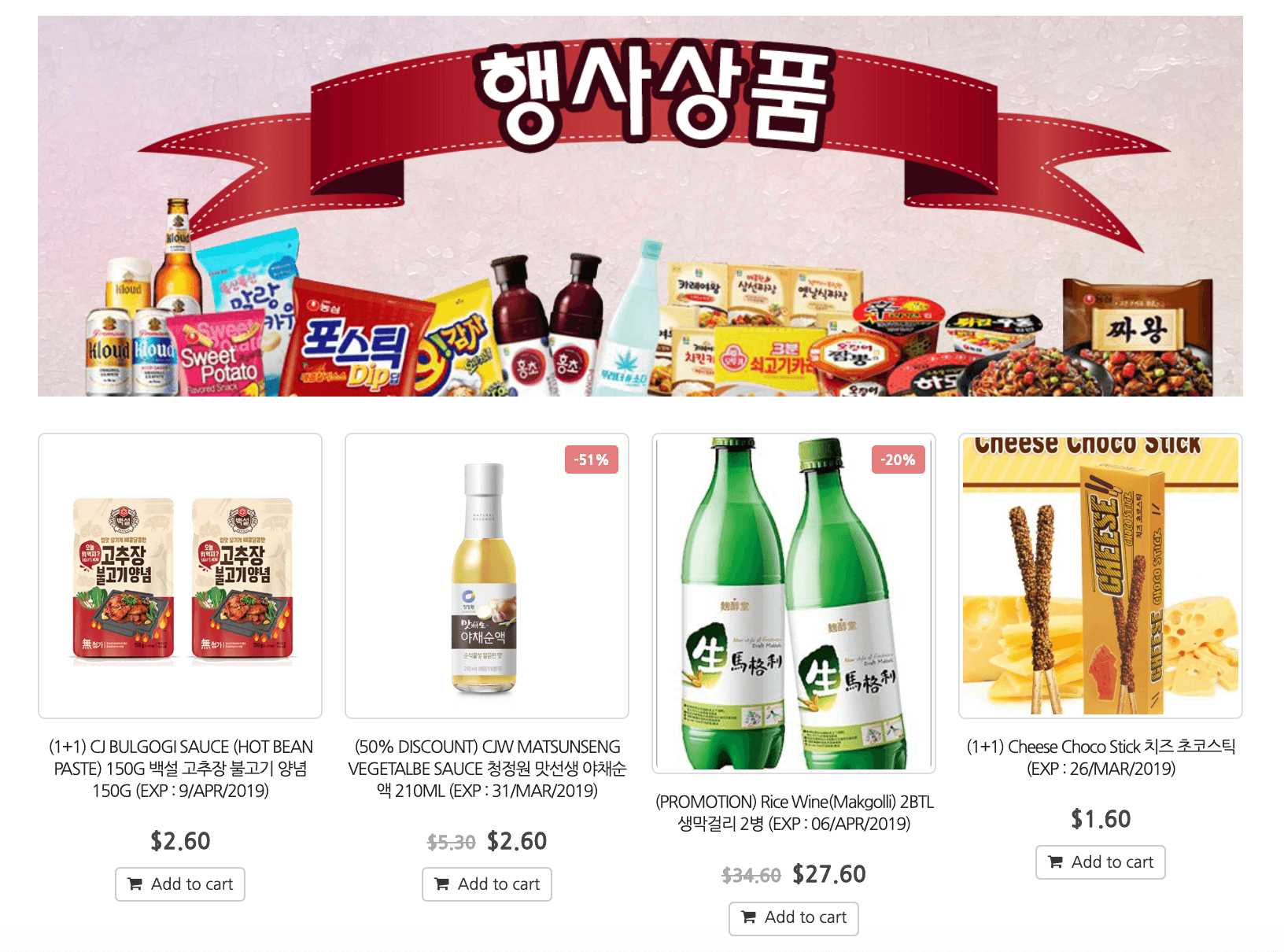 The thing that stood out to me is their clearance sales for items that are close to expiring. At the time of writing, there were the following on their e-store:

Koryo Mart is also on Qoo10.

SolMart doesn’t quite have as many outlets as Shine Korea and Koryo, but they do have 4. And like the above, they also have an e-store and are on Qoo10.

SolMart’s website is also in Korean, but unlike Koryo’s, there are no English translations. So if you want to shop on their e-store, be prepared for some really weird (and probably inaccurate) translations by Google. It may be easier to shop on their Qoo10 store instead.

In addition to the usual snacks, SolMart also sells fresh meat and vegetables on their online store. The fresh stuff isn’t particularly cheap though – 500g of sliced beef is $13.90 and 500g of pork belly is $11. For those, you’re better off heading to your nearby NTUC.

There are 5 Lee Mart outlets, which are at Chinatown, Bukit Panjang, Suntec City, Tampines and Ngee Ann City. Three of them are downtown and near the CBD, which is quite convenient.

In addition to Korean groceries, some outlets like the Suntec City Mall one actually have a diner and serves meals. Lee Mart is on Qoo10 as well, but the selection is quite small.

I notice that everything is on sale though, so I’m guessing that they just upload their clearance items onto the platform. On sale, their soju is going for just $9.90 a bottle (360ml) and the Hite beer is $65 for 24 cans (with a complimentary pack of chips to boot!).

HarinMart is an online Korean grocer; they do not have a brick and mortar store. That would explain their prices, which seem the lowest of all. 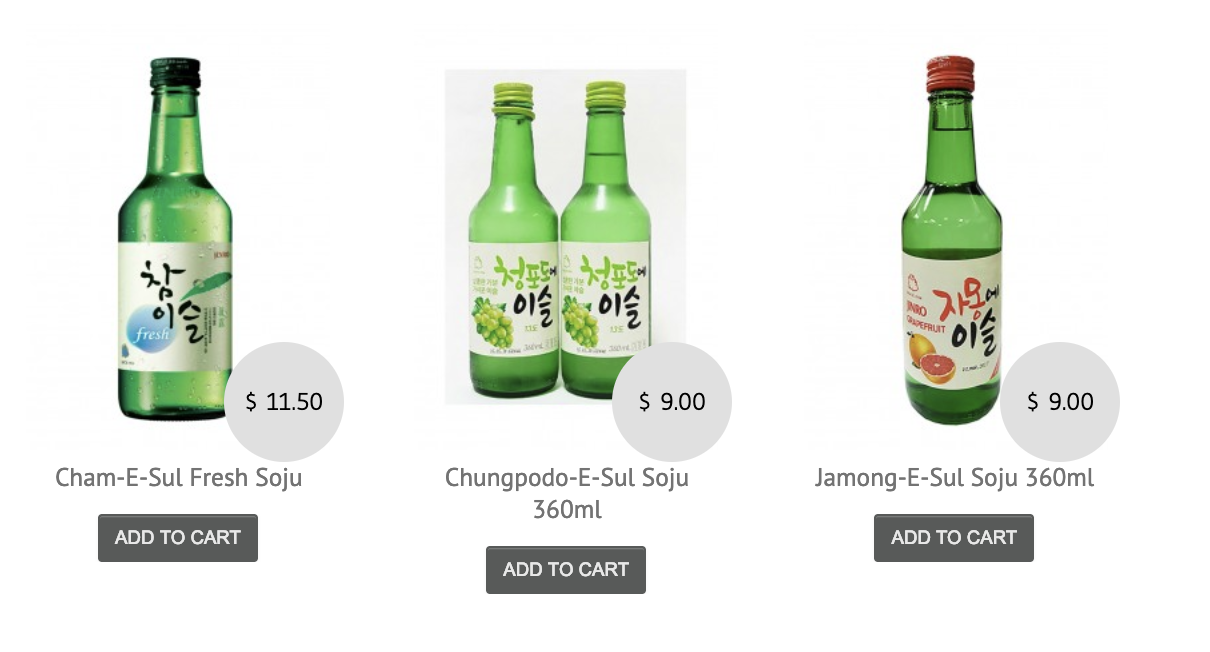 For instance, a standard 360ml bottle of soju is only $9, compared to $10+ elsewhere. HarinMart sells a huge variety of products, including Korean side dishes (like pickled radish and rice cakes), frozen and dried seafood, ready-to-eat meals and more.

Delivery is chargeable though – it’s $3 and your orders must at least make $50.

How do these Korean supermarkets compare with NTUC Fairprice & RedMart?

But do you always have to go to a Korean supermarket for Korean groceries? Not necessarily. Lots of local supermarkets actually carry the more popular, mainstream stuff like the Samyang spicy noodles and Binggrae banana milk.

I picked out a handful of popular items and checked their prices at NTUC Fairprice and RedMart.

Binggrae banana milk is a hit not just among children, but adults too. It’s the same price at Fairprice and Shine Korea, but slightly more expensive on RedMart (sold by Sing Long trading).

Ahh.. The ramyeon that started it all. These super spicy noodles shot to fame when it became a YouTube challenge to film yourself conquering your bowl of “fire noodles”. At the time of writing, these are on sale at Fairprice and RedMart, making them the cheapest. Best at regular price, they’re actually cheaper at the Korean supermarkets.

Another super popular snack, these flavoured nuts can be found at most local supermarkets (if they’re not out of stock!). It’s slightly cheaper there too.

What’s a Korean meal without some soju, right? There are many brands of soju, but the cheapest one at Fairprice is still $16.35. That’s way more expensive than all the Korean supermarkets, which sell it at $9 to $13. They may not be the same brand – the K-marts have a bigger selection – but these prices are all for standard 360ml bottles.

Where is your favourite place to shop for Korean groceries? Tell us in the comments below.

Free Samples Singapore – Where to Get Samples for Baby Stuff, Beauty, Toiletries & Food

Shopping
How Having the Pace Card’s ‘Power of 3’ in Your Pocket Can Empower You Financially
Sign up for our newsletter for financial tips, tricks and exclusive information that can be personalised to your preferences!