Starbucks Coffee Prices in Singapore – Are They The Same Islandwide?

Earlier this year, I was served #shookt tea when I found out that McDonald’s charges us different prices at different outlets in Singapore. Many of our readers were surprised too, and suggested we keep up the great “investigative journalism”… So for part two, here’s a similar comparison for Starbucks menu prices in Singapore.

Ready to pen the mother of all exposés, I split the districts into 4 different tiers of “atas”. These are the 8 Starbucks outlets we visited:

My guess was that the downtown outlets and those at popular tourist spots would be the most expensive – that was the case for McDonald’s anyway.

BUT LO AND BEHOLD! Starbucks came through!

As it turns out, Starbucks coffee prices are actually the same at most outlets in Singapore.

To my delight, I found that there was no price difference for almost all the outlets. The exception was One Fullerton and which was only very slightly pricier. Siglap, Westgate, HillV2, Thomson Plaza, Scape, Suntec City &  Jewel Changi Airport were the same; these are the prices for the Grande beverages:

Note: It’s a looooong table – you can scroll for more menu items and prices.

Starbucks Jewel Changi Airport – $1 more, but it was a typo error

When I went to check out the highly anticipated opening of Jewel Changi Airport last month, I took a peek at the Starbucks there. There are 2 Starbucks outlets in Jewel, one on the 2F and one on 1F (24 hours).

What I found was pretty strange… 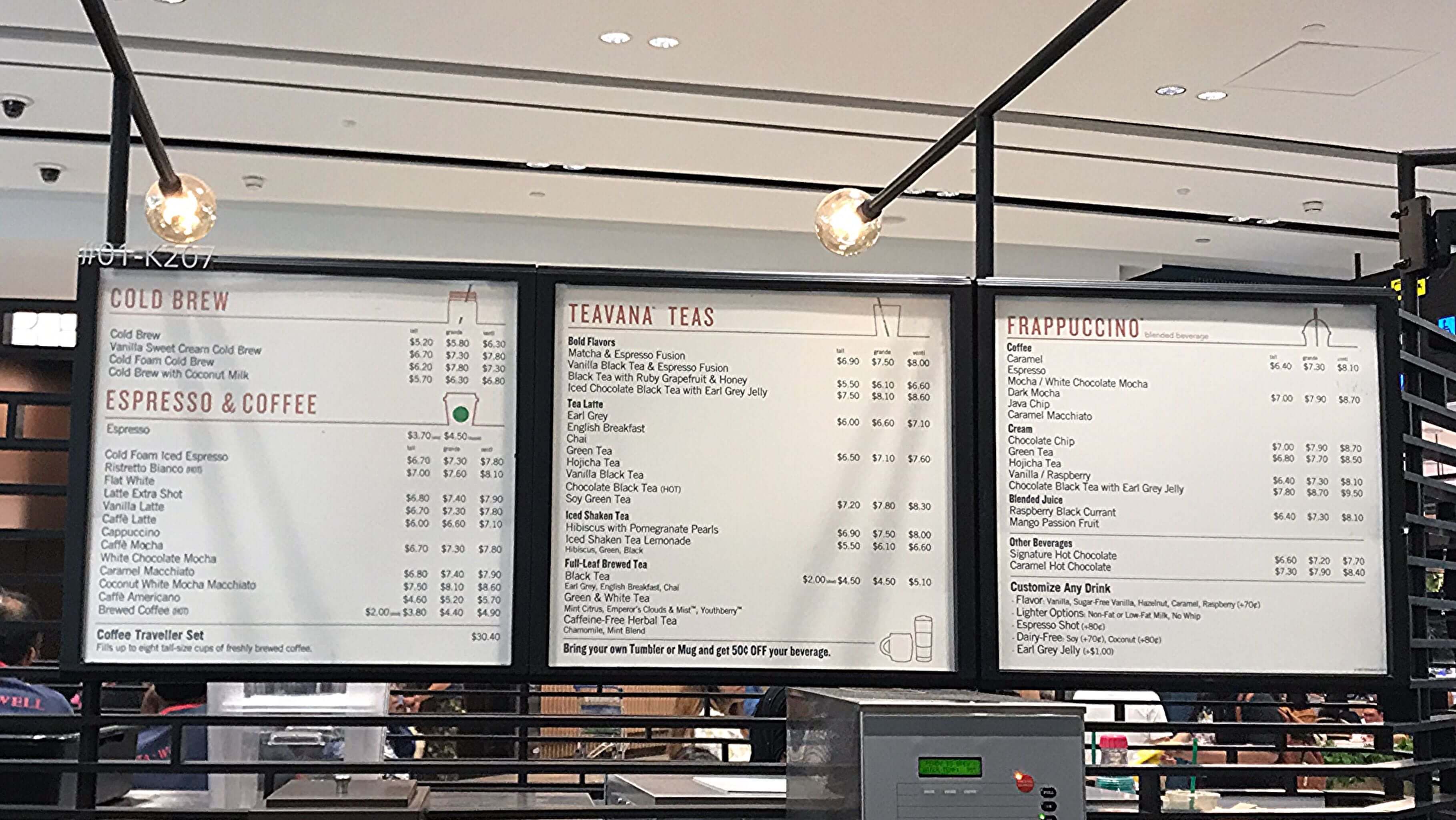 The prices look pretty similar to the other outlets… except wait – let’s zoom in on the cold brew section: While everything else on the menu is literally the same, the Cold Foam Cold Brew is $7.80, which is $1 more than the other outlets ($6.80). Is it that the east-siders and/or tourists have a particular preference for this beverage? If not, what could possibly explain the random anomaly?!

I’m convinced this is a typo error because 1) it makes no sense for just 1 item to be so much more expensive, and 2) the other sizes are the “right” price.

@Starbucks, please reach out to us – more than anything we are genuinely curious!

Unlike Jewel Changi Airport, it wasn’t just one thing with a fishy price at Starbucks One Fullerton. Sian as it is, I can’t say I’m surprised – One Fullerton is home to many chi chi restaurants like Forlino, P.S. Cafe and more.

Let’s look at their menu: 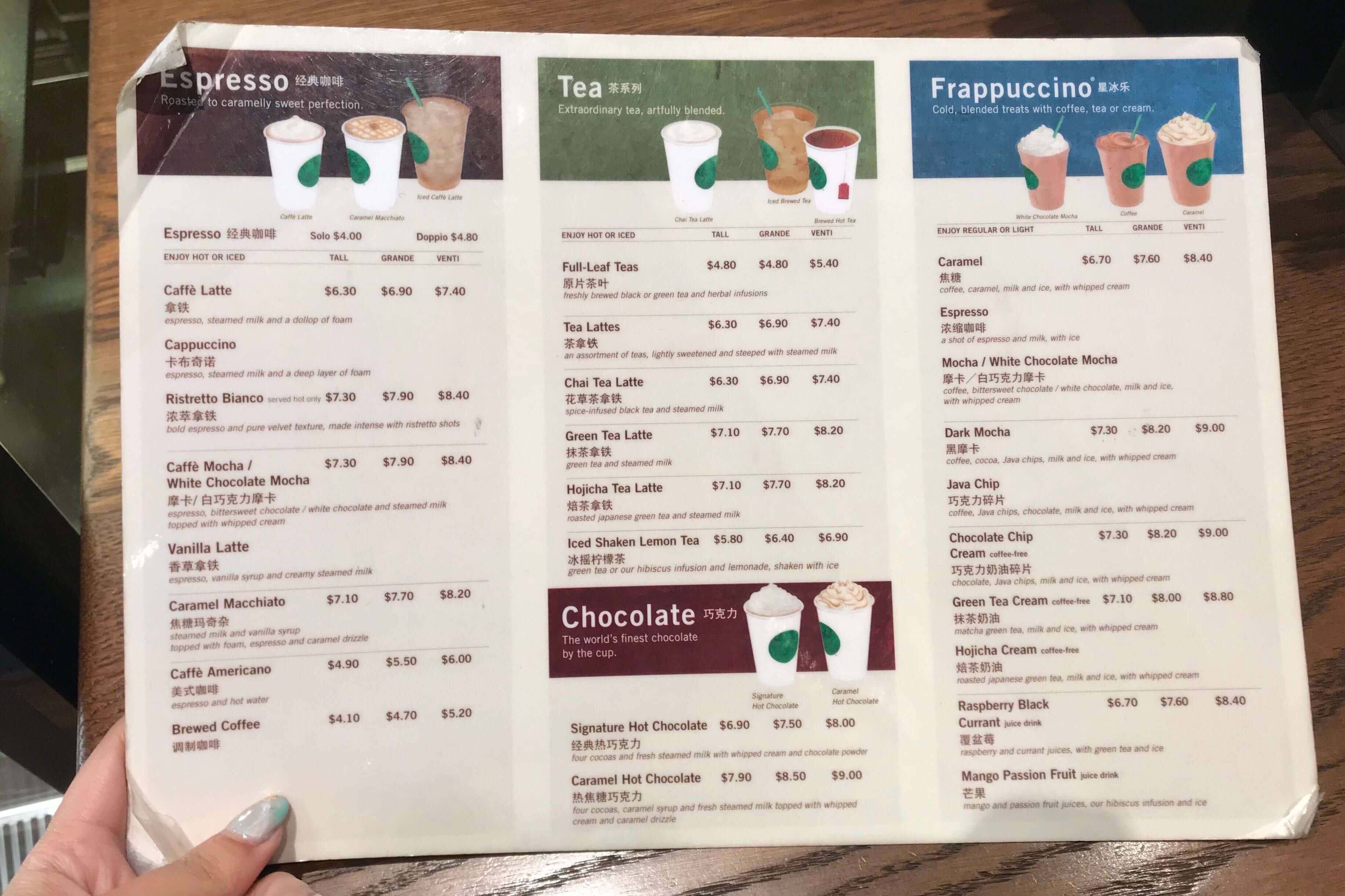 Conclusion – Starbucks coffee prices are the same at most outlets!

Generally, it seems like Starbucks prices are quite standard throughout most parts of Singapore, which is great news. There was no price hike even for Scape (prime Orchard Road), Suntec City (near the CBD) and Jewel Changi Airport (tourist spot).

Perhaps it is because they already have a high-enough profit margin, so the differences in rent and other overheads don’t matter as much, but whatever the case, I’m just thankful I can head downtown and not have to worry about paying a premium. Oh, and it doesn’t seem to matter if the store is open 24h either, because the Jewel Changi Airport one is.

One Fullerton was the only one that was more expensive, and even then, the prices only differed by a few cents, which seems reasonable for the ultra-“atas” area.

Of course, I didn’t make it to all 124 Starbucks outlets in Singapore, and these findings are just for the small sample size of outlets that I could afford to visit.  So take it with a pinch of salt, okay? And if you have more Starbucks menus, feel free to send them our way!

Are you surprised that Starbucks prices in Singapore are pretty much the same islandwide? Tell us in the comments below.

Top 10 Cult Tanjong Pagar Cafes – How Much Do Their Signature Drinks Cost?