Writing these Chinese New Year articles has been extremely illuminating. For one thing, I discovered that Singaporeans actually do crazy things for CNY, and for another, I leant that a can of abalone can cost as much as a night’s stay in a small villa in Bali.

Now, I don’t know what’s up with Chinese people’s fetish for this mollusk that tastes like an overcooked drain plug, but phew, canned abalone is really expensive.

There’s nothing like scoring a good deal on expensive stuff, which explains why Singaporeans go totally bananas when supermarkets roll out their abalone discounts each year. Here’s a compilation of the best abalone promotions in Singapore for CNY:

Although you can find no-brand canned abalone in most grocery stores, the abalone scene in Singapore is pretty much dominated by New Moon – yes, the abalone brand with a big enough marketing budget to hire Fann Wong as celeb endorsement.

Apart from the colour of the packaging, you also need to check if there’s a label that says, for example, “5 to 7 pieces”. These indicate smaller abalones and are therefore cheaper than the label-less counterpart. If there’s no label, the can contains a single large abalone. 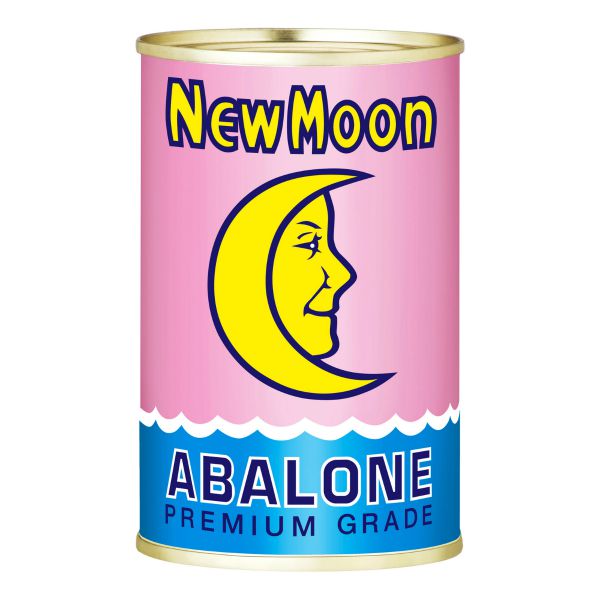 For this article, I’m looking only at New Zealand abalone (pink can, 425g) as it’s the cheapest and most common of the “single abalone” varieties. I say “cheapest”, but the retail price is usually $42.80 per can. (See what I mean about that Balinese villa?)

If you’re buying in bulk, I think the best deal is on New Moon’s Qoo10 store. Even if you can’t finish $200+ worth of abalone, you can always purchase it together with friends or relatives. There’s free shipping as well.

By the way, if you’re after the pricier Australia abalone, most of these retailers are also selling it at discounted prices too.

Compared to New Moon, Skylight (”天“) abalone is a distant second in terms of both popularity and promotions. But if you’re trying to impress the in-laws, it’s still a “safe” (read: traditional) option.

Skylight abalone doesn’t come in as many varieties as New Moon. The most common ones you’ll see are the New Zealand abalone (red can) and Australia (pink). These are the ones labelled “Superior Abalone” and they have just a single abalone inside.

There are also variations with names like “Prince Abalone” or “Empress Abalone”; these royal titles usually indicate that the abalones inside are smaller, so each can comes with several abalones inside. It should say so on the tag or label (e.g. “4 to 12 pieces”). 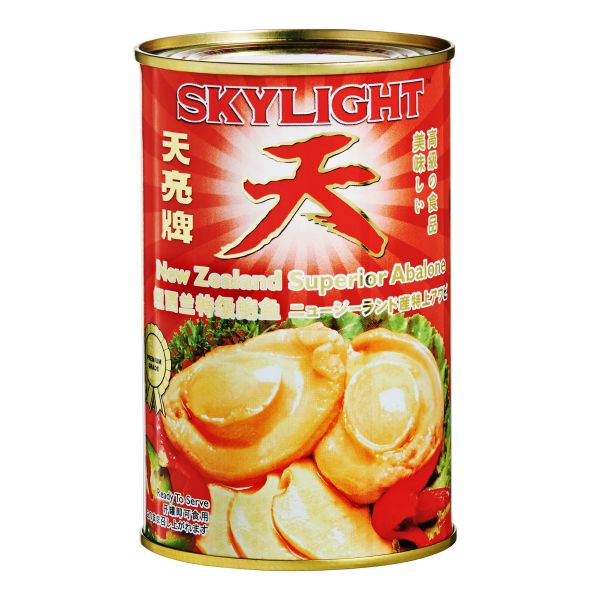 Again, I’m looking at Skylight’s cheapest superior abalone, the New Zealand abalone (red can, 425g) and the usual price of $45 per can is even more expensive than New Moon. However, you can make use of the following promotions to get a cheaper rate.

Unfortunately, Skylight doesn’t have much of an online presence, let alone a Qoo10 store, so you can’t max out on cart coupons or anything.

However, the ongoing promotions at NTUC FairPrice and Guardian (of all places) are quite worth it – you can still score your abalone at less than $35 a can, which is considered a steal.

Are there any cheaper alternatives to abalone?

No… and yes. It depends on whether you’re planning to buy abalone for “face” or “taste”.

If you’re gifting canned abalones to your relatives and clients purely for the sake of “face”, then no, there’s nothing I can do for you. Because when it comes to Chinese gifting traditions, it’s not so much the practical value of the gift that’s important, but the fact that you’re willing to spend extravagant amounts of money on the giftee. So, bo pian – you can’t save much.

However, if you’re buying abalone for “taste” – i.e. you just want to cook with abalone and you’re not too fussed about the perceived premium-ness of the brand, then yes! You can definitely try the following options to save money:

Smaller canned abalones: Every brand sells abalones in smaller varieties. As long as you’re willing to eat smaller abalones – which will suffice for abalone porridge or veggie stir-fry anyway – you can almost certainly save money.

You needn’t stick to New Moon or Skylight either. There’s a whole slew of non-branded small abalones to try on Qoo10, and New Moon even sells Flying Wheel brand mini abalones ($50 for 6 cans). Note that small abalones – especially those from Japan – are often farmed rather than wild-harvested, and will taste a bit different from the usual big ones.

Fresh frozen abalone: This isn’t as common as canned abalones, but fresh abalone – which is commonly sold in frozen packs – is a very viable alternative.

It’s actually cheaper than its canned counterpart. Giant sells it at $26.80 for a 200g pack and RedMart has a packet of 6 at $48.90. That’s more cost-effective than the New Moon NZ abalone, where the drained weight of the one abalone inside is only 140g!

Mock abalone: If you like the rubbery texture of abalone, then I can point you to sliced imitation abalone which is sold in the freezer section for $3 to $5 a packet – a fraction of the price of the real thing.

This stuff is usually made of squid, so although it’s “mock”, it’s not vegetarian. You can find vegetarian mock abalone too, for less than $2 a can, but it just tastes like soggy gluten nuggets, not abalone. (Not that soggy gluten nuggets is a bad thing – I live for this stuff, especially with plain porridge.)

Abalones: Worth every cent, or just a huge scam? Tell us what you think in the comments!

Chinese New Year Budgeting (2022) – How Much Does It Cost To Follow Tradition?

Bak Kwa Prices in Singapore (CNY 2022) – What Is Worth Queueing For?

Dining
Mooncake Festival 2022: Raffles Hotel, Goodwood Park, Peony Jade Mooncake Prices
Sign up for our newsletter for financial tips, tricks and exclusive information that can be personalised to your preferences!