Our favourite supermarket NTUC FairPrice has just opened a massive new store at VivoCity, and we hear that it’s stuffed to the brim with hipster-friendly features.

According to this non-firewalled Straits Times article, the new NTUC FairPrice at Vivo seeks to provide a “unique brick-and-mortar shopping experience amid stiff competition from online grocers”.

Oh… So, just like what Honestbee was trying to do with Habitat? Haha J/K, I’m sure any resemblances are purely coincidental.

Being the resident supermarket critic and devoted online grocery shopper, I just had to go down to VivoCity to see if the new NTUC FairPrice Xtra really had what it takes to excite jaded millennials.

For a start, the new NTUC FairPrice is HUGE. It occupies 2 storeys in the basement of VivoCity, but you’d never know upon entering, because the lofty ceilings and cavernous layout made it feel like you’re inside a standalone building.

NTUC Vivo’s main entrance area is filled with a veritable bounty of fruit and veggies in a display that would put Cold Storage to shame.

But what drew my attention almost immediately was the indoor mini-farm run by ComCrop. Thankfully, it’s not just for decorative purposes. To NTUC FairPrice’s credit, there’s also a small chiller where you can purchase ComCrop’s cai xin or lettuce.

With the promotional price of $5.90 for 3 packs (usual $2.95 a pack), these aren’t too expensive compared to the run-of-the-mill “Pasar” veggies, surprisingly. I wish there were more varieties available though. 2. Durians with no smell & no durian uncle

These days, you can buy durians online and get them delivered to your doorstep, but the problem is that you can’t inspect the goods and choose the juiciest creamiest specimen possible.

At the new NTUC FairPrice VivoCity, there’s a selection of pre-packaged, shelled durians for sale. Feast your eyes on all that creamy flesh: 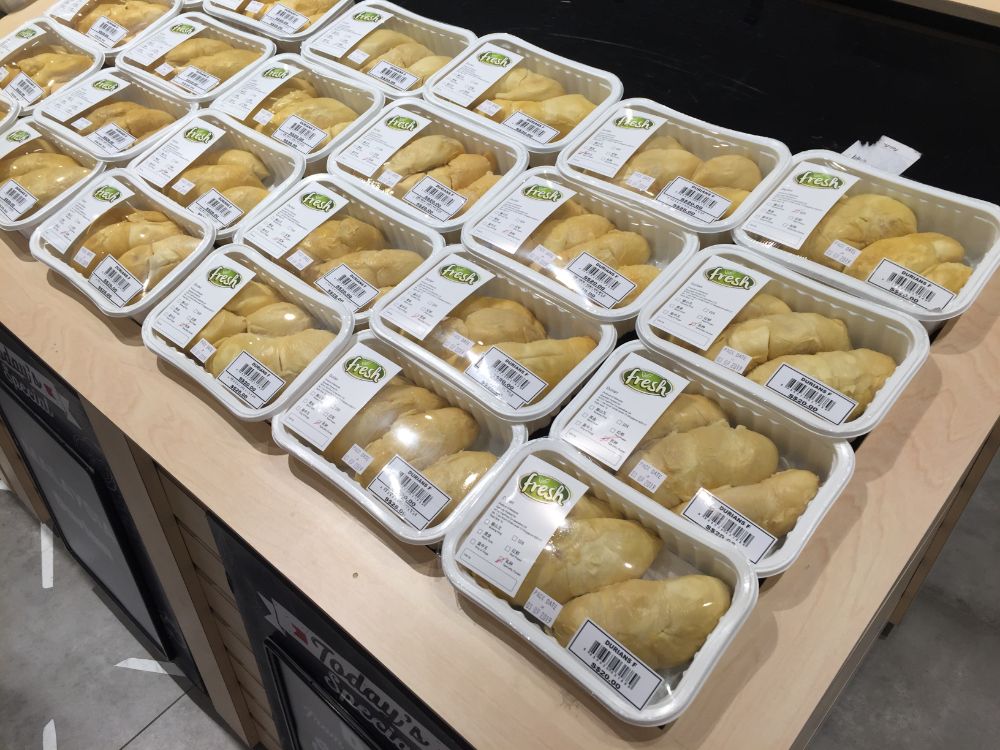 The more affordable ones are “no brand” durians (from $20 a box) but I also saw a few boxes of the coveted Mao Shan Wang around (about $50).

What’s notable is the absence of any durian smell in the vicinity (until you get really close) so I think NTUC’s durian packers are doing a really good job.

There’s also no durian uncle bellowing at the top of his lungs, so you can take your time choosing your durian with zero pressure (well, except from the Chinese tourists snapping up the MSW like it’s some hot new cryptocurrency).

Supermarkets in Singapore are notorious for using a crapload of packaging, so I was pretty excited to see this small section of bulk bins at NTUC.

Could NTUC FairPrice be seeing the light at last!?!? 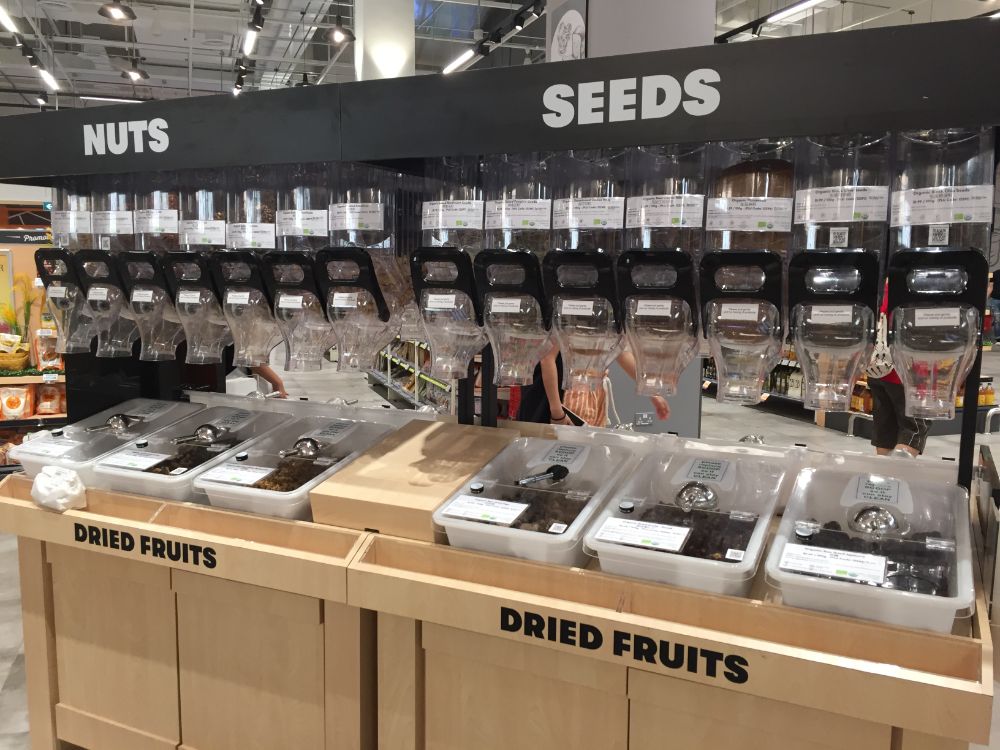 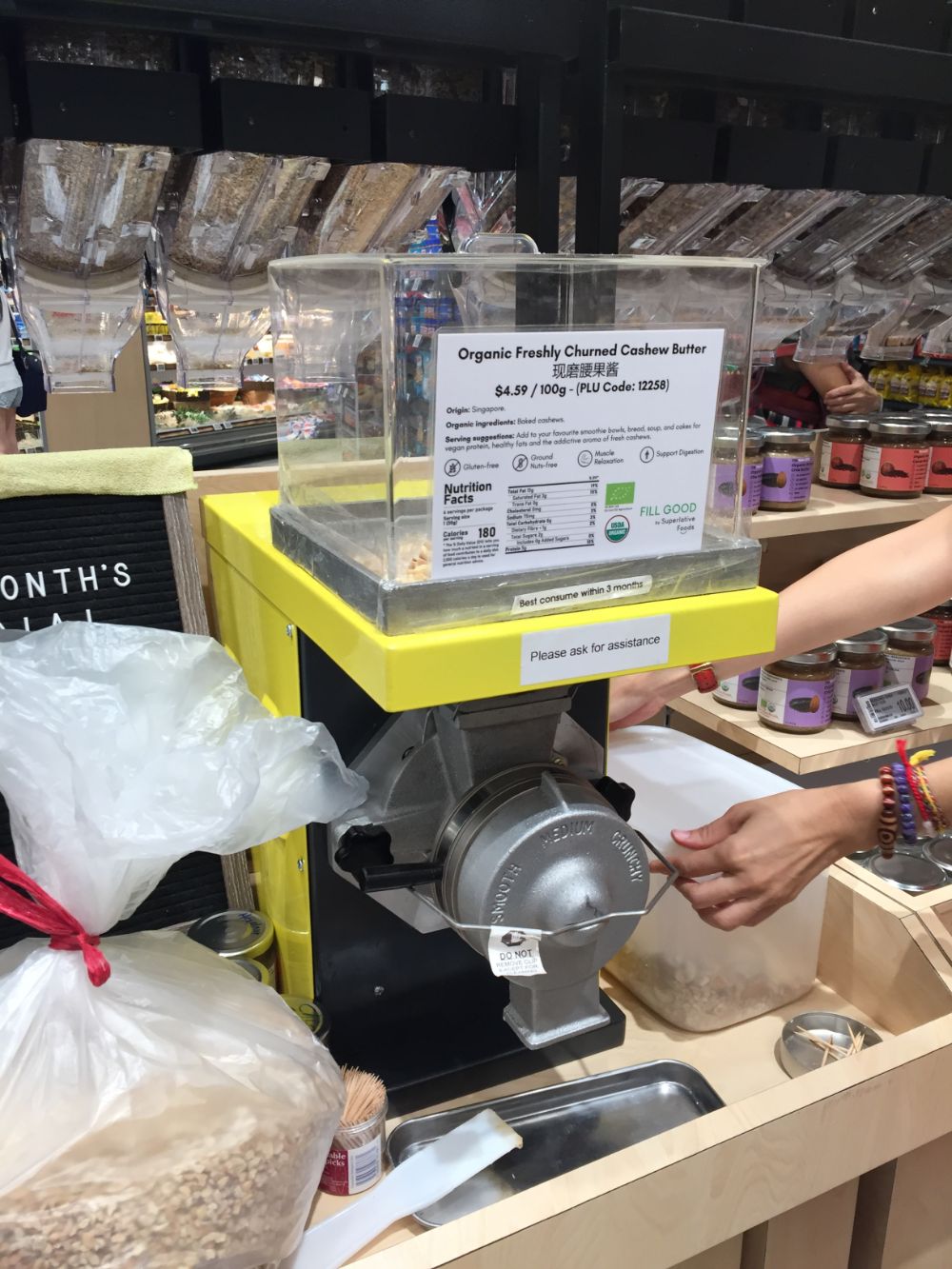 However, this bulk bin concept turned out to be rather disappointing when I asked if I could bring my own containers to fill. I got a flat “no”. Instead, you have to use their glass jars or paper bags. When I asked why they don’t allow BYO containers (since these items are charged by weight, just like the zero waste grocery stores) the person manning the counter said it’s because the container’s weight is already factored into the price.

If you’re going to use some sustainability rhetoric in your marketing and go to the trouble of implementing a bulk bin system, then at least let us have the option to BYO right.

My husband is one of those crazies who likes chopping vegetables and always laughs at me for ordering pre-cut pumpkin and sweet potato online. So when we saw the much-talked-about veggie cutting counter at NTUC, he rolled his eyes. 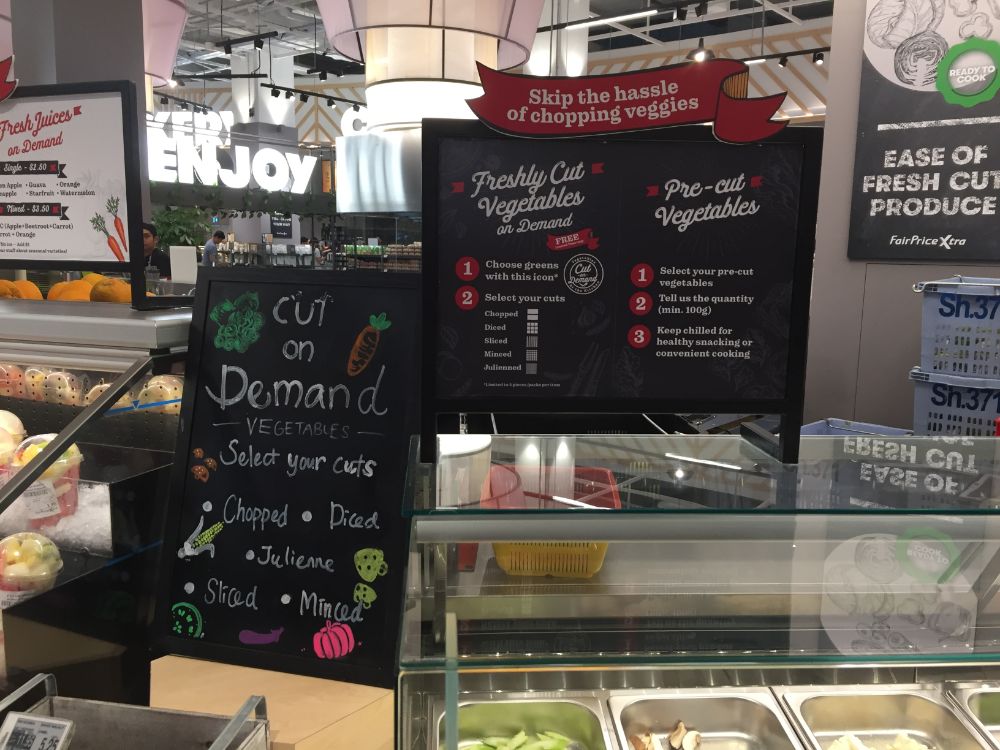 I’m all for it though. Maybe not for things like cucumber or bell peppers, but not having to smash a cleaver into sweetcorn or wash my hands 5 times after chopping garlic? AWESOME! Where do I sign up?

You can select your veggies from the regular produce section and get it cut up here — there’s no surcharge, it seems — or just go straight for the pre-cut stuff. Looking at the prices of the latter, I realised the veggies are significantly cheaper than Modern Mum (the brand of pre-cut veggies I get online) too. Score. Plus, I can get just the amount I need without worrying about what to do about the remaining 17 stalks of celery in the bag. What a great concept.

I have never bought meat or fish fresh from the supermarket counter before, but I have always assumed that they would be cleaned, gutted and cut up or minced for you. After all, isn’t that what they do at the wet market?! So I’m not sure that this “free cutting service” is really a huge deal. 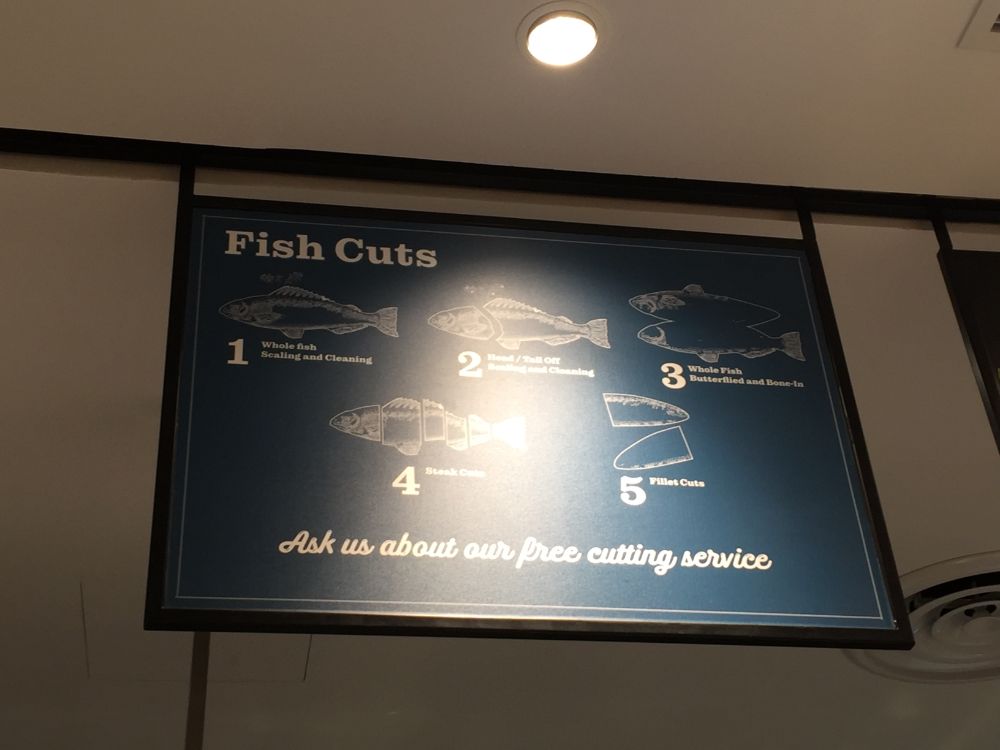 But it does make for a fresher alternative to the pre-sliced / filleted fish and meats on styrofoam trays that they sell at the chiller section, I suppose. Those always look dismal and unappetising at most supermarkets.

When I was young and pok gai, eating supermarket food was a shameful thing to do. I’d buy the smallest amount of ham possible and a loaf of the cheapest sliced bread and munch on ghetto-ass ham sandwiches while squatting outside the supermarket.

But apparently, dining in supermarkets is now a thing that can be done openly by middle-class people. Heck, even social media influencers are doing it.

FairPrice Xtra @ Vivo is the first dine-in concept in a FairPrice hypermarket. It has never been easier to shop and eat at the same time! Swipe right to check out how I did it! Choose your meat (the ones with “We can cook for you” green labels) from The Butchery, and bring it over to the Culina at The Kitchen to have it cooked with sides for just an additional $8! And ta-dah! Within a few minutes, your meal is ready to be served and you can enjoy it at their new dining space. The best thing about being able to dine in at a supermarket is that they have such a wide assortment of items and you can simply grab anything off the shelves including a beer or wine for a perfect pairing. @fairpricesg #fairpricesg #fairpricextravivo #sp

At NTUC Vivo, you can select whatever fancy meat you like, add $8, and then enjoy it as a steak on the spot at the dine-in area known as “The Kitchen”. There are also other items on the menu, but I gotta say, they’re not cheap especially considering it’s a self-service kinda place — you get your food in disposable trays and have to bin them yourselves. 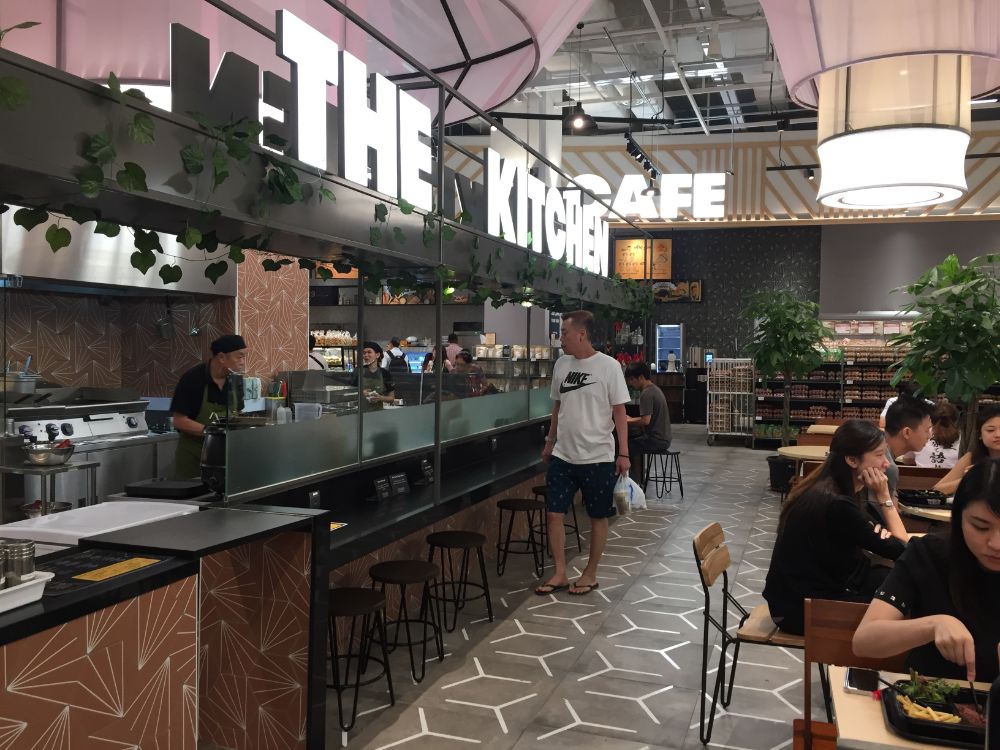 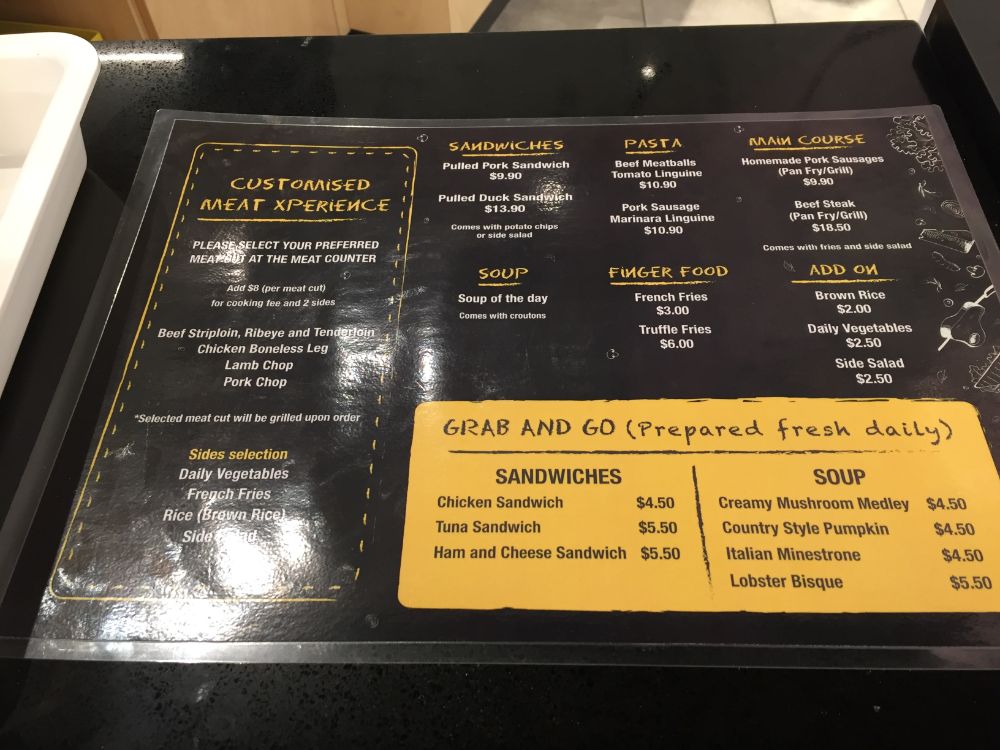 Even the ready-to-eat deli items like sandwiches can cost as much as $5.50! Siao ah! I feel sorry for broke uni students these days. 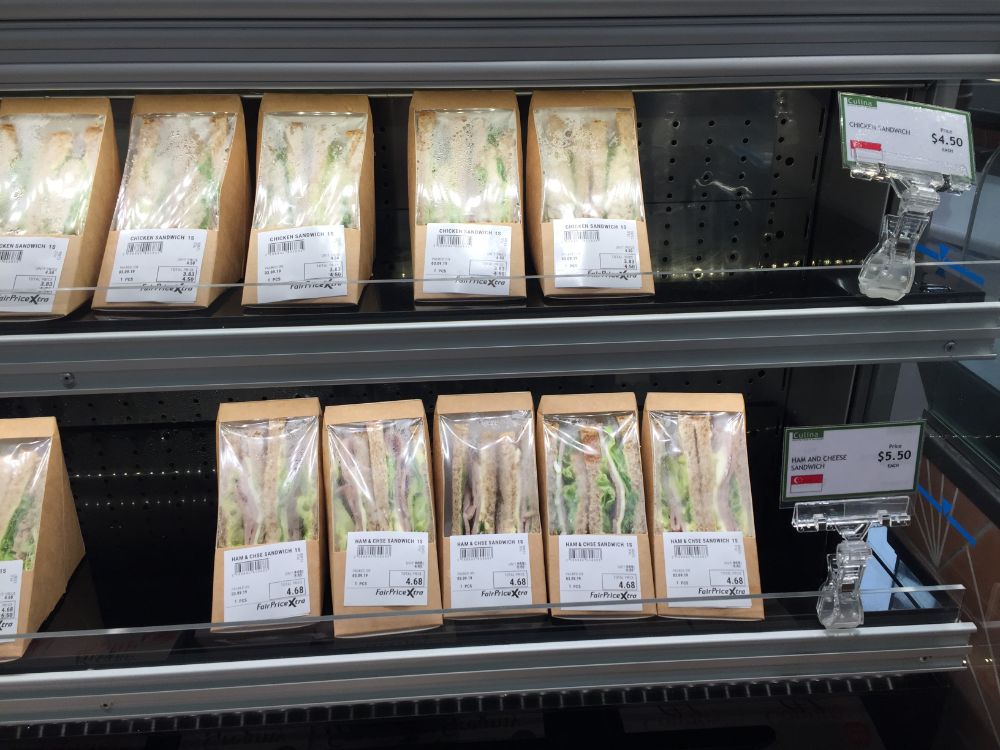 Just when you think you’ve finished exploring the massive NTUC, there’s a WHOLE EXTRA LEVEL waiting for you.

That’s right, there’s an actual level 2 to this place. But you can only access it if you manage to get past the distracting UFO machines right next to the travelators… Good luck with that. 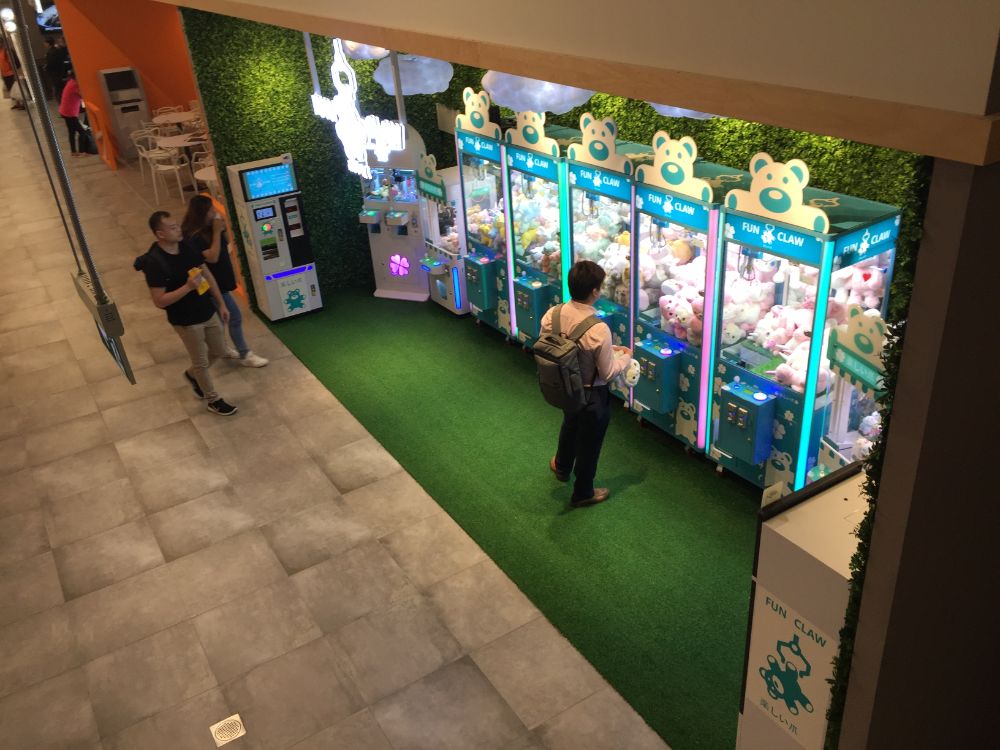 Upstairs is where NTUC has all the packaged foods and snack aisles, i.e., all the unhealthy stuff.

In addition to the regular groceries, there’s a whole lot of other stuff, like luggage, home appliances and, uh, expensive BBQ grills. (Why? Condo BBQ pit not good enough for you is it?) 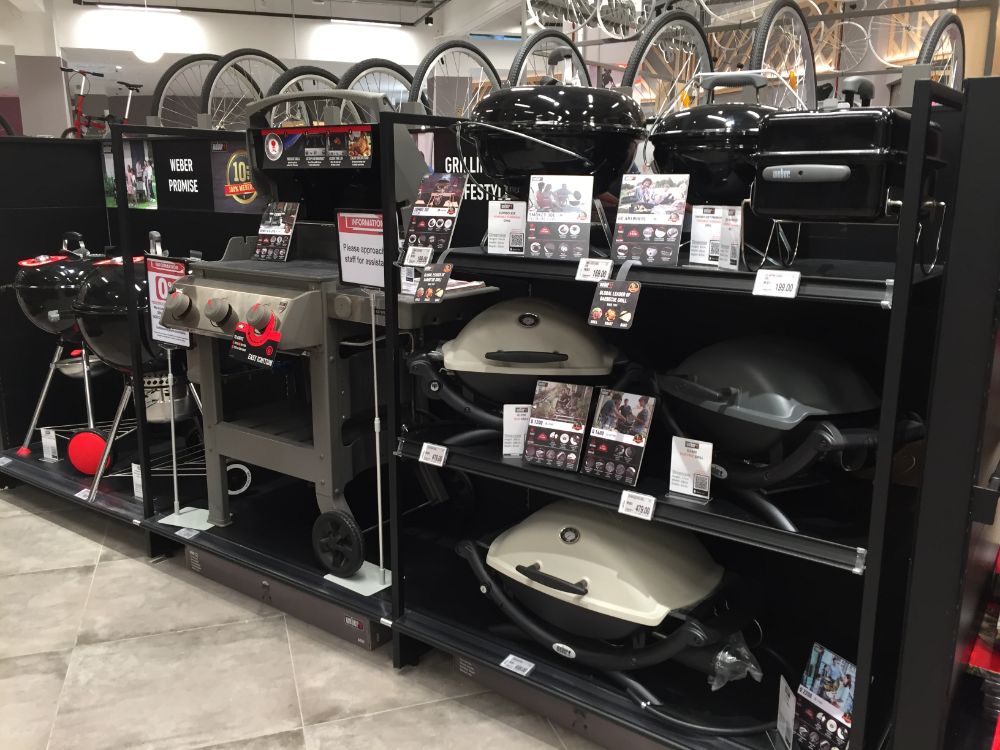 There’s also a Pet Lovers Centre Express where you can pick up pet food or litter in a pinch. However, the range is rather limited to the big mass market brands. 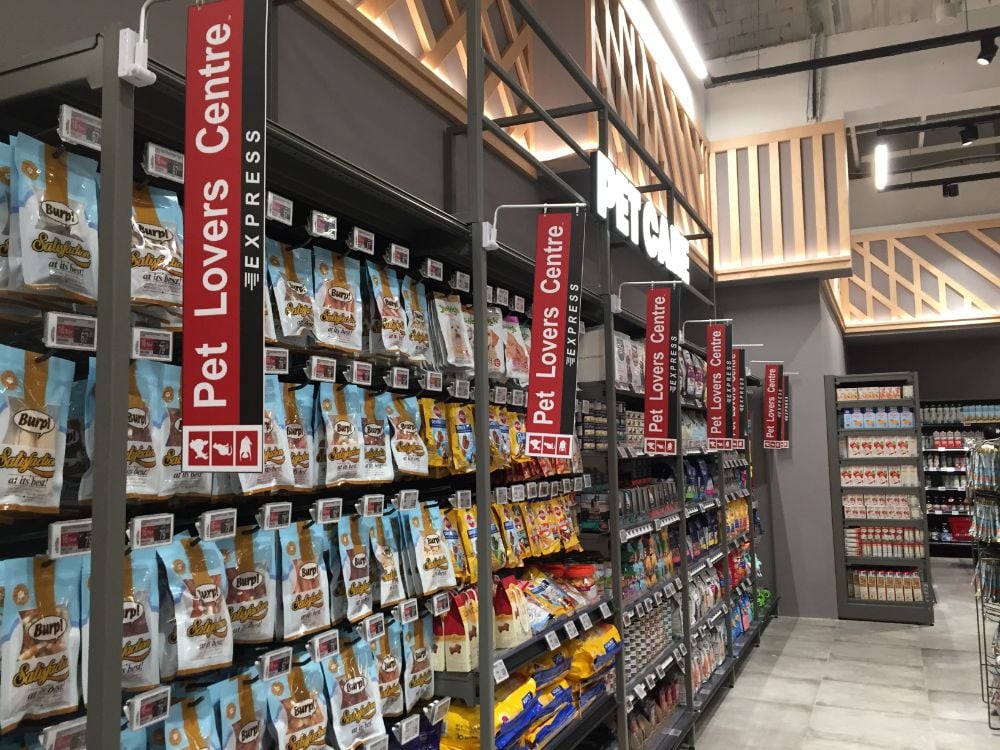 The upstairs of NTUC FairPrice is quieter and darker, and not as exciting as downstairs. Unless you’re looking to pick up snacks for your Sentosa staycation, it’s quite possible to skip this level — there are checkout counters on both floors anyway.

Overall, the new NTUC FairPrice has taken some steps in the right direction. I love the produce section with the locally-grown greens, pre-cut veggies and fresh fish filleted to order.

The bulk bins are a decent start, but I’d rather NTUC be more environmentally-friendly throughout their entire supermarket. The amount of packaging used for the fresh produce alone is rather sad. Why everything also must put styrofoam tray + double shrink wrap + plastic bag + sticker!?

The “amusement park” vibe of this NTUC really reminded me of recent hyped-up destinations like Jewel Changi Airport, Funan Mall and Habitat by Honestbee. I guess many customers like it too. Hey, if that’s what it takes for Singaporeans to eat out less and cook at home more, I’m all for it. 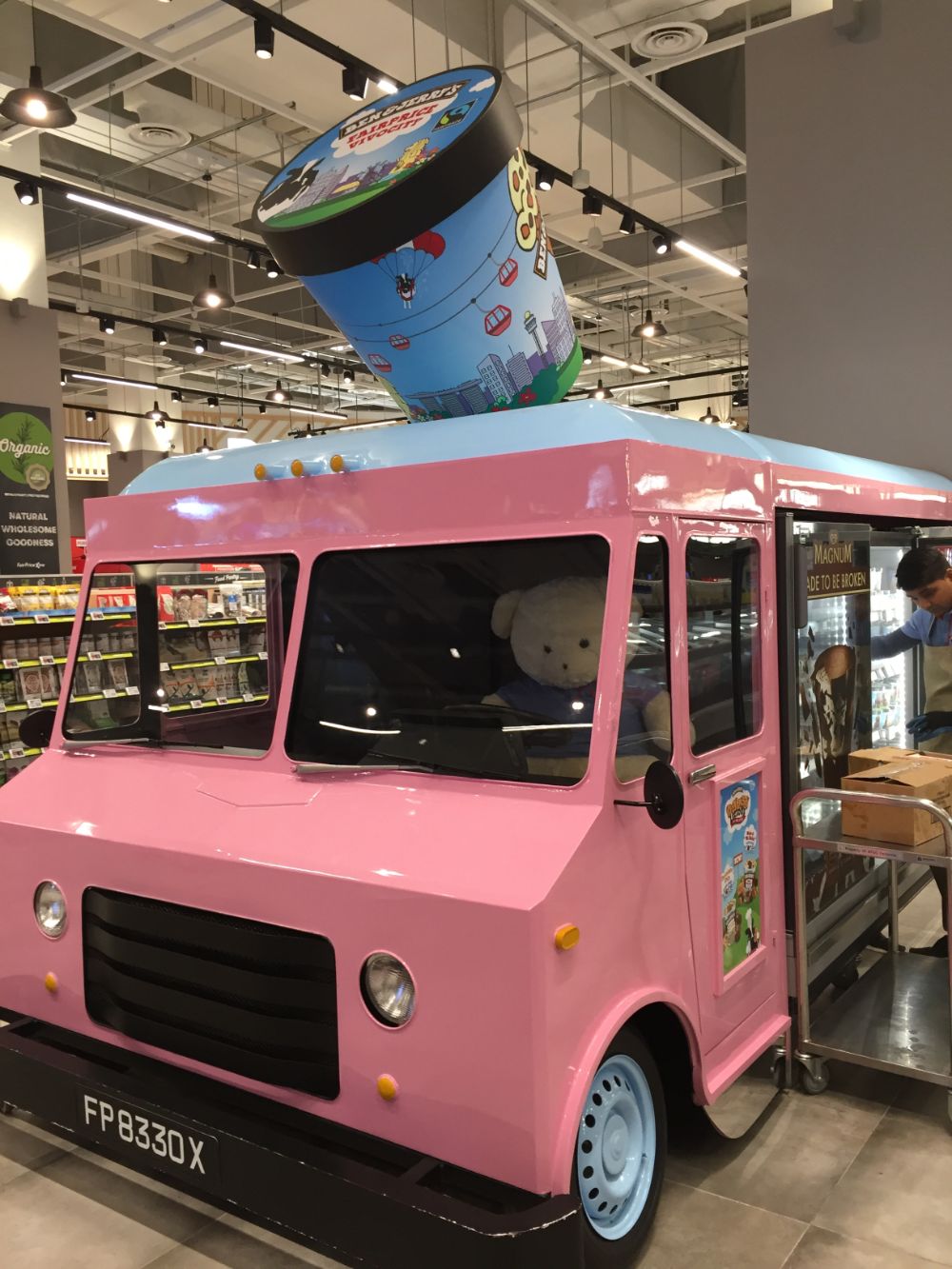 But, just like with Funan Mall and Jewel, I think one visit is enough for me.

Because as fancy as the new NTUC is, it’s not really an improvement over the offline grocery shopping experience.

Yes, they’ve thrown in a bunch of fluffy hipster nonsense, but when it comes down to shopping here, you still need to lug your basket around, bump into fellow shoppers, wait in line, get your groceries bagged, and then carry them home yourself.

I mean, why can’t I make payment and then arrange for my groceries to be delivered later? That was implemented as early as 2014 by Zalora.

These pain points are precisely why people shop online, and I can’t believe NTUC didn’t address them when they designed this “cool” hypermart.

So, as a real alternative to online grocery shopping, the pretty new NTUC gets a “swipe left” from me. I’m still sticking to Amazon Prime / RedMart / the minimart 5 minutes away from my place.

What do you think of the new NTUC FairPrice? Tell us in the comments.

Habitat Honestbee Singapore – Is This High-Tech Supermarket Worth Visiting?

Does NTUC FairPrice Live Up to Its Name? A Survey of FairPrice Housebrand Prices