If You Bought a BTO 5-7 Years Ago, Now is the Perfect Time to Upgrade

No matter what people say about the Five Cs going out of style, the Singaporean dream is still alive and well for some. Well, guess what, one of the Cs, condos, just got cheaper. If the Minimum Occupation Period of your HDB flat has just come to an end, here are a few good reasons you might be able to afford an upgrade to private property.

According to a recent news report, almost a third of the high end condo sales in the first quarter of this year were made at a loss, while the number of loss-making sales on the private property mass market rose to 7% (up from 4%) in the first three months of the year. And this is a trend that is expected to continue.

In particular, it is predicted that the price of mass market homes (that means regular condos units, not the crazy expensive ones on Orchard Road) will fall even more steeply than that of luxury condos or those close to the city centre.

At the beginning of the year, BNP Paribas analysts made the prediction that private property prices would drop by another 7% to 10% over the next two years.

It looks like it’s time for the vultures to start circling overhead.

If you’re holding on to an HDB flat right now, congratulations. It seems HDB property has proven much more resilient, so you could be looking at making a tidy pile of cash if you sell your flat right now.

Between 2008 and 2013, the price of HDB flats actually doubled. Check out this chart, compiled by a very resourceful netizen, showing median resale prices of 4 room HDB flats over the years. Of course, it’s also important to note that 2013 was the year that major housing measures and regulations were implemented as well. 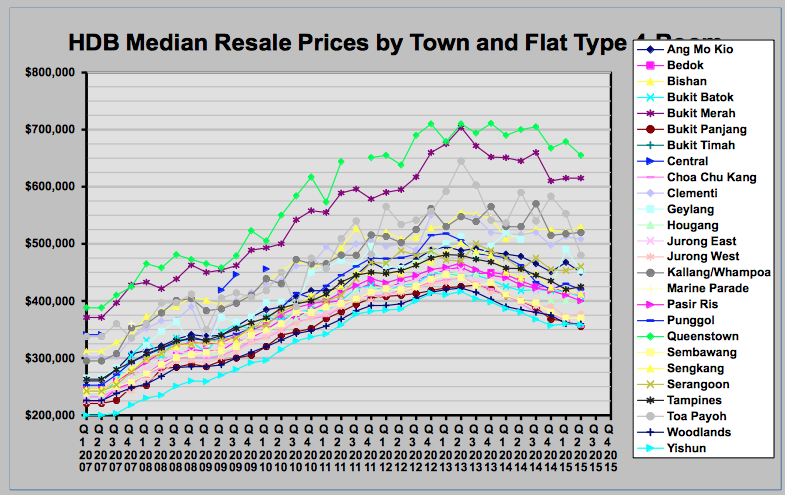 Should you upgrade to a condo?

If you look at the fall in both indexes from 2013 to 2016, you can see that HDB property has been more resilient.

For those of us who don’t like squinting at the tiny numbers on the above charts, let’s take a closer look at the resale price indexes of HDB and non-landed private property between March 2015 and March 2016. 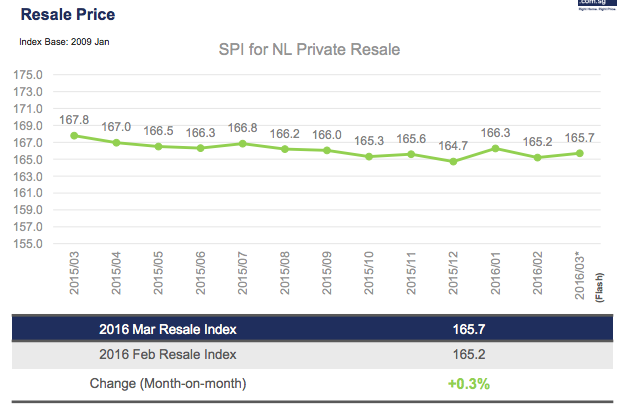 In a nutshell, the data seems to suggest that if you own an HDB flat bought in the years before the property cooling measures were implemented, you’re probably going to make a decent profit if you sell now despite the sluggish property market. And given the fact that condos are the most affordable they’ve been in many years, analysts seem to think 2016 is a good year to buy.

If you’ve ever fantasised about going for a swim after work and then walking up to your unit clad in nothing but a towel, there’s never been a better time to scare little children than the present. Just make sure you don’t give yourself a scare by making sure you have your home loan settled. It’s as simple as finding out the best home loan rates in Singapore on MoneySmart’s Home Loan Wizard.

Do you plan to buy or sell property in 2016? Tell us why or why not in the comments!