The November 2019 HDB BTO launch is coming up, and this cycle, we are looking at quite an impressive lineup of build-to-order (BTO) flats at Tengah, Ang Mo Kio and Tampines.

For Ang Mo Kio and Tampines, there’s not much to say except… “Hoot ah!”

Tengah is the only non-mature estate this round, but it seems quite popular too. The forest-themed town is touted to be Singapore’s first “sustainable town”, with eco-friendly features and hiking trails (to promote car-lite living).

As expected, Tengah has the most units and unit types for sale. Non-mature estate, mah. As expected, Tengah BTOs are the cheapest of the three, with 4-room flats starting at an “affordable” $302,000. The trade off is that you’ll probably be living in quite an ulu, underdeveloped estate for a while until Tengah is fully done up. Currently, the place is still full of dotted-line roads that don’t exist yet.

In contrast, Ang Mo Kio and Tampines only have 450 and 650 units up for grabs. They’re also a whole lot more expensive. But if you manage to get your hands on one, your new home will be much more convenient and accessible. The Nov 2019 release will be the 3rd batch of Tengah HDB BTO flats. This BTO project will include all flat types, including 3Gen, which the other 2 lack. It also has the most units for sale (3,460), so if you just want the best chance of securing a flat, Tengah is your best bet.

The interesting thing about Tengah BTO is that it’s not really as cheap as you would expect. Yes, the $302,000 starting price for a 4-room flat is a lot cheaper than mature Tampines ($394,000) Ang Mo Kio ($451,000), but considering there’s absolutely nothing there, it seems like quite a hefty price to pay.

In fact, we’ve seen better-located HDB BTOs going for just a little more than the Tengah BTOs. For instance, prices for 4-room flats in the Sep 2019 Tampines BTO started at $312,000. That’s a mere $10,000 difference! At the same-ish price, few would pick Tengah over Tampines.

A common concern homebuyers have with non-mature estates is convenience — after all, who wants to live in the middle of nowhere, right?

There are grand plans to develop Tengah into an idyllic “forest town” featuring lush greenery, waterways and amenities at every turn, but no one is exactly sure how long it’ll take to make good on this “promise”.

Tengah is often compared to Punggol, but that doesn’t really inspire confidence. Especially since Punggol still relatively inaccessible today despite being in “development” for so long.

If you’re willing to take the risk — perhaps you think it might be a good investment — future developments include the upcoming Tengah Planation MRT on the Jurong Region MRT line (estimated 2026 completion).

It’ll be 4 stops from Jurong East MRT, which is an interchange and is where the big shopping malls JEM and Westgate are. Probably the most anticipated of the bunch is the Ang Mo Kio BTO. Like the orange crackers in a bag of mixed nuts, this is a rare gem. The last time HDB released an Ang Mo Kio BTO was 3 years ago, in May 2016. Units are also scarce, with only 450 units this round.

Putting two and two together, the prices are also likely to be the most expensive. Even though it’s from a while back, the price of a 4-room Ang Mo Kio BTO from the May 2016 launch was already $382,000, which is significantly higher than the prices of both Tengah and Tampines flats from the recent cycles earlier this year.

Do note that there are only 2- to 4-room options, so if you prefer a bigger 5-room flat, this Ang Mo Kio BTO project doesn’t have it.

Let’s consider the location and nearby amenities to decide if it’s worth the hefty price tag.

Although along Ang Mo Kio Ave 9, the nearest train station is Yio Chu Kang MRT. It’s only about 500m away, which is a short 5-minute walk.

Yio Chu Kang MRT is on the north-south line, which connects directly to the town area. It’ll take 19 minutes to get to Orchard MRT, and 27 minutes to the CBD (Raffles Place MRT).

It’s also where the Yio Chu Kang Stadium, Swimming Complex and Sports Hall are, which is great for families.

There are no major shopping malls nearby; Ang Mo Kio Hub is the closest, 3km away. It’s not a trendy, fashion mall, but it does have a lot of food options and a huge Fairprice Xtra.

But perhaps the most noteworthy thing is how many popular schools there are nearby. If you move there, your kids can literally study in the area until university.

The BTOs are opposite Anderson Primary School, next to Presbyterian High School, and a stone’s throw away from Anderson Serangoon Junior College and Nanyang Polytechnic.

There’s also going to be an upcoming Lentor MRT station that should be ready by 2020. It’ll run on the Thomson-East Coast line. 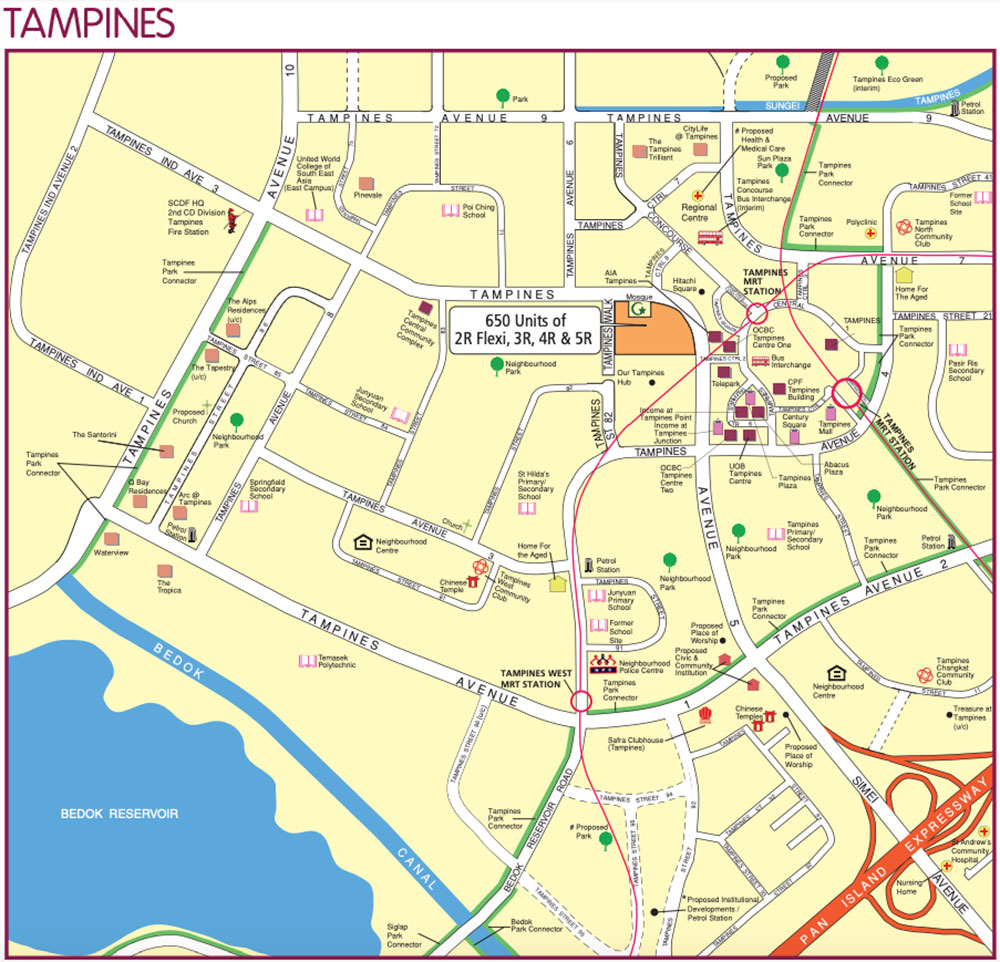 HDB has been building new flats (literally) all over Tampines. One never really know if the next “Tampines BTO” will be located in central Tampines or in… well, god-forsaken Tampines.

I know that some older Tampines BTOs had relatively poor locations (i.e. far from MRTs and other amenities), but this time, it’s only 650m away from Tampines MRT and interchange, and 1km from the cluster of shopping malls.

I’m not super familiar with Tampines, but I always got the impression that it was sort of overcrowded. That HDB could squeeze out some more space in such a prime area is a welcome surprise.

If you don’t want to fight the crowds at the main Tampines Central, these BTO blocks will be right next to Tampines Hub, which a small almost-mall by People’s Association. You can pick up your groceries from the Fairprice there.

The flats will also be flanked by the Masjid Darul Ghufran mosque and the Tampines Swimming Complex. The area also has quite a few tuition and enrichment centres for children, like Heguru Education, British Council and more.

This Tampines BTO project has all the flat-type options except 3Gen, but has only 650 units. That’s slightly more than Ang Mo Kio, but still only 1/5 of Tengah.

Which HDB BTO should you choose?

If you’re torn between the 3, here’s a helpful overview of each one’s key selling points and who they’re most suited for.

If you’re on a tight budget and just want a home, go for Tengah. Not only are the prices are likely to be the lowest in this HDB BTO launch cycle, it’s also got the most available units so you have a better chance of getting a ballot number. Be prepared to live with at least a few years of inconvenience though – the public transport infrastructure will take a while to develop.

If you don’t mind paying more for convenience, you can try your luck with the 2 mature estates. Comparing the nearby amenities and MRT stations, I think the projects in Ang Mo Kio and Tampines are on par. Tampines is likely to be cheaper though, so it provides more value in that sense. There are also more units.

The main edge Ang Mo Kio has is that it’s right smacked in the middle of Singapore, so if your family has to travel to different ends of the island — say one of you works in the East and the other in the West — this may be much more convenient.

I anticipate ridiculous competition for the mature estates, so if you intend to apply for them, do manage your expectations — confirm oversubscribed one.

And they’re out! Here’s how to apply for the BTO of your dreams

You do not have to rush to apply. As long as your application (+ $10 admin fee) is submitted by 18 Nov, you’ll have a chance in the “BTO lottery”. Lucky winners will be invited to HDB for flat selection.

For more details on eligibility, finances & other admin matters, here’s a more comprehensive guide to applying for a HDB BTO.

In your opinion, which is the best HDB BTO area? Tell us in the comments below!

HDB BTO Status Symbols – How Much Would It Cost to Buy Them All?