What with all the Avengers: Endgame and Game of Thrones memes floating around, you might have missed the update that HDB is about to launch 3 new BTOs in May 2019.

The two big ones are the Kallang/Whampoa BTO – a straight-up sequel to the box office smash that was HDB’s Feb 2019 BTO launch – and the Tengah BTO – also an anticipated follow-up to the oversubscribed first Tengah release in Nov 2018.

Apart from these two giants, there’s also an under-the-radar Woodlands BTO which might be more a feasible and economical option. Read on for our review of each project (prices included):

HDB has just released the prices for the May 2019 BTO launch. Here they are. Note that these are the starting prices (“from $X”) so the price of your actual unit may differ.

While updating the HDB BTO prices, I noticed a couple of things:

Meanwhile, Woodlands BTO prices remained pretty constant – I checked them against the Nov 2018 BTO launch in nearby Canberra and they’re about on par.

You draw your own conclusions – but I believe HDB might be exercising “surge pricing” because both Kallang/Whampoa and Tengah were oversubscribed in the previous rounds.

While I’m sure a some of these are just honest-to-goodness Singaporeans looking for a home, I’m just as certain that a good number of these enthusiastic applicants are wannabe house-flippers looking to strike it rich – perhaps inspired by the latest million-dollar resale flats.

If that’s the case, then they’ve ruined it for everyone. Thanks a lot, man. 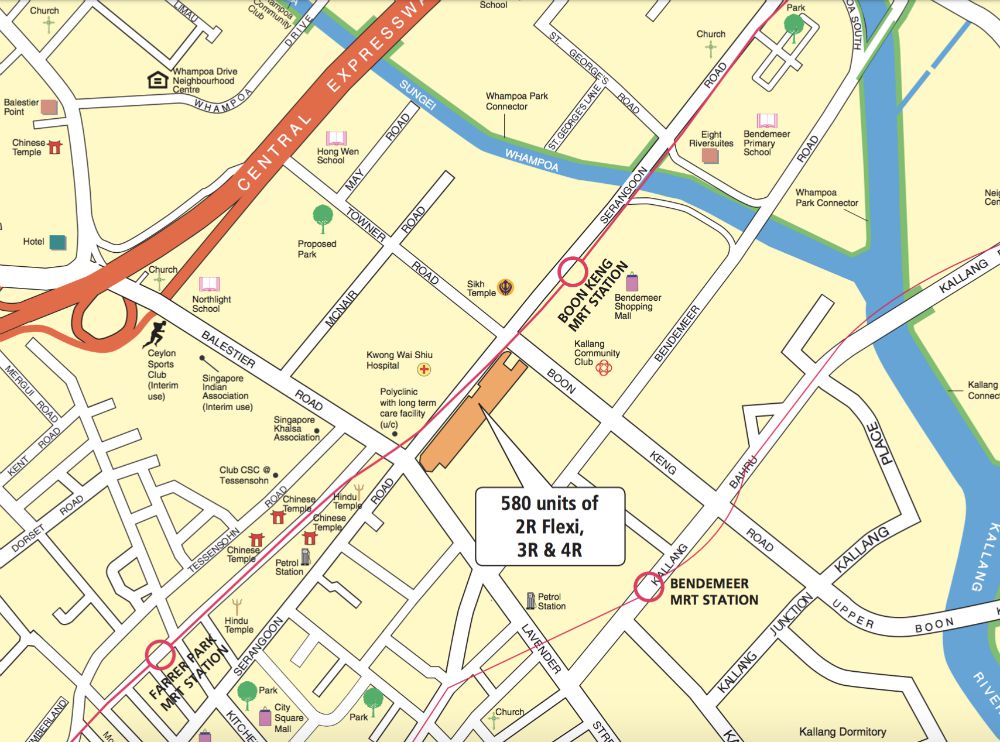 In February, HDB launched 850 BTO units in the super-central Kallang/Whampoa district to great national excitement. A whopping 7,084 people applied for these ultra-coveted BTOs. You do the math.

If you were one of the 6,000+ unsuccessful applicants from the previous HDB BTO launch, here’s your second chance: HDB is releasing another 580 units in Boon Keng.

This batch is going to be just as hot, though, because it’s right next to the MRT station and all the amenities nearby.

For the uninitiated, Boon Keng is an ultra-mature estate sandwiched in between the rapidly-gentrifying Farrer Park and Potong Pasir towns, so you can bet loads of people will be eyeing this as an investment home.

Being very central, it’s also certainly a very convenient to live in yourself, though it’s more suited to young professionals without kids, or perhaps older couples whose kids are grown up. There isn’t much by way of childcare centres and the like over here. We got the first glimpse at the new HDB town of Tengah in Nov last year, when HDB launched the first batch of 1,620 Tengah BTO units, called “Plantation Grove”.

What was notable about the Tengah BTO launch was that, although there’s absolutely nothing in the vicinity, the flats weren’t really all that cheap. The starting price for a 4-room BTO flat in Tengah was $290,000, significantly higher than counterparts in existing estates like Sembawang ($251,000) and Yishun ($259,000).

We’re expecting a similar response and pricing for the latest batch of Tengah BTOs – a massive 2,180 units.

For wannabe investors expecting a “repeat performance” of the Punggol/Sengkang success story, bear in mind that you’ll have to wait about two decades before Tengah will fully mature, so it’ll be some time before you can cash it in. My personal favourite among the May 2019 HDB BTO launch is the Woodlands BTO, which also happens to be the (projected) cheapest option out of the bunch.

That’s because the batch of 720 units here is located just a couple of minutes’ walk from the upcoming Woodlands South MRT station on the Thomson-East Coast Line. The station is slated to open by the end of 2019, so shrewd types might want to ballot for this one before the price goes up.

As long as you don’t mind living in the far north, I think the Woodlands area is also sufficiently developed to offer a decent quality of life.

There’s a shopping mall, a bunch of schools, supermarkets and shops, even a park connector linking the development to the main town centre (Causeway Point and the bus interchange) around Woodlands MRT station.

One foreseeable problem is that there are only 720 BTO units being launched, which means there might be significant competition. Well, here’s hoping that everyone will try for the Boon Keng and Tengah BTOs and give this one a miss.

You have a week to review all the information before making your choice. Yes, you can only choose 1 town, so choose wisely! Don’t kan cheong though – it’s NOT a first-come-first-serve kind of thing. As long as you submit your application by 28 May, you’re in.

When you submit your BTO application online, you also need to pay a $10 admin fee. And if you win this round of HDB’s “lucky draw” (ballot), you’ll get invited to come down and choose your unit.

Still blur? Check out our complete guide to applying for an HDB BTO.

If you don’t want to fight the hordes of people trying to whack the Kallang/Whampoa or Tengah BTOs like it’s the TOTO Hong Bao Draw, consider going for the Sale of Balance Flats which also has the same application window.

These are flats left over from previous BTO launches and there’s a lot to choose from, even in coveted mature estates like Queenstown and Geylang! If you need a flat urgently, consider Tampines, Yishun or Sengkang as these have the most balance “stock”.

If you’re still unsuccessful, don’t worry – HDB has upcoming BTO launches in August and December and they’ve already put up some info so you can start planning. For easy reference, they are:

Which HDB BTO tickles your fancy? Tell us in the comments!