Sushi aficionados would already know this, but Sushiro — Japan’s largest conveyor belt sushi chain — has finally hit Singapore (19 Aug 2019)! The chain has 530 outlets around the world, but the local one at Tiong Bahru Plaza is their first in Southeast Asia.

Sushiro is known for being delicious and ridiculously affordable in Japan, where prices start at just ¥100 before tax, which is about S$1.30. How does the Singapore Sushiro compare? Is it as cheap? Will it put Sushi Express out of business?

Let’s compare them to find out. Heck, we’ll even throw in Sakae Sushi, Nihon Mura and Genki Sushi into the mix to find the most value-for-money sushi restaurant in Singapore.

Of course, all Japanese restaurants serve sushi and sashimi, but for this, we are focusing on affordable, casual dining at conveyor belt sushi chains.

All prices stated above exclude GST and service charge, which means prices start at about $2 to $3 per plate after taxes.

At Sushiro Singapore, prices start at $2.20++, which a little more than ¥100, but still competitive considering the quality of the food — the ingredients (like the sashimi!) are all imported from Japan. There are over 100 varieties of sushi, most of which fall in the $2.20++ to $3.20++ range. 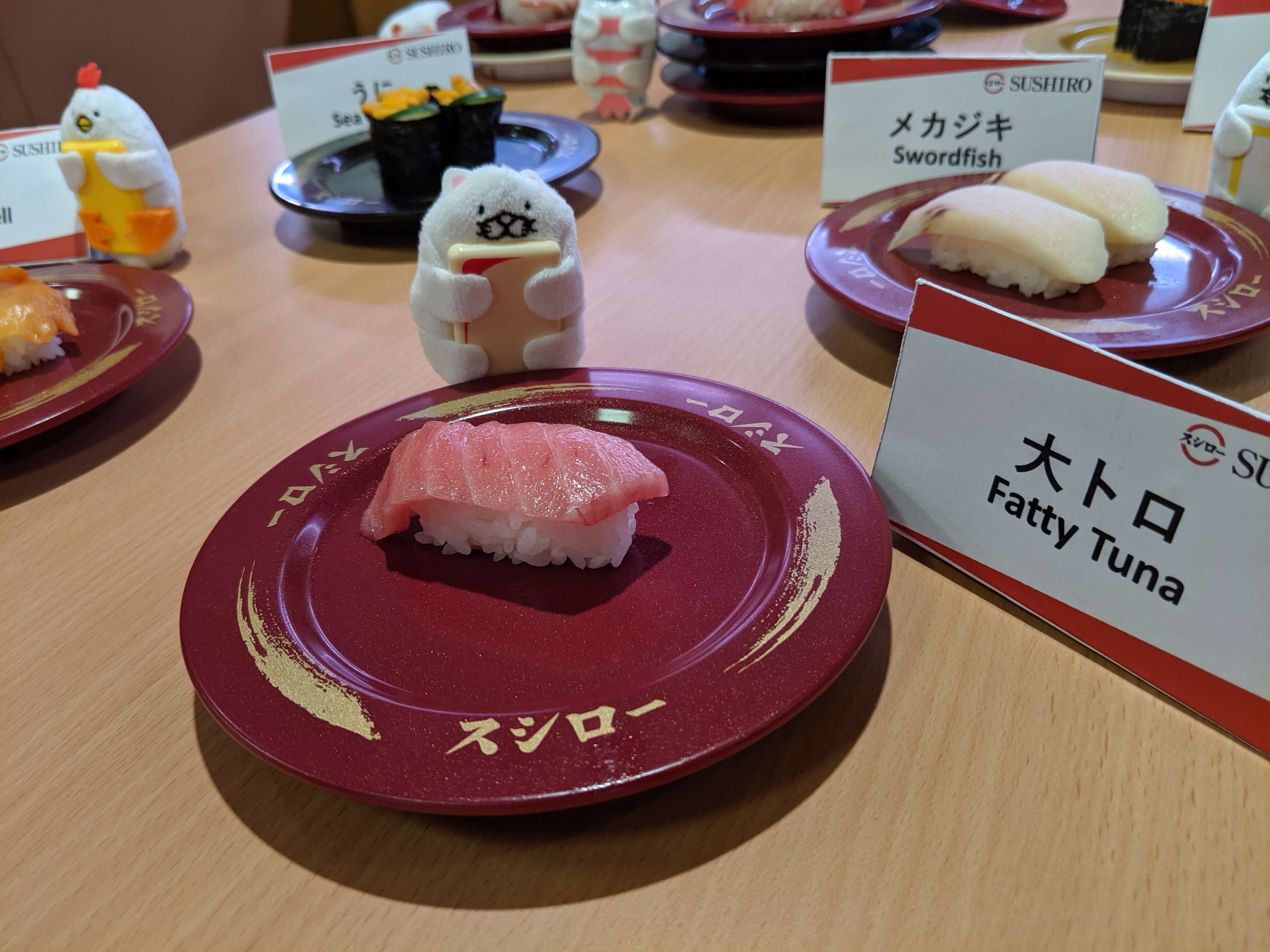 I’ve tried it, and I am super impressed. I especially loved the Otoro fatty tuna sushi which is just $2.20++ during the opening promotion (UP $4.80++). It was sweet and creamy, and the fish-to-rice ratio was great. They are generous with the fish — the thick slices are like the kind that’s usually served on platters.

Another noteworthy item is the chawanmushi, which is only $3.50++, but has sweet prawns and a big scallop in it.

There are 2 conveyor belts: one for everyone to use, and one that directs items (that you order on the tablet) to your table. Kind of like how a train pulls into a station — it’s quite fun!

There’s an added bit of technology to up the game even more: each plate (travelling on the belt) comes with an IC chip embedded. The chip tracks the plates’ journey on the belt, ensuring it doesn’t go round the belt for more than 350m.

I have close to no concept of distance, but judging from the 3 rows of seats the belt covers, it looks to be about 1 full round around the restaurant.

Sushi Express — $1.50++ for everything, cheapest sushi chain in Singapore

With everything at $1.50++ per plate, Sushi Express is the cheapest conveyor belt sushi chain in Singapore. It’s literally the Daiso of the F&B world.

The menu mostly consists of sushi, sashimi, sides (more like appetisers) and desserts. There are crowd favourites like salmon sashimi, salmon aburi sushi, and more, but they don’t have things like rice bowls and noodles. They also don’t offer chawanmushi (steamed egg), which was disappointing. 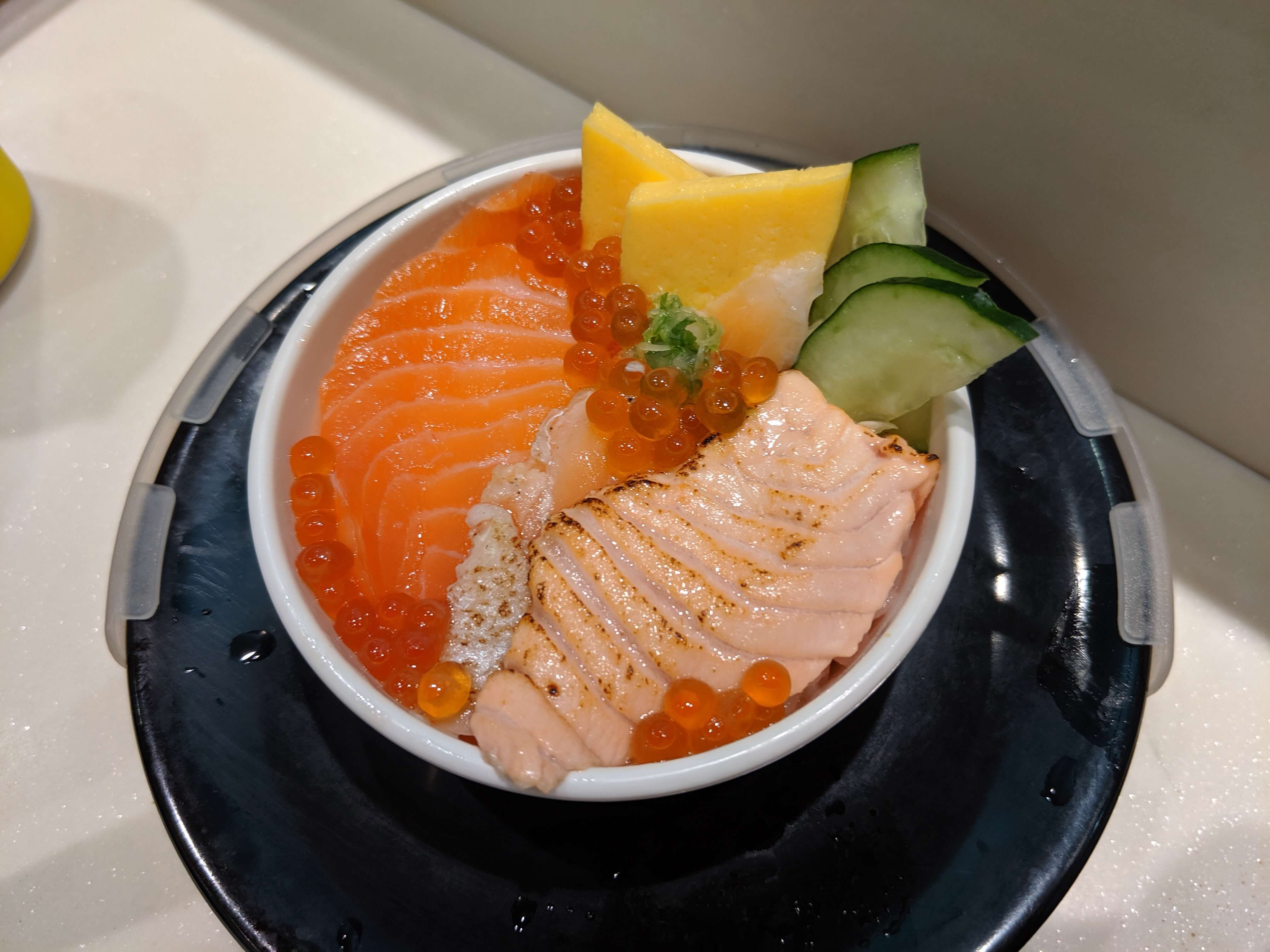 Occasionally, they have seasonal dishes. When I went, they had a mini salmon rice bowl. It was considered 2 plates, making it $3++.

There’s only 1 conveyor belt for everyone and you can’t order your dishes, where you sit at Sushi Express is kind of important. If you want something that’s not on the belt, you’ll have to tell the waiter and they’ll tell the kitchen, who will then put it out. So if you sit far away from the kitchen, it may not reach you.

(Don’t laugh, it always happens to me!)

Quality-wise, I personally find Sushi Express a little lacking. I’m no food connoisseur, but even I can tell that their dishes are not as tasty as others. It’s fast-food sushi, and you can really tell. However, all in all, considering the cheap price tag, it’s not half bad. I actually dine there pretty often.

If you have an army-boy appetite and could polish off 15 plates in one seating, then this is a great option. Anywhere else, you’d spend a bomb.

The selection is slightly better than Sushi Express: aside from the usual suspects, there are dishes like fried chicken (tori karaage namban), salmon cheek (salmon kama karaage) and more.

If you don’t want to pick plates off the conveyor belt, there’s a small tablet on each table for you to order what you want. Those ordered will be served to your table, which, although defeats the purpose of the conveyor belt, is much more effective at getting your dishes to you quickly.

Nihon Mura Express is best known for their birthday promotion: for every year of age you are, you get to order a plate for $1++. That means that if you’re 30, you can have 30 X $1++ plates. It’s only valid at the Kallang Leisure Park and Rivervale Mall outlets though.

Genki Sushi’s conveyor belt system is called the “Kousoku Express”, and like Sushiro’s, it delivers your orders to your table, so every order is freshly prepared. 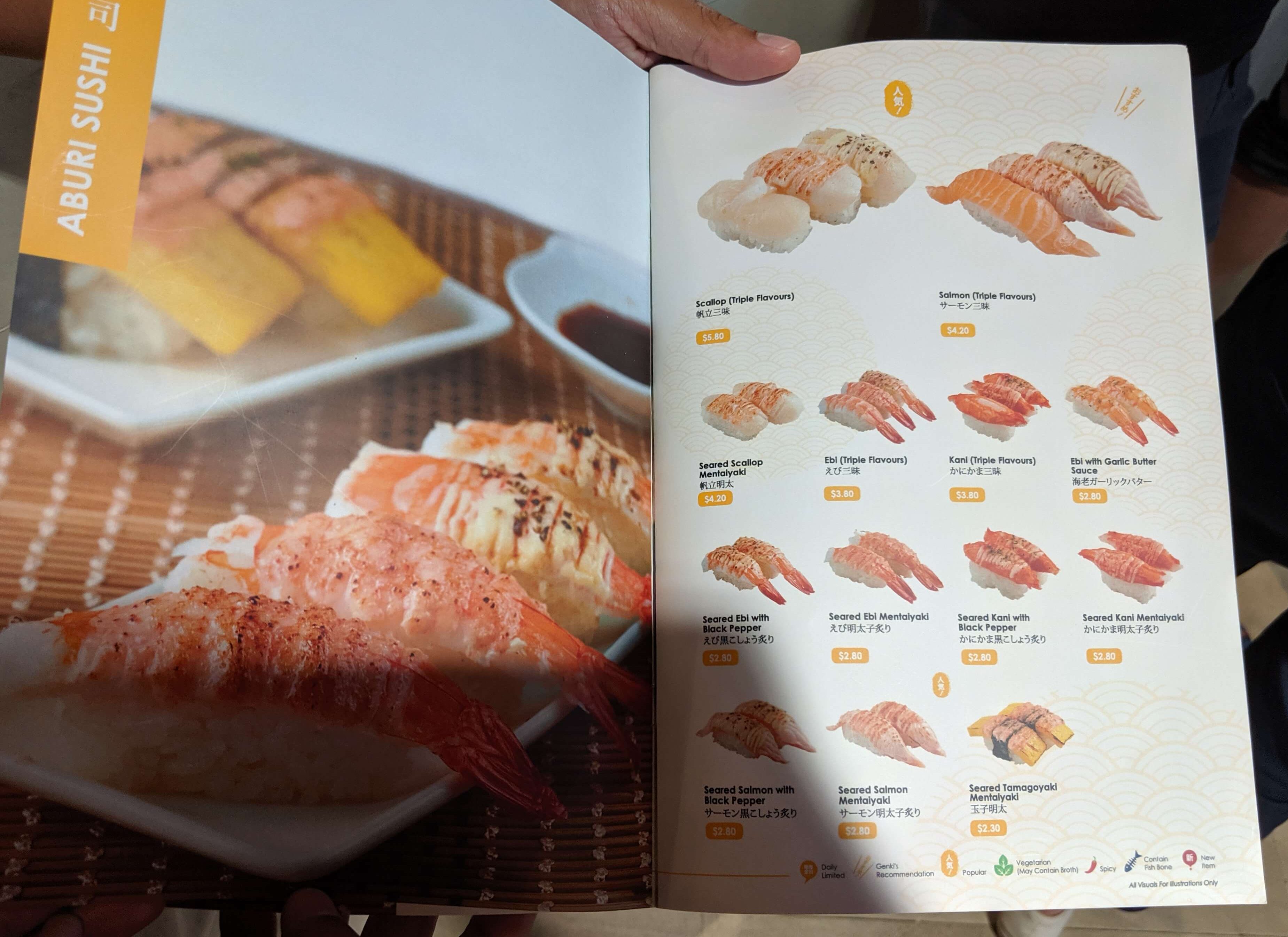 The sushi dishes are quite competitively priced, with most items under $3. They also have quite a good selection — if you’re a fan of mentaiko (pollock roe), they have seared mentaiko salmon, crab stick and shrimp for just $2.80++, which is very affordable.

However, I find the sashimi a tad expensive. The salmon, tuna and swordfish sashimi are $5.80++ for a plate of 4 slices. The more premium cuts (like salmon belly and yellowtail) are $7.80++.

That’s comparable to full-fledge Japanese restaurants like Sushi Tei and the likes.

What is a sushi listicle without Sakae Sushi, right? Sakae Sushi is one of the longest-running Japanese restaurants in Singapore!

I’ve not been to Sakae Sushi in a while — it really is more of a student hang-out spot — but based on a quick survey in the office, it’s still just “meh”. The sushi isn’t fantastic, and it isn’t the cheapest. Prices start at $2.39++ for most sushis. The salmon sashimi is $6.39++ for 4 slices.

Sakae Sushi used be popular for being one of the more affordable options, but since Sushi Express’ entrance into the game, it’s fast phasing out (in my opinion anyway).

It’s a full Japanese restaurant though, so they’re still relatively cheap for dishes like rice bowls, noodles and other mains. Many people go to Sakae Sushi for their delivery platters too. They feed 2 to 3 pax, and cost $66 to $77 (about $20+ per pax).

Which is your favourite sushi chain? Are you excited to try the newly opened Singapore Sushiro? Tell us in the comments below!