3 Most Surprisingly Fuel Efficient (and Inefficient) Cars in Singapore

If you want to commute in Singapore without feeling like you’re desperately trying to hop onto the last lifeboat leaving the Titanic every morning (ah, nothing like rush hour on the MRT), you’ve got to pay the price – the hideously inflated price of a car that is.

If you’re looking to buy a car because you need to commute to work and pick up the kids from school, fuel economy is important because more driving = higher fuel costs.

On the other hand, if you care more about the mating habits of the potoo bird than you do about fuel efficiency, you’re probably basing your selection on appearance – and the best-looking cars also tend to be the most fuel inefficient (unless we’re talking about the Tesla Roadster).

Here’s a look at Singapore’s 3 most fuel efficient and inefficient cars: The Peugeot 208 won’t win any awards for attractiveness. In fact, you can call it the anti-Porsche because it’s the complete opposite in almost every way – speed, looks, and handling. But that’s not a bad thing. That’s because in this “Tortoise and Hare” story, the Peugeot will still outlast the Porsche every time when it comes to fuel economy. The Citroen DS5 delivers almost the same fuel economy as the Peugeot 208, but with better performance, comfort, and yes… looks. Of course, all that good stuff comes with a price tag that’s about $70,000+ more than the Peugeot. So if you’re looking for a car with premium features and fuel economy that costs $100,000-$200,000 less than more popular German models, it’s worth checking out. The Toyota Prius has been on the market for more than a decade as one of the world’s first mass-produced hybrid vehicles. It’s also one of the most divisive cars among drivers today because of its “unique” appearance. Whether you think the Prius is “ugly” or you can suppress your ego and vanity enough not to care about appearance, it’s a car that’s built for one thing – lower fuel consumption. 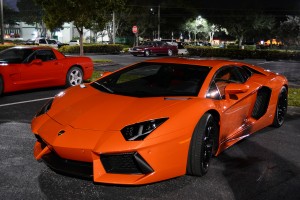 The Lamborghini Aventador is nothing short of a jet engine on wheels. I’m not kidding. Lamborghini’s chief designer actually based his design concept on the F-22 and F-35 fighter jets. Then again, why does anyone buy a Lamborghini in the first place? It all goes back to some Top Gun or race car driver fantasy where you’re obliterating other commuters on the road – and burning a ton of petrol in the process. The Maserati Quattroporte is a luxury 4-door sedan with a secret – it has the engine performance of an Italian sports car with a 523-HP V8 engine. That makes the Maserati Quattroporte pretty appealing to car drivers who want a safe and comfortable car they can use to drop off the kids and live out their race car driver fantasies – at the cost of poor fuel efficiency.

References:  For this article, all fuel efficiency data was collected from LTA fuel economy data. Fuel costs were calculated from the Shell station price board.

Final Note:  There are plenty of reasons to buy a car other than just fuel economy, but with oil being an unstable commodity that’s subject to rapid price changes, fuel savings definitely shouldn’t be ignored.

On a better note, it’s not that hard to save even more money on buying a car. Just check out MoneySmart to find a car loan with the best possible interest rate and visit the insurance section to find the right car insurance policy to fit your needs and budget.

Is fuel efficiency one of your top concerns when buying a car? Share your comments here!

Transportation
The Cheapest Parking Rates in Orchard Road for Cars
Sign up for our newsletter for financial tips, tricks and exclusive information that can be personalised to your preferences!