Co-Living in Singapore — How Much Does Rent Cost at Hmlet, Lyf & Commontown?

In pre-Zuckerberg times, there was no such thing as “co-living”. There was only “flat-sharing”, which was what you did as a broke college student with no money.

Back then, it was the dream to have enough money to afford your own space. What could be cooler than NOT living with your god-awful housemates who spill beer in your shoes and leave BBQ sauce residue on your chocolate chip muffins in the fridge?

But in 2019, it has somehow become cool to share your personal space with complete strangers.

Enter “co-living”, which is probably the natural conclusion of “co-working”. Everyone’s so casual and chummy, might as well get into bed with one another, right?

Here’s a look at how much it costs to live at popular co-living spaces in Singapore.

How much is rent at co-living spaces in Singapore?

That’s… Actually not too bad. I was expecting co-living spaces to charge a hefty premium for the glamour of living in a Crate & Barrel showroom with hot flatmates.

True, it’s definitely more expensive than, say, splitting the rent for an HDB flat. But the rent is not completely unthinkable either, considering they’re all condo apartments with full amenities, nice furniture, utilities and cleaning services all included.

Of the numerous co-living startups in Singapore, Hmlet is probably the best-known one. You might have come across the recently opened Hmlet Cantonment, a co-living space in Tanjong Pagar which I can only describe as “if Yoga Movement opened a boutique hotel”.

Actually, Hmlet has been in the rental property management business for a while. The Hmlet website lists homes in 49 (at last count) properties around the island. Everything is very aesthetically pleasing, with tons of houseplants, rattan swing chairs and bar tables.

The cheapest co-living rooms (single bed “Pocket Rooms”) start from $1,000/month, but you can opt for more spacious rooms or entire apartments.

A much-talked-about rival to Hmlet, Cove is a startup co-founded by someone or other from Lazada, a “pedigree” that’s bound to make wannabe VCs steam.

Similar to Hmlet, they list a whole bunch of rentals in different locations around Singapore. It’s possible to get a Standard Room for as little as $1,000/month if you choose a less central location.

Cove’s homes are a bit less cutesy than Hmlet and have a bit more of a grown-up, minimalist vibe. It also claims to offer a “flatmate matching” service which is a big plus for sociable types (and maybe lonely singletons).

85 Soho is supposedly a co-living company with a few properties in the central area, but I couldn’t find any information or rates apart from their Boon Lay property, which I’m guessing is mostly aimed at the NTU crowd.

If that location works for you, this co-living space has by far one of the most affordable studio apartments (i.e. no need to share toilet) in Singapore, starting from $1,200/month.

The co-living aspect comes in with shared amenities like a big lounge, “social kitchen”, BBQ pits and laundry area.

Login Apartment has a cute name, but beyond that, I don’t think it can hold a candle to the bigger operations like Hmlet and Cove. For a start, it doesn’t have an online booking platform; instead, you have to fill in a webform and wait for someone to call you.

There are only 4 properties as well, in Orchard, Novena, Queenstown and East Coast. The East Coast one is surprisingly “affordable” at $1,200/month for a common room. 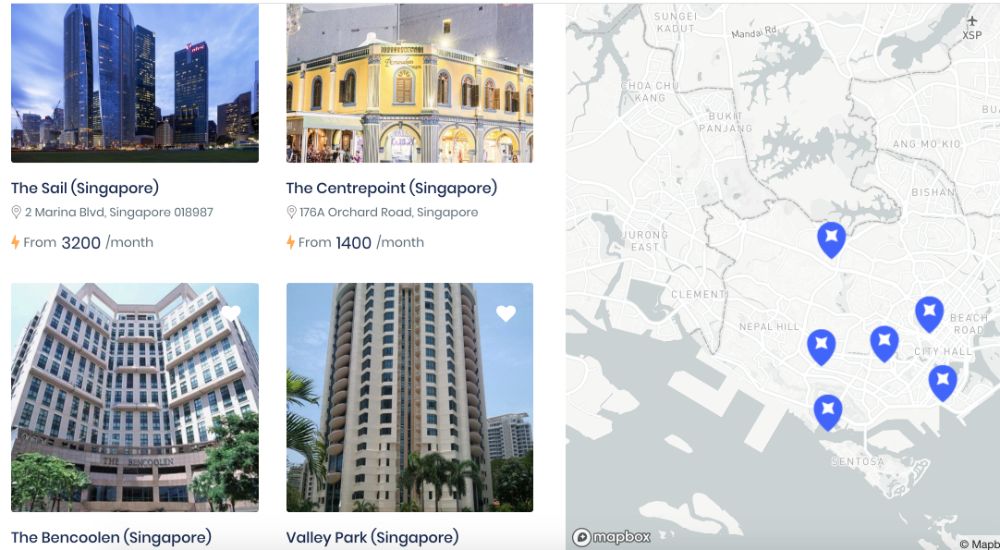 Another not-so-high-tech company is CP Residences. It doesn’t seem as on-trend or on-the-ball as Hmlet or Cove, though there’s an okay database of 28 residences in Singapore.

Unlike some of the other startups on this list, CP Residences doesn’t really sell the aesthetics of each apartment. But you can find some decent deals on there. For example, there’s a room for rent at the Centrepoint for $1,400/month, which is affordable for Orchard Road. 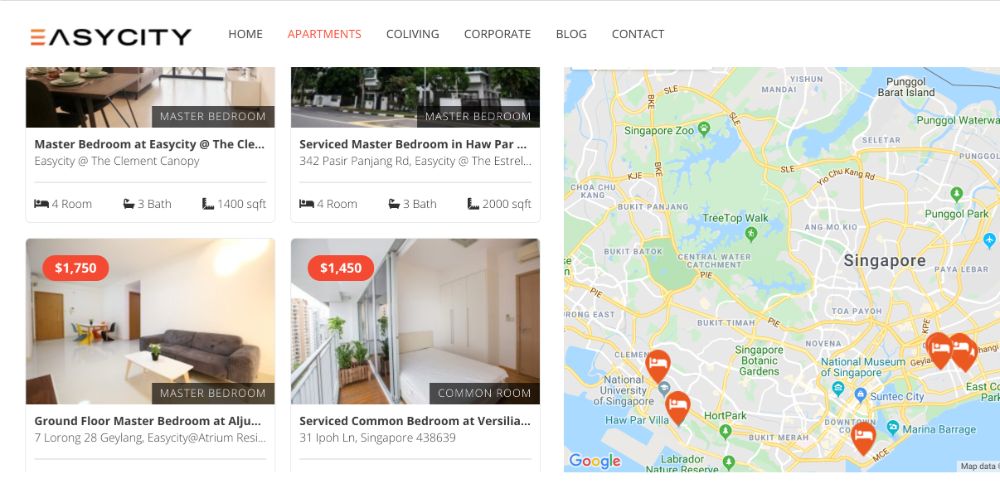 EasyCity is more like your typical property listing site rather than a co-living startup, but I suppose it’s technically co-living in that most of the rentals are for rooms within apartments.

There were only 16 rentals available when I checked, and the cheapest one was a $1,400/month common room in Aljunied. As with all the other co-living spaces, their rates include weekly cleaning, utilities and internet.

You might have seen the new Lyf Funan, which looks like a hotel but is marketed as a sort of co-living space at the same time.

Their rates are some of the most expensive around because it’s actually more on par with that of your typical hotel. They do have some larger rooms that can be shared; the cheapest sharing rate I found was $1,485/month per person, assuming you split the room among 4 pax.

It’s probably way too expensive to actually live here, but if you’re staying in Singapore for less than 3 months, you can’t rent, so Lyf’s weekly rates might be worth checking out.

The hotel has a bunch of communal spaces, like a lounge, social kitchen and a laundromat… But the decor is quite juvenile and loud — I just hope the residents aren’t.

What sets Figment apart from the rest is that you get to live in a preserved shophouse with beautifully designed interiors that would make many an influencer’s heart swoon.

No shophouse, room or suite are alike as each is designed to have its own individual identity by local design studios. Much thought has been put into everything that goes in the house from the furniture and furnishings to a coffee pod holder crafted using angsana wood, have been carefully curated.

Figment’s shophouses are located in residential neighbourhoods, many of which are heritage areas, such as Joo Chiat, Little India, Balestier and Geylang, so you have all the amenities and F&B outlets nearby.

While they have rooms available for below $2,000/month, its suites can go up to more than $4,000/month. But I guess you’re paying for an aesthetic that looks as chic as a hotel room, but more homey than one.

A rival of Hmlet is Commontown, another co-living startup with a very similar aesthetic. Commontown is much smaller in scale and has homes in just 7 properties currently, so the selection isn’t huge. The cheapest one I found was a $1,600/month common room at Tiong Bahru.

As part of the package, Commontown also organises “community events” where you can meet people. This sounds like an absolute nightmare to me, but it’s probably a plus for extroverts.

Is co-living in Singapore worth the $$$?

So far, the rental rates on these co-living platforms are on par with or even cheaper than renting traditionally.

I did a quick check on 99.co for room rentals in popular city fringe neighbourhoods like Tiong Bahru and Paya Lebar, and it seems that you’d have to pay at least $1,400 or $1,500 a month for a common room in a condo. That’s already higher than the rooms at some of these co-living places.

When renting the usual way, you’d also have to fork out a few hundred bucks for utilities, cleaning and furniture, whereas all these extra costs are included in the co-living rate.

I like that co-living leases are usually quite flexible. After the 3-month minimum stay (to meet Singapore’s legal requirements) you can usually choose to extend your lease month by month. Some even allow you to book a room and move in the very next day.

It’s nice that the negotiations, administrative work and logistical hassle of moving are kept to a minimum. It’s even nicer that you can bypass toxic landlords and casually racist property agents entirely.

If I had to pick one negative thing, it would (ironically) be the overly social aspect of these places. I would seriously want to kill myself if I had to socialise with a bunch of self-congratulatory “digital nomads” who can’t stop comparing how many countries they’ve lived in so far.

Co-living spaces: Are they cool, or just a waste of money? Tell us what you think.

Cost of Living in Singapore (2022) — Is Your Salary Really Enough?

Would You Pay $1,000~ Per Month To Rent A Place Before Marriage? Illustrator Shares How She Did It

Should You Buy or Rent Your Next Home in Singapore?