The first time I heard of Ang Mo Supermarket was through my grandmother. She cheerfully told me that she goes to the one near her flat in Potong Pasir.

At the time, I thought by “ang mo” she meant “white”. I was tickled that there was a Cold Storage in a (then) opposition ward, and doubly tickled at the idea of my grandma, the most frugal person in Singapore, shopping there.

It wasn’t until much later that I realised Ang Mo Supermarket is as un-Cold Storage as it gets. It has some of the cheapest groceries in Singapore.

What (and where) is Ang Mo Supermarket?

Ang Mo Supermarket is actually a small heartland business (complete with handwritten labels!) that is still holding its own against Goliaths like NTUC FairPrice and Sheng Siong.

Well, I say “small” but the outlets are the size of a typical neighbourhood NTUC FairPrice. They pack a big variety of foodstuff in that small space, so aisles can be a squeeze. Don’t forget to peruse the outside which is also packed with unpackaged fresh veggies, dry noodles and snacks.

Ang Mo Supermarket doesn’t sell much fresh produce (wet market and supermarkets are better for that) or fancy stuff like cheese, but you can find pretty much everything you need for a traditional Asian, predominantly Chinese, pantry.

Here’s a list of Ang Mo Supermarket outlets in Singapore:

I visited the Bishan St 24 outlet to find out which groceries are cheaper there than NTUC FairPrice (purely on the basis of NTUC’s popularity and ubiquity). In cases where NTUC FairPrice did not stock the same item, I picked the cheapest option available. 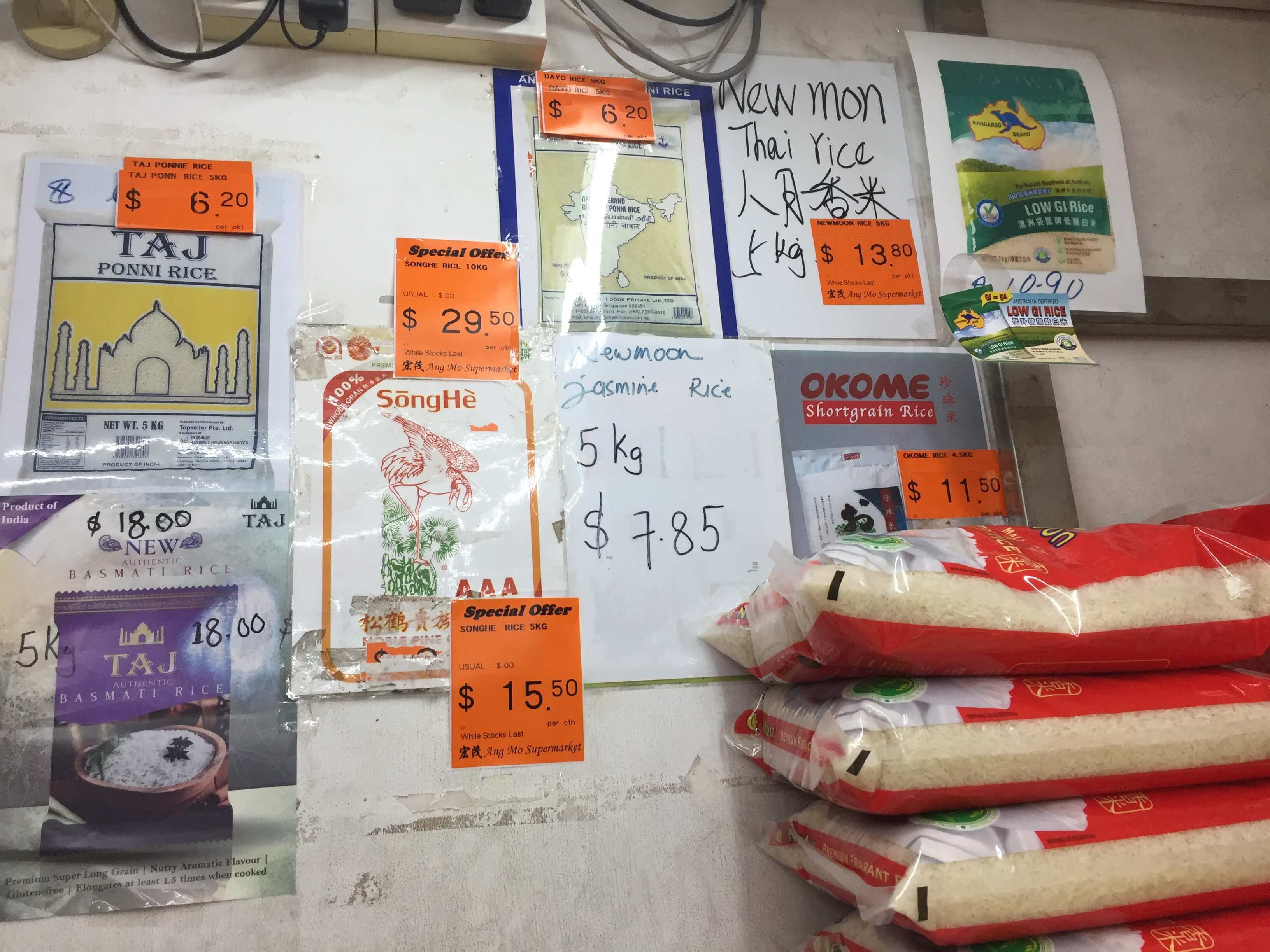 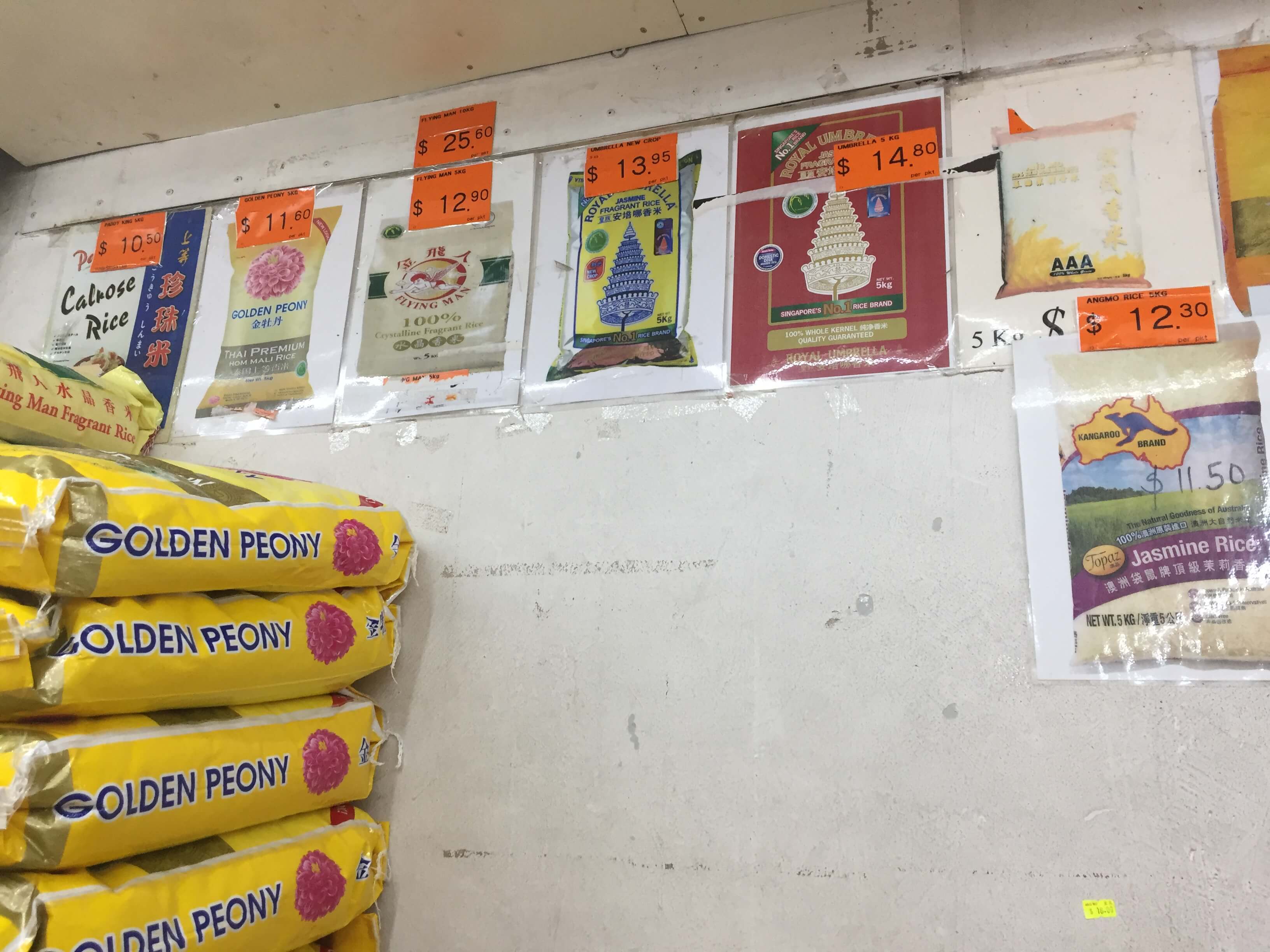 Ang Mo Supermarket stocks a variety of pantry staples like rice, noodles, tofu etc., either dry or chilled. Compared to standard supermarket prices, most items are 20 cents cheaper, but can be a lot more if there’s a promotion.

Not all items are competitive against NTUC FairPrice’s aggressive promo pricing though. It depends on the brand. For example, Naturel olive oil costs about the same price whereas Bertolli olive oil is a lot cheaper.

Here’s a snapshot of some staples I found that are cheaper than NTUC FairPrice: 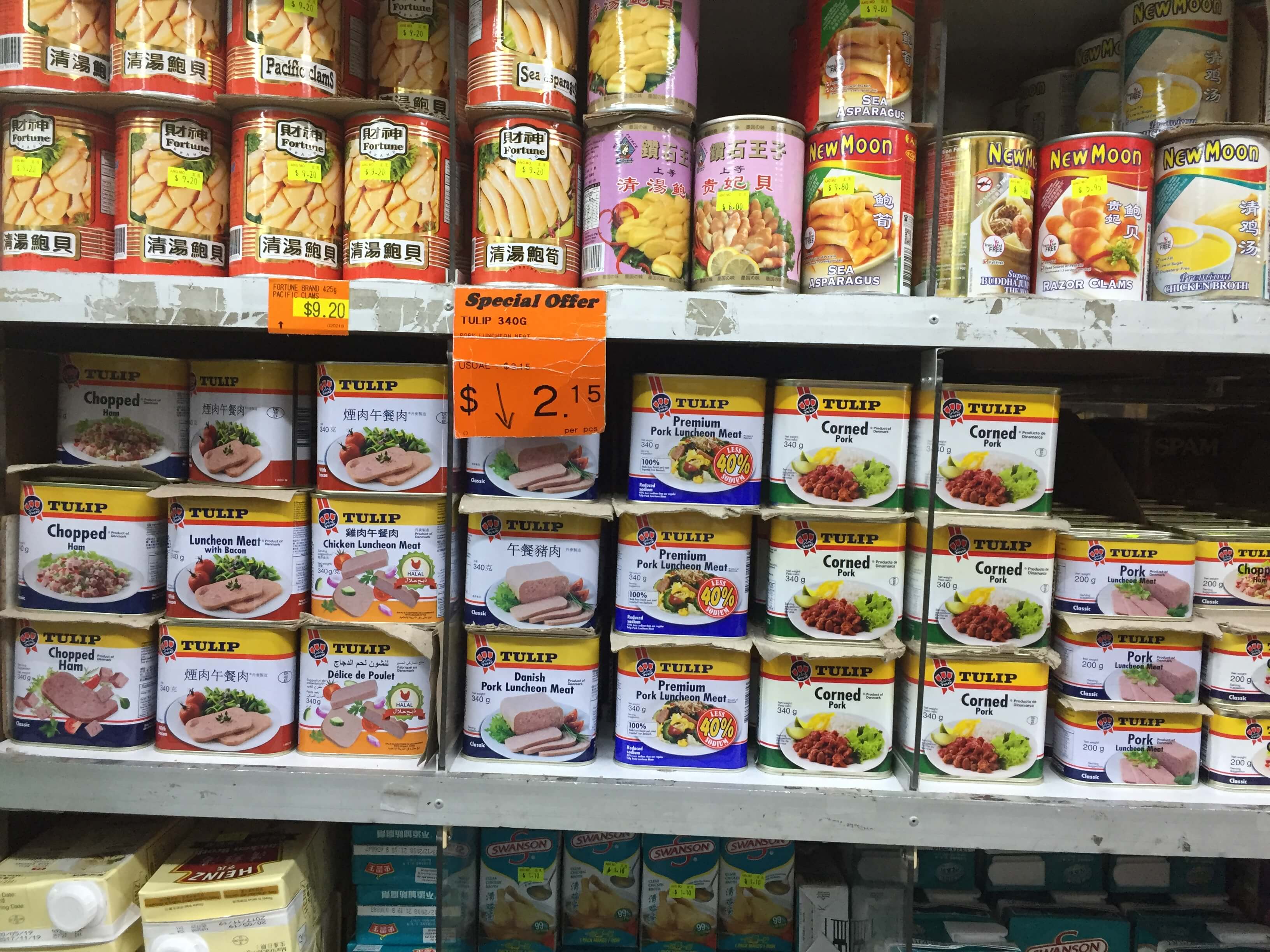 Loads of canned food at Ang Mo Supermarket to choose from, and as I discovered from my price comparison, this is one of the best type of groceries to buy from here.

Not only do they stock common household brands like Tulip, Ayam and Campbell’s at around 20 to 80 cents cheaper than NTUC, there are also a few hard-to-find items like tinned mackerel (so cheap!). Again, not all brands are cheaper than at supermarkets – like Heinz and Prego products – but choose the right items and you can save up to a very enticing 26%.

There are a few freezers’ worth of frozen items at Ang Mo Supermarket. Unlike, say, Cold Storage, there are very few convenience food items here such as pizzas, french fries or frozen meals. Instead, most of the items are frozen alternatives to fresh produce, with lots of seafood (prawns and fish fillets especially) and some meats and veggies.

If you’re on a budget, these frozen items can save you tons of money as they’re usually a lot cheaper than fresh. They’re also almost consistently more affordable than elsewhere. 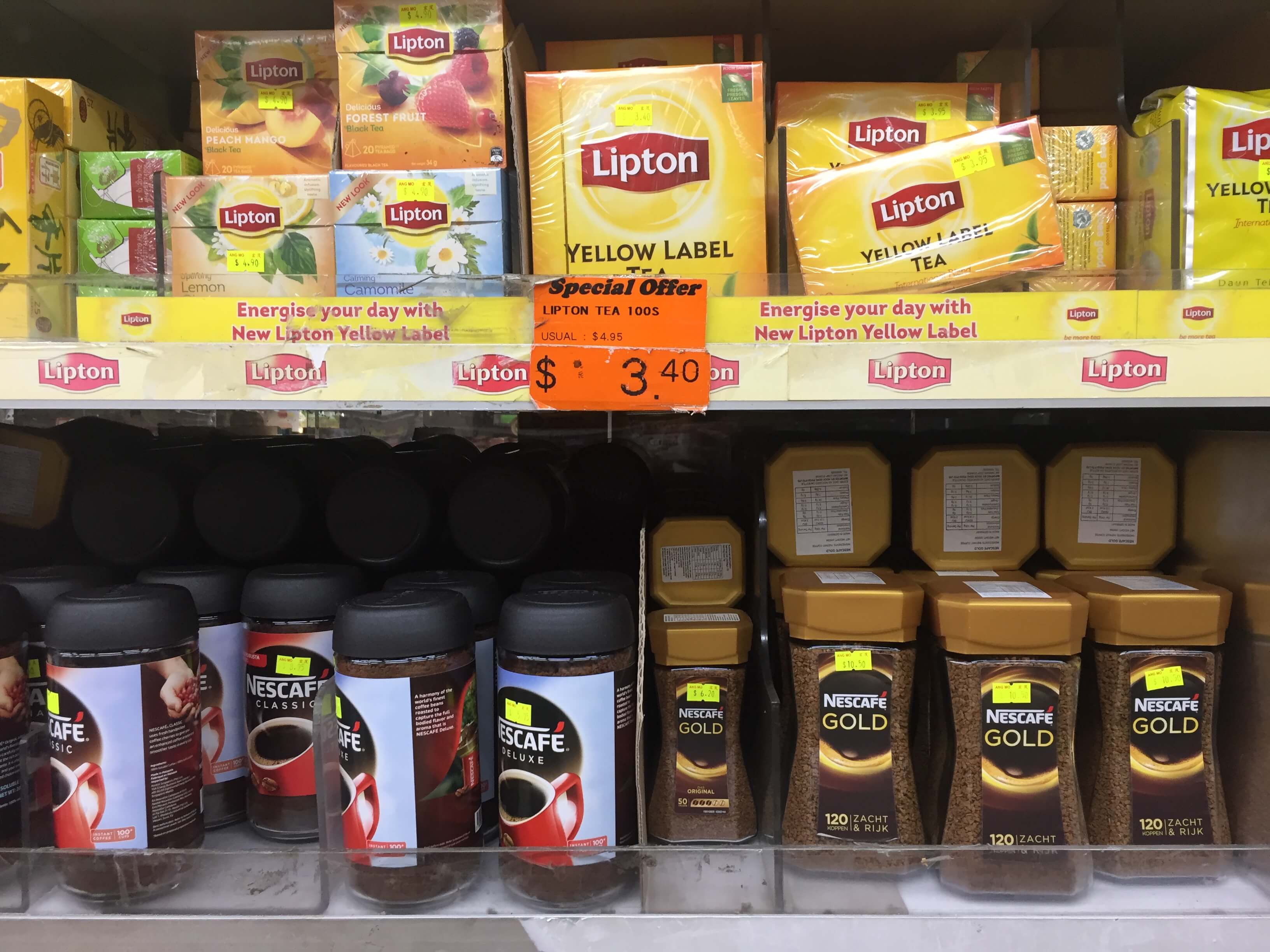 I’ve heard that milk and cereal are cheaper at Ang Mo Supermarket, but this didn’t turn out to be the case, perhaps because NTUC FairPrice is running some very good promotions at the moment. These items were priced about the same as at NTUC FairPrice.

But items with longer shelf lives like peanut butter, jam, tea and coffee turned out to be huge winners here. Look at that price difference between the peanut butters! (Full disclosure: My diet is 30% peanut butter.) And the tea and coffee are an absolute steal, though I suspect they might be closer to expiry than the items on FairPrice shelves.

Which groceries are cheapest at Ang Mo Supermarket?

Based on my price survey, these are the best types of items to buy at Ang Mo Supermarket. You can save up to 20% off your grocery bill with these!

Canned food: Soup, luncheon meat, tuna, mackerel, tomatoes – but not much variety for other veggies and beans.

Chilled items: Pre-packaged tofu and noodles – although the wet market is probably cheaper and fresher.

Soft drinks: Typically slightly cheaper than elsewhere but not by much. There are a couple of bargains on parallel imports, e.g. Coca Cola from Malaysia at $3 for 3 1.25L bottles.

Which Ang Mo Supermarket items should you skip?

I’d say Ang Mo Supermarket is great for long shelf-life foodstuff but it’s not as competitive for a few other products. That said, nothing here is overpriced – the overwhelming majority of these are the same price as NTUC. They just won’t yield the most savings.

Fresh fruit & veg: There’s a smallish selection outside Ang Mo Supermarket, but roundly ignored by all patrons. Better to buy produce from the wet market or your local fruit & veg grocer.

Milk and cereal: As mentioned, prices seemed roughly on par with NTUC due to aggressive promotions.

Junk food: There aren’t a lot cheap snacks to choose from. When it comes to junk food, you really cannot beat ValuDollar/ABC Bargain Centre anyway.

Toiletries: Not very much toiletries to choose from. Better to stock up on shampoo, soap and personal care items at these discount toiletries shops.

Household items: Apart from a couple of cheaper cleaning products (e.g. Magiclean at $3 a bottle) most of these are priced on par with NTUC. Consider buying from ValuDollar’s bigger outlets to save money.

Do you have a favourite heartland supermarket for cheap groceries? Share it with us in the comments!

This post is not sponsored by Ang Mo Supermarket. We were not paid to write about them. We had to pay for all our canned food.