As it is, it’s not easy to find cheap drinks in Singapore. What more at the fancy Holland Village, right? Wrong. The hip Bohemian enclave is one of the most popular places to chill in Singapore, so the competition amongst the Holland Village bars is delightfully stiff: you can get smashed for as cheap as $8 a pint – which by the way, is dirt cheap not just by HV standards, but by whole-of-Singapore standards.

If you set alarm and panggang right on the dot, you’ll probably be able to make it in time to order draft beers and stout at under $10 a pint. That said, although most of the bars’ promo prices end at 8pm and 9pm, there are several – like #WTF by IndoChine and The Fine Line – with all-day happy hours.

On the other end of the spectrum, you’ll find more established pubs like Wala Wala, Harry’s and Starker with higher prices ($12 to $18/pint).

To compile this epic price index, I literally went up to every bar in the stretch and said “Hi, I’m looking for the cheapest beer in Holland Village. What’s your best happy hour promotion?” Some bartenders were friendly and happy to help, some gave me dirty looks… and I even kena one who questioned if I was legal to drink (“Eh girl, are you still in school?).

So yeah, you’re welcome. I braved the paiseh for you so you don’t have to waste time asking and look cheapskate in front of your friends.

Disclaimer: I chose draft beers on tap because it’s hard to compare shooters and cocktails. Plus, most happy hour promotions are for beers anyway. 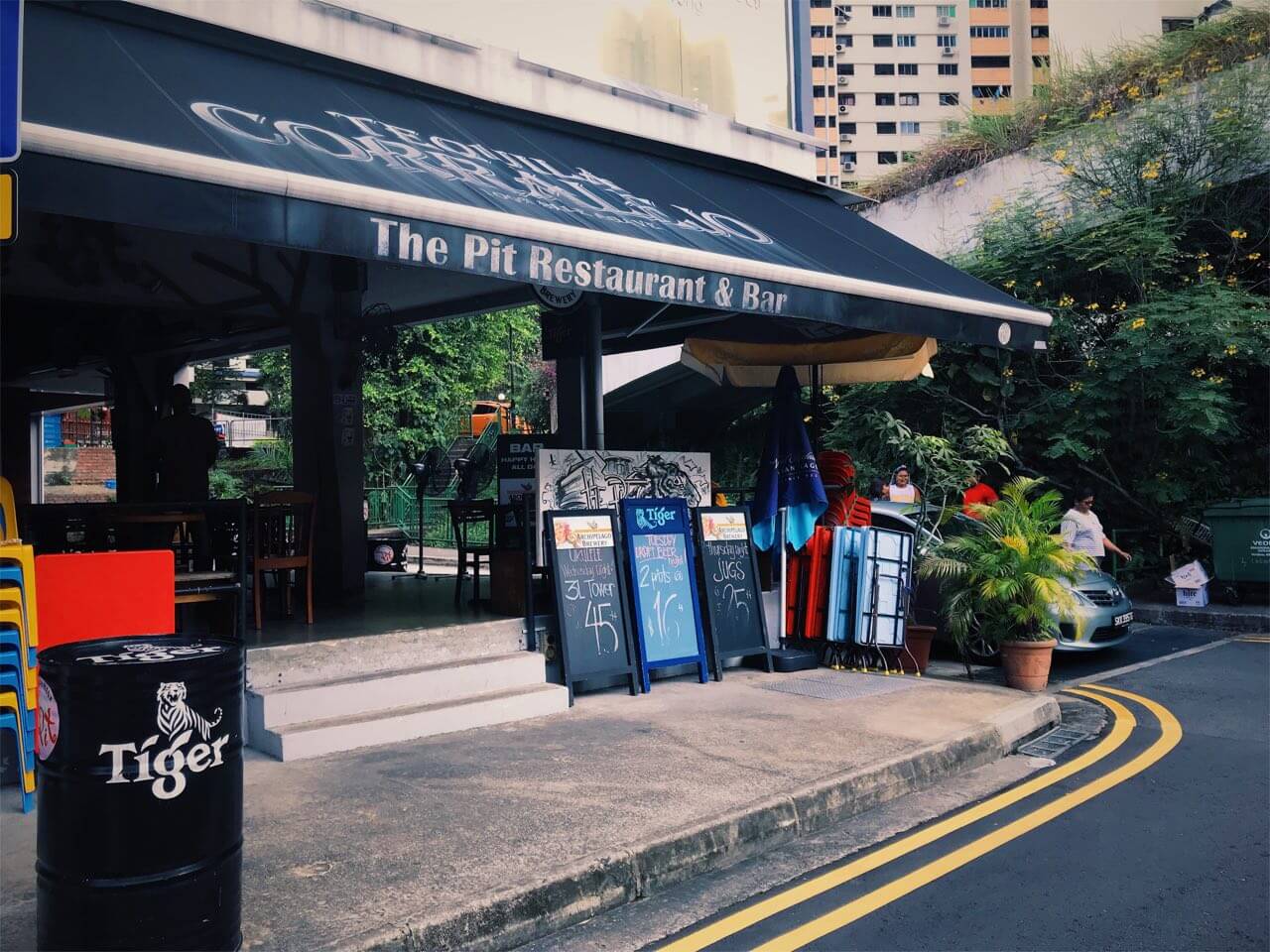 The Pit has the absolute cheapest price of $8/pint (2 for $16) on their draft beers, which include good ol’ Tiger, Guinness, and an Archipelago range (Belgian Wit, Summer IPA, Bohemian lager, Irish Ale and Brewers’ Reserve). However, this $8 price is only available on Tuesdays as part of their daily promotions.

However, even at regular price, The Pit is relatively affordable. Happy hour is all day every day, and each pint is $9.90. Spirits and liquor are $7, while shots are $6. 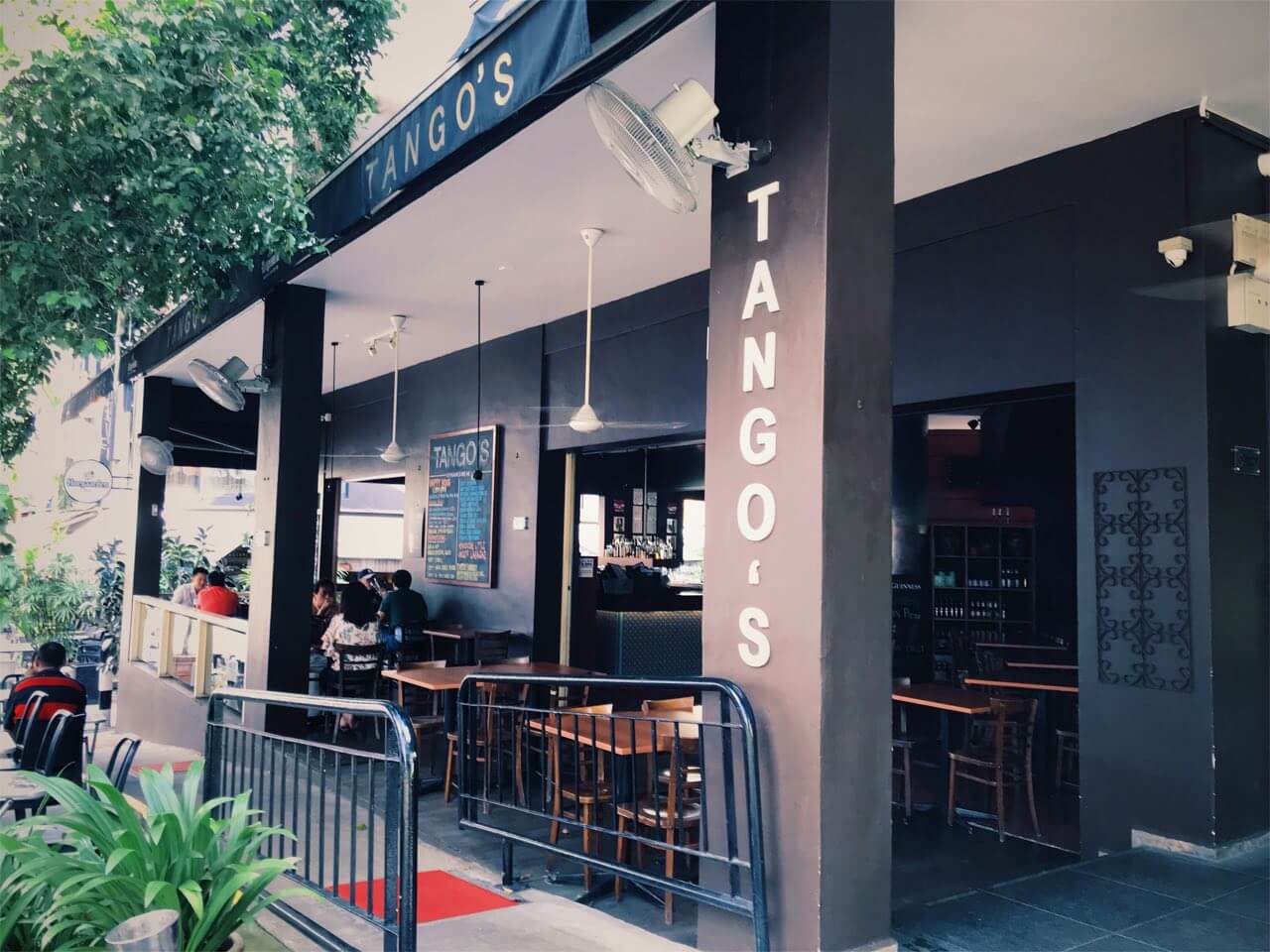 Matching The Pit’s price is Tango’s, but only for Heineken on draught, during happy hour (2 pints for $16). Asahi Super Dry, Hoegaarden and Guinness are 2 for $18. House wines are $10/glass.

Happy hour is 3pm to 9pm, and it’s 1-for-1 on all beers and house pour spirits. Spirits are 1-for-1 at $13, making it $6.50/glass, which is slightly cheaper than The Pit. 1-for-1 promos are great, but because it’s time-sensitive, you need to watch the clock. Order past 9pm and you’ll be paying over $20 (including taxes) for your beer. The chain is also known for Kanpai 789, which sells $40 towers at Robertson Walk. You can’t get that at Holland Village, but just so you know. 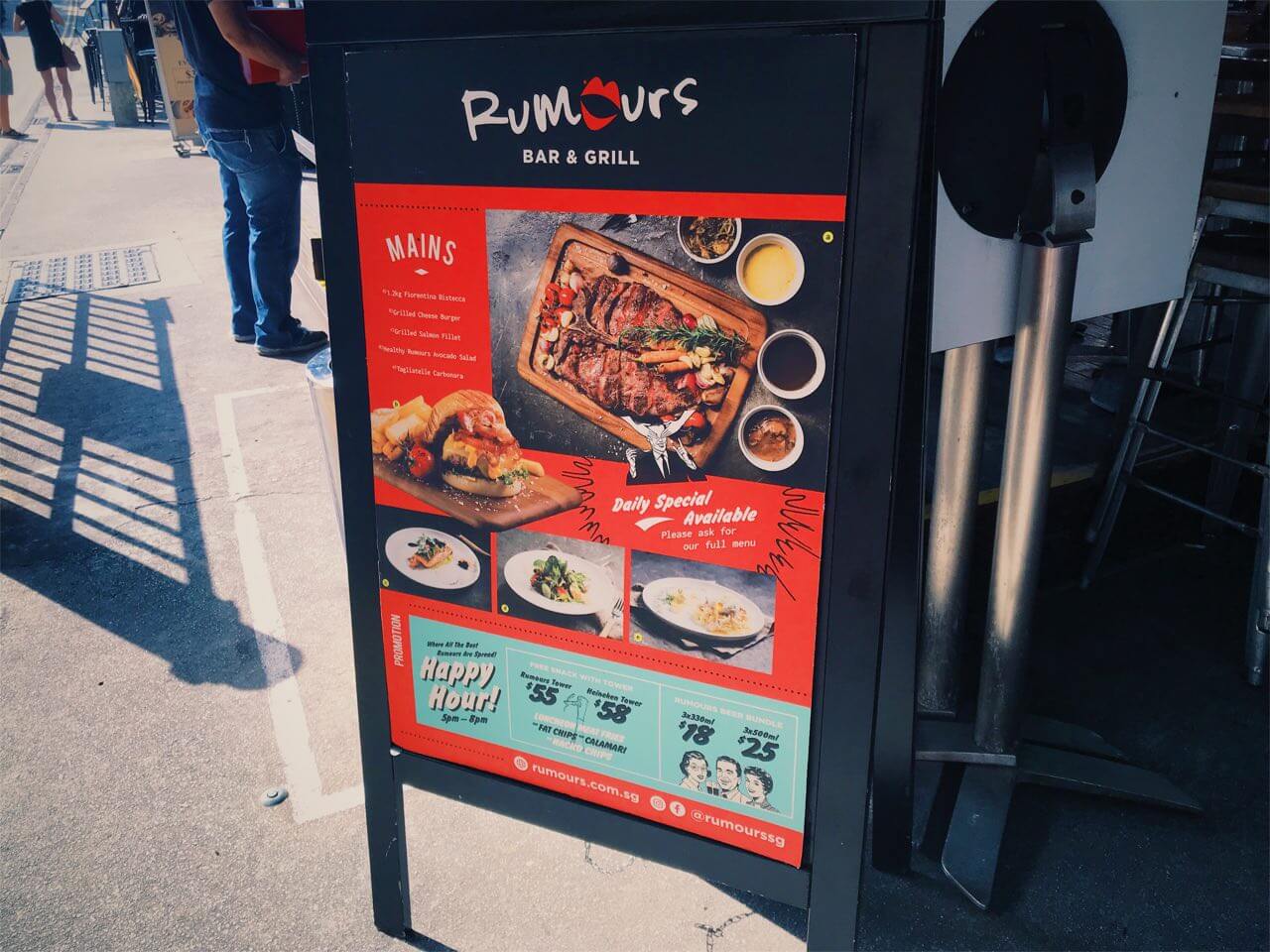 If you aren’t fussy with your poison, Rumours beer go at 3 pints for $25 from 5pm to 8pm daily.

If you have a bigger group, you can opt for the 3L tower for just $55 ($58 if you want Heineken). With each tower, you get a free side of either luncheon meat fries, calamari, nacho chips or just fat chips.

Make sure you watch out for the time though. If you miss happy hour, don’t bother ordering by the pint – the regular prices range from $15.80 to $23 (ouch!). Instead, go for the alcohol buffet. At $35 per pax, you can have your fill of beer, wine, liquor shots, cocktails and even non-alcoholic mocktails and sodas. 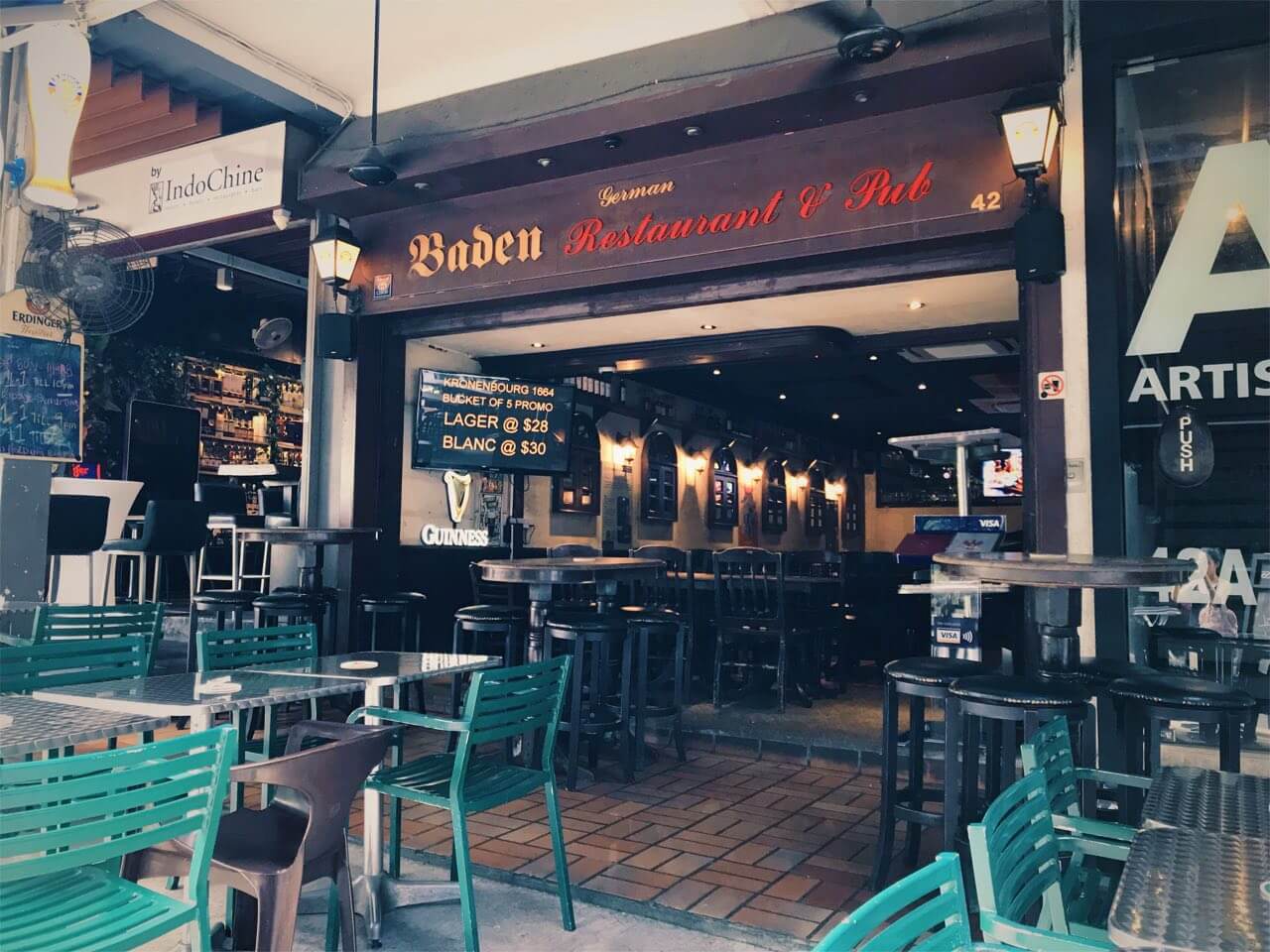 Baden’s 1-for-1 happy hour promotion completely excludes the most popular drinking days of the week – Friday and Saturday. To make up for it (or not), the hours are slightly longer, and last until 10pm from Sunday to Thursday. 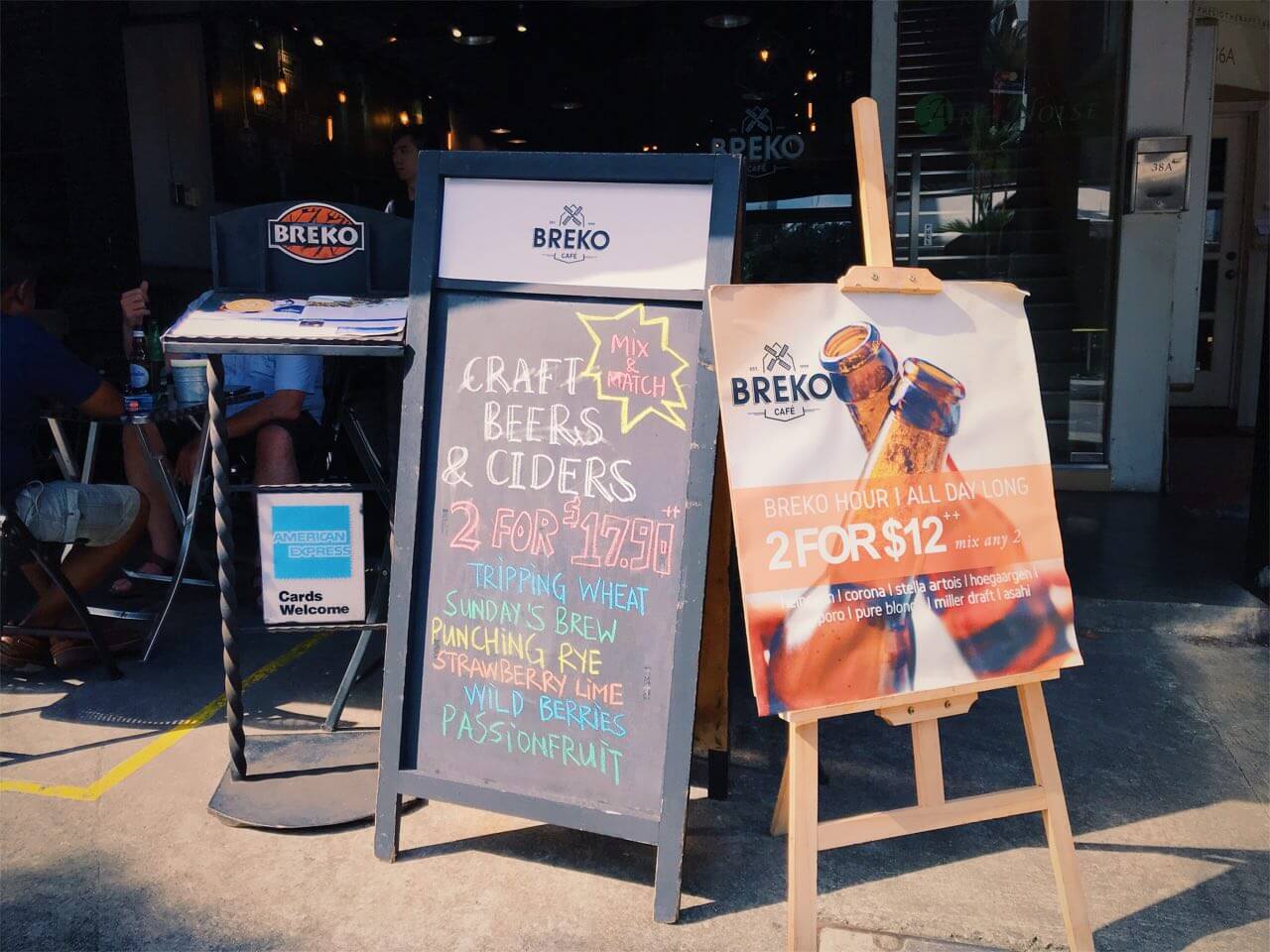 Breko is a multi-hyphenate hideout; it’s bar, restaurant and cafe, all rolled into one. But because it’s not solely a booze business, they don’t do cocktails and shooters – beer only.

Regular bottled beers (think your Heinekens and Coronas) are 2 for $12, while ciders and craft beers are 2 for $17.90. Located right smacked in the middle of Holland V is Windmill Cafe & Bar. Their happy hour promotions are reasonably affordable, but the complicated pricing system is slightly annoying.

Personally, I wouldn’t want to have to keep track of what time I order my booze and how much it’s going to cost. The mid-tier prices (9pm to 11pm) aren’t exactly the lowest, so if you miss the 9pm mark, don’t bother. At $12/pint, you’re better off at say, Breko, The Pit or #WTF by IndoChine where even the non-promo prices are cheaper. 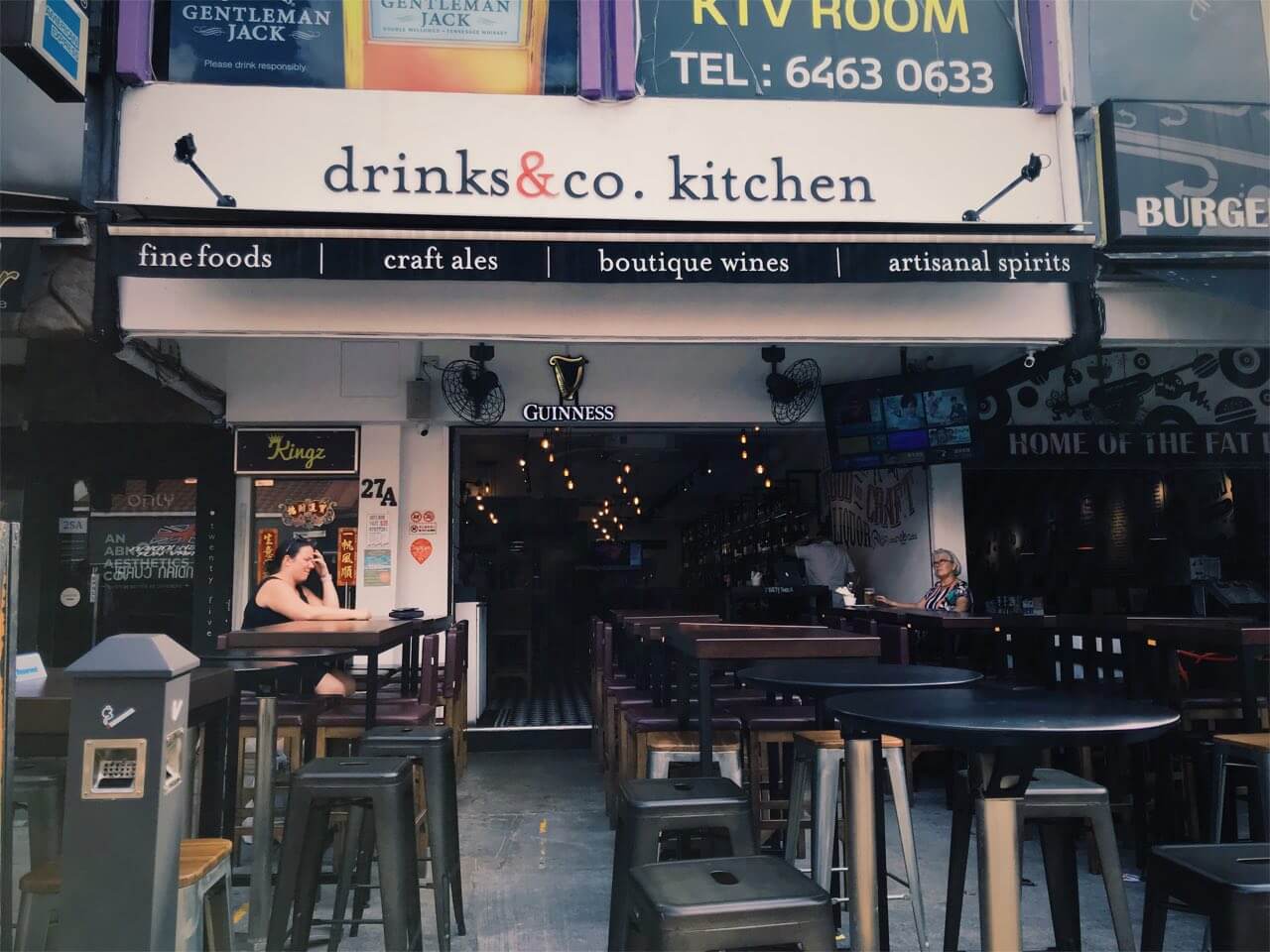 Drinks & Co serves Heverlee Belgian beer on draught at $9/pint, which is not a bad deal. However, happy hour is only from 3pm to 7pm. Anytime after and it’s $13.

Realistically, even if you knock off at 6pm, 7pm is a little early for happy hour to end lah. If you’re lucky you might get one drink in, but that’s probably about it.

Most people come here for their bottled craft beers ($14 to $16; $11 to $12 during happy hour). Drinks & Co has a unique concept where their drinks are on the shelves where diners can “shop” for whatever they want. 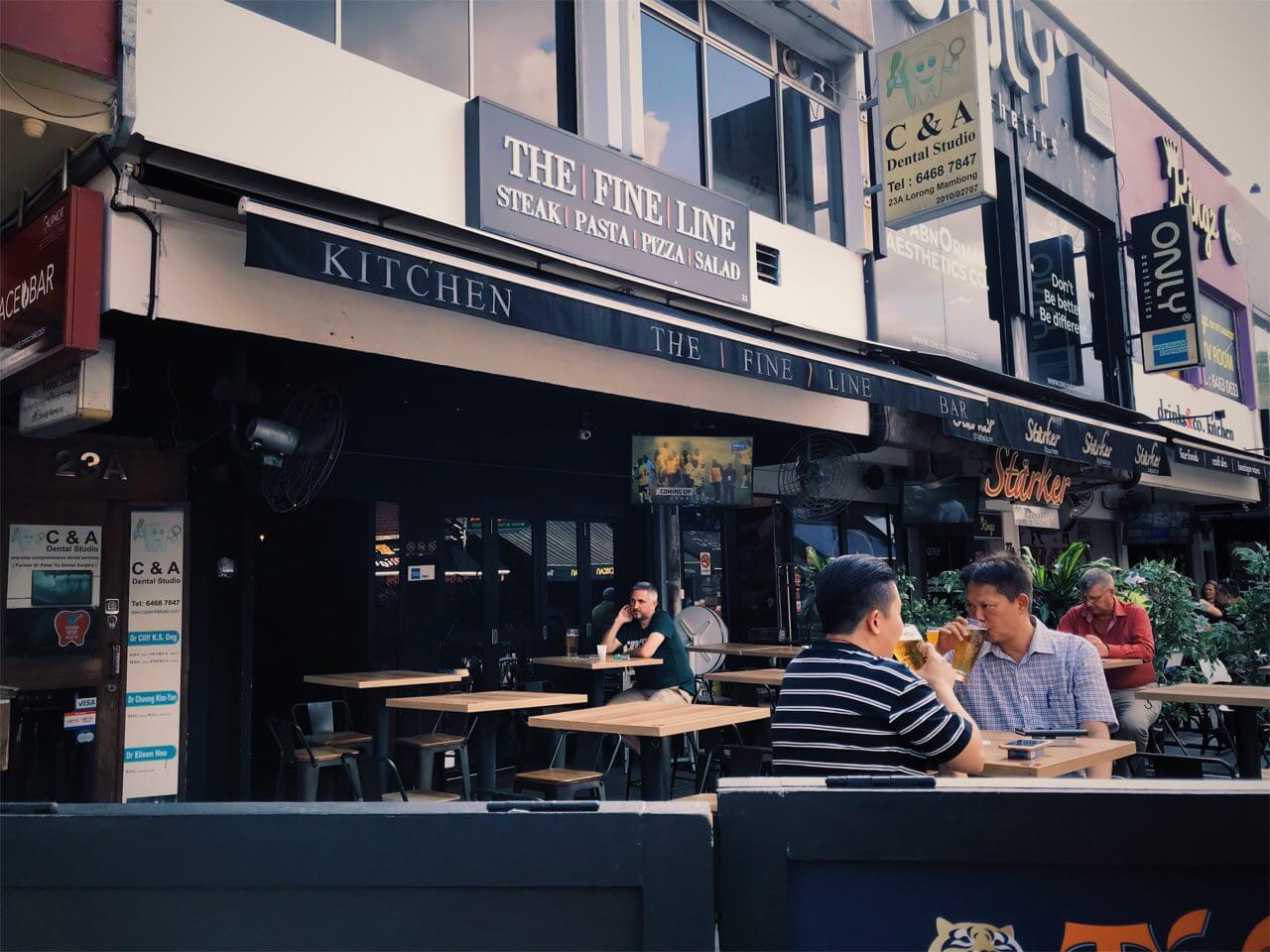 #WTF is a great place if you’re drinking with a diverse group of friends. Everything on the menu is 1-for-1 (all day), so you don’t have to pair up and “match” your drinks anymore. 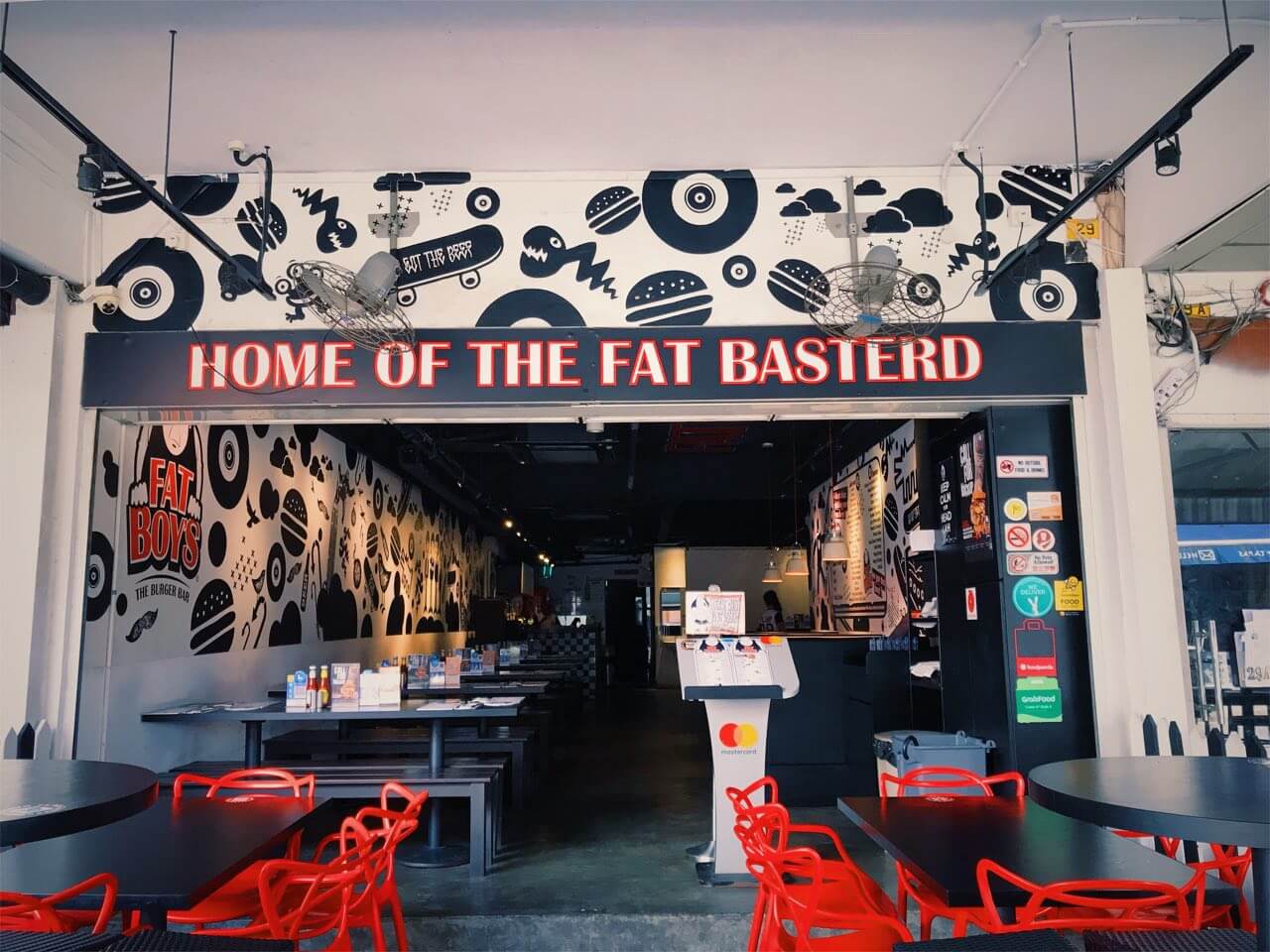 Although primarily a burger joint, Fat Boys is a surprisingly cheap place to grab an icy cold beer. Hoegaarden and Stella Artois beers are $10/pint throughout the day, daily. 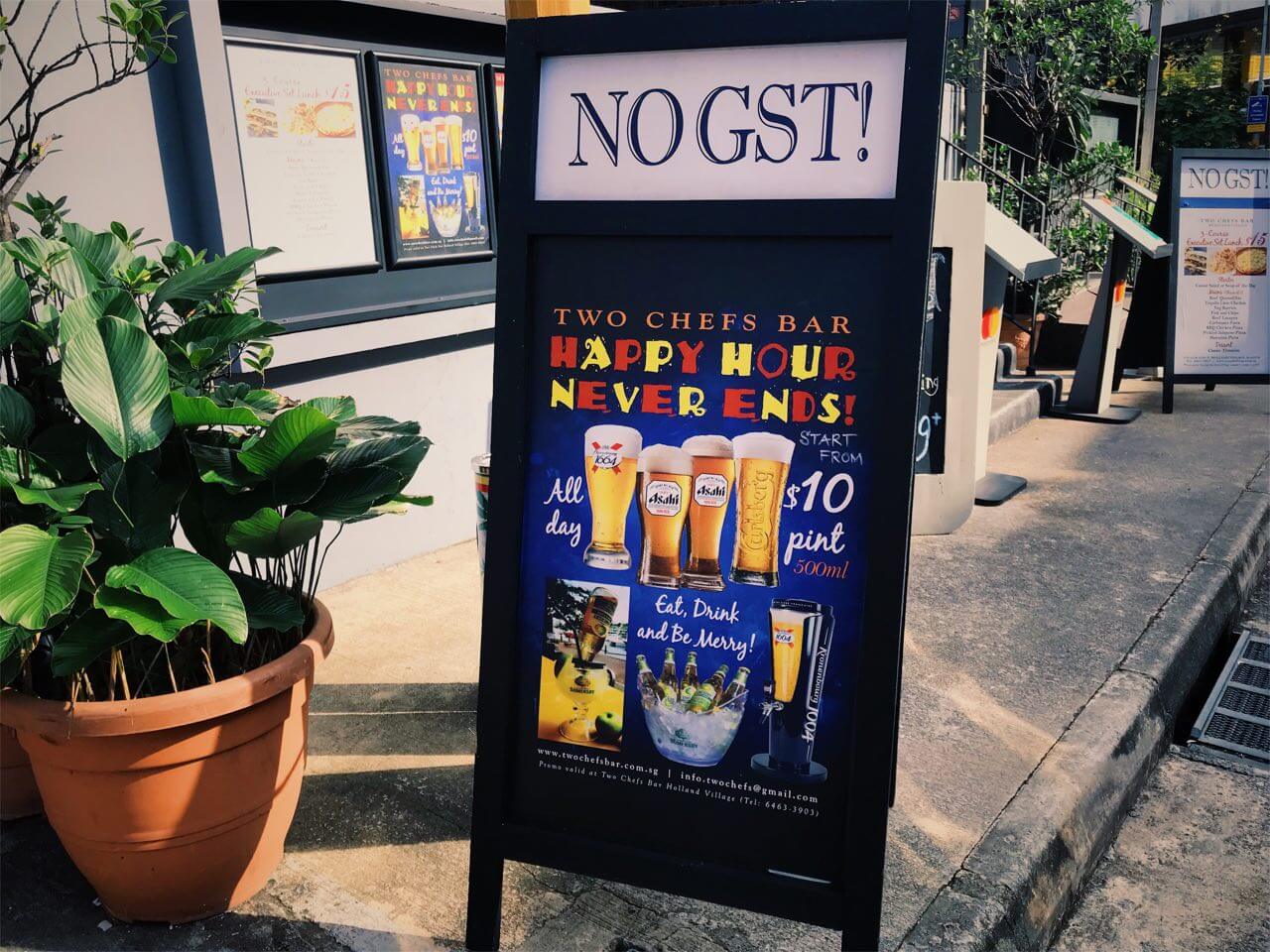 Not to be confused with the Commonwealth zi char, Two Chefs bar is a Mexican-Italian restaurant and bar. Most of the other establishments in this list charge GST and service charge – eh, the alcohol industry make a lot of money one okay – but not Two Chefs.

So when they say beers at $10/pint, they mean it. No hidden charges. I approve. 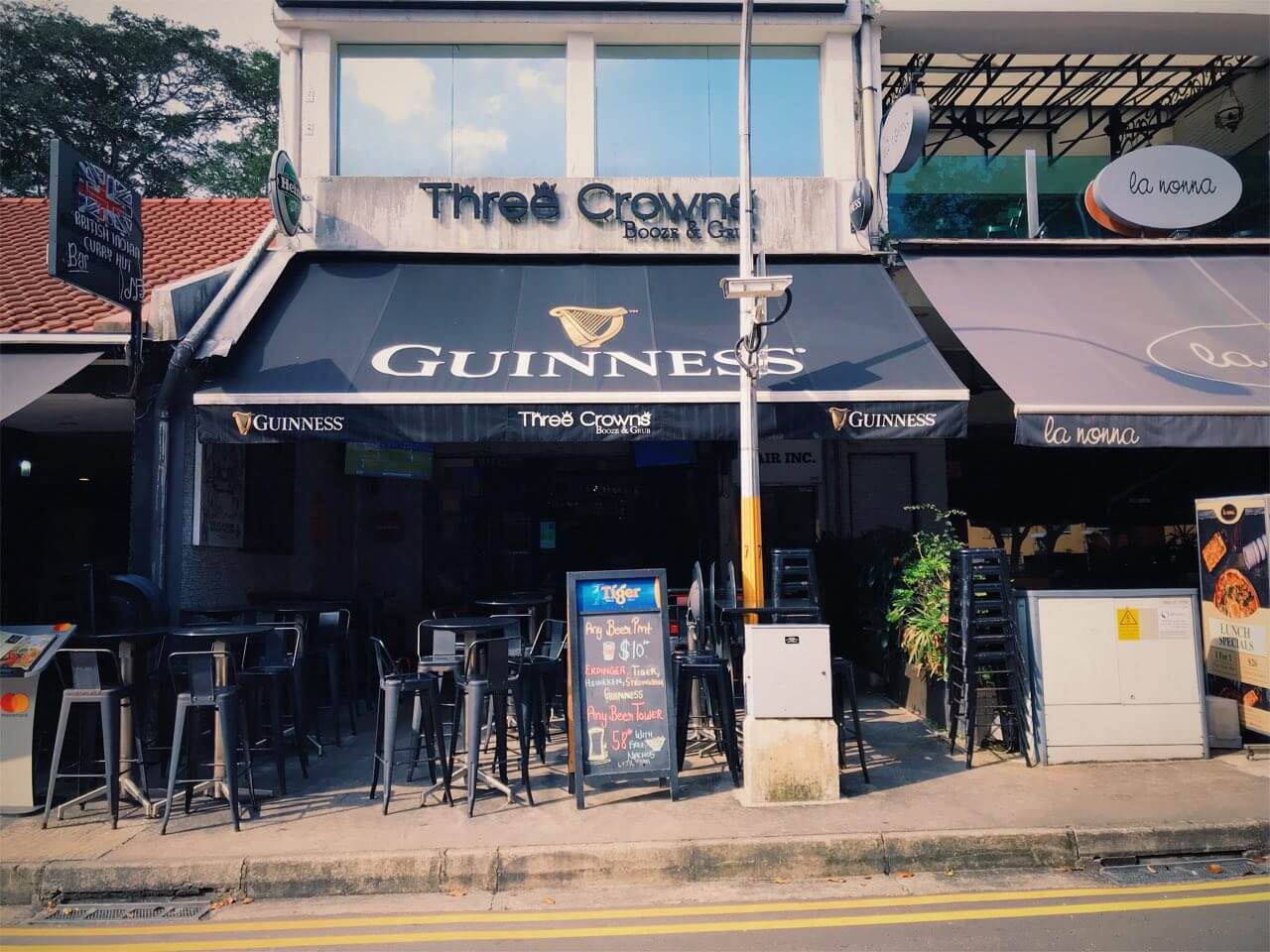 Three Crowns also sells draught beer for $30 for 3 pints, but only until 9pm. That comes up to $10/pint, but it sucks that you’re forced to order in weird multiples of 3.

They’re also a restaurant with burgers, pastas and the likes, and if you order any main before 9pm, you get a glass of wine on the house – woohoo!

But perhaps the best thing to order at Three Crowns is shots – most liquor and spirits go for just $5 a shot during happy hour, except tequila, sambuca, patron and jager, which are $8. 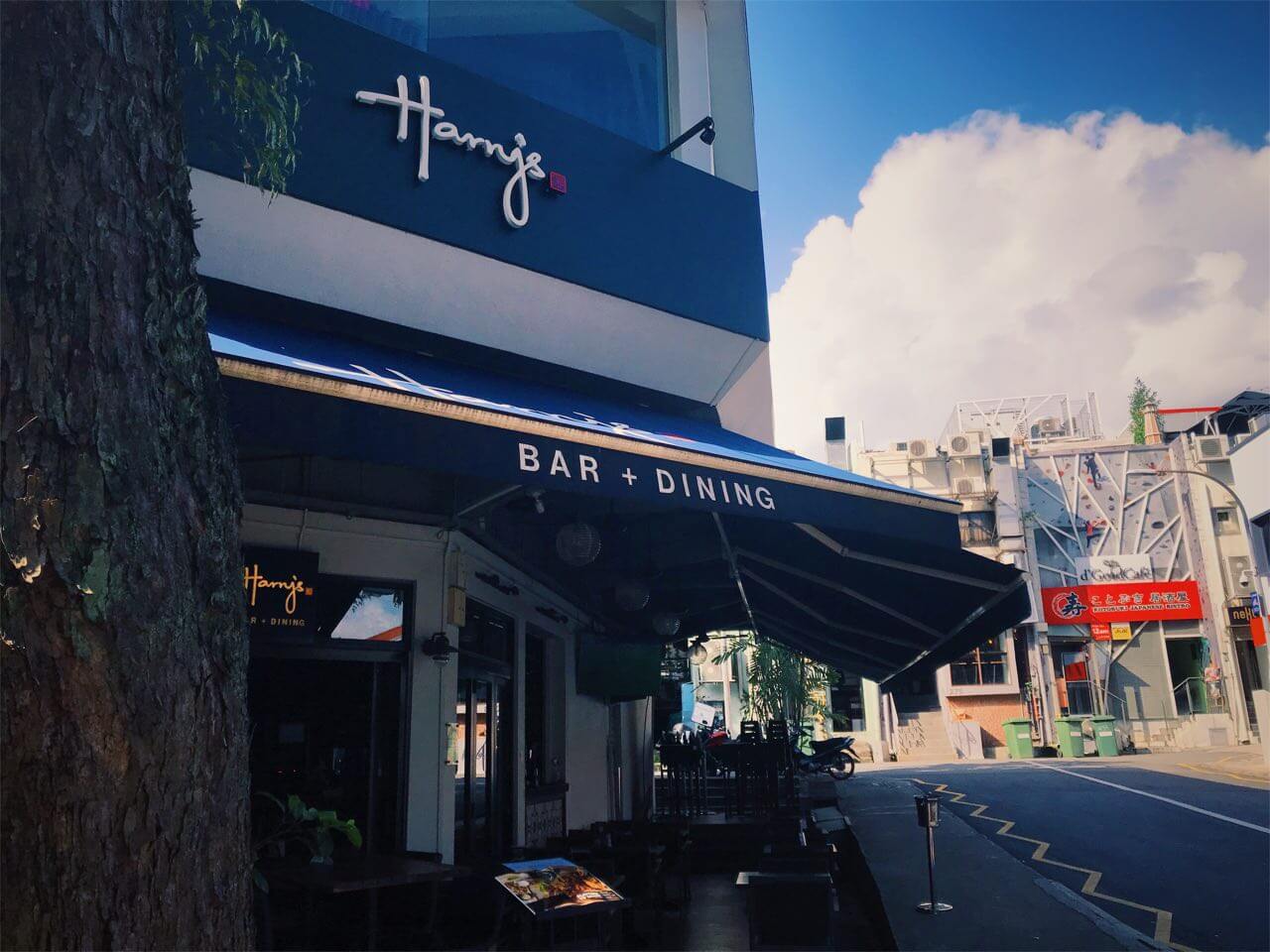 If you’re looking for a cheap place to drink, Harry’s is not it. At regular price, a pint of draught beer will cost you a whopping $12 to $16, which can buy you 2 elsewhere.

Happy hour makes things marginally more affordable, but only for selected booze. Carlsberg is the cheapest (2 pints for $22), followed by Asahi Super Dry and Kronenbourg Blanc (2 pints for $24).

There are no promotions for wines, cocktails and spirits ($12 to $18/glass). 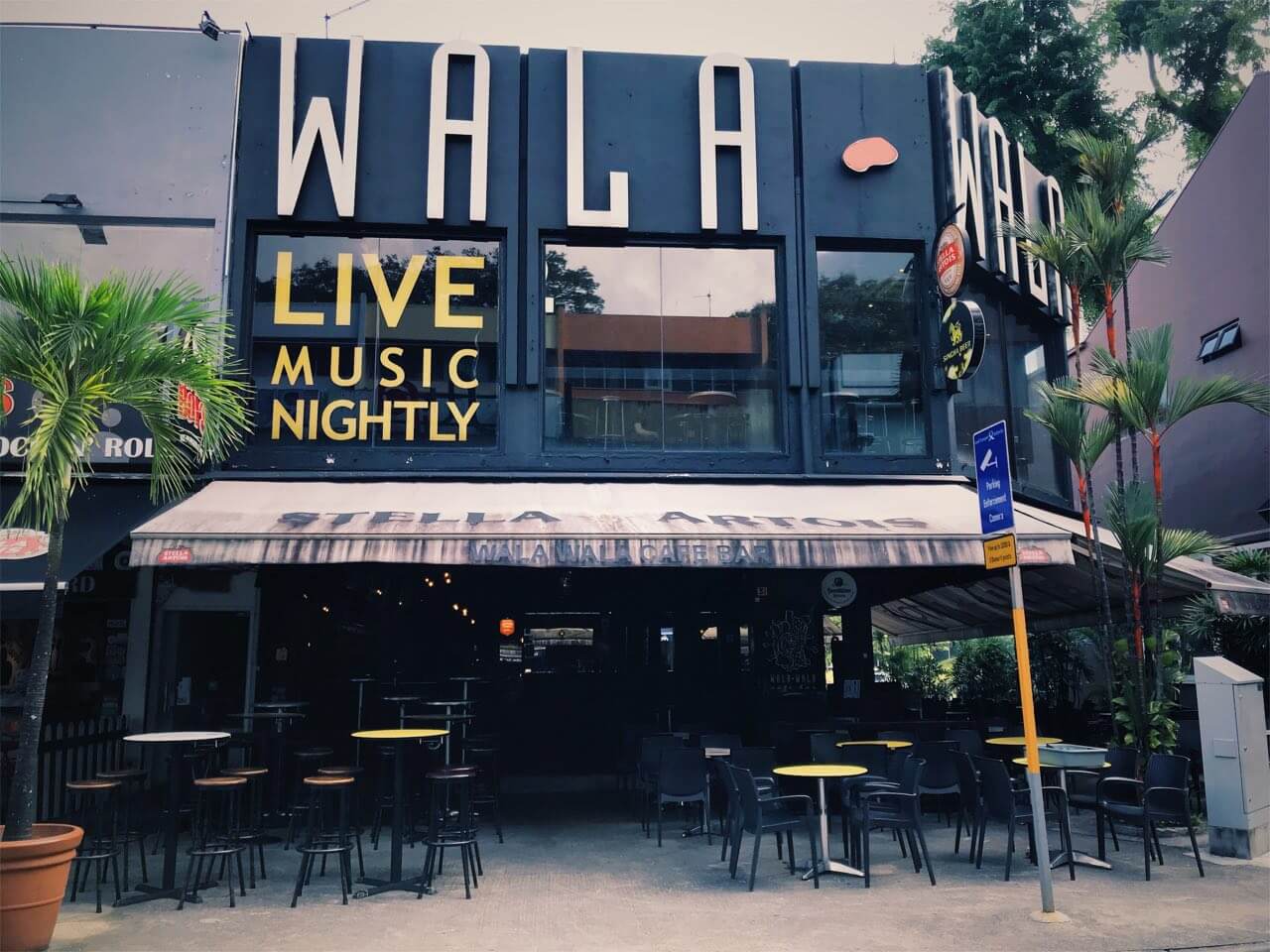 Most regulars head to Wala Wala for the ambience, because the bar hosts live bands nightly. If you don’t mind paying the premium for that, Wala Wala is a pretty chill place to kick back and end the week. 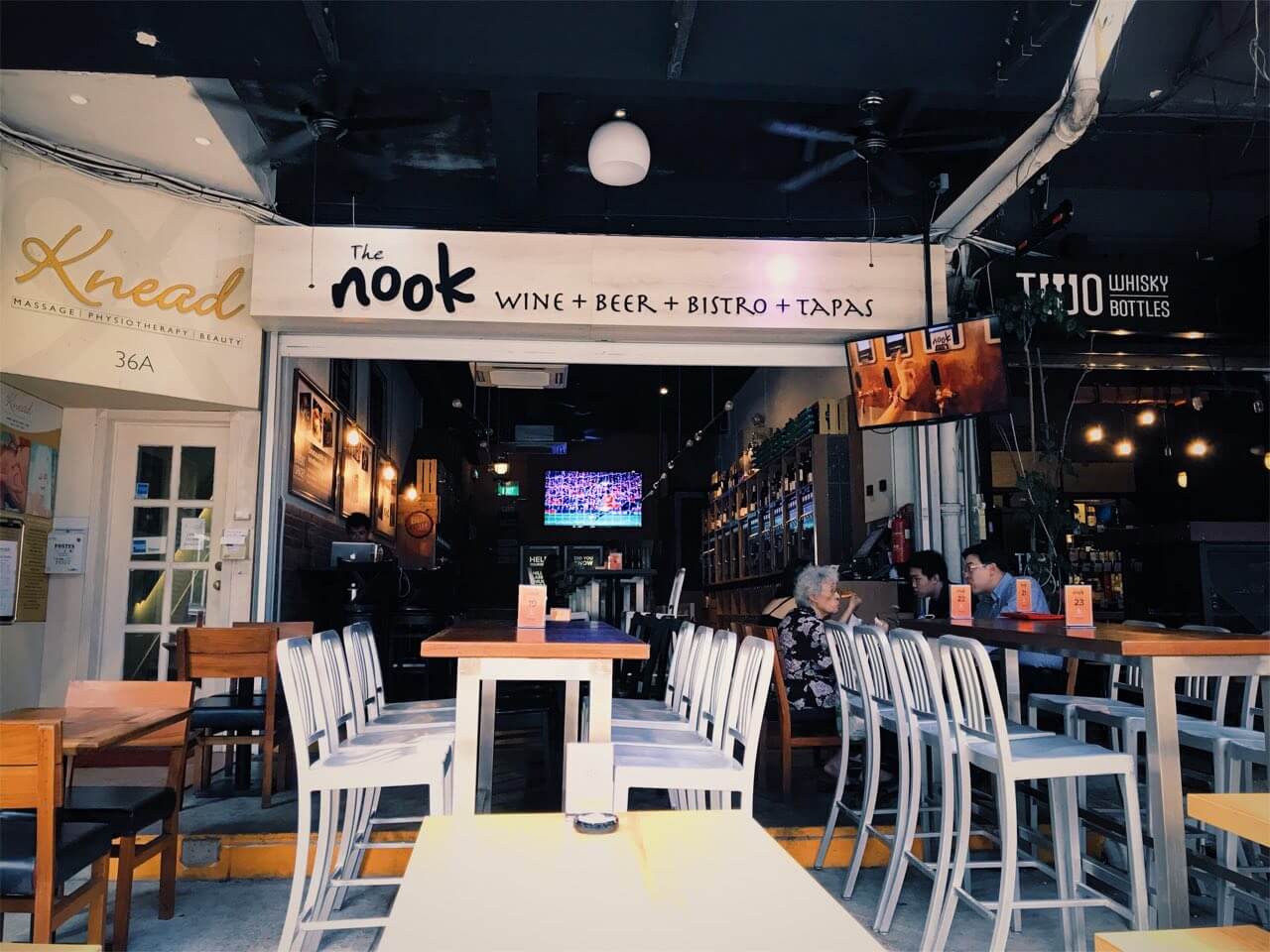 Like Rumours, The Nook offers a booze buffet, but for beer only. Pay $27 and you have an hour to load up on liquid courage and ask that chiobu out. Need more time (and balls)? It’s $42 for 2 hours.

If you’re not planning to go hard, you should skip Nook altogether. Pints are $13.90 each. Nook doesn’t charge GST, so all prices are nett.

Other restaurants in Holland Village with booze

Aside from the above-mentioned bars, there are also other cafes that serve beer. They may not have fancy cocktails and beers on tap, but they are likely to be less crowded.

Which is your favourite Holland Village bar to chill at? Share with us in the comments below!

Cheap Beer in Singapore – A Guide on Alcohol Delivery, Happy Hours and More