I’m at that stage in life when everyone around me is getting married and moving into new homes, and I can safely say that TV streaming services have officially taken over cable television.

But while it is the most popular, Netflix isn’t the only competitive paid TV streaming service available in Singapore. There’s also Disney Plus, which just launched, and other players like HBO Go, Viu and more

Here’s a helpful comparison of what’s available, for your viewing pleasure.

There’s a 30-day free trial for new users, so if the show you want to watch has been fully released, you can get the free trial and binge-watch it before your time’s up.

If you decide to continue with the service, the cheapest plan is $11.98 per month. But you can only use it on 1 screen at a time and it won’t be on HD.

You can also pool a few buddies together for Netflix Premium, which supports 4 devices concurrently, so you pay only $5 a month. However, Netflix appears to be cracking down on this practice.

The much-anticipated Disney Plus launched on 23 Feb 2021 to a great deal of fanfare, especially among stressed parents running out of kid entertainment ideas.

With shows like Star Wars spinoff The Mandalorian and Marvel TV series such as The Falcon and the Winter Soldier, Wandavision, and Loki, it’s got enough content to entertain probably everyone under the age of 40.

Each Disney+ subscription allows up to 4 concurrent streams (and plenty of parental control options, of course). There’s no free trial for Disney+ but we doubt that’s a dealbreaker for most.

If you’re super excited about Raya and the Last Dragon, you can also sign up for Disney+ Premier Access at $38.98 to watch it as many times as you want. Otherwise, the movie will be available to Disney+ subscribers only on 4 June.

Just bought a new iPhone, iPad or Mac? You can get a year’s worth of free entertainment with Apple TV+, Apple’s attempt to jump on the video streaming bandwagon.

If you don’t qualify for free Apple TV+, there’s a 7-day free trial, after which you can pay $6.98 a month to subscribe.

The shows aren’t terribly exciting, though. The biggest hits seem to be a Billie Eilish documentary and M. Night Shyamalan’s Servant TV series. It’s such a snoozefest that Apple TV+ even comes with a sleep timer — it’s like they expect you to fall asleep.

Given the film library, I probably wouldn’t sign up for Amazon Prime Video just for the shows. However, it’s okay if you already have an Amazon Prime subscription for your grocery shopping.

Apart from a few oldies but goodies like The Office and Parks and Recreation, the Amazon catalogue is a bit “cui” — largely old B-list movies (that are probably available on FMovies…).

HBO Go was the most well known for Game of Thrones, but now that winter is over and all 8 seasons have been concluded, what’s else? Well, there are a few other shows like Westworld, Birds of Prey, and the Crimes of Grindelwald

You can download the app and sign up for HBO Go directly via iTunes or the Google Play store. Pricing is a bit steep for a TV streaming service though.

If you’re into Korean shows, you would know about Viu. Viu is one of the most popular Korean drama viewing platforms because they have a free version.

You can watch popular dramas like Hotel De Luna, Doctor John and Shady Mom-in-law, and variety shows like Little Forest, Running Man and the Return of Superman.

Viu Premium is ad-free — yup, that’s hours of uninterrupted k-dramas for you. It also offers the current shows as soon as 8 hours after its original telecast, while the free one requires you wait at least 72 hours more.

Also, Premium streams in HD and is compatible with TV casting. For Viu Free, you can only watch on your phone, tablet or laptop, in 480p.

Last but not least, there’s MediaCorp’s meWATCH, formerly known as Toggle. Millennials probably think this is the lamest subscription of the list, but older folks who still watch local TV may appreciate it.

You can download meWATCH and watch MediaCorp dramas for free, obviously. But if you want, you can also top up and subscribe to specific types of shows. Here are the paid subscriptions available:

Since these TV streaming services are so popular, does it mean that the telcos are getting phased out? I thought so, but when researching, I realised that they too have some competitive packages aimed at the younger, more tech-savvy crowd.

If you want a good, generic mix of channels for sports, news, entertainment, K-dramas, etc, I think the Singtel TV Go plans are quite value for money. At just $6.90 or $9.90 per month, you get access to 160+ live and catch-up channels including HBO, Fox, KBS World and tvN.

StarHub Go‘s all-in-one plan is not as cheap ($29.80 monthly), but they have some good deals for the standalone channels. For instance, the StarHub Go Select isn’t too bad if you’re looking for Chinese TV shows and Korean dramas.

MoneySmart tip: 8% cash back on your streaming subscription with Maybank Family & Friends card

Most credit cards exclude recurring subscriptions from their benefits scheme, but there’s one card in particular that rewards you for spending on TV streaming subscriptions — the Maybank Family & Friends card.

With it, you can get a generous 8% cash back. Do note that you must fulfil the minimum spending requirement of $800 a month, and the cashback for that category is capped at $25.

Alternatively, you can consider a “bao ga liao” card that rewards you for all spending so you needn’t worry about too many T&Cs. Found this article useful? Share it with your fellow TV junkies. 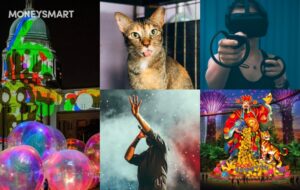