Young Singaporean parents or newlyweds giving out Chinese New Year (CNY) ang baos for the first time often have no clue about the market rates and red packet traditions.

Understandably, Chinese New Year can be quite daunting for first-timers. After all, there was a lot less to worry about when all you had to do was “greet” your elders and receive free money. But if you’re now an ang bao “giver”, then there are a ton of rules and customs to follow.

From auspicious numbers to the “ang bao hierarchy”, here’s a 101-guide on red packet etiquette for dummies.

Here’s how to get yourself prepared for the festivities:

What is the minimum amount to give?

This is the golden question on everyone’s mind. Let’s begin first by saying that most seniors will tell you it is not good practice to give odd number amounts like $5 or $7 as it’s considered inauspicious.

Amounts for ang baos should always be in pairs or even numbers, like $6 for instance. You might want to reconsider giving any amount lower than this.

The $4 amount is debatable because although it is an even number, the “4” in Chinese sounds like “death”, inferring bad luck. So tempting as it is to give $4 — which seems an affordable amount for people you don’t know that well — it may be better to avoid this in case others take offence. That said, this may sometimes depend on your dialect group; some say that Teochews do not see “4” as inauspicious.

There is no hard and fast rule for minimum amounts. For most, this depends on your unique financial situation and how much you feel you can afford.

Of course, there are rich folks giving out thousand-dollar ang baos, but for a better idea of how much regular Singaporeans give, we spoke to a few “seasoned” couples who have some years of ang bao-giving under their belts.

Something to note is that peers do not usually give ang baos to each other (or rather, it is uncommon and usually not expected of you). This means that if you meet unmarried ex-classmates at a CNY gathering, it would not be weird if you do not give them ang baos.

As for giving an ang bao to your spouse… isn’t it rather odd? But like we mentioned above, there’s no hard and fast rule on ang bao-giving. And if your spouse wants to give you an ang bao, just take lah.

Is there an age limit to receiving ang baos?

Although it seems age-related, it is more of correlation: giving or receiving ang baos does not depend on how old you are, but whether you are married or not.

That said, most of the unmarried people we surveyed believe that receiving ang baos in your late 30s becomes awkward and many will meet such kind gestures with “Wah, so old already – no need lah uncle/auntie!” or use their powers of distraction to change the topic or make a quick exit. Some draw the line even earlier, when the “kids” start earning a living on their own.

Ultimately, you should give ang baos based on your comfort level and according to your family practices. If you’re unsure, check with your parents or the elders in your extended family.

Should ang baos be opened in public?

While opening your presents in the presence of family members and loved ones (who are the gifters) is perfectly acceptable — and expected — on Christmas Day as an ang mo tradition, peeking inside your ang bao in front of the giver is a no-no in Chinese culture.

If you’ve kids, you will know that they tend to say and do the darnest things at the most unexpected moments that can embarrass you. So remind excitable little ones to say “thank you” after receiving ang bao, keep them away and only open them when they get home. 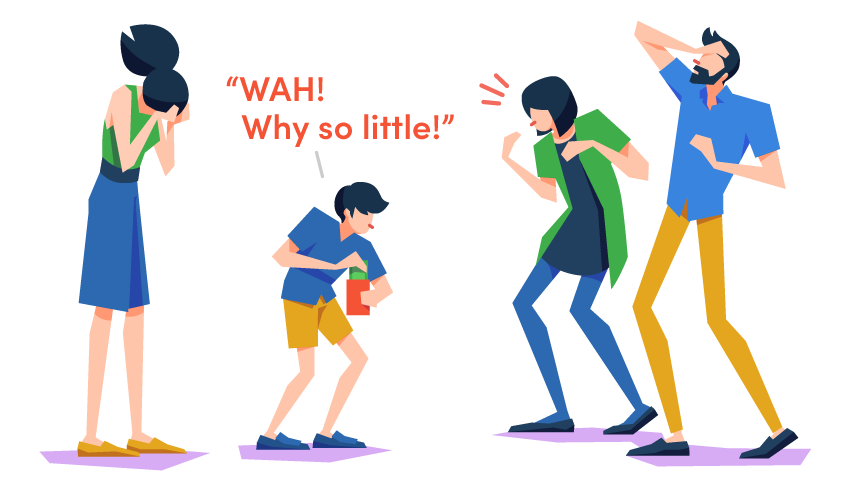 The trend seems to be towards giving ang baos that are from banks — prominent ones — in Singapore. This may sound flashy and materialistic, but hey we don’t make the rules, we just point them out.

Some even say that it’s not just the bank but also the account level that is meant to send out a signal to gawking relatives, i.e. giving out ang bao packets that make it abundantly clear that you are some high-level priority banking customer.

Honestly, we wouldn’t bother about these subtle “flexes” during your first few years of giving ang baos on Chinese New Year (or ever, actually). The easiest way to get ang bao “zua” (paper) is to drop by your nearest branch where you have an account and ask if you can get some. If you have a relationship manager, they would usually help out too.

Aside from banks, many retail brands also make and give out their own unique ang baos for customers. So you might also get some from your neighbourhood petrol station or supermarket.

If you don’t mind spending a couple of bucks for nicer sleeves, you can consider ordering customised ones from Taobao (you can do so via ezBuy too), Qoo10 and other online sites too.

With Omicron lurking around, you may not want to jostle in the queue for new notes. Guess what, you can actually pre-order new notes this CNY 2022. Here are the banks you can pre-order from:

Lazy to queue for hours outside your neighbourhood POSB branch? Aiyah, just use e-ang bao this year lah.

It’s convenient, fast and safe, what’s not to love about it? While e-Ang Baos do look and sound good theoretically, they actually haven’t caught on with the average Singaporean. However, “in China digital red packets are extremely popular,” Phil Pomford, General Manager for Global eCommerce, APAC, WorldPay from FIS points out. Apps like Wechat, Weibo, and Alipay are commonly used to exchange red packets.

Interested to try out e-Ang Baos? Check if your bank offers this service here:

Table: The Association of Banks in Singapore

Traditionalists, especially elderly folks, may frown on this potential trend though. After all, the act of giving ang baos symbolises good luck. Plus you won’t get the satisfaction of holding a pretty red packet with fresh, crisp notes within. But money is money. And it’s the thought that counts.

Share this article with someone in need of some ang bao tips.