Instead of stepping onto the weighing machine with trepidation every few weeks, it’s so much easier to track your fitness progress with a fitness or step tracker strapped to your wrist.

These days, there’s a whole host of fitness trackers that you can use to track your heart rate, sleeping patterns, how many steps you take per day and so on, all with a view to helping you improve your fitness.

Does the acronym HPB sound suspiciously like Singapore’s Health Promotion Board? Well, it is. No, your eyes are not deceiving you, you can get a free fitness tracker from the government if you participate in HPB’s National Steps Challenge.

In fact, HPB is already onto Season 5, so you’re pretty late to the game.

That’s not a bad thing though. The latest fitness tracker offered by HPB is the first to have a colour display, so lucky you! Participants who collected a tracker in the previous seasons are not allowed to collect a new one, unless it’s faulty.

Download the HPB Healthy 365 app to your smartphone, using the app to join the National Steps Challenge. Link the app to your fitness tracking device (a smartphone that can measure your steps will suffice if you don’t have a fitness tracker) and earn points based on how many steps you take per day. These points can then be exchanged for vouchers.

You can then collect a free HPB step tracker, which is a very basic fitness tracker that can also monitor your heart rate. You can queue up at National Steps Challenge roadshows or make an appointment to secure a HPB steps tracker before going down.

Do note that the HPB step tracker is only free to collect for members of the public 17 years old and above with a valid NRIC or FIN number.

Once again, Xiaomi astounds by selling good-looking electronics at crazy low prices. The Xiaomi Mi Band 4 is no different.

It’s a waterproof, lightweight fitness tracker with basic features like step-tracking and heart rate measurement. The battery life is also great and it can stay charged for several days. Don’t expect more advanced features like GPS tracking, however.

If you’re looking for a basic fitness tracker at a low price, the Xiaomi Mi Band 4 is definitely one to consider for its low price. As there have been complaints that the heart rate tracker doesn’t work that well, it is recommended for those who aren’t hardcore athletes and mainly want to use a fitness tracker to become more active.

Fitbit Flex is another popular model, mainly because of its wallet-friendliness. It’s a basic, uncomplicated fitness tracker that is easy to use and also waterproof so you can wear it while swimming.

The Fitbit Flex is ultra lightweight so you won’t feel like you’re dragging a ball and chain around on your wrist. The battery life isn’t the best, but if you’re just looking for an uncomplicated, inexpensive fitness/step tracker to log your runs, walks and swims, it does the job well.

A post shared by Reverse Logistics USA (@reverselogisticsusa) on Nov 8, 2018 at 6:10am PST

Fitbit is to fitness trackers what Google is to search engines. There are several Fitbit models to choose from, but the Fitbit Charge 3 is one of the latest and popular ones thanks to the wealth of fitness features it’s got.

Other than the usual daily step count and heart rate, Fitbit Charge 2 can track your performance in a number of sports, including walking, cycling and weight-lifting. It’s also a step-up from the Charge 2 as it is water resistant to 50 meters.

It can also help in interval training by indicating when to begin and end a particular exercise. Finally, by reading your heartbeat, the Fitbit Charge 2 can also measure your heart health.

The Garmin Forerunner 235 is a solid fitness tracker that’s packed with features, and compared to some of the other models out there, it’s not even that expensive (everything is relative though).

With a nice round colour screen, it’s definitely one of the better looking fitness/ step trackers out there. It can track your heart rate 24/7, which is great if you need to monitor your health. It can also track running, indoor running and cycling. And thanks to GPS, it can monitor distance and speed as well.

The Samsung Gear S3 is undeniably one of the most handsome smartwatches out there. It is, however, on the large side, so take note if you have dainty wrists.

It is basically Samsung’s answer to the Apple Watch, and is quite feature-rich, with heart rate monitoring, activity tracking, GPS and an altimeter. You can also sync it with your smartphone, although you should be prepared to download a bunch of Samsung apps if you want to do that.

The VivoSmart HR is one of Garmin’s more basic models, but it has a decent number of options.

Users like it for its ability to switch between analog and digital displays, which means it can look good both in a professional setting and during a workout.

While it lacks super advanced features, it has a solid selection of the basic functions, including heart rate monitoring, distance travelled, calories burned, steps taken and so on.

One flaw is the lack of a GPS, but if you’re just using the watch to monitor your fitness it’s not essential. If you really need the GPS feature though, you can go for the Forerunner series.

Fitbit Versa 2 is a smartwatch-fitness tracker hybrid that not only looks snappy on wrists in an Apple Watch kind of way, but also has some basic fitness tracking capabilities. It was also the first Fitbit product to receive a colour display.

The Fitbit Versa 2 can monitor your quality of sleep by tracking deep and REM sleep cycles. You can also get personalised reminders to nudge you to stay hydrated, sleep better, and so on.

From your watch, you can remotely control apps but it is not able to stream or work on its own per se.

Like most Apple products, expect to pay a premium for the features. If you’re okay with that, the Apple Watch is one of the best smart watches on the market with a battery life of a respectable 18 hours.

The Apple Watch also has fitness tracking capabilities, which include the ability to detect and record steps taken, calories burned and distance travelled.

It can also track workouts including running, walking and cycling. If you’ve got an iPhone, you can sync your Apple Watch with it to check your data, make calls and check WhatsApp messages.

But honestly, at this price point, you’re paying a premium for a smart watch, not just a fitness tracker.

The Garmin Forerunner 235 is about as complete a fitness tracker as a runner could ask for. The device can track your activity, measure your heart rate and also offer information on distance and speed thanks to its GPS function, all while looking great on your wrist.

The Fitbit Flex 2 is an affordable waterproof fitness tracker that can be used in the pool. It is able to automatically detect swimming and measure the number of laps you’ve done, which is enough for most casual swimmers. As an added bonus, your wrist won’t have to struggle under the weight of a heavy device since it’s super lightweight.

If you can pay a little more, you can opt for the Fitbit Charge 3.

What is your favourite fitness tracker? Share your recommendations in the comments!

GuavaPass vs KFit vs Classpass – Which Fitness Pass is the Most Worth It?

Fitness & Beauty
Singapore Marathons Go Virtual: 7 Virtual Runs That Are Worth the $$$

Fitness & Beauty
HPB x Fitbit’s Live Healthy SG: Is It Worth Signing Up for a “Free” Fitbit?

Career
Being A Personal Trainer in Singapore — Complete Guide to Costs, Courses and Certification 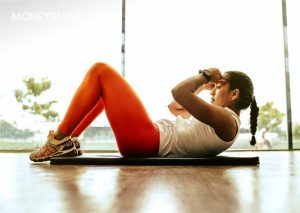 Fitness & Beauty
ClassPass Singapore — 6 Reasons Why It Is Value for Money
Sign up for our newsletter for financial tips, tricks and exclusive information that can be personalised to your preferences!