FIFA World Cup 2018 – Complete List of Places to Watch it for Free (Legally!) in Singapore

Ole, ole! The FIFA World Cup 2018 – only the world’s most anticipated soccer tournament ever – is just about a week away, so if you haven’t settled your plans to catch the Russia vs Saudi Arabia opening match on 14 June, you better hurry up.

Should you watch the FIFA World Cup 2018 online/on TV?

Every 4 years when the World Cup season comes around, we have to decide – to pay or not to pay? I’m talking about cable TV subscriptions, not your bookie.

This year, it costs $112.35 to watch the FIFA World Cup 2018 games on TV. Because it’s a combined package offered by Singtel, StarHub and Mediacorp, it doesn’t matter which cable TV provider you’ve subscribed to. If you don’t have a cable TV box that’s fine too – you can watch it on Mediacorp’s Toggle.

If you don’t want to pay to watch the games at home, you’ll be glad to know that there are free screenings. Legal ones.

Even though there’s been public screenings of the past FIFA World Cups, people are still asking “Why can’t Singapore broadcast the FIFA World Cup 2018 for free?”

Can lah, bodoh! You just need to know where to go. Here are the top places to watch the FIFA World Cup 2018 matches for free. Be warned, though: As with all free things in Singapore, you can expect A LOT of people to turn up. If you don’t mind the crowd and are all for the buzzy atmosphere, go for it.

The People’s Association has announced that they will be screening the FIFA World Cup 2018 at 55 of their community centres islandwide. The first match will be broadcasted at 40 CCs, as well as the Tampines Hub. For the whole schedule, check PA’s Facebook page.

The world’s best airport never disappoints – Changi Airport is screening selected matches from the FIFA World Cup 2018 for free. There are more than 30 matches to watch, including the opening game and the finals. There’s even event games and quizzes for added fun. The event space is at the public area of Terminal 3 (Departure Hall North, near skytrain to Terminal 1).

For east siders, Downtown East in Pasir Ris is screening the live matches at the level 2 Event Square. If you’re into official merchandise, there are also dining promotions to look forward to – the 1st 30 people to spend $30 at any F&B outlet will receive a limited edition World Cup glass (the first match) and World Cup Russian doll set (the finals) on top of a $5 F&B voucher.

Member or not, you can catch free live screenings of the FIFA World Cup 2018 at all SAFRA clubs in Singapore. Although open to public, SAFRA members are entitled to special seating and have exclusive fan packs to win in the lucky draw.

HomeTeamNS is broadcasting the FIFA World Cup 2018 at 3 of their clubhouses – Sembawang, Bukit Batok and Balestier. Screenings are completely free and open to public, but of course, members get special perks. Here are the details:

HomeTeamNS Bukit Batok: Screenings will be held at the Main Lobby. HomeTeamNS members can pre-register online to purchase drinks and snacks.

HomeTeamNS Balestier: Screenings at Wiser Sports Bar. HomeTeamNS members get 15% off non-promotional items on the menu.

HomeTeamNS Sembawang: Screenings are at the popular prawning place Hai Bin. You can get the $10 bundle for 2 drinks and a snack. There’s also a very very worth it $80 bundle for groups for 4, which includes food, drinks, a staycation and breakfast the next morning – great for midnight matches.

As part of its Festival of Football, Sports Hub is screening the FIFA World Cup 2018 for all the watch! The event includes fun games and contests, and is great for some family quality time. Most of the highly anticipated matches will be screened, including the knockout stages and finals. See here for the screening schedule.

Okay, so this is not exactly free, but you can buy a $2 drink and grab a seat at any one of 22 McDonald’s outlets across the island. And I’m pretty sure if you just stand around nobody will kick you out either.

McDonald’s is my favourite option in the list, because there’s nothing quite like fast food and the World Cup, right? McDonald’s has even introduced a World Cup-themed menu, including the return of the McGriddles. 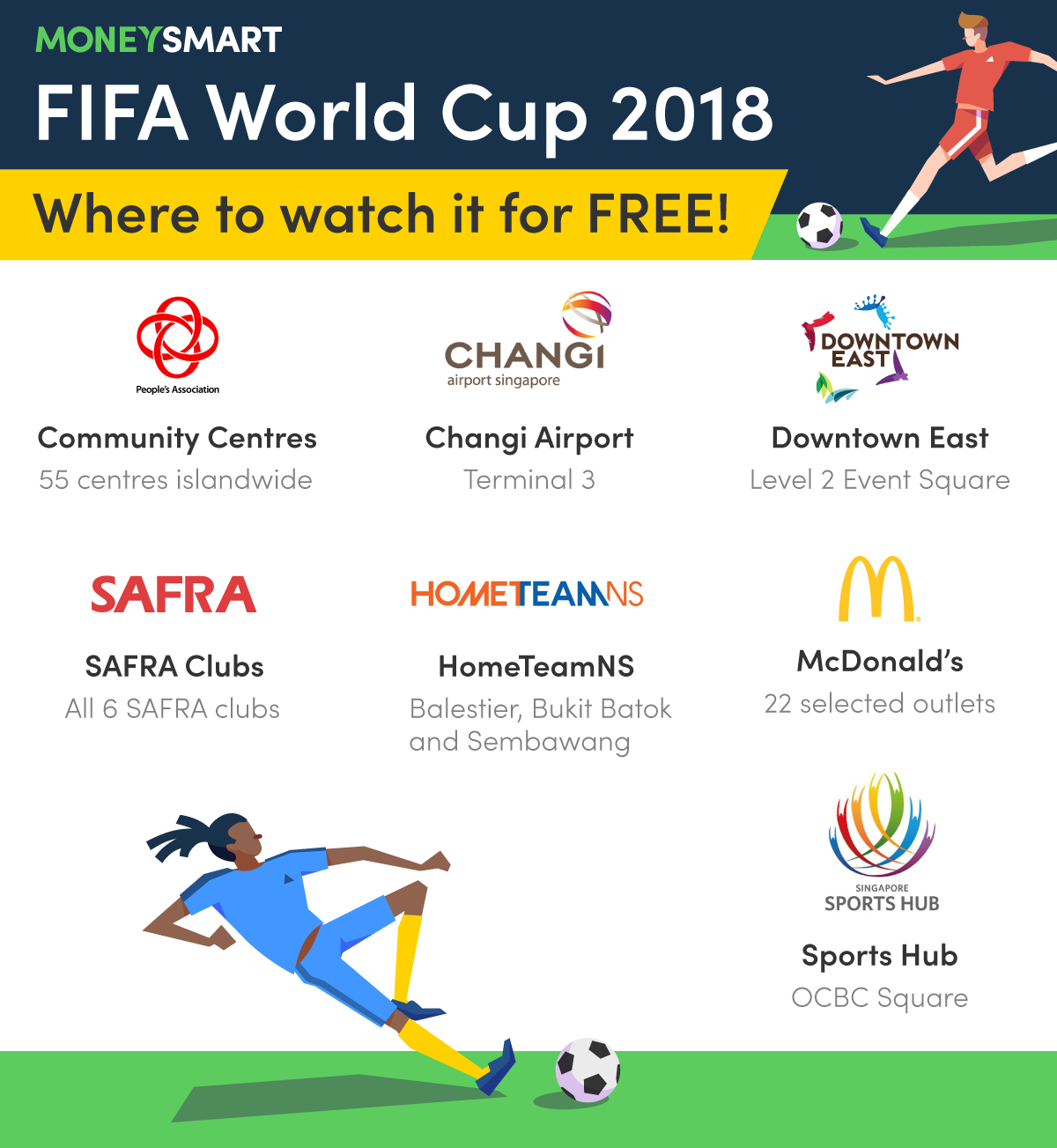 The free-to-watch venues will undoubtedly be swarmed with people, and while you shouldn’t expect these restaurants and bars to be empty, I expect them to be much less crowded. If you go early and manage to get a seat, you’ll probably be quite comfortable. We’ve arranged this list according to price range.

Some people will tell you to just buy a drink and glue your butt to the seat, and while that’s technically not wrong, bear in mind that these businesses paid quite a hefty sum to bring the live matches to you.

According to The Straits Times, they would have paid at least $2,876.16 (early bird) for standard screens. If they have the huge screens (over 50 inches), it’s $5,016.16 and up. So if you want them to bring it back for the next world cup, just buy some food also lah.

So there you have it. Have fun this FIFA World Cup 2018 season!

Have any tips to watch the FIFA World Cup 2018? Share it with us in the comments below!

Cheap Beer in Singapore – A Guide on Alcohol Delivery, Happy Hours and More