Is the Straits Times Subscription Worth It? 7 Free or Cheaper Digital News Alternatives

Singapore’s flagship newspaper the Straits Times seems to have a complicated relationship with its readers, alternately blowing hot and cold with its on-again, off-again ST Premium firewall.

If you’re not particular about where you get the news, you can usually get Singapore news from free sites like Channel News Asia or Mothership.

But what if you hit the firewall while trying to read Sumiko Tan’s latest think-piece about men in Singapore? Could you ever justify paying for a Straits Times subscription?

The Straits Times subscription vs newspapers around the world

The Straits Times isn’t the only newspaper that puts up a firewall and charges for access. In fact, paid digital news subscription is a common model adopted by news publishers around the world.

Surprisingly, not all publishers charge exorbitant rates for access to the news. You might be surprised that even hallowed publications like The New York Times charge quite affordable rates.

In fact, at least 5 big-name newspapers (The New York Times, The Times, The Telegraph, Wall Street Journal and Washington Post) have cheaper digital subscriptions than the Straits Times.

Unlike some news sites which give you, say, 10 free articles to read each month, the Straits Times usually just straight-up locks their premium content behind a firewall. 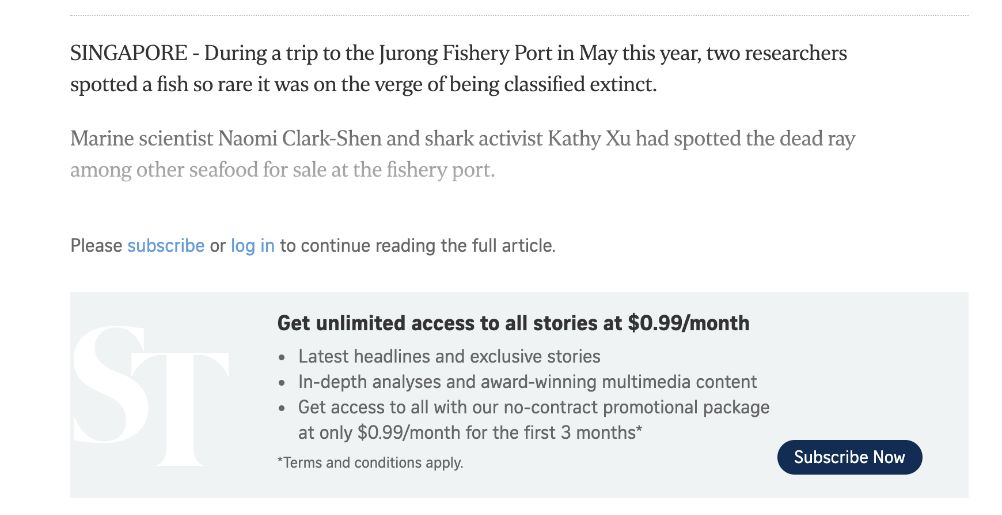 Note that the $0.99/month offer is only for 3 months and it’s for the Straits Times’ All-Digital subscription, which is normally $29.90/month.

There is no contract, though, so you can cancel after those 3 months and opt for the cheaper $14.90/month Basic Digital subscription. The main difference between them is the number of devices with access to the ST app (2 for Basic, 4 for Digital).

If your household still reads print newspapers, the All Digital + Print bundle is worth considering as the same price as the All Digital plan, except with $3/4/5 a month (depending on your housing type) added on for delivery.

You can see all the Straits Times subscription plans here.

Other English-language SPH subscriptions (from $7/month)

In case you were wondering, here’s what SPH charges for their other English-language digital / print newspapers:

If you’re one of those people who must have print newspapers at home, The New Paper print subscription ($7/8/9 a month including delivery, depending on property type) isn’t too bad.

The New Paper is more trashy than ST and focuses more on sports and entertainment news. However, it still covers the more important national headlines so you will be more or less up to date. The digital version of TNP is available for free.

On the other end of the atas scale is the Business Times. Again, some of their content is behind a firewall, and you’ll have to pay for access. Both Digital only and Digital + Print subscriptions are very expensive, though, at well over $30/month.

I’m willing to bet that whenever the Straits Times puts up a firewall for some news that’s of national importance, Channel News Asia immediately gets a spike in web traffic.

Owned by SPH’s sole rival, MediaCorp, CNA started out as a broadcast TV news channel, but its digital content is on par with that of the Straits Times.

In fact, CNA might be even better as many of their news articles are enriched with video content. The digital video-led CNA Insider “investigative journalism” series also tends to be quite riveting.

MediaCorp’s other news site is Today, which originally started as a free newspaper (remember when they had stacks of these at the MRT station?) and is now all-digital. It’s still free.

Despite being free, Today Online does have some pretty good journalists writing interesting content. Of note is The Big Read column, which has very meaty, in-depth articles about topics like education reform and climate change.

Side note: If you wish to supplement your “diet” with more regional news, a lot of national newspapers in Asia  publish their content for free.

Some good ones are South China Morning Post (HK and China news), the Times of India (India news) and the Asahi Shimbun (Japan news).

Some of the most recognised news publishers are based in the US, including the world-famous New York Times and the Washington Post. These 2 newspapers have won the most number of Pulitzer Prizes in the world.

Surprisingly, the NYT, WaPo and the Wall Street Journal (another big name in US media) charge some of the lowest subscription fees:

If you’re looking for world news, it’s pretty hard to beat the New York Times for value — not only is it widely regarded as one of the best news sources in the world, its digital subscription is also the cheapest for Singaporean subscribers.

The NYT’s subscription fee, which is billed every 4 weeks, works out to about $6/month for the first year and $12/month subsequently.

The Washington Post subscription fee costs about $14/month after the introductory promo. It’s similar to the NYT but more serious — I personally prefer the NYT more for its lifestyle content.

If you’re looking for an alternative to the Business Times, the popular Wall Street Journal — which slants a lot more towards business/finance, as its name suggests — is very affordable, too, at about $14/month after the introductory promo runs out.

Note that all 3 digital subscriptions are cheaper than the cheapest ST Premium plan!

Just note that the Singapore- and Asia-specific news coverage is rather lacklustre, but that’s easily remedied with CNA and Today anyway.

UK news: The Times, The Telegraph, The Guardian subscriptions

The other big names in news publishing are based in the UK. You would probably have come across publishers like The Guardian and The Daily Telegraph if you keep up with Brexit or Premier League news.

Along with The Times, these are the most respected names in the UK news industry. And, like their US counterparts, their subscription fees aren’t too expensive either.

Of the 3 Brit newspapers, The Times is the cheapest at about $9/month, but I personally feel that the content is a bit too UK-centric. Apart from football news, I’m not sure there’s very much relevant content in there for Singaporeans.

The Guardian is probably the best known one of the 3. It’s one of the most liberal publications around and regularly pushes out shareable think-pieces about identity politics. At the same time, it’s also revered by soccer fans for its excellent football news coverage.

Actually, you can read the Guardian’s content for free, but ads on the site will keep pleading at you to subscribe to help fund journalism.

If you are moved enough to sign up, it costs US$9.99/month for 3 months before reverting to US$19.99/month or approx. $28/month — almost as expensive as ST Premium All-Digital or Business Times.

An article about paid journalism wouldn’t be complete without mentioning The Economist, the popular UK-based weekly magazine on politics, economics and society around the world.

A subscription to The Economist is also often recommended for JC students who want to do better in GP.

It’s certainly a respectable publication with a lot of in-depth analysis, but it’s also really expensive. Here are The Economist’s subscription plans for the print and digital editions:

The Economist also publishes content on its website, but you can only read 5 articles for free if you’re a non-subscriber.

While I’m sure that the content is nothing short of excellent, if you’re trying to improve your understanding of the world and brush up on critical thinking, it’s probably just as effective to opt for one of the more affordable international news subscriptions above.

Entertainment
What the Heck is Short Selling? Here’s What We Learnt from GameStop

Entertainment
9 Best Shooting Games in Singapore: Laser Tag, NERF, VR games and more
Sign up for our newsletter for financial tips, tricks and exclusive information that can be personalised to your preferences!