So you think Laneway is for wimps. You want to go to a real music festival, one with mud, tents and portaloos. Fuji Rock Festival, which is happening from 24 to 26 July this year, is a favourite of globetrotting Singaporeans who delight in showing off their pics on Instagram.

And thanks to a weak exchange rate and being situated not too far from our sunny shores, it is actually one of the more inexpensive high profile festivals to hit up. Don’t get us wrong, tickets are not cheap. But at least you won’t need to pay for a $2,000 air ticket or drive for days through the desert. Let’s break down the cost:

First of all, you will need to fly to Tokyo, unless you plan to swim across the South China Sea. No, it does not cost one grand to go there, unless you insist on flying Singapore Airlines. Use a service like Kayak and you could should be able to find tickets in the 500 SGD to 600 SGD range if you book in advance.

In fact, if you book today and use a budget airline like Air Asia, you can get to Tokyo in July for under $400. You heard it here first.

Fuji Rock Festival is held at Naeba Ski Resort in Niigata prefecture. Okay, so you have no idea where that is. If you’re not going to rent a car, you will need to take a train from Tokyo to Echigo Yuzawa Station, and then take a shuttle bus to the festival grounds.

The cheapest way is to take the local train (NOT the Shinkansen, that costs almost double the amount) from Ueno station in Tokyo. Ride the JR Takasaki line to Takasaki, change to the JR Joetsu line to Minakai, then Joetsu line extension to Echigo Yuzawa. Yes, it sounds confusing, but this being Japan you can expect efficiency and exemplary service, so try not to stress out. The journey takes about 2.5 hours and costs 3,260 yen (36.54 SGD) one way.

TIP: If you’re travelling with 1-4 friends, get the seishun juhachi kippu, which gives you 5 unlimited travel coupons, each valid for one day and to be used within 5 days from the day of purchase, for 11,500 yen (128 SGD). Even if there’s only two of you, it’ll cost you only 815 yen (32 SGD) one way, which is even cheaper than buying a single ticket.

Getting to the festival 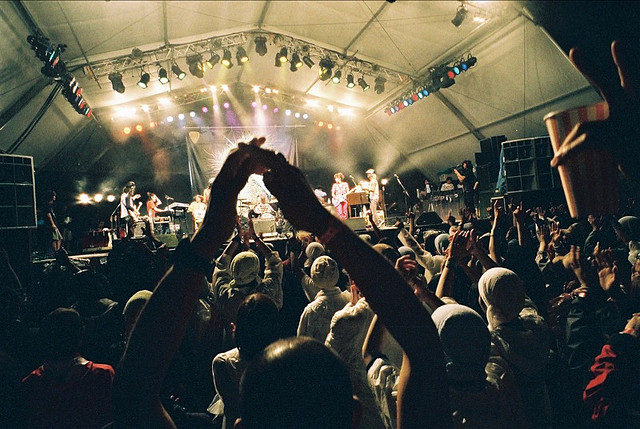 From Echigo Yuzawa station, there’s a shuttle bus that drops you directly at the festival grounds. The ride to the festival costs 500 yen (5.60 SGD) and the journey back to the train station is free.

Unlike festivals like Tomorrowland, you won’t be able to find hotel-like accommodation on the festival grounds. Unless you’re coming in your own caravan, which we think is… unlikely, you’ll be camping out in the open. Hey, you said you wanted a real festival experience, right?

You’re responsible for sourcing for your own camping equipment, so it’s time to visit the Beach Road Army Market. Camping costs 3,000 yen (34 SGD) per person for the entire duration of the festival, which is definitely much less than you’d pay to stay in a hotel.

If you’re not staying on the festival grounds, sorry, but unless you booked your accommodation back when you were sitting the O levels, it’s unlikely you’re going to be able to find a hotel within walking distance of the festival at a reasonable price.

A cheaper alternative would be to stay near Echigo Yuzawa station and then take the shuttle bus to the festival grounds each day, although you can expect hotels there to be in short supply as well.

We say go with the camping. Even if you’re squeamish, this is Japan after all, so you can expect a high level of hygiene. 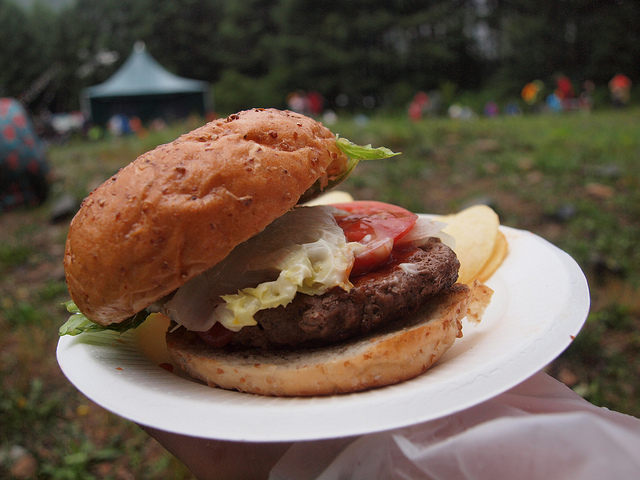 The average drink or snack on the festival grounds costs about 600 yen (6.70 SGD), which compared to our own alcohol prices isn’t too expensive, but the cost can really add up if you’re there for the full 3 days.

TIP: You are totally allowed to BYOB, so take full advantage of it. To cut costs, exit the festival grounds and patronise one of the cheaper alcohol stands set up outside. If you need mixers or don’t drink alcohol, there are vending machines selling stuff like Pocari Sweat.

One thing you need to take note of, though, is the fact that you cannot bring in glass bottles and cans, and they will check your bags to make sure you don’t flout the rule. So what festival goers do is to come armed with an array of plastic bottles.

Okay, so it’s not the cheapest way to spend a long weekend. But considering your flight alone to another high-profile festival like Glastonbury would cost at least $1,000, this is a fairly affordable way to experience a full-blown festival.

Are you planning to go to Fuji Rock Festival or have you already been? Tell us in the comments!