The days when vegetarians were relegated to that one mock meat stall at every hawker centre are over.

Plant-based meats are making the rounds in Singapore, with vegetarian food products that look identical to their meat-based counterparts now widely available at supermarkets. More restaurants and cafes are using vegan meat from Impossible Foods and Beyond Meat too.

What’s more, Singapore now has a new claim to fame: being the first country in the world to approve the sale of lab-grown meat. But before the world starts to wonder if it’s ready for that, let’s figure out the atas mock meats first.

There’re many reasons to reduce one’s consumption of meat, from the contribution of factory farming to climate change and animal cruelty to the increased health risks of copious consumption of red meat.

The alternative is to turn to vegetarian meats. They look and taste like meat, and offer even similar nutritional value and calories. In fact, a vegetarian meat patty is supposed to be as filling as an actual meat patty. Its composition can also be adjusted to be more nutritious with more proteins and amino acids.

That being said, it’s not all rainbows and unicorns. Meat alternatives are processed foods, so they cannot substitute the fresh fruits and veggies that you’ll need for a balanced diet.

In any case, whether you’re a full-fledged vegetarian or vegan celebrating your newly expanded food options or an omnivore looking for ways to reduce your meat consumption, you’ve got to first sample these new meat alternatives before deciding whether to make them a part of your diet.

Australian company Beyond Meat’s plant-based meats not only look and taste like the real deal, but also cook similarly and have a similar nutritional profile, with 20g of plant protein per serving. All meats are made without soy or gluten.

As proof that they’ve gone mainstream, Beyond Meat products are now available at local supermarkets such as NTUC FairPrice, Cold Storage and RedMart. A 453g pack of minced beef currently costs $24.95 on RedMart.

Want to dine on Beyond Beef without having to cook it yourself? Visit Nature cafe, Mezza9 (at the Grand Hyatt), Original Sin and most Harry’s Bar outlets for a taste of Beyond Burgers.

Impossible Foods’ products are made from soy protein and their beef substitute tastes very close to the real thing. They’re currently working on creating pork substitutes.

Quite a few restaurants offer Impossible Meat in their menus. Potato Head is one of the first places to offer the Impossible Burger, with vegan and vegetarian options available. Others include The Marmalade Pantry (Impossible Truffle Burger), Tanuki Raw (‘meat’ and tofu salad) and Bread Street Kitchen (vegan Beef Wellington).

If your idea of a treat is a salty slab of luncheon meat oozing with oil, then OmniMeat’s plant-based pork will appeal to you. They’ve got meat-free pork strips and luncheon meat that’ll give you a sodium kick while being more heart-friendly.

For quite some time now, local supermarkets have been selling their halal all-purpose plant-based meat, which as the name suggests, is a generic ground meat product. The new luncheon meat and pork strips were launched recently and will soon be available at supermarkets like Sheng Siong and RedMart.

At the moment, a 230g packet of OmniMeat all-purpose plant-based meat costs $8.50 on RedMart, while a 6-piece packet of the luncheon meat is retailing for $9.35 at NTUC FairPrice.

UK brand Quorn sells a range of vegetarian meat products including vegan burgers, crispy nuggets, fish fingers, fillets, sausages, burgers and mince. Their products are made from a fermented protein derived from fungus that grows in soil.

Sounds a little scary, but given the wide range of products on offer, they’re worth a shot if you’re looking for something beyond the usual burgers and mince.

Another advantage of Quorn products is their very competitive prices. A 300g packet of Quorn mince costs just $6 on RedMart.

Many Singaporeans go to Ikea more often to eat their Swedish meatballs than to buy furniture. Instead of braving the crowds, you can try cooking the plant-based version at home. They’re made of ingredients like yellow pea protein, oats and potatoes, and are an improvement of an earlier version which didn’t have the look and texture of the original meatballs.

While they resemble the real thing visually, they don’t really taste that similar to the meat version. That being said, they are quite tasty in their own right.

Can you save money by going meat-free?

Fake meat is quite expensive compared to real meat, if you consider the new generation of ultra realistic meats from Beyond Meat and Impossible Foods costing, quite frankly, a bomb.

But that doesn’t mean that being vegetarian has to be expensive. It all depends on what you’re eating. If you have meat substitutes at every meal, then yes, you will be paying more than if you choose actual meat.

But if you stick mainly with non-processed foods like fruits, vegetables, grains, nuts and tofu, you’re likely to end up saving money, as meat tends to be relatively expensive compared to plant-based whole foods.

After all, there’s a reason economy rice is cheaper without meat. 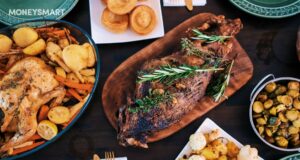 Dining
How Much Do Singapore Airlines’ Home Delivery & Inflight Meals Cost Anyway?
Sign up for our newsletter for financial tips, tricks and exclusive information that can be personalised to your preferences!