Is It Really Possible to Switch Jobs to a New Industry Without Suffering a Pay Cut in Singapore?

Nobody these days expects you to stay in your company, or even in your industry, for life. I know a lawyer who didn’t show up again after his first day at a new firm, so desperate to get away that he left his tie behind in the office. Before you’re even a month into your new job, your boss is already trawling through resumes looking for a candidate to replace you when you move on.

So maybe you want to do something a little more creative or analytical than simply filling up timesheets so your boss knows he’s not paying you to do nothing. Or maybe you’re just sick of wearing a tie to work every day. If your industry is a little less than stimulating, we’ve got news for you.

This graph from LinkedIn shows that there are many industries out there with a history of recruiting a significant portion of people from other industries. 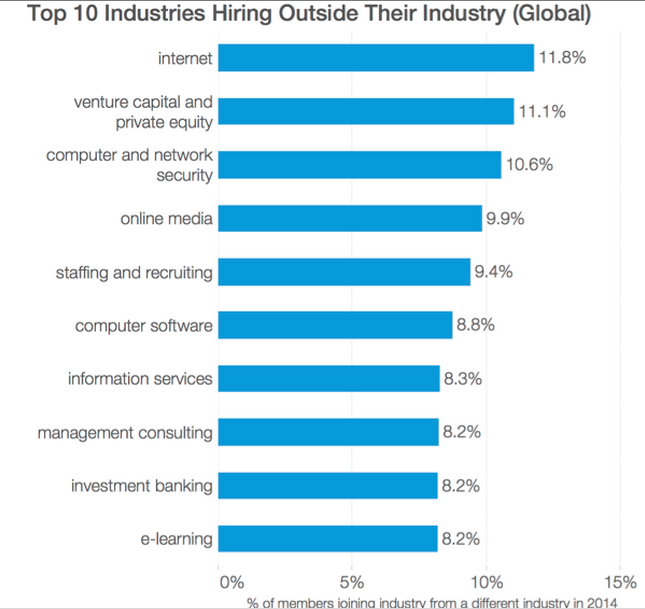 Why make the switch?

Sometimes, the working environment could be a huge reason your job isn’t working for you. Singaporean workers consistently display their dissatisfaction with their jobs in surveys, and a rather rigid working environment might be to blame, as employees report feeling undervalued.

The rather hierarchical way of regarding working relationships can be off-putting for younger workers, and certain industries are infamous for punishing working hours. In a 2014 survey, 82% of the respondents said they were working beyond the hours indicated in their contracts.

Based on the above graph, tech and web industries have particularly strong track records in hiring from outside the industry. Just because you’re not a programmer doesn’t necessarily mean you don’t stand a chance, as many larger tech companies need marketers, HR professionals, accountants and legal counsel. In addition, many types of online work such as social media management are new enough such that even those without specific experience may be considered.

Does that mean you have to start from scratch?

If you have a role that lets you make a seamless transition to your new industry, or if you have a skillset that overlaps that required in your new role, no, you likely will not have to start from scratch as a hire with zero experience.

For instance, Larry, who was featured in a previous article here on MoneySmart, worked as a graphic designer and then as a project manager in a variety of industries, including a web development agency and an educational institution. He was able to utilise his skillsets in some very different workplaces and working environments. Each time he changed jobs, his salary rose. In the same vein, the Straits Times regularly recruits as journalists people with expertise in fields such as finance, education and law.

Even if you think you don’t have any relevant experience, try and comb through past projects to see if there’s anything you can leverage. If all all fails, try to worm your way into relevant projects or freelance a bit on the side before making the leap.

If you really have zero relevant experience and want to make a 180 degree switch, you will probably have to be satisfied with a pay cut, especially if you’re entering the civil service, where salaries are pegged to factors like education and years on the job. Of course there are exceptions, for instance if you are moving into a very high paying industry like investment banking.

If you’re working in a sunset industry, it might actually make sense to jump ship to one that’s thriving even if you have to take a pay cut at the start. You could well end up making more somewhere down the road.

31-year-old Marcia, who formerly worked in the public relations industry, made the switch to banking a few years ago. She now works in compliance at a local bank. “When I first joined, I had to take a slight pay cut as they only wanted to pay me what they were paying fresh grads. But my salary has risen quite quickly and after 4 years I’m earning  more than I would be earning if I had stayed in PR,” she says.

What can you do to minimise the damage?

People often think switching industries is so hard simply because they have no idea just how diverse job descriptions can be for work at a company that’s on the large side. For instance, Facebook Singapore hires a whole ton of people with varied job descriptions, from finance analysts and public policy experts to Japanese-speaking salespeople and ad guys.

If you’re interested in breaking into another industry, research the hell out of as many companies as you can, then go out and meet people in that industry and find out who they work with. Chances are you’ll discover that somewhere out there, someone is willing to hire you to do something that doesn’t make your past years on the job a complete waste.

Have you ever made an industry switch? Tell us how it went in the comments!

Career
Going Freelance? Here’s How You Should Plan Your CPF & Finances For 2022
Sign up for our newsletter for financial tips, tricks and exclusive information that can be personalised to your preferences!