Reading about the rise of car insurance fraud claims in the news must be bittersweet to many drivers who were victims of such syndicates. More than a few of us (including one MoneySmart employee!) have been in situations where we’ve had our suspicions about the true nature of a car accident that we’ve been involved in.

We spoke to one driver, Wilson, who shared with us the details of a recent accident along the PIE. This is his story as recounted to us:

My situation is slightly unique because of the nature of my work. I had exchanged cars with a friend due to his car needing some vehicle maintenance. I run a car workshop and was bringing his car in, and so my friend was supposed to bring my car, a Honda Jazz, back to me. This was when the accident occurred and this was what was recounted to me.

My friend had left his office in Tuas early to return the car and he was driving along the PIE towards Changi back in December 2016, when he was involved in a chain collision involving 4 cars and 1 motorcycle. It was about 3.45pm at the time of the accident. My car was the last of the four cars, but a motorcycle behind couldn’t stop in time and collided into my car, technically making it the last vehicle in the accident.

Immediately, he noticed two men approaching the accident site. The car they were in was not involved in the accident, but they were handing out name cards to the other drivers of the damaged cars. They were offering to help with their repairs, and were overheard saying things like, “Guys don’t worry, your insurance wont be affected, that Jazz is the last car. I will help you with your repairs.” 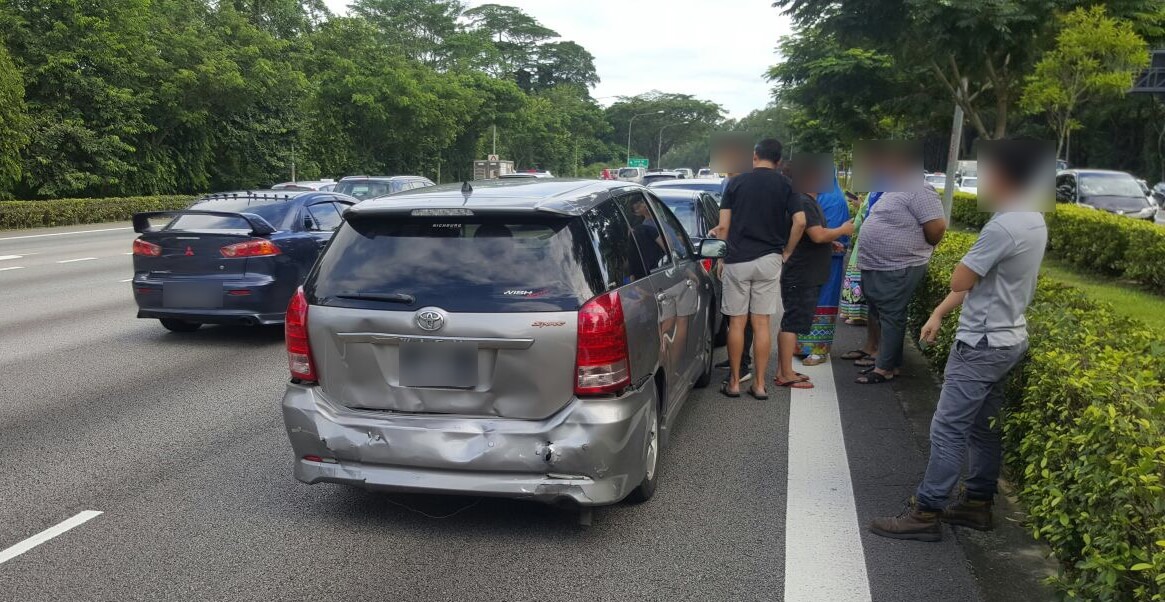 My friend found it very suspicious that they seemed to be isolating us from the conversation. He had approached one of the two men to get a name card and was refused one.

On our part, we spoke to the driver of the first car, and they claimed that they had hit the brakes because the car in front of them had done so as well. It turns out that this was the car that the two men were in. As both my friend and I are familiar with the car industry, his suspicions were at an all-time high, and we wondered if the first car was targeted because it had no in-car camera, or if it was because the driver was young and female, or both.

Or maybe the female driver was also in cahoots with the two men, since she took the two men up on their offer and left with them. When my friend tried to take a picture of one of the men who had stepped out of the first car, he shouted, “Do not take my picture, I am NOT involved in this accident!” Which led us all to think – if you are not involved, why did you come out? To help? To distribute name cards? This was all a very weird mix of events.

But here’s the “best” part: when the Traffic Police marshalls came and spoke to my friend, one of them commented, “Looks like the same people over and over again. And this spot doesn’t have traffic surveillance cameras.”

Fortunately, while the damage to my car was extensive, it was superficial. There was no damage to the engine or the chassis. I got it repaired and managed to sell it 6 months later.

However, my insurance company is still fighting my case. There was a $42,000 claim against my policy. They involve 2 medical claims and 1 vehicular claim.

This means that not only is my 30% No-Claims Discount now suspended, but the car insurance for my new car is almost $4,000, compared to a quote of $1,667 for my wife whose records are clean but has never owned a car. I know it is not the fault of the insurance company, but the loss of NCD and the high insurance premiums leave a very bad taste in my mouth.

What was the purpose of the scam?

Clearly, they covered all the bases – offering to handle insurance claims as well as accident repairs. They stage the accidents and then earn money from the unsuspecting victims. It’s hard to know whether those claiming against my insurance were legitimate or part of the scam.

Are these scammers still operating?

Mine was not the first or the last time such a collision happened at that spot. I understand that there are no traffic surveillance cameras there, and that’s why it’s such a popular spot for these scammers and syndicates.

Just some days ago, there was a 12-vehicle collision along the same stretch of the PIE. It was also due to the sudden braking of a vehicle in front. Is it the same group? Or someone else?

What can we do when we encounter such situations?

Here are a few points to take note of:

Surely more can be done?

It’s easy to feel helpless and believe that these scammers are going to get away scot-free. If certain areas tend to be targets for these syndicates, the authorities should look into ensuring there’s better surveillance and that these stretches of the expressway don’t become a blind spot.

Ultimately, the authorities need to be given more leeway to prosecute suspected scammers. If a person is giving out name cards, or recommending a workshop soon after an accident, victims should be able to report them. This should help with identifying who is involved in a syndicate. Even if they’re not, at least there is some record of their engagement. In Wilson’s case, they weren’t even involved in the accident so really had no business being there.

Currently, you’re also required to notify the police if someone is injured in an accident. This should be more strictly enforced so that it prevents fraudulent medical claims from popping up later. In the story above, there was no injury reported, nor was the accident severe enough to plausibly believe that not one but TWO medical claims could be made. And yet Wilson still has to deal with a massive insurance claim against him.

But ultimately, here’s the thing – if these scammers continue to get away with these ridiculous “staged” accidents, you could lose a lot more than just money. In the case of Wilson’s friend, the accident he was involved in wasn’t severe. But imagine if the biker at the back had fallen awkwardly onto the road and had gotten hit by a car in the next lane. Not only is a life lost, but the other people involved in the accident also have to bear the trauma of the loss as well.

Have you ever been involved in a car accident that you suspect was part of a scam? We want to hear your story. 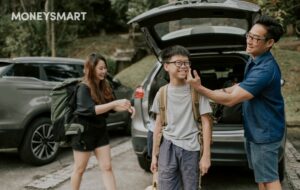 Car Insurance
Buying a Car But Worried About High COE? Tips to Keep Other Costs Within Budget

Car Insurance
Insurance Claims in Singapore: How They Work & What You Need to Submit
Sign up for our newsletter for financial tips, tricks and exclusive information that can be personalised to your preferences!