9 Unbelievable Vending Machines in Singapore – Get Chilli Crab, Salmon and even Books

Once upon a time, when I popped $0.80 into the vending machine, I got an ice-cold can of coke. Now, nothing costs $0.80 anymore and there are vending machines for stuff like freshly squeezed orange juice, fresh salads and even chilli crab.

If you remember, there was recently a huge hoo-ha over mystery prize vending machines in Singapore. For the uninitiated, you basically pay $5 or $10 to get a mystery “prize” worth up to $1,234,567 or something. Obviously the authorities caught on and deemed the concept to be a  form of public lottery, so now it is illegal.

However, don’t despair. While you won’t be able to pay 5 bucks for a tiny dose of adrenaline and hope anymore, you can still get some pretty cool stuff with these 7 quirky vending machines in Singapore:

You’ve probably seen these around: iJooz’s orange juice vending machines feature a huge “$2” sign, and a see-through window where you can see the OJ being squished out of the fresh fruits. In theory this sounds like a dream, but looking at it is the reason i haven’t mustered the courage to try iJooz. The “rollers” always have some residual fruit on it, and I can’t help but wonder how long ago it was from…

That said, most of the reviews I’ve read seem in praise of the fresh juice. It’s not a bad deal at all – each cup only costs $2, and contains 100% juice from 4 oranges. That’s even cheaper than hawker centres and food courts, and those come diluted with ice (and sometimes water!).

iJooz is partners with Capitaland, Changi Airport Group and many others, and have many machines islandwide. Check out the iJooz locations here.

Winning Hello Kitty toys at arcades is the ultimate sian zabor move, and with these Happy Ice ice cream vending machines, you can practise your skills. Unlike regular vending machines, these actually make you work for your treats. They’re UFO catchers (crane games), and you have to “kiap” your ice cream with the claw.

Before you flip the table in protest, chill. You get unlimited tries. I’ve tried it and the catch rate seems pretty high. Plus, the claws are reasonably big and can hold 2 ice-creams (just in case you’re greedy or just want to up the ante). Depending on which location the machine is at, it’s $2.50 or $3 to play.

Chef-in-Box VendCafe is a chain of 10 vending machine cafes in Singapore. We went to the one at Ang Mo Kio and there were standing tables, but no seats. Despite all the hype, the food was disappointing, and pretty much what you’d expect of microwaveable 3-minute meals.

$4 can buy you classic choices like spaghetti bolognese, mutton rendang biryani and claypot chicken rice, while $6 gets you the more premium stuff from the World Chef Series. When we went, there was Bibimbap, Spicy seafood rice and more. We chose the Goa vegetable curry by Chef Satish Arora: 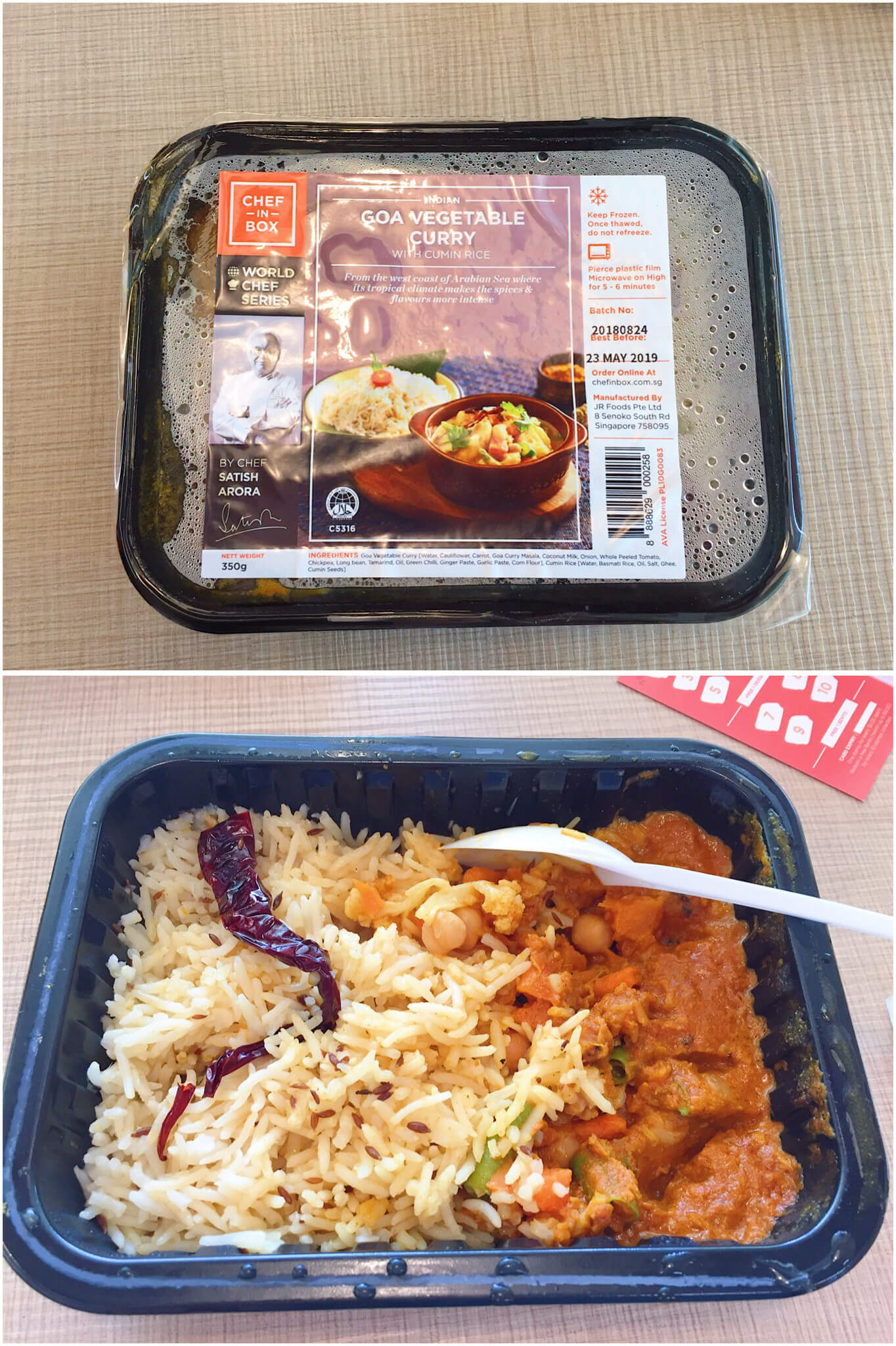 First launched in Yishun in front of the Kopitiam food court, you can now buy frozen salmon fillets from vending machines. Gee, Singaporeans do love their salmon…

Hmm, we’re a little confused why people would so urgently need a slab of salmon that they would go to a vending machine for it, rather than their usual supermarket…

I guess one selling point is that it is slightly cheaper than RedMart’s Silversea Salmon, which costs $5.99 for a 150g slab of frozen salmon.

But yeah, if you’re looking for a quick salmon fix, there are around 14 of such machines in Singapore now.

I guess this one is a slap on the face for those who whine about how hard it is to find affordable, healthy meals in Singapore. Shake Salad‘s vending machine sells salads, sandwiches, fruits and granola cups, which is basically everything your weight- and health-conscious colleague eats.

The healthy food costs $6 to $9, depending on what you order. You can have a look at Shake Salad menu here, and check out their 19 salad vending machines here.

Want to grab a book but don’t have the time or energy to look for recommendations? BooksActually’s vending machines is your solution. Each of these book vending machines can hold 120 to 150 books, and mostly carry the works of local authors so you can #SupportLocal. They cost $10 to $22 per book.

If even at the vending machine you cannot decide what you want, opt for the mystery book ($19)! It’s literally a random book that’s wrapped in paper so you can’t see the title. This concept is genius because it’s godsend for indecisive bookworms (and perfect for clearing hard-to-sell titles).

Feel like you’re hair is out of shape in the middle of the day? You can grab a wax or pomade at one of the 12 SG Pomades vending machines islandwide. They have hair styling products such as the Arcadian Clay Pomade ($28), Ubersuave Texturing Matt Wax ($20), as well as accessories like combs.

As if it isn’t enough that House of Seafood is a household name and that their crab dishes are award-winning (they hosted Donald Trump and Kim Jong-Un), the restaurant has crab vending machines. You can choose between chilli, black pepper or salted egg crabs, but they cost $60 for 1kg, which is kind of expensive.

The vending machines operate 24/7, so if for whatever reason you need to have chilli crab at 4.37am in the morning, you actually can. The vending machine is located at House of Seafood’s Punggol Settlement outlet though, so unless you stay in the super ulu Punggol…

Have you ever thought, “What’s the most expensive thing you can buy from a vending machine?”

No? Me neither. But in case it ever comes up in conversation, here’s the answer: A secondhand supercar.

AutoBahn Motors (ABM) is a used car dealer which owns the 15-story “car vending machine” in Jalan Kilang, Bukit Merah. Instead of a conventional showroom, you can sit on their ground floor office and pick the cars from a touchscreen display. If you want to see or buy it, you press a button and watch it come down.

More than anything it’s a fancy, gimmicky car lift thing, but it’s kind of cool anyway. I don’t know how much the cars are, but there isn’t enough “investigative journalist” in me to go and ask how much a used Lamborghini is going to cost me.

What are some other cool vending machines you’ve come across? Share them with us in the comments below.

Top 10 Cult Tanjong Pagar Cafes – How Much Do Their Signature Drinks Cost?

Bubble Tea in Singapore: KOI vs LiHo vs Gong Cha vs TaiGai & More