If you’ve been lamenting the ever-escalating Grab fares and lack of promo codes throughout most of 2018 (RIP Uber – never forget), you’re in for a treat now that the famous Indonesian ride-hailing app Gojek has launched in Singapore.

And, unlike the kuching kurap ride-hailing apps that tried and failed to compete with Grab this year, Gojek actually has the muscle (read: a crap load of funding from the likes of Google and Tencent) to give Grab execs sleepless nights.

We’ll see how this simmering rivalry plays out in 2019, but in the meantime, here are 5 things you need to know about the new app:

1. When it was first launched, only half of Singapore could start using Gojek.

When Gojek was still in BETA mode in Singapore in November 2018, using it was not as simple as just downloading the app and booking rides right away. 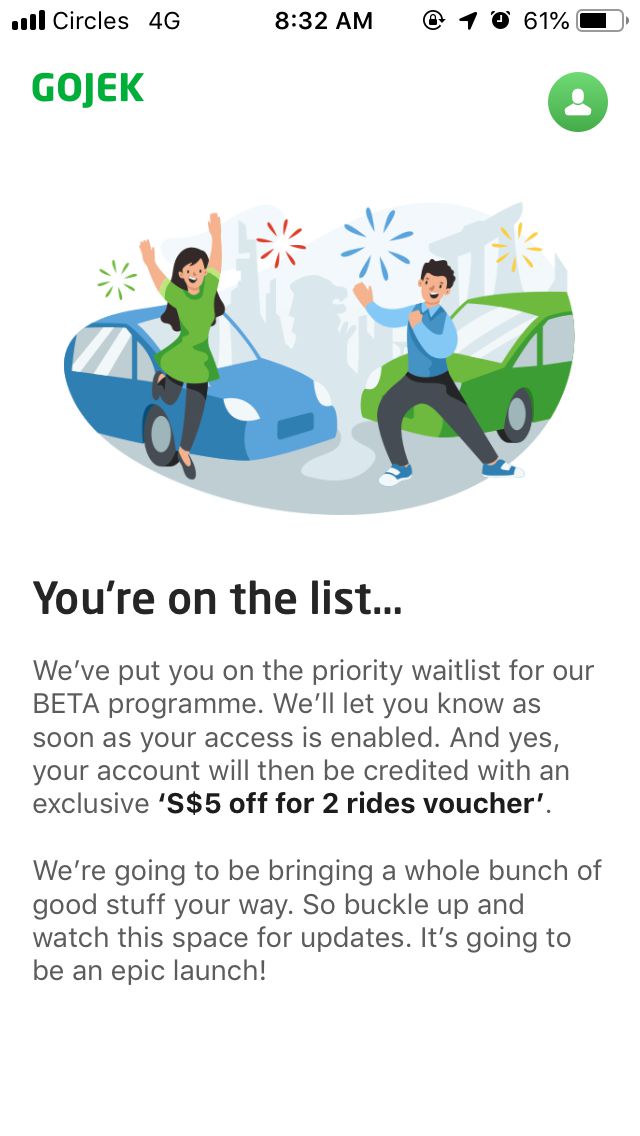 Instead, access was restricted to only DBS/POSB card holders… OK, fine, this was hardly a “restriction” since 99.9% of Singaporeans have a DBS/POSB account and/or card anyway.

After you’ve downloaded the app, you needed to key in an invite code (DBS + first 6 digits of your DBS/POSB debit/credit card number, i.e. DBS123456) along with the usual details while signing up.

Then, as though you were trying to get into some exclusive F1 afterparty, you would be placed on the waiting list.

However, since 10 January 2019, Gojek services were made available to all of Singapore. One downside to that though, they’ve stopped offering 2 x $5 sign-up promo codes.

2. Even without promo codes, Gojek fares are cheaper than Grab (for now)

Should you continue using Gojek after the first 2 rides? I say yes, you should take advantage of the cheap fares while the going is good.

According to ST, here’s the current fare structure for Gojek and Grab:

… But that means nothing to you and me, because we only care about the final amount, right?

A quick check showed me that the Gojek (GoCar) fare from Commonwealth to Orchard is only $7.30.

It’s theoretically possible to get a ride for $7 with Grab, but that’s for a GrabHitch (but that’s not as on-demand as a GoCar or GrabCar). JustGrab (either private cars or taxi) costs $12.

My brief price comparison doesn’t take into account the dreaded surge pricing, which makes Grab prices so astronomical that there’s now an insurance product to help Singaporeans deal with it.

On the other hand, since it’s early days yet, Gojek hasn’t introduced surge pricing in Singapore. So if you’re going to or coming from a high-demand area (like that NYE countdown party) it’s definitely worthwhile to have both apps handy to compare prices.

3. Hurray Westies and Northies, Gojek Singapore is finally in your area

Thinking of using your Gojek to go to Woodlands Checkpoint? (… Or is it just me then?)

Well, you couldn’t do that just a few months ago, because Gojek was limited to the central and eastern parts of Singapore.

Gojek Singapore isn’t just exciting for everyday consumers, it’s also great news for anyone who wants to make money as a driver.

For drivers, Gojek’s 20% commission (i.e. Gojek’s cut of each ride) is the same as that of Grab. Both platforms also allow you to cash in your earnings any time (minimum amount $50) – the money is transferred from your app “wallet” to your bank account.

In terms of incentives, however, Gojek works differently from Grab.

Grab has strict acceptance rate and cancellation rate policies, failing which, drivers will not be able to earn incentives. These have resulted in unintentional conflicts between drivers and passengers.

Gojek Singapore doesn’t have a specific acceptance/cancellation rate policy; incentives are based on your performance score (no. of completed trips / total no. of trips assigned) instead.

Achieve a minimum performance score of 85%, and you’ll qualify for two types of incentives:

While there’s no specified cancellation penalty or any minimum acceptance rate in the Gojek handbook, it does say that too many cancellations will affect your performance rating.

Two other pluses of Gojek over Grab to highlight:

If you want to pursue a career with Gojek Singapore as a driver, you can register on the Gojek Driver site.

5. Gojek Singapore is in BETA phase and is continually being fine-tuned

Gojek is still currently still fine-tuning its app based on feedback.

By the way, no need to worry about having to learn how to use Gojek because it’s very simple – thanks to its clean design and, uh, current lack of options. This video shows you what the interface is like:

Have you tried Gojek yet? Thoughts? Tell us in the comments!

Grab Drivers: Should You Consider GoJek, Ryde and Taxi Companies Instead?

Grab Has Beaten Uber in Singapore, But Are We the Real Losers?

Grab vs Ryde vs Tada vs Kardi vs Filo Ride vs Urge – Which Ride Hailing App Is Cheapest?

Budgeting
Chinese New Year Budgeting (2022) – How Much Does It Cost To Follow Tradition?

Budgeting
Bak Kwa Prices in Singapore (CNY 2022) – What Is Worth Queueing For?

Budgeting
Electricians in Singapore – Price Guide to 9 Best Electrical Services Companies
Sign up for our newsletter for financial tips, tricks and exclusive information that can be personalised to your preferences!