Does the Price of Oil Really Affect the Cost of Petrol in Singapore? 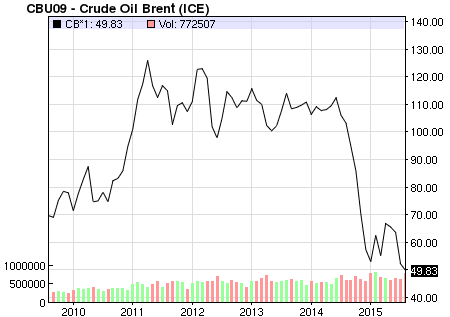 This chart is from Nasdaq and is for the Brent Crude price, one of the major benchmarks for crude oil. As we’ve mentioned earlier, we haven’t seen crude oil prices this low since 2009, and they don’t look to be going back up again any time soon.

So clearly there is some effect, but there are other factors at play.

So what are these other factors that affect price of petrol in Singapore?

Some petrol firms claim that crude oil prices only make up 50% of the petrol prices in Singapore. If that’s the case, then what determines the rest of the petrol price? Put into two broad categories, they are excise duties and GST, and handling costs and revenue.

At this year’s Budget announcement, it was revealed that excise duty rates for petrol would go up. This was a much overdue change, explained DPM Tharman, since excise duties had not been adjusted since 2003. Currently, the tax for premium grade petrol (rated 97-octane and above) is $0.64 per litre, while intermediate grade petrol (92- and 95-octane) is $0.56 per litre.

On top of these excise duties, the price of petrol is also affected by the additional 7% GST.

A day after the increase in petrol excise duties was announced, pump prices across the island increased accordingly. Most of the price hikes equalled or exceeded the amount of the announced duties, meaning that the companies were passing on the higher taxes directly to consumers. And why wouldn’t they? As we mentioned earlier, these taxes are meant to discourage drivers (to a certain degree).

This broad term is understood to include operating costs (including service station costs and transport costs), marketing costs (including discounts and promotions), capital costs (such as land costs) and revenue margins. These costs makes up the remaining 20% component of the petrol prices in Singapore.

Factors which impact these costs are currency exchange rates and market competition.

Also, in Singapore, where there are only 4 petrol firms for our tiny island, market competition can get complicated. Sometimes it may seem like they are colluding to increase prices simultaneously.

Other times, they may engage in price wars, much to the delight of Singapore motorists. In order to retain your business, these 4 companies also have loyalty programmes and try to outdo each other via petrol discounts and other promotions.

So with the low crude oil prices, are we going to see petrol prices drop any time soon?

Perhaps we’ll soon get to see prices drop below $2 per litre, but you can be sure that it’ll take a lot of factors before it can happen.

In fact, one could argue that there’s no need to keep watching petrol prices and that the real money saving strategy is in getting a good petrol credit card (or several!) and enjoying the 15% to 20% discounts.

What is your opinion of the petrol prices in Singapore? We want to hear from you.