Preparing for an overseas holiday usually involves a trip to the money changer at Mustafa or Change Alley in hopes of getting the best exchange rates, and then fearfully rushing home before someone robs you of those big wads of cash.

Now, thanks to multi-currency accounts, travel wallets and bank accounts, that could be a thing of the past.

Are these services too good to be true? Should you use them? And before you do, what do you need to know?

The DBS Multi-Currency Account lets you stash cash in up to 11 foreign currencies as well as the Singapore dollar.

There are a few types of DBS MCA, but the most popular one is the Multiplier account as it allows you to save SGD for your personal savings and gives you bonus interest for crediting salary and spending with a DBS credit card.

If you have the Multiplier already, you can easily use the “Transfer Funds to My Account” function to convert currencies. For other types of MCA, you transfer money in SGD to the account, exchange currencies and then leave the money in the account for future use.

They don’t charge forex conversion fees, which means their exchange rates are quite competitive compared to what money changers can offer. That being said, the best money changers such as Mustafa are usually able to offer slightly better rates. However, their rates can still be higher than services like YouTrip, TransferWise and Revolut.

You can link the account directly to a DBS debit card, which means that when you’re overseas you can use the card to pay rather than having to withdraw cash at an ATM machine.

The basic account is free and there is no initial deposit, however fall below fees ($7.50 a month, waived till you’re 29 years old) apply if your balance dips under 3,000 SGD.

You can transfer money from one of the above accounts to MightyFX and convert it to the currency of your choice. Their exchange rates are quite competitive compared to the average money changer. When you are overseas, you can then spend using the debit card which will be issued to you, thereby avoiding ATM fees.

There are no required minimum deposit or fall below fees for MightyFX (although the SGD account linked to MightyFX might charge its own fees). There is, however, an annual fee of $18 which is waived for the first three years, and subsequently if you make at least 12 Mastercard transactions per year.

No, you’re not dreaming. EZ-Link, the card you use to pay for the privilege of using the MRT, now a multi-currency mobile wallet that lets you make payments overseas.

How does YouTrip work? You top it up with money, exchange currencies in the process, and then spend using the card when you’re overseas.

The card lets you convert and make payments without transaction fees in over 150 currencies. The exchange rates offered are Mastercard wholesale rates. This means: closer than what is published on Google and better than most banks’ over-the-counter exchange rate.

Using their mobile app, you can also check rates and exchange 10 foreign currencies on the go, which is convenient if you’re hoping to catch the best rates.

This is a good card to use if you’re visiting a country whose currency is not accepted by any of the other accounts and cards, such as Vietnamese Dong or Icelandic króna. Be aware, however, you will be charged a $5 fee plus any foreign bank fees for using it to withdraw cash at an ATM.

Revolut is a mobile wallet that has launched in October 2019. You can use the service to remit money overseas at low fees and pay with the Revolut card overseas (you need to top up a minimum of $20 in your account balance to apply). Revolut uses mid market fees for conversion, which are lower than banks’ and more current than physical money changers.

The card allows you to spend in over 150 currencies and within the app, you can convert more than 14 currencies to store. There is also a “Vaults” feature that you can use to save money. For travellers who want to monitor the movements of a particular foreign currency, Revolut also allows you to set up “Watchlists”.

Revolut comes in 3 different membership tiers, Standard, Premium and Metal. For regular travellers, the Standard membership should be sufficient. If you would like to get LoungeKey Pass access and disposable virtual cards, you can go for the paid memberships.

Disposable virtual cards each come with their 16-digit VISA card number that can be used for online transactions. As they’re disposable, you protect yourself against fraud.

You can withdraw up to $350 using the card with no fee imposed by Revolut, but individual countries and ATM terminals may have fees. 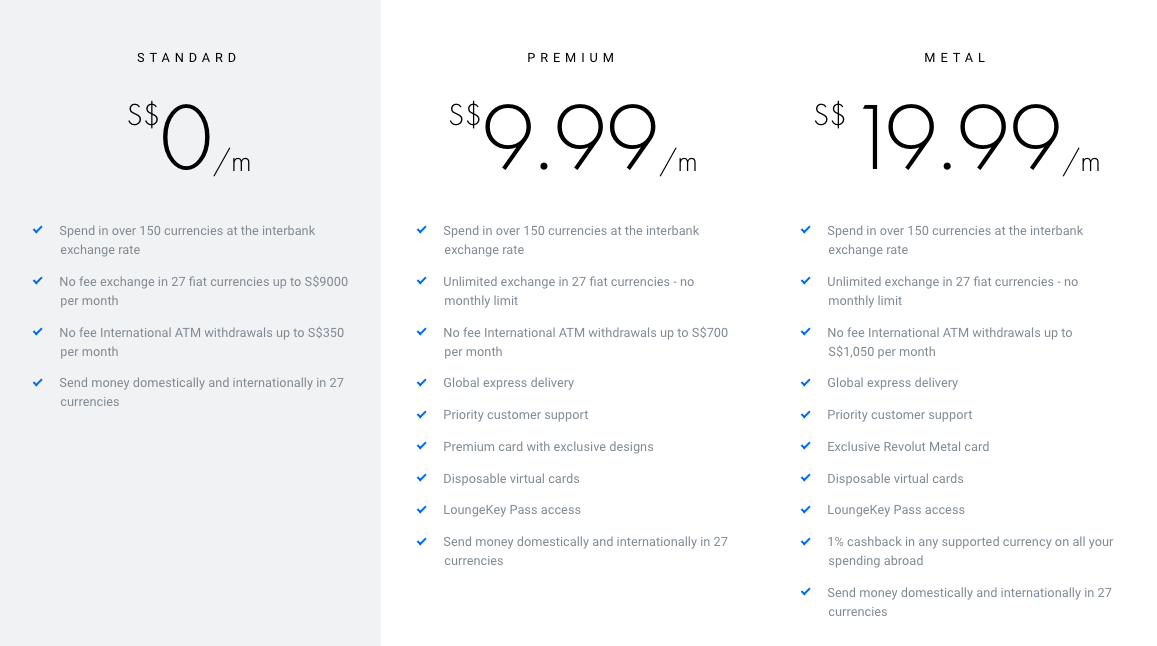 Revolut has been granted a remittance licence by MAS. It’s also one of the first banking apps of this kind to offer cryptocurrencies, but it remains to be seen if this option will be available in Singapore.

TransferWise is quite similar to Revolut in that it has both money remittance service as well as currency exchange. They also both companies that originated from the UK.

You can apply for TransferWise’s borderless debit card supported by Mastercard to spend worldwide. Unlike Revolut, you don’t need to top up any balance to apply for the card.

You can store 45 over currencies within TransferWise’s app by setting up different balances. The service is seamless and easy to use, and their promise is that what you see is what you get. The currency exchange rate and fees are displayed upfront so you can see how much you are getting when you are converting or remitting money. 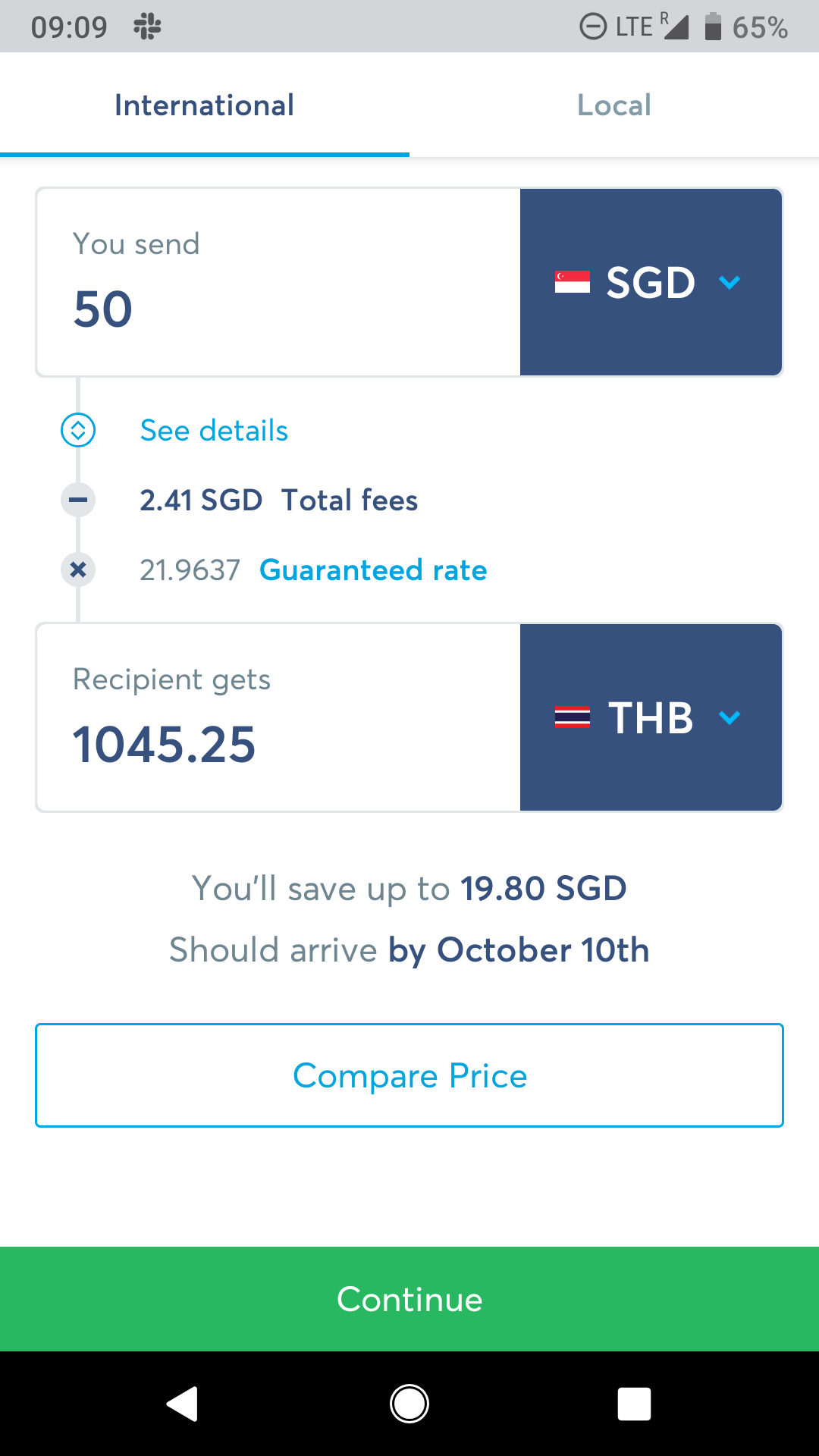 Although TransferWise has fewer features than Revolut, it’s easy to understand. This makes it appealing for the minimalist traveller who just wants to get lower conversion rates, nothing else. Sending money abroad is also at a much lower cost. TransferWise uses mid-market rates, which means less markup for consumers.

You can withdraw up to $350 using the card, but each country and ATM terminal may impose their own fees.

InstaReM started out as a company that only offered online remittance but they are going to launch their Amaze card. Sign-ups are currently open. It’s not really a travel wallet per se, but apparently it allows you to link your debit and credit cards.

When you pay overseas using this card, Amaze will automatically convert the money using VISA wholesale market rates and then charge it to the card that you have linked and chosen to pay with. This means no foreign transaction rates and better rates.

Plus, you potentially get to earn cashback, rewards and air miles from credit card programmes.

Locally, it can be used on public transport also, so technically, Amaze allows you to take along one card instead of a whole wallet-full. Or, add the virtual card to your Google/Apple Pay and have all your payment cards in your phone.

It remains to be seen if the Amaze Card is really as good as it is advertised, but we will update when we have more information.

The Citibank Debit Mastercard lets you withdraw cash at any Citibank ATM overseas without having to pay ATM fees or additional conversion fees. You’ll also enjoy better exchange rates than if you were to use a regular ATM card.

The main benefit of this card compared with most of the multi-currency accounts on this list is that you can withdraw cash for free if you do not want to or are unable to pay by card, provided you can find a Citibank ATM.

RHB TravelFX gives you the best of both worlds—the ability to exchange SGD for foreign currencies, and a card which lets you withdraw cash for free overseas. You enjoy up to 20 free withdrawals at Visa Plus ATMs per year.

Simply transfer SGD from any bank account (doesn’t have to be an RHB one) into your Card Wallet, and then select the currency to convert it to. You can do so using their mobile app for even more convenience.

There are no annual fees, currency conversion fees or fall below fees.

You also get free travel accident insurance when you purchase your return trip tickets with the card. This is no substitute for a proper travel insurance policy, but it is a little perk.

The main weak point of the RHB TravelFX is that since it’s a card rather than an account, you won’t earn interest on the cash you store in it. But given the fact that the interest being paid out by multi-currency accounts usually isn’t great to begin with, that’s no big loss.

It works like a regular savings account, and you can stash away your personal savings in SGD to earn tiered interest rates based on your top-up amounts (up to $2,000,000). To change currencies, you can download the HSBC QuickFX app where you can get real time currency exchange rates and make currency exchanges when the rates are in your favour.

With the HSBC Everyday Global Account, you will be issued the Everyday Global Debit Card, which you can use to pay overseas in 10 currencies and withdraw cash at HSBC ATMS worldwide.

Note: Paying by credit card is not always an option in certain countries

While many of the countries that Singaporeans are fond of visiting are advanced in cashless payments, there are some countries that rely heavily on cash, such as Laos and Myanmar. Even developed countries like Japan can have a preference for cash. In addition, some countries such as Indonesia also have issues with credit card fraud, so you might want to think twice about using your credit card for everything.

You’re also more often than not expected to pay in cash at certain types of businesses, such as market and street food stalls. If you have a debit card that allows you to draw money with no fees at overseas ATM networks, make sure the country that you’re going has an extensive ATM network.

So always do research on how acceptable payment by credit or debit card is at your destination, and plan to bring along an appropriate amount of cash.