What Exactly Are Fixed Deposit-Pegged Home Loans and How Do You Choose One?

When you think innovators, you think of Apple and the late Steve Jobs and how one iGadget after another quickly became the norm – everything from pocket-sized music players, mobile phones without keypads and computers that are no bigger than an A4 sheet of paper.

When you think innovators, you don’t think of banks. But now that products like fixed deposit-pegged home loans are becoming the new normal in Singapore, maybe local banks are the new innovators. I’m just glad they didn’t call it the iLoan.

What are Fixed Deposit-Pegged Home Loans?

DBS pioneered this product back in 2014 with the Fixed Deposit Home Rate, better known as the FHR. Since then, the FHR has helped DBS dominate the home loans market in the years since. Not surprisingly, several other local and foreign banks have followed suit, hoping to grab a piece of that pie with their offerings.

What should you look out for in a Fixed Deposit-Linked Home Loan?

While fixed deposit-linked home loans are becoming more popular in the market, they’re not very different from the home loan packages you’ve been used to in the past several years. So regardless of what kind of home loan package you’re getting, you should always look out for these factors:

It’s one thing to enjoy a low interest rate, it’s another thing to be unable to refinance without penalty once the interest rate goes up (and it will go up). Look out for packages that have lock you in for a short period of time. Some packages in the market today don’t even lock you in at all!

We’ll get into the specifics later in this article, but for now, we have to point out that referring to the fixed deposit interest rate is only half the story. The other half is known as the spread. So if you see a home loan package that looks like this:

Basically, it means that in the first year, you will be paying whatever DBS’ 9-month fixed deposit interest rate is (currently, it’s 0.25%), plus a fixed spread of 1.13%. In your first year, even though the FHR9 may change, the spread of 1.13% will not.

This is especially important when it comes to comparing – you need to compare home loan interest rates in total, and not just focus on the fixed deposit interest rate that the package is pegged to.

Okay, so which Fixed Deposit-Linked Rate should I choose?

There are currently 5 fixed deposit-linked rates available in Singapore. The three local banks are represented, but there are also two foreign banks – Standard Chartered and Maybank. Here’s what the packages currently look like: 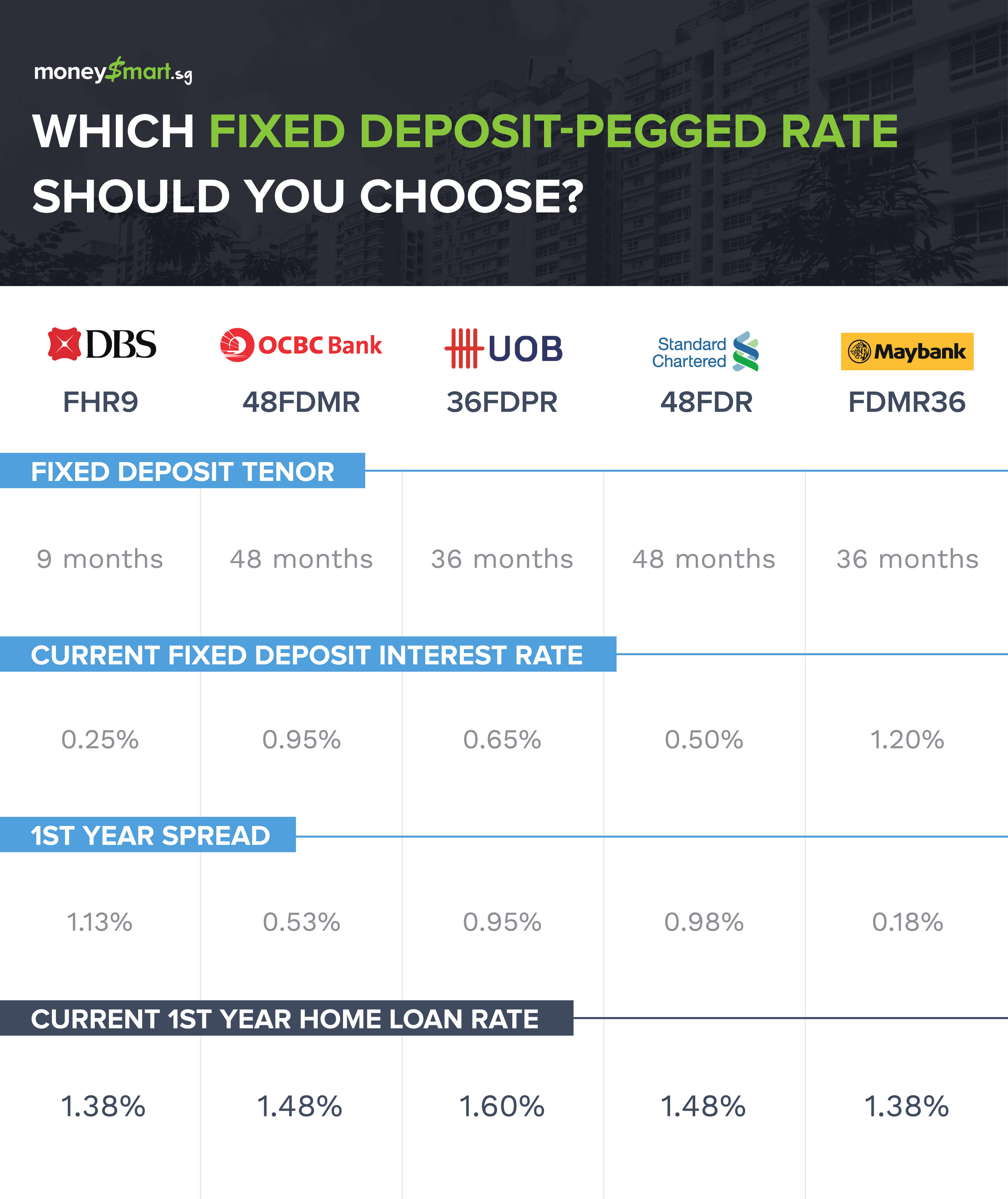 What does this table tell us?

There are two main observations one can make from this:

It looks like iLoan was a better name – FHR, FDMR, FDPR all sound like remnants of the former Soviet Union. And FDR were the initials of the US president during World War II. Banks be taking this price war way too literally.

1. Fixed deposit interest rates are controlled by the bank

The good news is that fixed deposit interest rates represent a cost to a bank. So presumably local banks, which have larger deposit volumes compared to foreign banks, will be less willing to adjust their rates in either direction.

That said, you have to wonder why DBS is the only bank that chooses a shorter fixed deposit tenure – is it to make their package look more appealing because the interest rate is lower? Because it ultimately doesn’t matter once you consider the spread. Which brings me to my second point.

2. Compare rates in its entirety – with the spread included.

You’ll quickly notice that banks are using the spread to stay competitive. Maybank may have the highest fixed deposit interest rate right now, but have adjusted their spread so that they’re not offering the highest overall interest rate for home loans. In fact, they’re tied for lowest interest rate.

On the other hand, despite DBS’s high first year spread, it is also tied for lowest interest rate.

3. Look out for the “thereafter spread” too!

Because of the presence of lock-in periods and the option to refinance and reprice, we didn’t include how the home loan packages’ interest rates change after the first year. But this is definitely something you should keep in mind.

Some banks, like OCBC, offer a throughout rate. This means that the spread will not change. It will remain at 48FDMR + 0.53% regardless of how many years it’s been.

As you can see, you’ll most likely be paying higher interest rates with each new year. Assuming FDMR36 remains at its current rate of 1.20%, you could be paying 1.80% by the fourth year thereafter.

This means there’s a high likelihood you’ll want to refinance after the 3 year lock-in period ends. While our mortgage brokers try to make refinancing home loans as convenient as possible for you, you may still consider it a hassle, especially if it ends up costing you more to switch banks.

It’s fair to say that intense competition between banks will focus on home loan packages that can be easily manipulated. With the SIBOR slowly (but surely) rising, I imagine that fixed deposit pegged home loans will prove to more popular both for home buyers as well as banks hoping to claim a larger share of the market.

But as we said earlier, this innovation is giving much more power to the banks to adjust their interest rates unilaterally. And while raising fixed deposit interest rates currently represent a cost to the bank, the fact remains that they can pull the trigger when it’s convenient for them.

Still confused about fixed deposit-pegged home loans? MoneySmart’s Mortgage Specialists can help you out. Head on over to our Home Loans Singapore page to get started.

Home Loans
HDB Loan vs Bank Loan – 3 Ways to Decide Which is Best for You
Sign up for our newsletter for financial tips, tricks and exclusive information that can be personalised to your preferences!