Think “retiree” and you get images of some old guy in a Hawaiian shirt, pina colada in hand, lounging in a Bali resort. This guy lives in the lap of luxury, having earned big bucks in his youth. Well, it’s no surprise that you don’t see too many of these guys walking around in Singapore, since they’re usually safely ensconced in their Ferraris.

The reality is that many people spend the better part of their lives working, some clocking such long hours that they come home  one day only to realise their children are grown up and have left. Others have such unrealistic expectations of the lives of luxury they hope to live in old age that they never quite achieve their retirement savings goals. Then there are the many people who live profligate lives in their youth, only to have to struggle to play catch up when they realise they’re never going to be able to afford to retire.

Are you doomed to play out one of the scenarios above? Not necessarily. Here are some alternative retirement models that you might want to consider.

1. Save up your nest egg early on, then take it easy

Now, one might wonder just how it could be possible to build up your nest egg early when you’re a struggling young employee. Well, thanks to the power of compounding interest, if you invest your money as early as possible, you have to save and invest much less than someone else who starts 10 or 20 years later.

If you don’t believe us, just check out this chart. 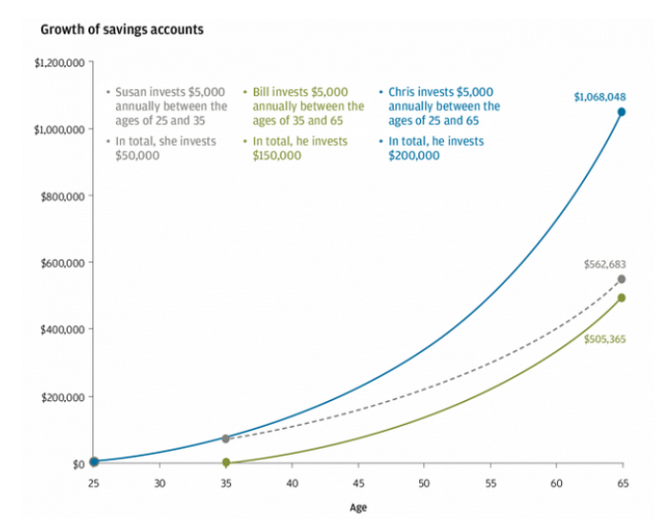 In fact, if you manage to build up a sufficient nest egg early on, you might be able to save yourself from the necessity of even having to save any money later on. Sure, you might still save because you never know when it might come in handy. But your future survival will no longer be dependent on it.

Would you prefer to spend tons of money when you’re young and then have to slave away when you’re older, or save as much as you can in your youth and then have the peace of mind to know that you need to earn only enough to survive, since you’re already sitting on a healthy nest egg?

In fact, the happiest middle people I know in their 40s and 50s are those who have the time and energy to exercise and spend time with their friends and loved ones. They’re not necessarily rich, but they’ve definitely gotten their finances under control.

If your idea of retirement is sipping champagne every evening in the company of nymphs a quarter your age, you’re going to have to work pretty damn hard to realise the dream, and unless you’re a relatively high earner, you might be a little more decrepit than you might like to admit when you reach that point.

That’s why some people choose to semi-retire early on, but without completely cutting off their various sources of income. This isn’t for everyone, but many of my friends’ parents who’ve taken this path are enjoying the greater balance that they enjoy in life.

Instead of working until the age of 65, you might choose to retire 15 years earlier and work part-time to save yourself from having to dip into your retirement fund until much later. You might not have enjoyed the years of toil in the rat race when you were younger, but when you’re working on a part-time basis things start to look quite different.

In fact, many older professionals in my previous jobs continued to work as consultants instead of retiring completely, coming in a few times as a week or just in the mornings. In exchange, they not only enjoyed greater financial security but were probably the least stressed-out people in the entire office.

3. Extend your money-making years in the form of passive income or a business

For many people, the reason they hate the idea of not being able to retire is not the fact that they really want to cease all economic activity when they’re older, but rather than they don’t like their jobs and don’t want to have to squeeze with other tired office workers on the MRT every day for the rest of their lives.

On the other hand, speak to someone who makes their money in the form of business profits and there’s a higher chance they’ll tell you they don’t have any plans for retirement.

If you’re passionate about starting a business or generating passive income, the time to start making plans is now, because some guardian angel isn’t going to float down from the sky and do everything for you once you hit 67. If you’re in your 20s, 30s or 40s, you still have some way to go before you call it a day.

Invest the next few years in serious efforts and you could very well see yourself quitting your day job and devoting the rest of your economically active years to reaping the benefits.

What sort of retirement do you envision? Tell us in the comments!

Budgeting
Compare 9 Best Electricity Price Plans: Open Electricity Market (2022)
Sign up for our newsletter for financial tips, tricks and exclusive information that can be personalised to your preferences!