In Singapore, there are three types of taxes: progressive, regressive and the aggressive. Okay, I made up that last one. That’s what I’ve named the GST hikes after the way Singaporeans use it to threaten one another. Naturally, with Election season on us again, the question of tax has returned.

Whenever a new policy is being proposed by a political party, the most obvious criticism in response is “Where are you going to get the money to do it?” There will be strong (and sometimes direct!) hints that such policy changes can only be funded through higher taxes – because no one likes to hear about high taxes. There even appears to be somewhat of an avoidance in talking about taxes when it comes to policy implementation, as if a further increase in taxes will send Singapore’s income tax rate through the roof.

But are Singapore’s taxes really high? And how do we compare to the rest of the world?

I’ve not had to really think about my taxes for some time… what’s Singapore’s tax rate now?

Singapore uses what is known as a progressive income tax rate. That means that those who earn more, get taxed a higher percentage of their income. In Singapore, this means those who earn more than $320,000 a year will be taxed the most, as a percentage of their income, almost 20%. This year’s Budget announced that the tax rate is set to increase in 2017. Only those earning more than $160,000 a year will be affected by this hike.

Of course, income tax alone doesn’t show a complete picture of tax in Singapore – we do have the earlier-mentioned Goods and Services Tax, or GST, which is currently at 7%. We also have other “taxes”, like CPF, which is also set aside from your income.

But for the purposes of simplicity, let’s just look at Singapore’s income tax rate on its own.

How is Singapore’s tax rate calculated?

At this point in time, this is how income tax works in Singapore. These rates are applicable to Residents only – non-residents have a different set of tax rules which sees them currently paying between 15% and 20% of their income.

Who qualifies as a resident? Singapore Citizens and PRs who spend most of the year in Singapore and Foreigners who have stayed in Singapore for 183 days or more in the previous year.

So as you can see, the higher your income is, the higher the percentage you pay in tax. But even earning an average of $10,000 a month, your tax rate is no more than 6.6%. In fact, it could even be less.

But wait, there are tax rebates as well!

In addition to tax rebates, which are determined by the government, there are several ways to lower your taxable income too. Many of these are within your power.

How does Singapore’s tax rates compare to the rest of the world?

In fact, even closer to home, our tax rate is far below that of countries like Thailand, Taiwan, South Korea, Japan, India and the Philippines. Just take a look at this table from EY’s analysis of the 2015 Budget. 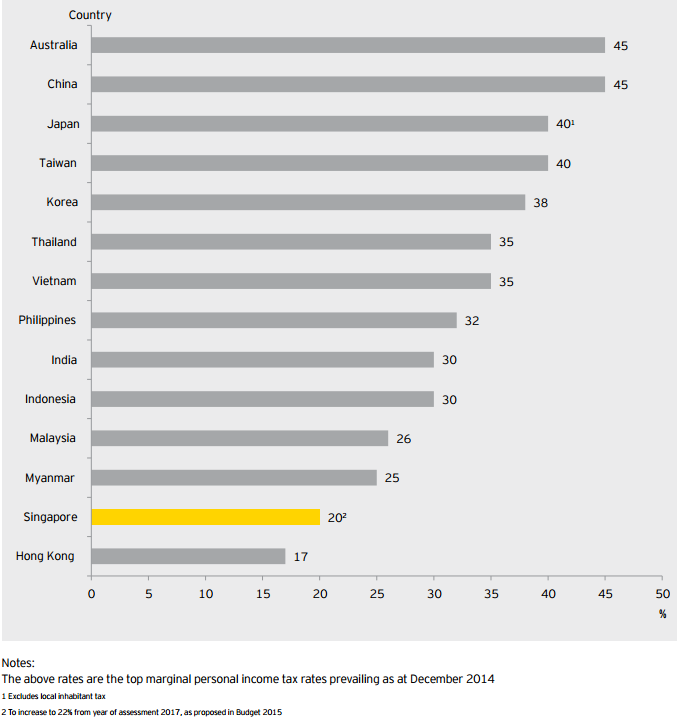 But just in case you think it only happens in countries which are known for their democratic practices and welfare systems, China also sets a maximum tax rate of 45% for those earning more than 80,000 RMB in a year.

Of course, one cannot look at the income tax rates alone. You have to see how much tax rebates you may be eligible for as well. For example, in Belgium, when considering median salaries, someone who isn’t married and has no children can expect to pay as much as 42.8% of the income in tax, while married couples with two children only pay 31.8%.

Do you still feel Singapore’s taxes are high? Can they afford to be raised if it means more protection for the less privileged? Let us know your thoughts.