Let’s face it. No one watches any other channel on mioTV apart from the soccer channel. Back in the day when we all had no choice but to sign up for mioTV just to keep watching the Barclay’s Premier League, the other range of channels offered to customers were a good halftime joke. “Hey look, they’re advertising another channel that I totally don’t even care about.” Well, as we found out, things have gotten even worse.

If we had to go into detail as to how much SingTel has messed with our soccer-viewing lives, we could probably publish an entire to book that would rival the sales of Sir Alex Ferguson’s new biography. So we’ll try a quick summary:

First of all, having to sign up with a completely new cable provider just for soccer was irritating enough.

Then there was the World Cup. The subscription prices caused such a furore, it even ended up on international newswires such as Bloomberg, and resulted in online protests numbering in the thousands.

Several other equally enjoyable events followed: the infamous service blackout on the most nail biting of season finales (and severe anguish for Manchester United fans. Don’t mess with those guys. They’re irrational enough with their choice of football clubs already); the subsequent removal of the FA Cup and Champions League from the original bundle. Let’s also not forget that the mioTV feed itself isn’t what one would describe as “reliable”. Oh did I mention we’re paying for this. 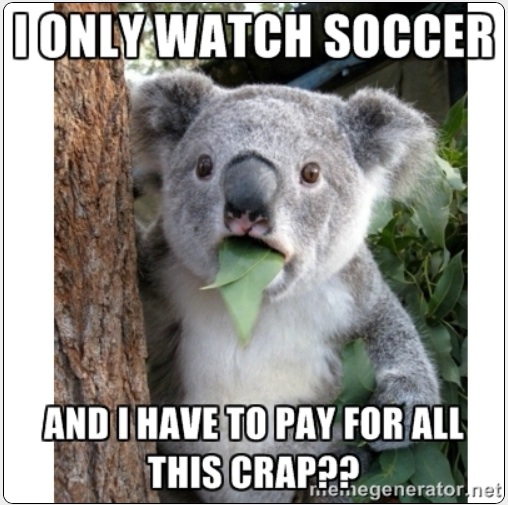 We received this photo from one of our readers showcasing mioTV’s brand new offering of its TV bundle. Have a read: 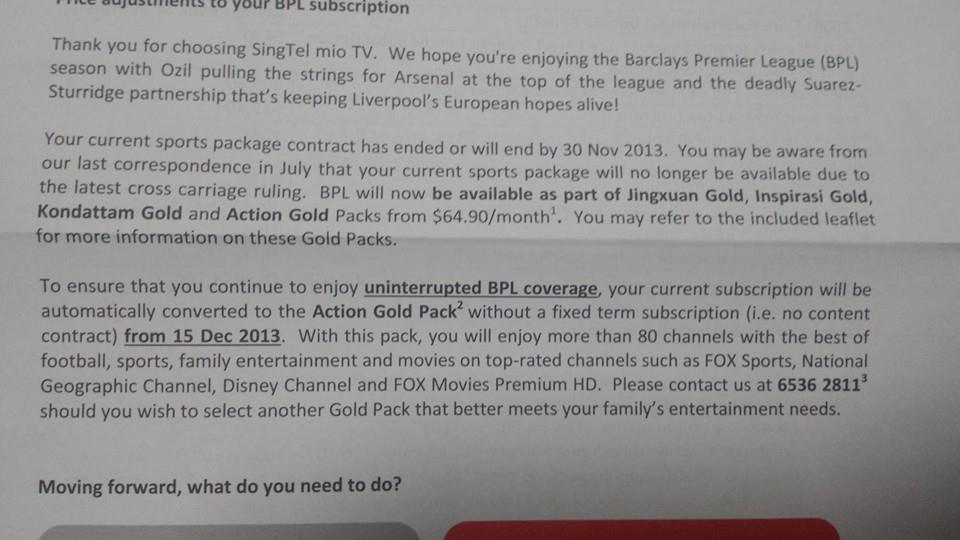 From what we know, this is almost double of what the old package cost. If those packs actually contained real gold, then…that may be worth some consideration.

“Dear SingTel, I’m not enjoying Ozil pulling whatever strings he’s pulling. I’m enjoying paying the price I’m paying for something that was forced on me. AND NOW YOU WANT ME TO PAY MORE?!”

A Lesson in Customer Retention

Our reader subsequently went to explore other options (yah ok we know there’s only one other option) and got a fantastic (sic) deal. This is by no means some advertisement to evoke a mass exodus but rather this:

We won’t stand for this kind of nonsensical arm-twisting and neither should you.

Our reader mentioned (in his own words) that he is now a “S*****b fan boy”. They did a calculation for him and with the new plan offered, he would save close to $300 compared to the old plan he was paying (before the price increase even) for both TV and Broadband subscription. And this was before all the other freebies were thrown in (which by this point, doesn’t really need to be mentioned).

Here’s the lesson: If there is no form of loyalty towards people who bit the bullet and signed up for your stupid package just because they had no choice, what makes you think they’re going to stay loyal when they actually do have a choice?

Have you been strong-armed into paying more for the same thing? We want to hear your thoughts here.

Invest
The “Great Lockdown Recession”: Is This a Good Time to Start Investing?

Career
Being A Sugar Baby in Singapore — How Much Money Can This Controversial “Job” Make?

Opinion
Should E-Scooters be Banned in Singapore? 5 Alternatives to an Outright Ban

Opinion
5 Reasons Why Eating at Food Courts in Singapore Makes You Broke
Sign up for our newsletter for financial tips, tricks and exclusive information that can be personalised to your preferences!