Providing For Parents in Singapore: Can We Give Enough?

Ever since my family perished on Krypton, I’ve had a soft spot for elderly parents. They aren’t who they used to be, because apparently time sucks. And while most Singaporeans would like their parents to kick back and relax, retirement’s sadly out of the question for many. Their children either don’t or can’t contribute enough. This article takes a closer look:

MoneySmart conducted a survey last month, exploring how much Singaporeans give to their parents. No crimes were committed during the survey, and the only human rights violated were mine. Here’s what we determined:

How Much Do Most People Give? Assuming an average income of $3500 (a degree holder), most parents are being supplemented by just $350 a month. That number seems fair as a percentage, but let’s put it in perspective:

What can $350 buy in Singapore? Assuming that a meal costs $3.50, that $350 will feed someone for a month, and leave a disposable income of $50. The average Secondary school student spends about $50 over a weekend. In terms of dollars and cents, 10% doesn’t cut it.

I spoke to a parent who asked to remain anonymous. She’s 64 this year, and is supported by her daughter:

“My daughter gives me $400 a month, which I know is good already. I know it’s very difficult for her. Of course I appreciate it, but $400 is really hard to live on. I think if I ask you to live on $400 a month, you will also feel the squeeze. You have to pinch every penny.

But even to give $400 a month is so difficult. If I can, I will still work. I think that, if we don’t work, our children will find it impossible to support us all the way. It’s not that our children don’t want to give enough; I think in Singapore, it’s so expensive they cannot afford it.”

But is that really true?

A Strain on Our Finances

Out of 27 people surveyed, 13 decided that providing for parents is a part of “easy mode”. It puts no strain on their finances. Coupled with the fact that most people provide 10%, this suggests we’re a bunch of ungrateful jerks. I resent that (I’m not ungrateful).

But Jocelyn Mok (a freelance HR consultant) practically stuck a fork in my face:

“Your question is too clear cut. It’s not a strain on my wallet now because my parents are still working. And they want to keep working. But if they ever stop, I’ll probably have to give them, say, 25%. And that will place a big strain on my wallet. So even though I’m not feeling any strain right now, if my parents were to retire, I’d definitely struggle.”

But Aaron Siew (a typesetter / layout artist) thinks we have more than enough to provide for parents:

“If you plan ahead, providing for your parents is not hard. I just set aside about $10,000, and put it into an investment plan. When it matures I’ll give it to my parents. I did that back in’02, and after that initial bit of pain, it’s not a problem.”

What if Our Parents Retire?

Here’s a quick look at how, at some 50 or 60 odd years of age, mum and dad are still kicking our collective butt at making money: 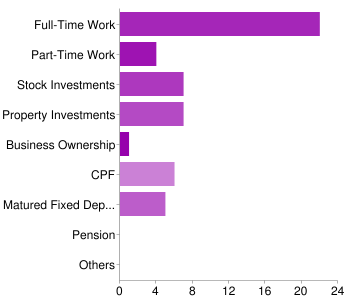 Notice that no one listed a pension, and practically everyone’s parents were still working full-time. I’m not sure whether to feel unreasonable patriotic pride at the Singapore spirit, or curl up and die of shame. As it turns out, most parents expect to literally work until they die. Because they think we can only afford that 10 %. I asked Mr. Siew, a private businessman supported by his two sons, about this:

“From day one when I started work, I already knew I would never stop working. Please lah, in Singapore who can afford to retire? The cost of living is so high, even for my children to give me that small amount is so painful for them. If I retire completely, then how? My children don’t need to get married and raise their own families?

In Singapore there’s no way to count on our children for support. Not to say they’re cruel or anything. It’s just a fact that, when everything’s so expensive, they can’t afford to support us.”

For retirees to maintain a comfortable standard of living, most agree they’d need about $1000 a month. Mr. Siew mentions that:

“My medication is already $140 a month. My meals are about $5 each. My transport, say $20 a month to top up my EZ Link. All in, my basic necessities are already $500 plus. If there’s going to be any luxuries at all, foot reflex or eating at restaurants, I will need at least double that.

But when my sons get married and have a family, I’m not going to demand $1000 a month from them what. How can they afford? So I don’t believe I can ever retire.”

Another respondent, who declined to be named, is an accountant for an IT firm. She openly admits that:

“With my salary, if my mum and dad stop working, I don’t know what I can do for them. I’m giving 30% already, and it’s always not enough. Every time I need to top up for their transport or their food. And now both of them are still working. If they quit, I honestly don’t know how I’m going to survive and provide for them. I have to say I definitely can’t give enough if they stop working.”

Which, unfortunately, speaks for many respondents. The strain is especially tough on single children; the thought of forking out an extra $1000 a month is staggering. When I asked if it could be a target amount, most interviewees looked like someone had fastened a nutcracker around their genitals.

It seems like, for most Singaporeans, we can support our parents for now. But if our parents lose their source of income, many of us will be overwhelmed by the cost of supporting them. Perhaps the best solution is the one used by Mr. Aaron Siew: Suffer an initial hit, and open a deposit that’s later given to parents. Do it a decade before their retirement, and you’ll have an easier time with your filial obligations.

Do you have plans to provide for your parents? Comment and let us know!