Income inequality measures how much richer the rich are, compared to the poor. It’s a polite term economists created, to replace: “Here’s how far the poor are from ramming sharp objects in your face”. And in Singapore, that distance seems to be…let’s see…oh okay. You all enjoy this infographic, while I book an emergency flight to Mali. 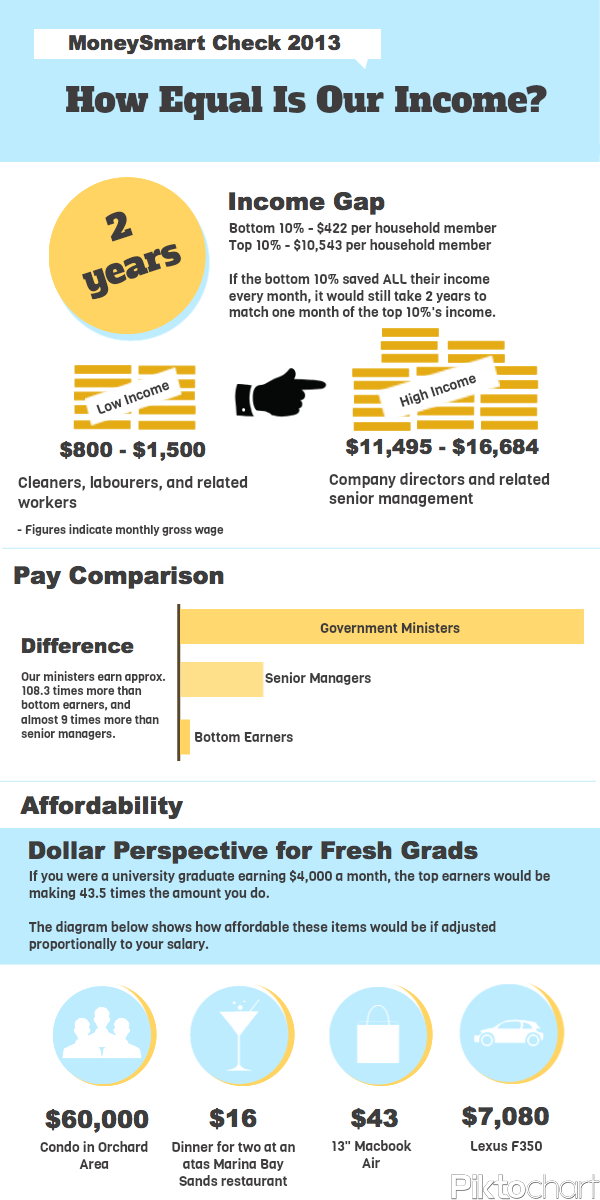 Overall, the top 10% of Singapore households had incomes of $10,543 per member. The bottom 10% had earnings of $422 per member. (You can see more figures from the Singapore Department of Statistics)

The disparity seems mostly related work qualifications. Unskilled Singaporeans can only sell their labour, but they can’t compete with mass imports of cheap foreign workers. So anyone who believes all Singaporeans “don’t want” blue collar jobs anyway…go tell that to these people.

Preferably from a distance, and with a good helmet on.

The low income group makes about $800 to $1,500 a month. Mind you, there are some who earn far less than that. Either they’re not on the record, or have variable incomes (e.g. odd job workers).

The middle income earners make between $3,500 to $5,500 a month. For more on this wide ranging group, you can look up the Ministry of Manpower’s reports on wages). You should probably do that anyway, to make sure you’re not getting ripped off.

The absolute top earners can be calculated from our Ministers’ incomes.

Ministers’ salaries are good for this, because they are pegged to the 1,000 highest earners, minus 40%*. Why 40%? Because it exemplifies the sacrifice required of political service. Imagine that: Having to drink lower grade Bird’s Nest, and have only one lunch in Paris a week.

Anyway, the typical Minister is paid around $124,558 per month (the Prime Minister gets about double that). Add on 40%, and it suggests our top earners are looking at figures of about $174,381 per month.

Due to the huge income divide, it can feel like we’re two different countries in one island. And I know when rich people talk, it sounds like a canary giving a goldfish pointers on flying.

But don’t let it get to you too much. Follow us on Facebook so we can help you make some money, and bring your friends along. The game may not be fair…but doesn’t mean you still can’t win.

How would you reduce income inequality? Comment and let us know!