Food Junction has merely 12 food courts, mostly in, well, “2nd choice” malls like Harbourfront Centre (instead of VivoCity) and Century Square (instead of Tampines Mall). In contrast, BreadTalk’s own Food Republic chain is an absolute beast.

This is by no means the first major food court acquisition in recent times. Just in Dec 2018, NTUC acquired the Kopitiam chain.

The fact that BreadTalk has gone to great lengths($80 million!) to acquire is Food Junction is going to surprise a significant chunk of Singaporeans, because many of us think that food courts are cheap.

These are the same folks who head straight to the food court for lunch and dinner, because it’s “the cheapest place to eat in the mall”.

Never mind that to get to the food court on L4, you have to pass through a whole string of cheap eateries in B1.

And that perfectly nice hawker centre just across the street? Let’s just pretend it doesn’t exist. After all, the food court has air con, and it’s “still very cheap what”.

But food courts are mysterious places where, all of a sudden, it’s perfectly okay to spend $10 on wanton mee (mostly mee with a few decorative slivers of “liao“) and a cup of chestnut-flavoured syrup-water.

Here are 5 reasons your food court habit might actually be making you broke.

1. Prices are badly displayed — you can’t compare across different stalls

If you go to a normal restaurant, the SOP is to sit down and look at the menu, which states the price of every item available. You can look at the list soberly and weigh the options against one another.

Even if it’s one of those 24-hour Spize-type places with 124,912 different things on the menu, you can compare across cuisines and decide whether you want to opt for the economical $3 thosai set or splurge on $12 fish & chips.

No food court would willingly display a consolidated price list of all its stalls’ offerings, so you are forced to shortlist the stalls under consideration and physically walk there.

Thanks to the often-crappy layouts of food courts, it’s often impossible, especially during a packed lunch hour, to compare the menus of more than 2 or 3 stalls.

That explains why the you sometimes find inexplicable queues for $6.50 cai png, while the more reasonably-priced $5 fish soup on the other side has no takers.

To research this article, I visited 5 food courts in town in an afternoon. Due to repeat exposure, I started noticing a few… interesting practices that you can find in most food courts.

First, you’ll find that some of the stalls try to make their offerings sound more fanciful than their hawker centre counterparts. For example, the noodle stall calls their dishes “handmade noodles” instead of “ban mian”, which is basically the same thing.

Another tactic is to reference “famous” eateries. $5.50 for a normal laksa may sound expensive, until you see that it’s “The Original Katong Laksa Since 1950s”! Suddenly it’s worth it. 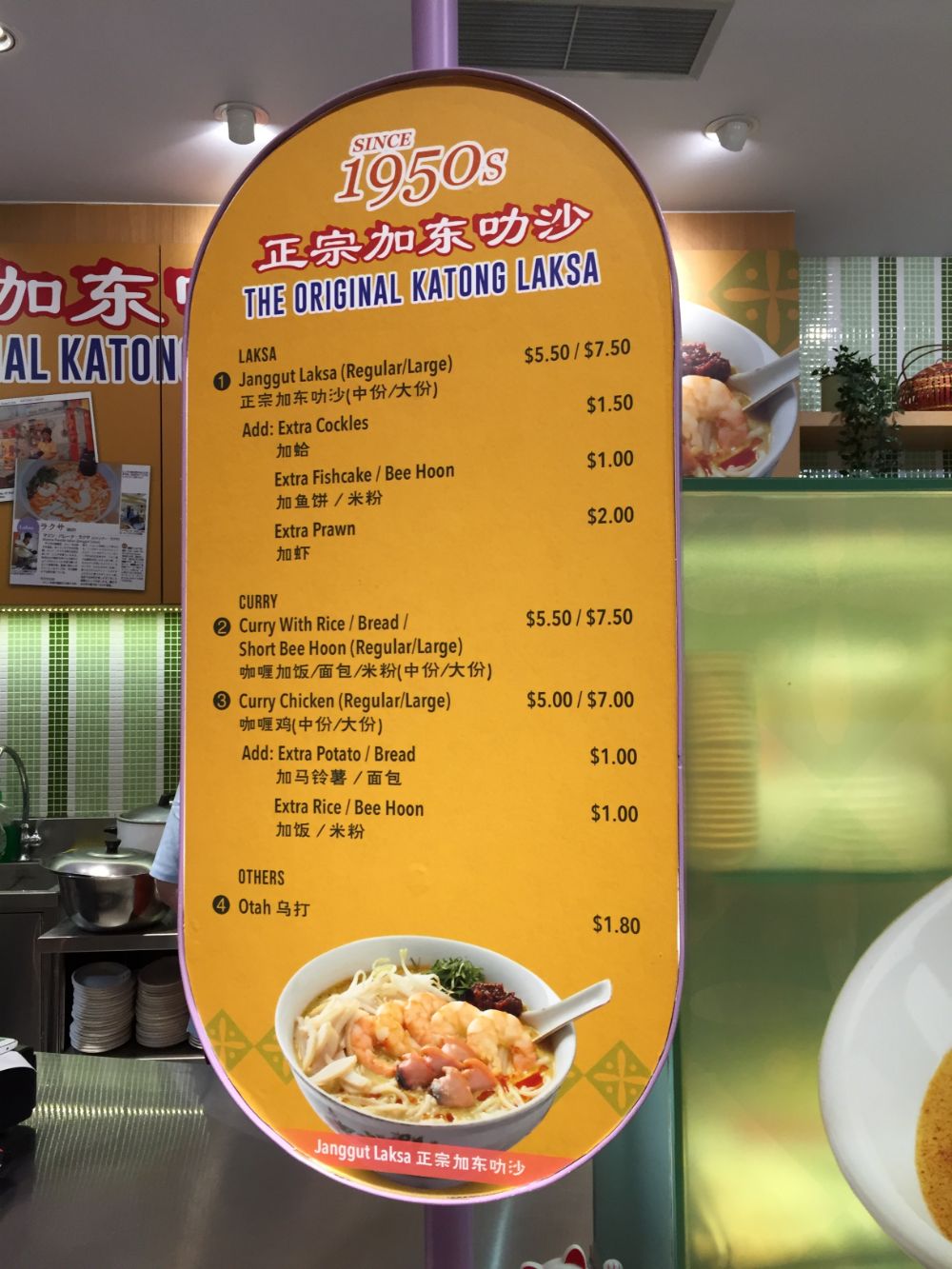 A final tactic that most would find familiar: Dress anything up you can with Japanese or Korean elements. For example, the “Japanese cai png” stall at Junction 8 can mark up their pre-cooked, gravy-laden dishes by at least 100%, simply by exploiting Singaporeans’ Japan fetish.

3. Stall vendors use the “YES?!” tactic to stress you into ordering before you’re ready

One of the main benefits of food courts is the wide variety of food stalls, but that’s, paradoxically, also a drawback.

Because food stall operators are afraid you’ll drift off to the next stall without ordering anything, you’ll often find yourself pressured to order before you have really made up your mind.

You’re likely to get dagger-like stares if you stare at the menu for too long, and perhaps someone might snap “Yes, what you want!?” at you.

If you’re easily stressed out by other people’s demands, you may end up ordering the wrong item in a hurry. Just look at this ridiculous menu — I’m pretty sure that more than 1 panicked customer has accidentally ordered the (obviously expensive) “special set meal promotion”.

While snapping at customers is also a commonplace practice at some hawker centres, the saving grace is that there’s usually at least 1 or 2 competitors for each type of food. The YTF stall owner may be rude and aggressive, but you can still satisfy your craving at his rival 2 stalls down.

4. Food is oversalted, requiring you to buy (incredibly expensive) drinks

Unless your tastebuds are completely ruined by a diet of Doritos, it shouldn’t come as news that most dishes at food courts are salty and MSG-laden as hell.

Well, there’s nothing too wrong with that, because this happens at hawker centres too. Most of us are pretty familiar with the infernal thirst that strikes after a satisfying plate of Hokkien mee or nasi padang.

At a hawker centre or kopitiam, a standard kopi or tea will set you back, what, $1 or $1.20? At a food court, though, you’ll have to cough up at least twice that to quench your thirst.

Based on my observations, food courts run by the BreadTalk empire (i.e. Food Republic) usually have a Toast Box in-house, so if you want kopi or teh, you have to come to their stall. Coffee here isn’t cheap, typically it starts at $2.

The drinks stalls at these food courts usually sell sugary nonsense like lychee juice, ice lemon tea, water chestnut and ice Milo, and these cost at least $2.50 a cup, typically. You can also opt for a “healthy” (not really) juice but that’s even more expensive, close to $4 a cup on average. 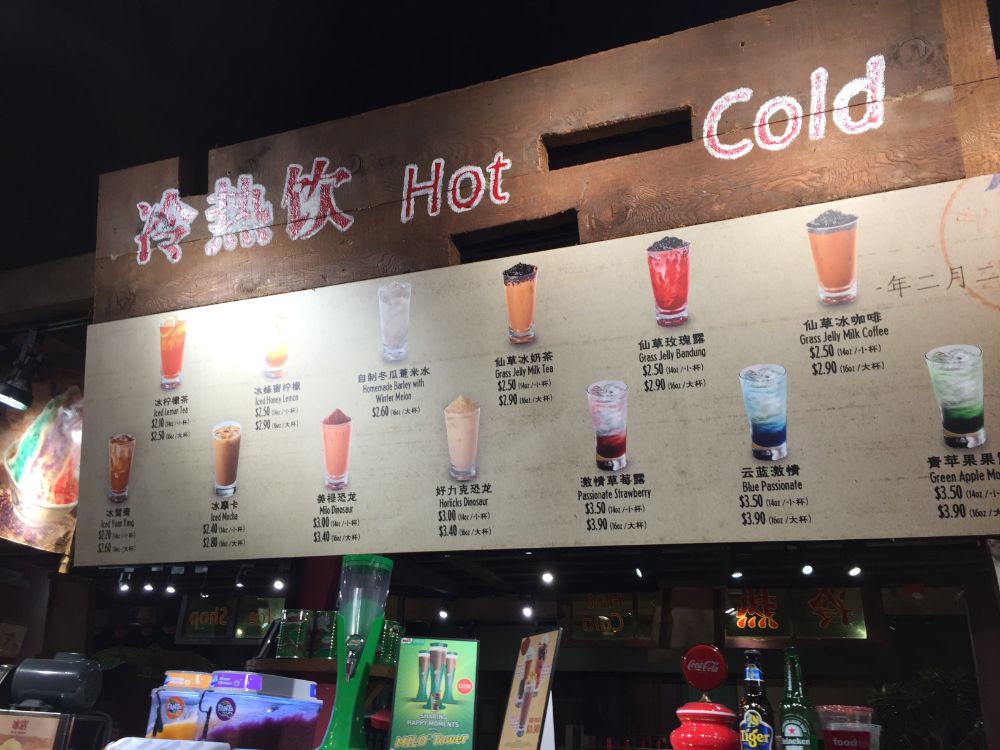 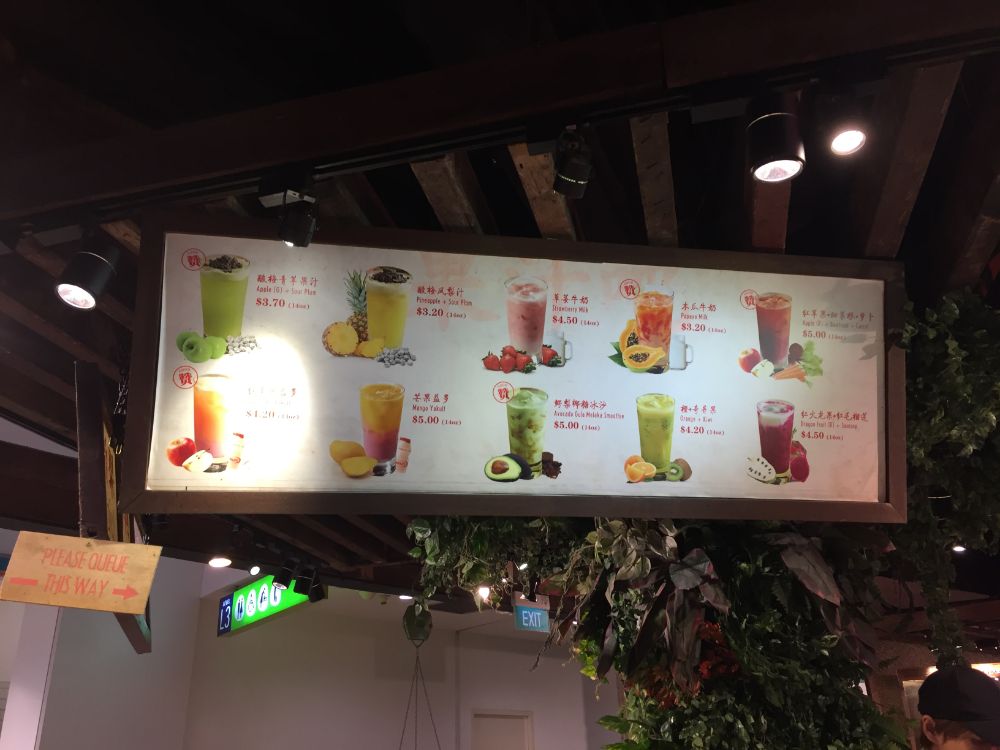 No wonder some food courts hire aunties and uncles to walk around pushing their drinks on customers. Must be lucrative…

In other words, the cost of your drink can quickly inflate your $6 noodles into a $9 meal. That’s enough for a meal at a fast-casual eatery like GreenDot or Hot Tomato.

And don’t get me started on the fruits…

5. After your meal, the shopping mall environment makes you spend even more

A final hidden cost of eating at the food court is that it forces you to walk through the shopping mall after your meal.

And, while walking past the Toast Box / Ya Kun / Gong Cha / Old Chang Kee / Polar Puff, someone in your gang of lunch buddies will inevitably get the brilliant idea of drinking coffee and tabao-ing more snacks or desserts for tea break.

Not only is this habit a one-way street to Pok Gai City, it’s also pretty damn unhealthy.

Worse, you walk past the Watsons and notice there’s yet another storewide sale, or you are irresistibly drawn to the We Bare Bears plushies at Miniso on the way to the MRT.

There’s a reason why mall operators love putting these stores in those no-choice-must-walk-past areas; they’re meant to tempt you with various unnecessary bullshit.

In contrast, there are fewer opportunities for impulse lunch break shopping at the hawker centre. At most you buy cable ties from the neighbourhood hardware shop or biscuits from the market lor.

Why do Singaporeans still have such a love affair with food courts?

My guess is that many Singaporeans still believe food courts are the cheapest food option in shopping malls, which was probably true at some point, like maybe back in the 90’s.

Some may be willing to concede that it’s cheaper to eat at, say, Encik Tan or Subway, but the food court will still cost less than $10, and that’s “cheap enough”.

Furthermore, the food court is the only place with the combination of air con + seating + food variety. Lunch time coincides with peak hot sweaty swampiness outdoors, so many Singaporeans simply cannot fathom going to a non-air-conditioned coffee shop for lunch, even if it’s cheaper.

There’s also the herd mentality prevalent in our office culture; Singaporean workers find it difficult to not have lunch with their colleagues, which leads to the need to dine at a place with multiple cuisine options.

But ultimately, I think most Singaporeans do know that food courts are expensive, unhealthy and generally horrible — it’s just that we rationalise our bad lunch decisions away.

For example, you pay $5 for a mediocre chicken rice at Food Republic, even though you can get a plate at $3 at nearby kopitiam. That’s actually a 70% markup! But you tell yourself it’s no big deal, because “aiyah, $2 difference only what, so convenient and got air con some more…”

Whatever you tell yourself, just know you’re making yourself poor (and BreadTalk filthy rich) with your food court habit.

Do you love or hate food courts? Tell us why in the comments!

Keto Diet in Singapore – How to Go LCHF on a Budget