Learn More
This Versus That

Grab vs Uber Part 2 – Now That There’s a REAL Price War Going On, Who Is The Cheapest?

The price war for private car hires continues as third-party private car apps Grab and Uber seem to be running out of ideas to outdo each other in providing cheaper and cheaper fares. Case in point, the price war took an interesting turn at the end of August when Uber announced that they would be moving to an upfront pricing model, similar to what Grab has always been doing.

In response, Grab shaved 15% off their fares (both the base fare and the per km fare). After all these strategies, you would expect Grab and Uber fares to get significantly lower – except they didn’t.

In fact, many customers believe that Uber’s prices have gotten higher in the days following their introduction of upfront pricing. Some have even reported that their usual Uber fares now cost more than double what it used to be!

On their part, Uber insists that nothing has changed, and that their upfront prices are based on existing data from commuters. Their claim is that prices are still dependent on the usual factors, like distance and time and the demand and supply that used to affect surge.

It seems obvious then, Grab should be cheaper, right?

Well, on paper, it is. The 15% reduction in fares means that GrabCar now operates with a base fare of $2.55 and a per kilometre rate of $0.68. Compared to UberX’s new upfront prices, which don’t seem to have any mathematical basis, GrabCar appears to have the upper hand.

However, since Grab’s demand surcharge is based on the demand-supply ratio in the area, the lower fares actually mean there’s a higher demand for GrabCars, thus driving the price back up. In cases like these, there is a possibility that UberX might actually be cheaper.

Let’s just look at several real-life scenarios collected over the past week.

Scenario 1: From Bedok to Fusionopolis at 9am

If you’re hoping to get an UberX or GrabCar in the morning to head across the island to your office, you’d be better off paying a doctor for an MC instead. Dynamic pricing at peak hours was indicated on both apps but I was still shocked to be quoted over $30 for my ride. Interestingly, at peak hours, it would seem that Uber is still the cheaper option. This could be due to several factors, including the demand-supply ratio in the area.

Just for curiosity’s sake, outside of peak hours, such a journey is expected to cost $18 by Grab. This is mathematically calculated using Grab’s distance-based fare mentioned earlier.

Winner: UberX, but you’re probably better off taking a taxi

Scenario 2: From Clarke Quay to Sengkang East at 2.15pm

An uncommon journey to be sure, but I wanted to see how the apps would fare in the middle of the afternoon. In this scenario, the prices were similar but there was a notable difference. Yes, in this case, Grab indicated higher fares, but quoted $18, which was still cheaper than Uber’s quote of $18.30 (which did not indicate higher fares)! (Yes, I realise I keyed in the Sengkang address differently – but the destinations are less than a kilometre from each other.)

Mathematically, Grab should have quoted a fare of $14 if dynamic pricing did not kick in.

Scenario 3: From One Raffles Place to Junction 8 at 4pm

Say you have a work function to attend at a popular shopping mall and have to head there from the office. How much should it cost you? If you guessed more than $20, you’d be right! 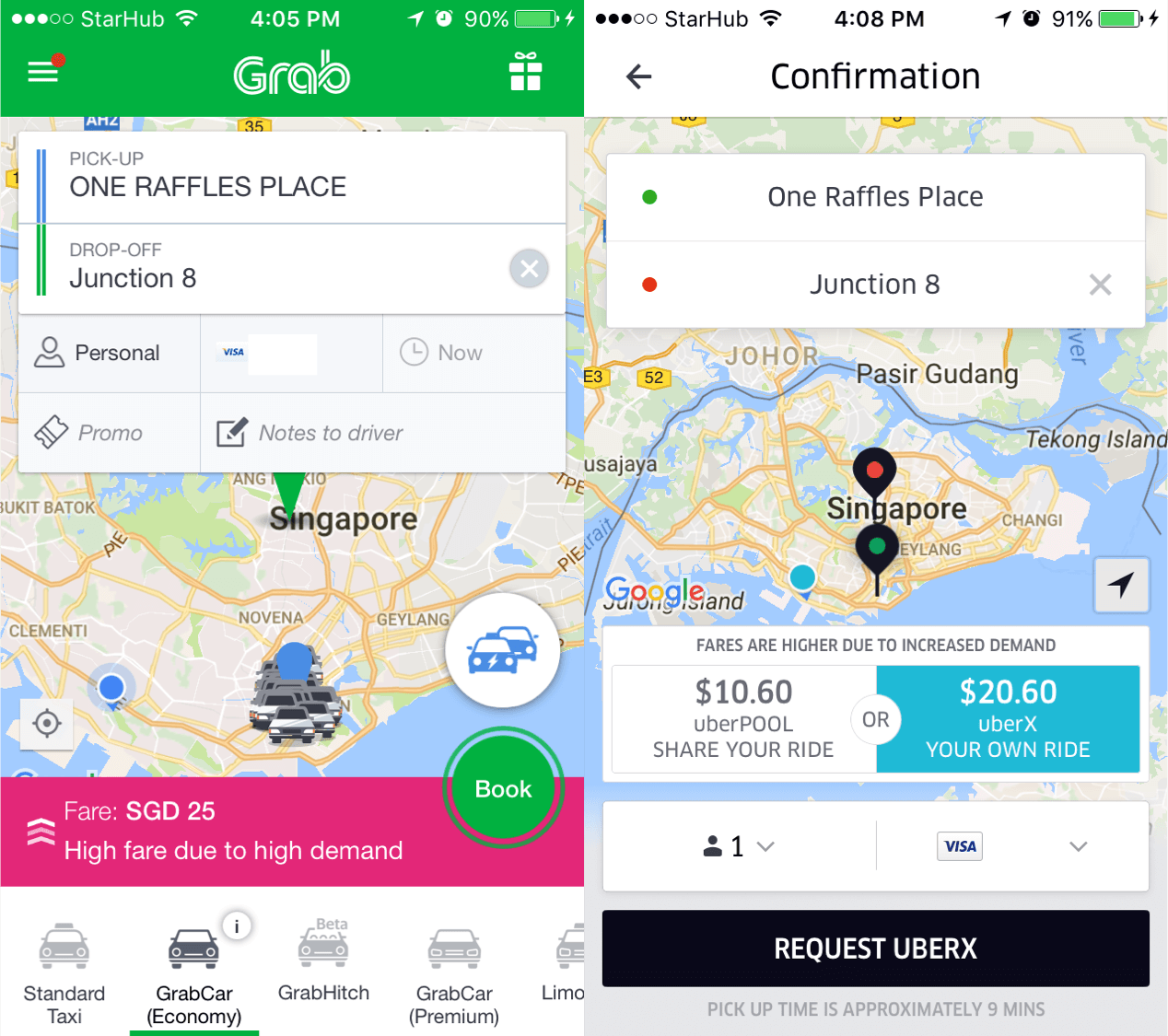 What is surprising is how wide the disparity is in this case, though! Despite higher fares for both apps, riding with UberX would save you more than $4.

Just for curiosity’s sake, outside of peak hours, such a journey should cost only $11 via Grab! Mathematically speaking, of course. I highly doubt UberX could compete with that price.

Winner: UberX, thanks to GrabCar’s higher fare during peak hours.

Scenario 4: From Fusionopolis to Bedok at 7.25pm

Heading home after work surprisingly gave me no peak hour higher fares. Despite it being the same distance as Scenario 1, the fare for UberX was higher than GrabCar this time around. 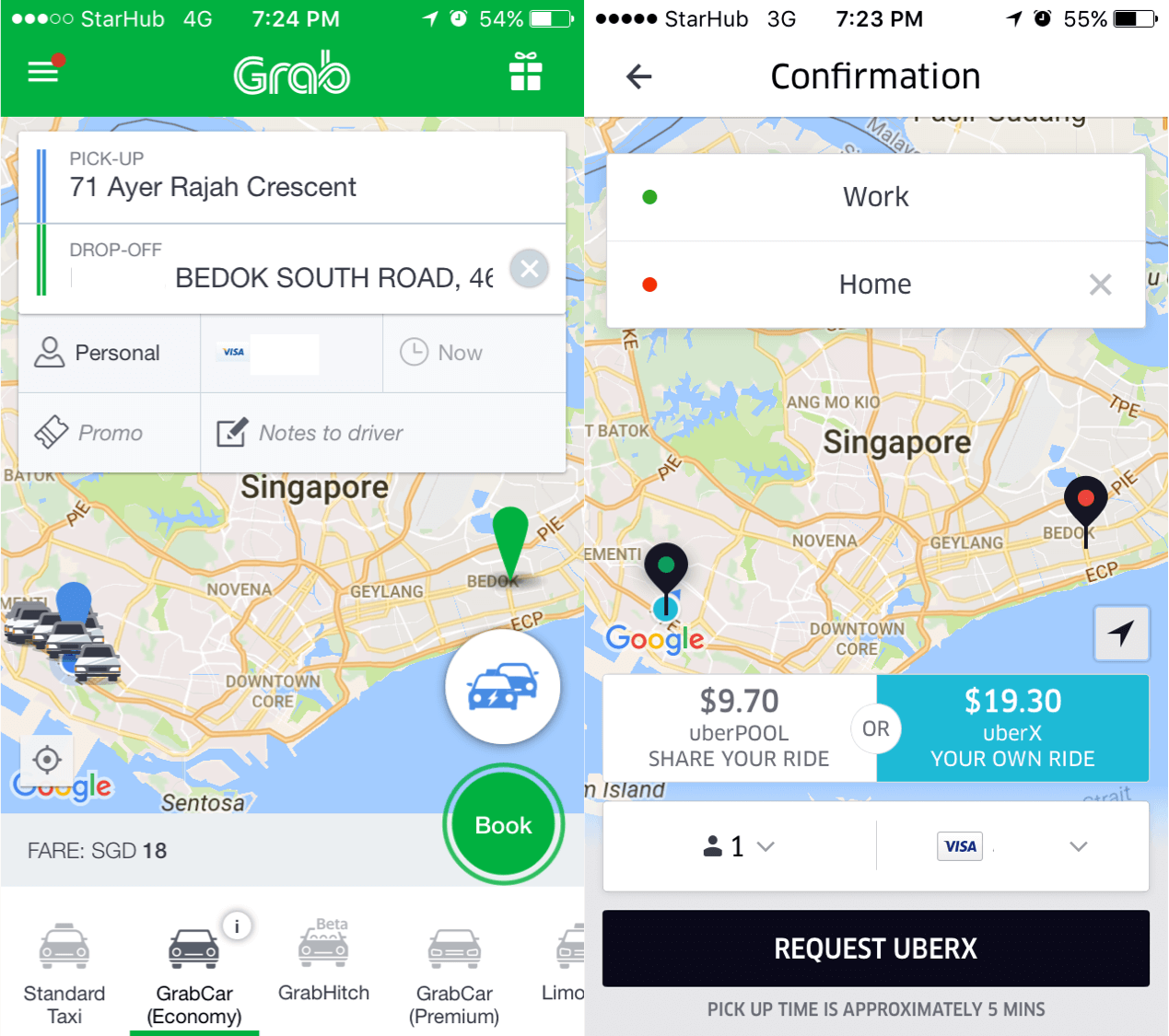 Now here’s what’s interesting about Scenario 4 for me. The UberX fare? It’s $1 higher than what UberX used to cost me in the past, before I started riding with UberPOOL. Does this mean that UberX is now more expensive? Nope. The very next evening, at about the same time, I was quoted $18.40 for the exact same journey. Yet, there’s no indication that this UberX $19.30 fare is “higher”.

What does this mean for us riders?

Clearly, there’s been a change in UberX’s pricing scheme. Since the introduction of upfront pricing, there is no longer a discernible mathematical way to guess how much an UberX ride will cost. In fact, just refreshing the Uber app a couple of times in the same few minutes gave me slightly different fares (about 10 cents) for the same journey.

This means that, for UberX, the demand-supply ratio in the area is much more dynamic than before. It also means that while UberX will tell you when there are significantly higher fares, it will not inform you for higher fares that are less significant.

So that means we should ride with GrabCar right?

As the scenarios have shown, that’s not true either. GrabCar is not always the cheaper option, and when it is, it’s sometimes just barely so. What the change in UberX’s pricing model essentially means is that riders now have to check both apps (multiple times) before determining what their cheapest fare is.

In other words, the way we approach private car hires have to be similar to the way we buy airline tickets. If UberX insists on continuing this upfront pricing model, we might soon be seeing independent apps (in the vein of Skyscanner) that allow riders to compare fares from both apps before booking.

What do you feel about UberX’s new pricing model? Share your thoughts with us.

Tags: This Versus That
Popular Articles
01

Shopping
NTUC Plus vs PAssion Card vs LiveUp vs Amazon Prime — Which Loyalty Programme is Best?

This Versus That
How Much Cheaper Is It To Own A Motorcycle Than A Car in Singapore?

Shopping
Pokemon Center Singapore Price Guide — Nope, Not Everything Is Cheaper In Japan!

This Versus That
Can You Actually Save Money with a Grab Subscription? Review of GrabClub & Score
Sign up for our newsletter for financial tips, tricks and exclusive information that can be personalised to your preferences!