It’s no surprise that cost is often a key concern of tourists to Singapore, especially those who have been travelling in more affordable neighbouring countries.

While you might have relied on tuk tuks or motorbike taxis in neighbouring destinations, in Singapore these modes of transportation are unavailable, and taxis are a lot more expensive so you might not want to use them all the time. Fortunately, there’s a buffet of transport options for tourists at all budgets.

However, some do require a bit of know-how before you start using them. Not to worry, this guide will have you zipping about the island like a pro.

What transport options are there in Singapore?

Here are the various transport options tourists on holiday in Singapore can use.

The MRT is one of the more efficient ways to get around town as it is fast and is not affected by traffic jams. Fares are also relatively cheap, considering the cost of living.

MRT stations are also within walking distance of virtually all the tourist sights in the city centre, including Marina Bay, Chinatown, Little India, Kampong Glam and Orchard Road.

However, the MRT network is not as dense as the metro network in, say, London, Paris or Tokyo. That means that to get to certain destinations such as the Zoo or Bird Park which are far from the city core, you will need to get off the MRT network and take a bus, taxi or other mode of transport to your final destination. 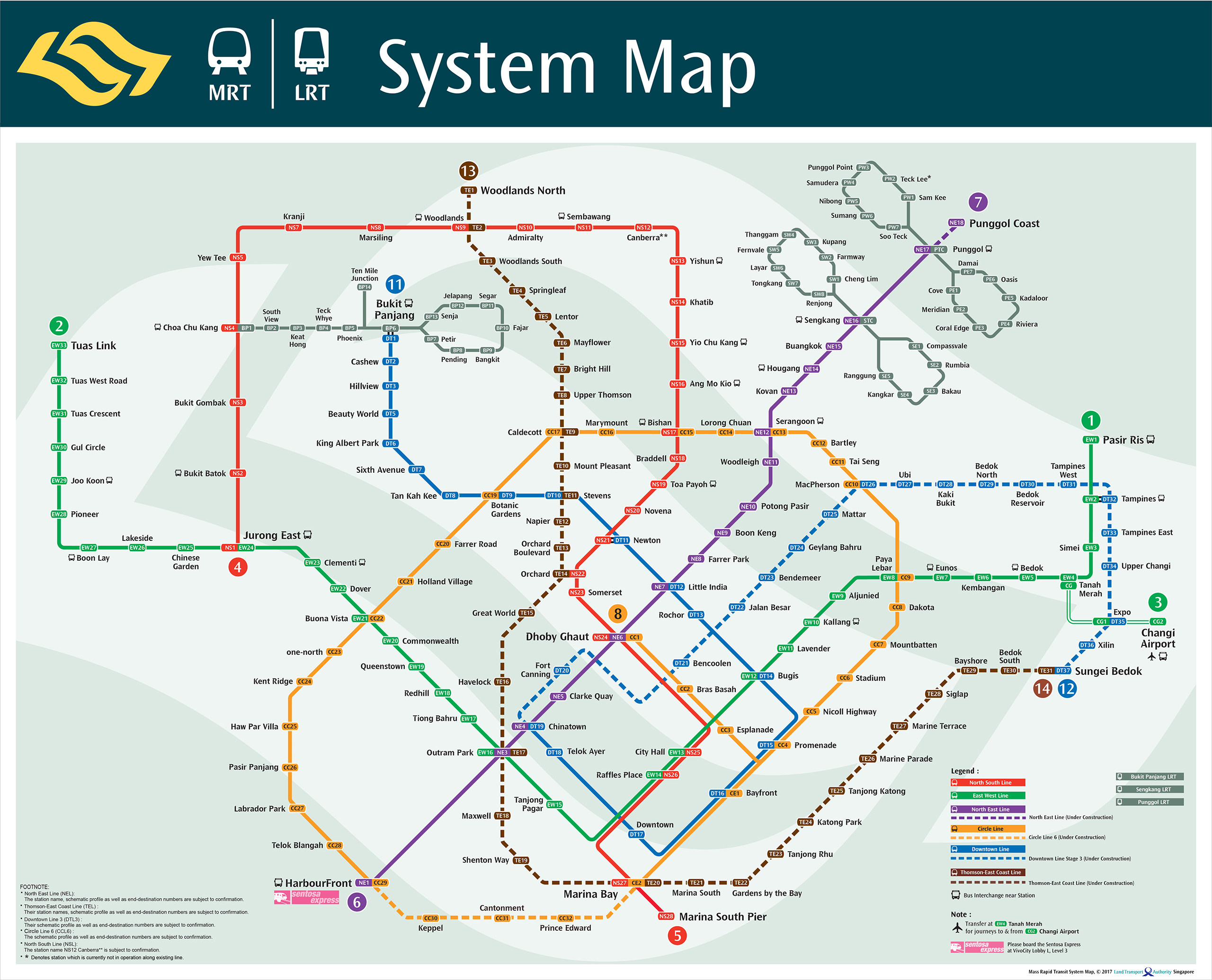 As a tourist, these are the stations you’re most likely to be using:

There are three ticketing options to choose from:

When you buy an EZ-Link card or Singapore Tourist Pass at the control station or ticketing offices at MRT stations, you are usually required to pay in cash.

Only got a credit card? You can pay by card if you purchase your EZ-Link card at a 7-11 outlet or your Singapore Tourist Pass at a Changi Recommends counter at Changi Airport.

To buy single-use tickets or re-load your EZ-Link card at the ticketing and top-up machines at most MRT stations, you can pay using cash, credit or debit card.

Once you’ve got your card, you simply tap in and out at the gantries to enter and exit MRT stations.

Where can you buy the Singapore Tourist Pass?

How much does the Singapore Tourist Pass cost?

The cost of the Singapore Tourist Pass is as follows:

Fares for a single MRT ride range from$0.83 to $2.08. If you have to make a transfer to a bus or the LRT, your maximum fare will still be $2.02 as fares are calculated based on distance regardless of mode of transport.

Here are some sample MRT fares.

Guide on using buses in Singapore

Singaporeans tend to rely on buses to take them to and from MRT stations whenever their starting points or destinations are not within walking distance of a station.

Bus stops are always sheltered and clearly marked with the numbers of the available bus services. In addition, there are large bus interchanges at some MRT stations which serve as a terminus.

Buses cover pretty much all of Singapore, including areas that are not well-served by the MRT. As a tourist, most of the main areas can be reached via MRT. However, you might need to rely on buses or another mode of transport to get to the following places:

To take buses, you can pay in the following ways.

Prepare coins, preferably in exact change, if you wish to pay on board. The bus drivers would not carry change.

Otherwise, the EZ-Link and Singapore Tourist Pass payment options have already been discussed above.

Every bus stop contains info about each bus route it is on, including the list of stops, first and last bus timing and fares.

Bus fares, like MRT fares, range from $0.83 to $2.08. You will be charged roughly the same amount when you travel by bus as you would if you were travelling the same distance by MRT despite the fact that bus travel is much slower.

Here are some sample distances and their corresponding bus fares (assuming your entire journey is made by bus).

Do note that these fares apply only to regular bus routes. There are also Express bus routes (mostly serving office workers travelling to the city centre from the suburbs and back during rush hour) and Night Rider buses (running from the city centre to the suburbs after midnight on Fridays and Saturdays), both of which cost more.

The LRT connects seamlessly to the MRT network, and travels to destinations in the following residential suburban areas:

There is little of touristic interest in these three neighbourhoods, so tourists generally do not have end up taking the LRT.

Ticketing works in exactly the same manner as for the MRT (see above), so you can continue to use the following:

Here are some sample LRT fares.

Guide to using taxis in Singapore

Going back to your accommodation at 4am after a crazy night of partying? Or don’t want to have to take the MRT with a huge suitcase in tow?

If you don’t have a smartphone with an internet connection, you will probably have to take a taxi.

Taxis in Singapore can be conveniently flagged down on the street, or queued for at a taxi stand in certain places. You can easily identify taxis from the signs on their roofs. When these light up in green, it means the taxis are free to accept passengers. There is usually a taxi stand in front of major hotels and at major shopping malls.

Sometimes, taxis can be in short supply, such as during rush hour, during a downpour or in the half-hour before late night surcharge kicks in at midnight. In such cases, you might have to order a taxi by an app like ComfortDelGro Booking App or Grab.

Taxis are technically supposed to take you anywhere you want, except into Malaysia. In practice, some drivers might reject you if you’re going to a location that’s not convenient for them or if they’re on their way home.

Here are the taxi operators in Singapore and the number to dial when booking a cab.

How to pay for taxis in Singapore

Basic taxi fares are not that expensive compared to those in the likes of London or Tokyo. But there are many surcharges which can really add up.

While different taxi companies might have slightly different ways of calculating fares, they’re all about the same.

Here are the fares being charged by ComfortDelGro, the biggest player in the taxi market.

Note that these fares only apply to their regular taxis (Hyundai Sonata). Unless you need the extra space, avoid hailing the big hatchback taxis or the limousine cabs, as you’ll be charged more.

If you book a regular cab using the ComfortDelGro Taxing Booking app, you’ll be charged a flat fare calculated in advance based on the distance and estimated waiting time. You’ll also be charged $5 for every additional stop you have the driver make en route to your final destination, and for every change in destination for every 5km thereafter. You may also have to pay additional charges at the end of your trip if the taxi goes under ERP gantries, which are basically electronic toll booths.

Do the fares above not sound too expensive? Well, they are, BEFORE the following surcharges are added to your fare.

Here are some estimated taxi fares at 3pm, when there is no Peak Period or Late Night surcharge, and ERP charges are either low or not applicable.

Right now, Grab is the only available ride hailing mobile app, as Uber has been acquired by them. If you have purchased a SIM card with data or are able to connect to wifi, you’ll be able to use Grab.

There are other ride hailing apps in the works, including Ryde and Go Car, but they have not been launched yet.

While Grab also lets you book taxis, the Grab app offers three main options when it comes to ride sharing:

Like taxis, you can use Grab to travel anywhere in Singapore. Just indicate your destination on the app and the system will search for drivers close to you.

How to pay for Grab in Singapore

There are three ways you can pay:

Grab fares are subject to surge pricing. That means how much you pay also depends on how many other people are trying to get a ride at the same time, and how many Grab drivers are available.

For instance, if you’re going home at 3am, it is always, always cheaper to take Grab back to your accommodation rather than pay the 50% midnight surcharge levied by taxis.

Tip: If you’ve got an internet connection and always want to know whether Grab or flag-down taxis would be cheaper at any given moment, check the price of Grab rides using the Grab app, and then compare them with the estimated price of taxis using this taxi fare calculator. Do note, however, that you’ll need to pay booking fees in addition to the estimated fare should you decide to book a taxi by phone or mobile app.

Are you visiting Singapore soon? Leave your questions in the comments!

6 Ways to Reduce Your Reliance on the Ailing MRT System

6 Things All Budget Travellers Should Take on Their Trips

3 Ways to Spend Less on Public Transport in Singapore