Thanks to BTS and all those latest idol K-dramas, Korea is probably the hottest holiday destination amongst young Singaporeans these days. Virtually every secondary school or JC/poly kid I know (bearing in mind that I don’t really run in those circles these days…) is obsessed with the latest nubile young Korean stars, which makes a trip to Seoul high on the list of Singaporean travellers.

It’s a good thing the South Korean capital really isn’t that expensive to visit. We break down the cost of a budget trip.

All prices are in SGD unless otherwise stated.

Budget for a 7D6N Seoul trip (from Singapore)

Return airfare from Singapore to Seoul

The key to finding cheap flights to Korea is to watch Kayak and Skyscanner like a hawk and then snap up tickets when they fall below a certain price.

If you do your homework, you should not have to pay more than $500+. Don’t assume budget airlines are always the cheapest, as there are sometimes sweet deals on airlines like Cathay Pacific or Malaysia Airlines.

Just take care to avoid the school holiday season in June and December, when thousands of Singaporean families flock to Seoul at the behest of their Kpop-obsessed kids.

Costs in Seoul are quite a bit lower than they are in Singapore on all counts—accommodation, food and entertainment.

If you’re on a budget but don’t want to share a hostel room with strangers, check into either a guesthouse or accommodation on Airbnb. You’ll pay about $50 to $60 for a basic twin room in a guesthouse, which works out to… not much per person.

On Airbnb, prices are similar, and you can rent an entire apartment for about $50 to $80.

This apartment in Myeongdong accommodates two for only $68 a night. There’s also this entire studio apartment near Hongdae for rent at $27 a night.  If you’re travelling solo, this room in a house close to the student-dominated Hongdae area is just $18 a night, while this one is $38 a night.

If you’re travelling with a companion, you’ll find numerous options that can keep your budget to $34 per person or less.

Seoul’s Metro system is well-connected, fast and cheap. You also get the added bonus of being surrounded by K-pop star lookalikes. Get an ezlink-like T-money card at the station as it will lower the cost of your rides.

The 10-stop, 47 minute-long ride from Incheon Airport to Seoul Station costs 4,150 won ($4.80), but once you’re in the city you’ll probably be travelling much shorter and cheaper distances.

The sorts of sights you’ll be hitting up in Seoul really depend on your interests. If you’re a shopaholic, you’ll be spending most of your time at Myeongdong or the markets at Hongdae and Dongdaemun.

If you’re a Kpop freak, you’ll probably be happy just stalking stars at the headquarters of the big entertainment companies like SM, JYP, YG and SM Town, or hanging out in the K-pop themed cafes.

And if you’re just the hapless friend or family member of a Korea-crazy Singaporean who’s being dragged along for the ride, go hit up some museums and palaces, or just pig out at a Korean BBQ joint.

Here’s how much some of the main attractions in Seoul cost:

Note that if you’re going to be carting back a suitcase-full of Face Shop masks, you probably want to raise your budget a little.

Cost: $100 to keep yourself entertained for a week 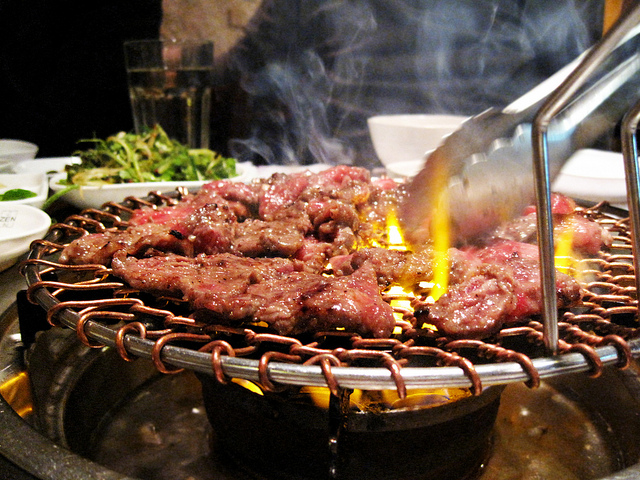 Even if you cannot name a single member of Girls’ Generation, if the thought of eating kimchi every day makes you smile rather than cringe, your trip to Seoul will not have been in vain. Virtually every meal you can order in Korea, no matter how modest, will come with kimchi and, often, a selection of side dishes.

Meat fans will have to refrain from hitting up Korean barbecue joints every single day. You get a big selection of side dishes and enough meat to fill even the biggest of stomaches for as little as 12,000 won ($14.30).

Cost: $200 a week (Assuming you eat a couple of times at proper restaurants)

Have you ever been to Seoul? Share your experiences in the comments!