When I tell Singaporean friends I’ve couchsurfed while travelling, they tend to wonder out loud why I’m willing to risk getting murdered in order to get free accommodation.

Seriously though, couchsurfing is generally safe if you use your common sense and do your homework by reading potential hosts’ profiles and reviews. It’s also a great way to really experience local life at your destination and, let’s face it, save a ton of money on accommodation while travelling.

It does take some practice before you get good at convincing people to host you, and let’s not lie, sleeping on a stranger’s couch is obviously a very different experience from booking into a hotel where you’re waited on hand and foot.

Some of you might find it an awful way to travel and prefer to spend money on an Airbnb or hotel room. For those of you, however, who are garang enough to try couchsurfing, here are a couple of tips.

One thing you’ll realise when you start couchsurfing is that in very popular tourist destinations, it’s a lot harder to find a host. In destinations like Paris or Tokyo, there are often a lot more surfers searching for hosts than there are people who can host them.

Conversely, in places that see fewer visitors such as smaller, non-touristic cities and towns, it’s often very easy to find a host, and you might even find yourself receiving multiple unsolicited invitations.

In addition, if you are a newbie and don’t have any references, it will be a lot harder to get a host at first. But once you get over that hurdle and get a good reference or two, things get a lot easier. Girls generally find it easier to get hosts than guys, because some female hosts prefer to only host women for safety reasons.

The culture of your destination also affects your ease of getting a host. For instance, Singapore is notorious for suffering from a lack of hosts, since most locals live with their parents and homes tend to be small and cramped.

All of this means that you should plan ahead and expect to send out multiple requests before you manage to get a host. If you’re travelling to a popular destination, you’d do well to start sending out requests a month or more in advance, and don’t be discouraged even if you have to send out tens of requests.

Many hosts also do not accept last minute requests, which makes sense since the world does not revolve around you, and people have their own lives and might already have made other plans.

As a couchsurfer, you should not expect to receive the same kind of luxury you would at the Hilton. You are sharing someone’s home, and most people do not live in mansions with butlers.

It’s always a good idea to check the location of your host’s home to make sure it’s close enough to the area you want to visit. There are many hosts who do not live in the city centre but far-flung suburbs or even the countryside, and if you aren’t renting your own set of wheels and there isn’t a good connection to the centre by public transport, you could find yourself in a jam.

To avoid surprises, you should also read your host’s description of his home so you know what sleeping arrangements will be like. While the most common sleeping arrangement will have you crashing the couch or a mattress, some hosts have a spare room, so lucky you.

On the other hand, there’s also a chance you’ll have to share a room with your host. This happens often in dense Asian cities like Tokyo or Hong Kong, where young people live in tiny studios. If that makes you uncomfortable, you’re better off staying with a different host or paying for a hotel room.

Be polite, show gratitude, and expect to accommodate your host, too

The couchsurfing community frowns upon surfers who think of couchsurfing just as a way to get free accommodation. But really, I think most people on couchsurfing know that one of the advantages (amongst the many others such as meeting locals and learning about their culture) of travelling in this way is the fact that it’s cheaper.

What pisses people off is not that you’re getting free accommodation, but rather the fact that some surfers act entitled or aren’t grateful to their hosts.

You should couchsurf with someone being fully cognisant of the fact that this person is willing to let a complete stranger stay in their home, and in many cases even cook for you, show you around or pick you up from the airport or train/bus station.

Now, that is super nice. Heck, for many of us, our own relatives would not even do as much. So, you’d better ensure you do not treat your host’s home like a hotel.

Leaving the space clean and tidy is the bare minimum you should be doing. It’s also nice to show a bit of appreciation by cooking a meal or two, offering to chip in to buy groceries (especially if you’re staying for more than a few days), leaving your host with a postcard from Singapore or whatever. It’s also a kind gesture to treat your host to a meal if you’re eating out, since they are saving you so much money in the first place.

But okay, when you’re on the road that’s not always possible. The most important thing is that you respect your host and do your best to accommodate him or her, too.

For instance, some hosts will want you to leave with them when they go to work in the morning, so respect their time by not waking up late. And even if you’re tired, make the effort to try to connect with your host on a personal level. Nobody wants to feel like their surfer is just there for the free accommodation.

It’s not wrong to admit that couchsurfing is a huge moneysaver on your travels. But that’s all the more reason to be grateful to your host.

Have you ever tried couchsurfing? Share your experiences in the comments! 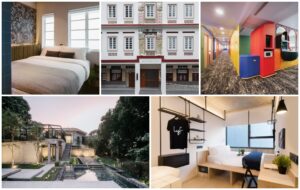 Travel
JR Pass Singapore – The Ultimate Guide to Japan Rail Pass Types & Prices
Sign up for our newsletter for financial tips, tricks and exclusive information that can be personalised to your preferences!