Wondering Where To Catch The Final Season of Game Of Thrones? Now You Have More Choices With HBO On Singtel

Winter is coming… but no, don’t whip out those puffy jackets you reserve for overseas trips. We’re talking about Game of Thrones.

The final season ever (sob) of Game of Thrones is about to start, so this is our last chance to revel in the glory and anguish of the series before it’s gone for good.

Previously, in order to get your GOT fix, it’s likely you had to either have a Starhub TV subscription or, like most people in Singapore, stream it illegally.

But the government has started to crack down on illegal streaming lately by announcing plans to ban the sale of media streaming boxes.

And let’s face it, having to pause your episode to let a video load is annoying af, especially when it happens just as someone is getting killed or seduced.

But now, there is a solution!

For the first time, Singtel subscribers get access to the suite of HBO channels. That means you get more options for where to watch GOT, as well as other series such as Westworld, Silicon Valley and True Blood.

Let’s check out the ways in which you can get your GOT fix. 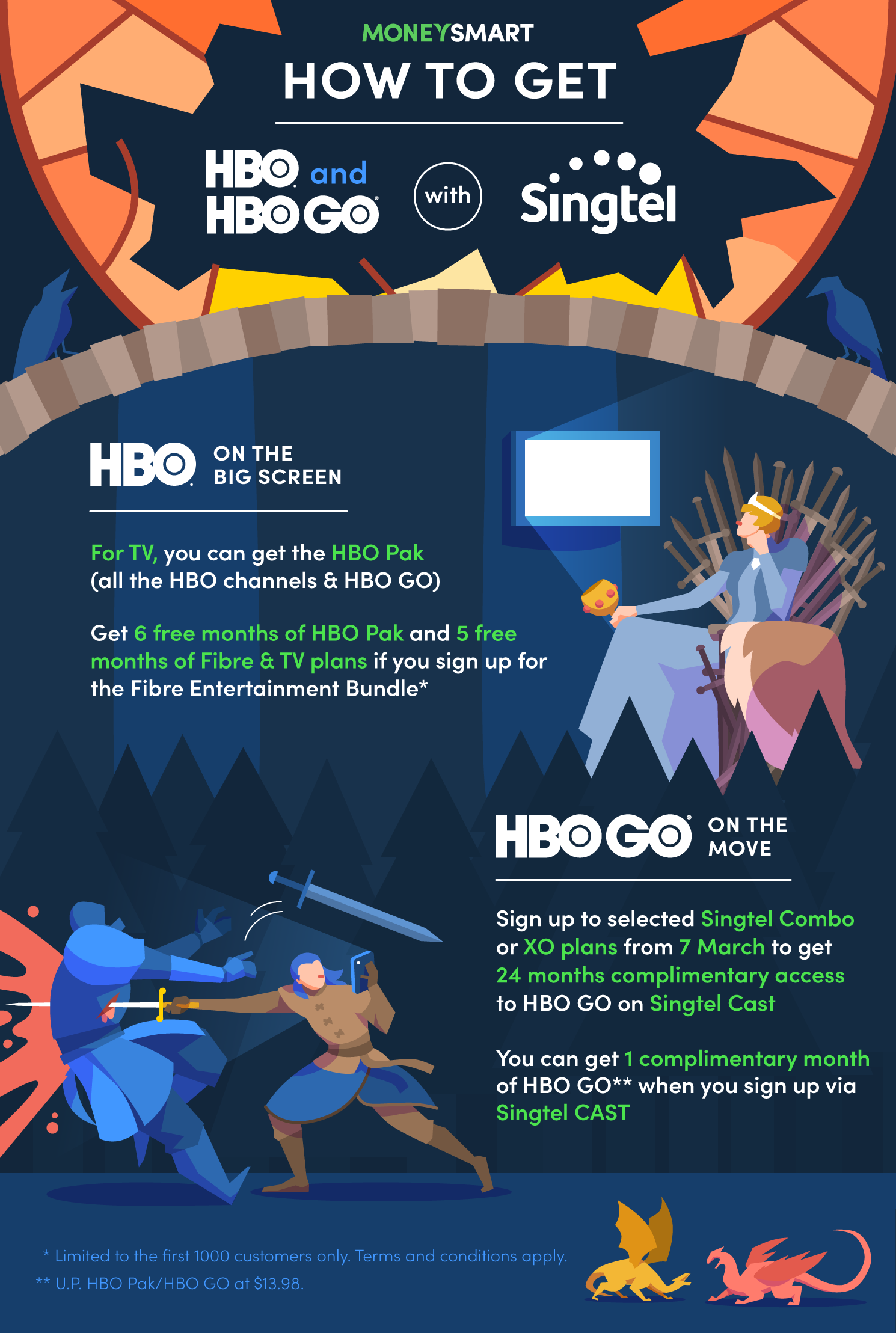 Watch Game of Thrones on TV with HBO Pak

Thanks to Singtel’s HBO Pak, you can now have access to all HBO channels, including HBO on Demand, HBO Hits, HBO Family, HBO Signature, RED by HBO and HBO GO.

Simply turn on your TV, navigate to channels 420 to 425 and commence your binge watching session!

Watch GOT on a mobile device with HBO GO

HBO GO is HBO Asia’s streaming service and lets you access movies and programmes on a mobile device. It is given complimentary to all HBO Pak subscribers with Singtel.

HBO GO is perfect for you if you prefer to be lying in bed than seated on a couch in front of the TV, as it lets you watch TV series on your smartphone, tablet or other mobile device using the Singtel TV.

When you’re done with GOT, check out other series and movies

With so many channels available through the HBO Pak, there’ll be plenty to keep you entertained in between episodes of GOT.

You get to choose from a plethora of HBO series including Curb your Enthusiasm, True Detective and the evergreen Sex and the City.

There are also enough movies to make a film buff weep. You’ll find anything from the latest, greatest blockbusters to cinematic classics. Ready Player One, Tomb Raider, Dawn of the Dead and Fargo are just some of the movies you’ll be able to watch at your next movie marathon.

In addition to HBO, only Singtel TV also gives you access to the entire suite of Discovery Channels and Premier League. You’ll have so much to watch, you might even quit surfing YouTube!

Don’t have a TV subscription? No problem!

Many young couples these days are forgoing the purchase of TV for their homes. That might have shocked people in their parents’ generation (how to watch drama serials?), but it really makes so much sense—more space in the home, no need to purchase a costly device.

Well, the good news is that your TV-less state won’t prevent you from watching GOT on your mobile device.

Singtel is offering 24 months of complimentary access to HBO GO on Singtel CAST with the Singtel Combo XO plan, so you can watch GOT in bed, on the toilet or on the bus!

Not looking for a mobile plan? Good news you can still get 1 complimentary month of HBO when you sign up to HBO GO via Singtel CAST. Singtel CAST lets you stream your favourite entertainment and HBO shows on the go, on any device, and without the need for any set-top box. No contract required!

What’s more, if you sign up for the Fibre Entertainment Bundle from 1 to 15 March, you get 6 Free months of HBO and 5 Free months of Fibre & TV plans.

So, you’re all set! Prepare for the final season of Game of Thrones in three easy steps:

Need more info on how to get Singtel’s HBO Pak and HBO GO? Dial 1609, visit any Singtel Shop or log on to singtel.com/HBO.

Can’t Live Without Music Apps Like Spotify? You’d Be Silly Not To Sign Up For Singtel Music

Are You an Apple Fan? Consider Heading Straight to Singtel for Your Apple Needs